Sam Carwenne Oxby is a former Central Saint Martins student and prominent member of the Stop The War Coalition. Having qualified in graphic design at the Croydon School of Art and the University for the Creative Arts in Epsom, she worked for a marketing agency where she designed logos for Smirnoff.

After completing an MA in Design Studies at Central Saint Martins, Sam joined the Stop the War Coalition. Artefact sat down with her to discuss her journey.

Why did you choose Central Saint Martins and what did you study?

I did Design Studies, which is currently called Applied Imagination. I had already studied for a Higher National Diploma in graphic design and worked professionally as a designer, and I had more questions. There were things I wanted to investigate further, especially having experience within the industry. I always wanted to go to Central Saint Martins because of its reputation. A friend of mine had done the course and she had said good things about it. I looked at Kingston University London but it didn’t seem as creatively exciting, innovative or exploratory. What I liked about Saint Martins is you can do whatever you wanted.

They were just fantastic. I was working in an integrated marketing agency and one of their clients was Smirnoff and that’s how I did the work. I thought it was a very creative experience, at college you think I can do this now but I’ll never be able to do this in the real world, some people will tell you that as well. I went to Smirnoff as a freelancer for a couple of days and I didn’t really know what I was going to be working on, I was told it would be a whisky brand and when I got there they were very fun and nice people. When I was given the Smirnoff brief it was a bit scary but once I got over that it was brilliant.

What is the Stop the War Coalition and how did you get involved?

I got involved because initially I was on the big march of 2003 and so were my whole family. I was quite busy at Saint Martins doing my MA, but when I finished I thought to myself ‘What do I really want to do now?’ I was still very fired up about the war, I did some research and what I thought were just placards on the day saying ‘Stop The War Coalition’, I realised it was an actual organisation. I thought ‘brilliant’, so I phoned them up and went to one of their meetings, and after a meeting I went to the convenor and told him I wanted to do graphic design. Not much happened after that, but on another occasion I wanted to buy a ticket, because they were chartering a whole train up to Manchester to a demonstration. So I went to their office to buy a ticket and I had my portfolio with me and while I waiting for my ticket to be processed I spoke to one of the guys working there and I said ‘I would like to help’. He looked through my portfolio and said ‘we can definitely use you’. 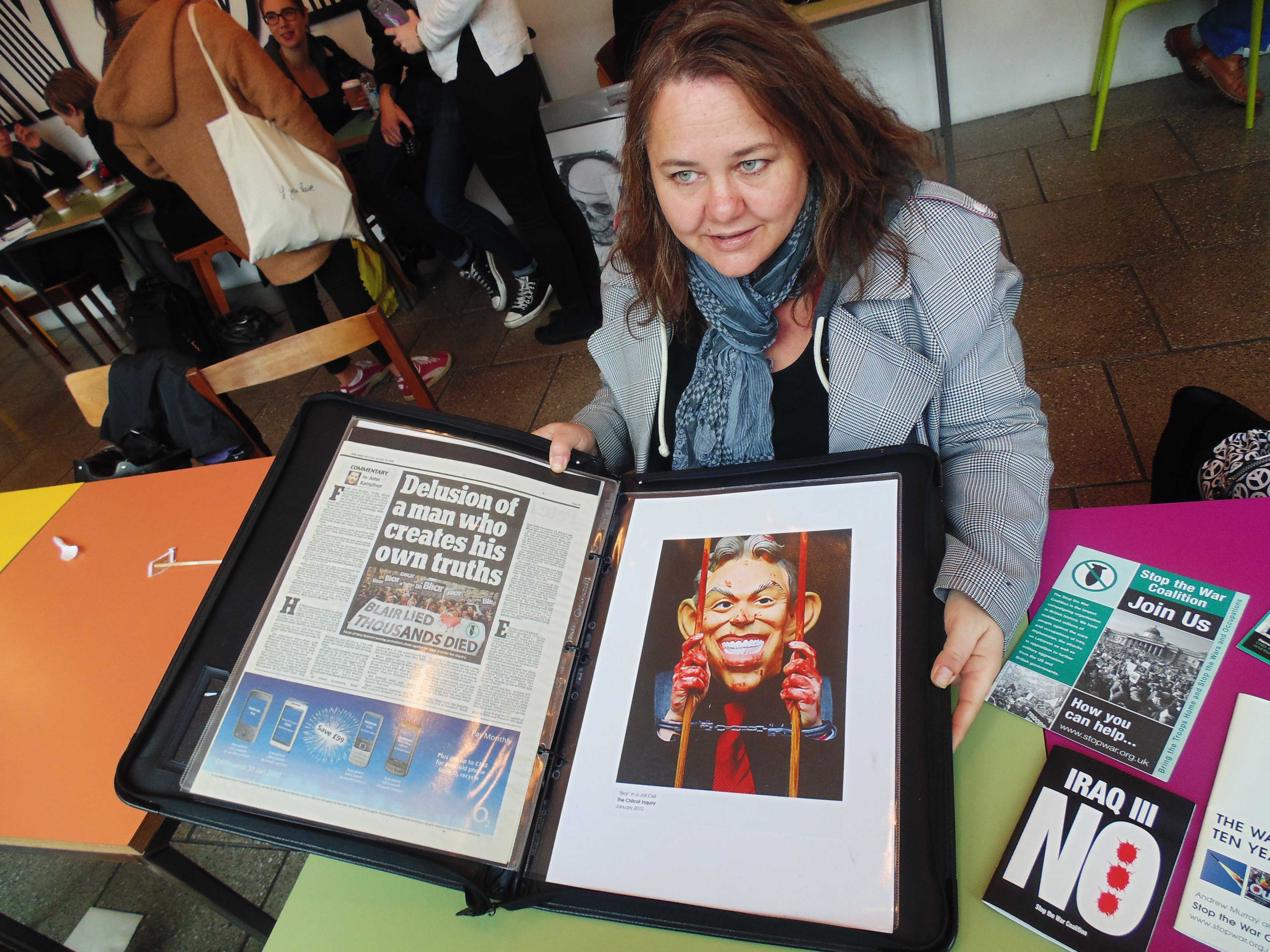 In 2003, Britain went to war with Iraq, under Tony Blair’s administration as Prime Minister, to support the American-led coalition in finding weapons of mass destruction. After receiving widespread backlash, the Iraq Inquiry, commonly known as the Chilcot Inquiry due to its chairman Sir John Chilcot, was set up in 2009 to investigate the role Britain played in the Iraq War. What actions did you take in response to the Chilcot Inquiry?

[Stop the War members] are always interested in taking a creative response. They’re aware that if we have a stunt or something visual, the media itself will pick up on that, which can bring attention to our issues and get them into people’s consciousness. I remember when it [the inquiry] opened and we had Tony Blair, George Bush and Gordon Brown puppet faces carrying money covered in blood, there was quite a flurry. The reaction from the press was quite stunning, so we know it was worth doing that because quite often those images will go viral. When Tony Blair was due to appear we had a creative meeting about it. We had been calling him a war criminal and we wanted everyone to see him in that way, so by putting him in a jail cell, it’s the most visually striking image.

The day he arrived, we had the jail cell holding a Tony Blair puppet with blood on his hands and a huge banner which read ‘Blair lied thousands died’, which also had blood splats. We have a well-known artist called David Gentleman who has worked with Stop The War from the beginning, he had already created a style for us, which were very simplistic black and white fonts with blood splats, I made sure everything I did used those elements. Those images went everywhere even Australia.

Can you tell us about the book signing incident?

Tony Blair wanted to sign his book The Journey in Waterstones in Piccadilly and Stop the War supporters in Ireland had staged a street protest, so there was already a fear from his side of what we were going to do – if he was going to go ahead with the signing. We started planning a response and publicising quite a lot. In Richmond we staged a similar stunt to a previous one but in this case, we had our own book about the Iraq war. It was our version of the events and we had a fake Tony Blair signing the book with a thumbprint of blood and we did this in local Waterstones shops. I remember management saying we couldn’t do this in front of their stores, and I responded with ‘if you’re an independent book seller and this your main source of income I would move, but to be honest you’re not going to suffer from this and it’s our right to stand on a public highway’. It’s quite empowering when you find out your rights because you can do quite a lot. There was a rumble going around Waterstones and eventually management cancelled the book store event because they knew the repercussion.

Then Blair proposed a launch party at the Tate and we started making noises about that. Some artists who supported us joined in such as Vivienne Westwood, and Tracey Emin came forward to support us. We also did the same Waterstones stunt outside the Tate, if the party had gone ahead we were going to put the Tony Blair puppeteers in the pop art department, so as he was walking through to the party room, we were going to do really surreal Tony Blairs. So it would be his worst nightmare, we didn’t get as far as that because the party was cancelled. Later we did a press call about how we managed to stop him doing the party.

What are your thoughts on politics now?

I get excited about movements like ours and The People’s Assembly Against Austerity, which bring a lot of people together and you get a mass movement over an issue. When people take power, quite often these movements like the Suffragettes do take years, but eventually these movements do win. It can be slow but it’s a question of perseverance. I get excited about that type of politics rather than party politics. 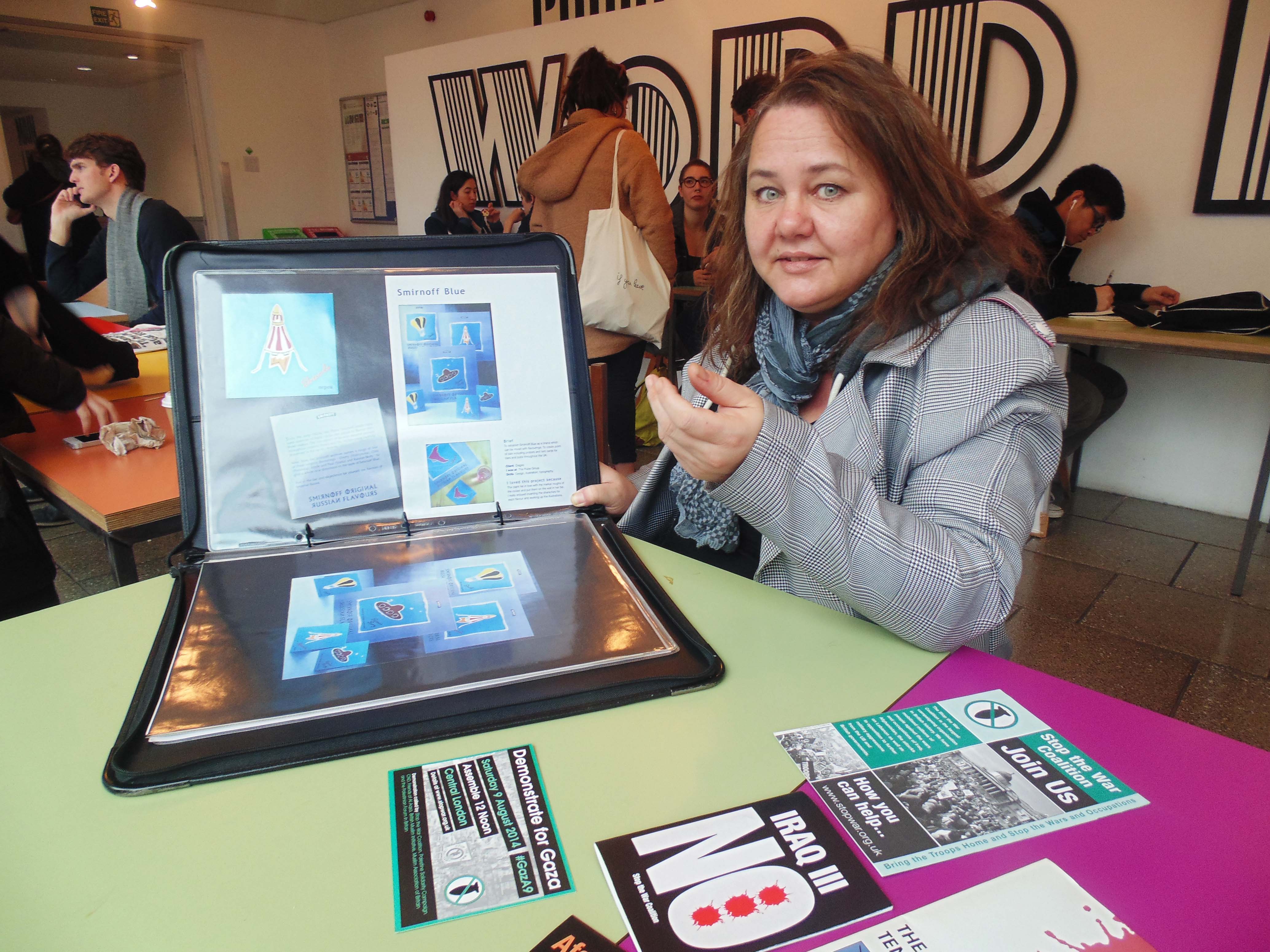 Sam Oxby showing designs she made for Smirnoff brand

What are your thoughts on the Counter Terrorism and Security Bill proposed by Home Secretary Theresa May? The proposed bill would require universities to ban lecturing by anyone considered to have extremist or radical views.

I’m very suspicious on the words being used. I’m referring to the rhetoric which came into play when George Bush said “You’re either with us or against us”. If that’s right then I’m a terrorist because I’m not with him. The very next day after 9/11 I remember reading a headline which said ‘It’s War’ I remember thinking ‘already?’. It took them 12 hours to decide that. That sort of talk is very dangerous, because it has an effect on people – they are basically saying if you don’t think our war is right, which will kill a lot of innocent people in Afghanistan and prevent further wars happening, then you are also a terrorist, which isn’t the case.

When governments use these words I wonder what their real are intentions are. In Paris in 1968 there was a huge student rebellion – I’m sure all the tutors were involved as well. Universities were a place of great change. When you say extremists, people think of a suicide bomber, but that is long way from a person who disagrees with what the government believes in.

What is the best way for students to express their opinions and bring about change?

The answer is solidarity, they can ignore one or two of you, but if the college gets together to make a statement, they will have to think about it. Students pay as well and you are also customers so you have more clout than before. If you feel strongly about something you need to get people behind you and be organised and create a movement and publicity. Start to protest and create posters and placards. In an art school there is probably a whole new set of ways to bring about change. Students should constantly be thinking of new ways to express themselves. Students are paying, so actually you’re customers.