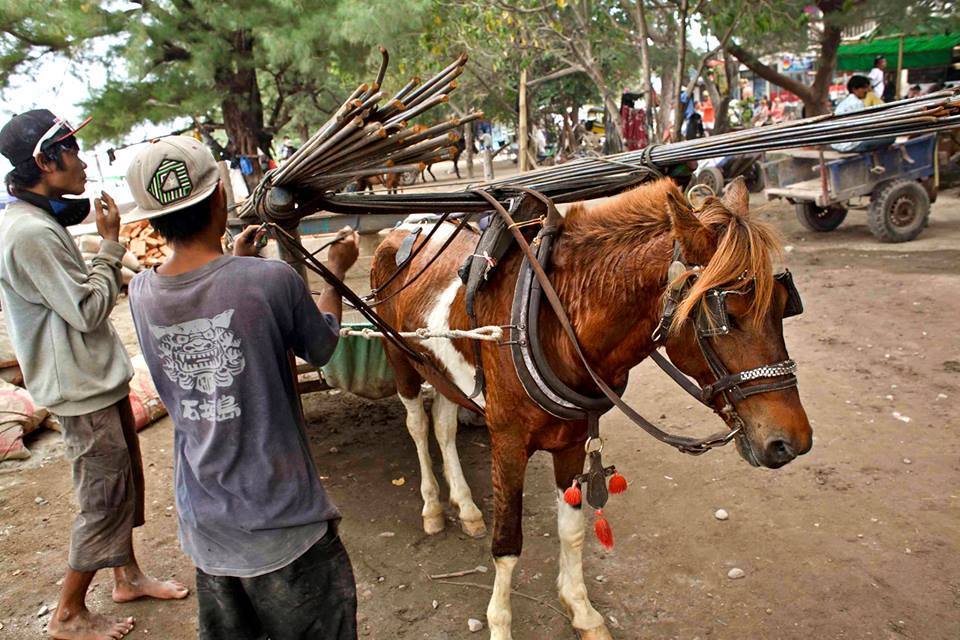 The Indonesian Gili Islands are an archipelago of three small islands: Gili Air, Gili Meno and Gili Trawangan. With their white sand beaches, crystal clear waters and lack of motorized transport, the Gili Islands are tropical paradises to many. I decided to visit Gili Air, the second largest of the three. However, I found myself having to end my trip earlier than planned because of what I had witnessed.

To get to any of the Gili Islands one needs to catch a boat, preferably from the harbour of either Lombok or Bali. At this point of my trip I have had enough of hectic Lombok and decided to unwind at this place so many claimed to be paradise.

Together with locals, other travellers and a hefty amount of water, beer and additional supplies, we set out to sea. Twenty minutes later, I stepped foot on Gili Air. As the humming of the boat engine ceased, I heard the jingling of bells, rattling of harnesses and heavy footfalls of horses in the sand. “Cidomos” came to mind: I recalled reading about these – carts pulled by horses, serving as the only public transport on the islands.

In the corner of my eye, I saw a row of horses. There were probably thirty of them, standing with their heads bowed to the sun. As I went beyond the hectic harbour and approached the main road, I got a closer look at the horses. It turned out that they were more like ponies. As an animal lover, I was excited to go stroke them. But as soon as I approached one, it drew its ears back in aggressively and started walking restlessly in place. It became clear to me that the pony was uncomfortable with human contact, so I stepped back and admired them from a distance instead.

Suddenly, thick, white thick foam was pouring out of their mouths. Having had previous equestrian training, I knew the foam indicated dehydration, so I started looking for any water source around but to no success. My gaze then fell on the ponies’ sweat. The apparent layer of sweat sat on the back, stomach and legs of the ponies like a hot blanket. My stomach wrenched as I realized how exhausted they probably were.

My thoughts were interrupted by a Russian speaking couple who had approached a driver and his pony, dragging what seemed to be heavy suitcases with them while carrying big backpacks on their backs. The driver offered 6 USD for a 10-minute ride. Watching watched them load their baggage into the cart made me sick. With every thud on the harness, I could see the pressure building up on the pony’s back. I could tell it was struggling, convulsively shaking its head in distress. But before I knew it, the pony was struck by a whiplash and off they were.

After an entire day of witnessing similar atrocities – ponies pulling numerous tourists and unwieldy amounts of construction material, food supplies and even diving oxygen tanks – I was furious. Not only were the ponies laboured throughout the day without water or shelter, they were also heavily beaten. When I returned to my hotel room later that evening, I investigated further into this and found an activist group who has evidence of serious neglect and abuse towards these ponies.

According to Gili Air Horse Carriage Support, most of the ponies are wild horses that have been captured on a neighbouring island, then trained to pull carriages. The ponies are believed to be “tamed” by being chased into a large hole, where they are kept until they are weak and easy to handle. Thereafter, they are brought to the island to start working. With an estimated lifespan of 1-3 years old, the horses are literally worked to death.

Their list recording cases of neglect and abuse is long and heart-breaking. Not given any form of shelter, the horses are left out in the sun even while waiting for the next passenger. The perpetual exposure to sunlight eventually leads to eye injuries and blindness. Sometimes the handmade parts of the carriage, saddles or other equipment used on the ponies can also cause painful lacerations that, if left untreated, will result in deadly infections. It is also not uncommon for owners to leave their horses strapped to their carriage even after their shift, permitting them no rest as they are left to stand throughout the night.

But what I had witnessed and read was hardly new at all. There has been uproar from countless locals, tourists, restaurants, hotels and activist groups for several years. Even so, little has changed since. Femke Haas, employee at Jakarta Animal Aid Network who started working with the horses as early as 2010, can attest to that.

“In 2010 I received a report from a caring tourist about a bleeding horse at Gili. Another about the abuse followed, criticising how the horses were beaten and made to stand in the sun all day. They also had no access to water and were being overloaded with people and heavy luggage’s,” she said.

Another tourist, Leslie Zeder, who had travelled to Gili Trawangan, had confronted a similar situation. “I witnessed horrendous conditions. The poor ponies are hooked to their jingling cart 24/7, treading on roads that are badly maintained, with loose sand and shattered glass scattered all over. They also have no paddocks to graze on (I rode a bike around every nook and cranny of Trawagan in search of one). Although I did discover find a decrepit tiny stable on Trawangan, it was so small the ponies could only stand still. I have not seen hay anywhere so I have no idea what they are fed either.” 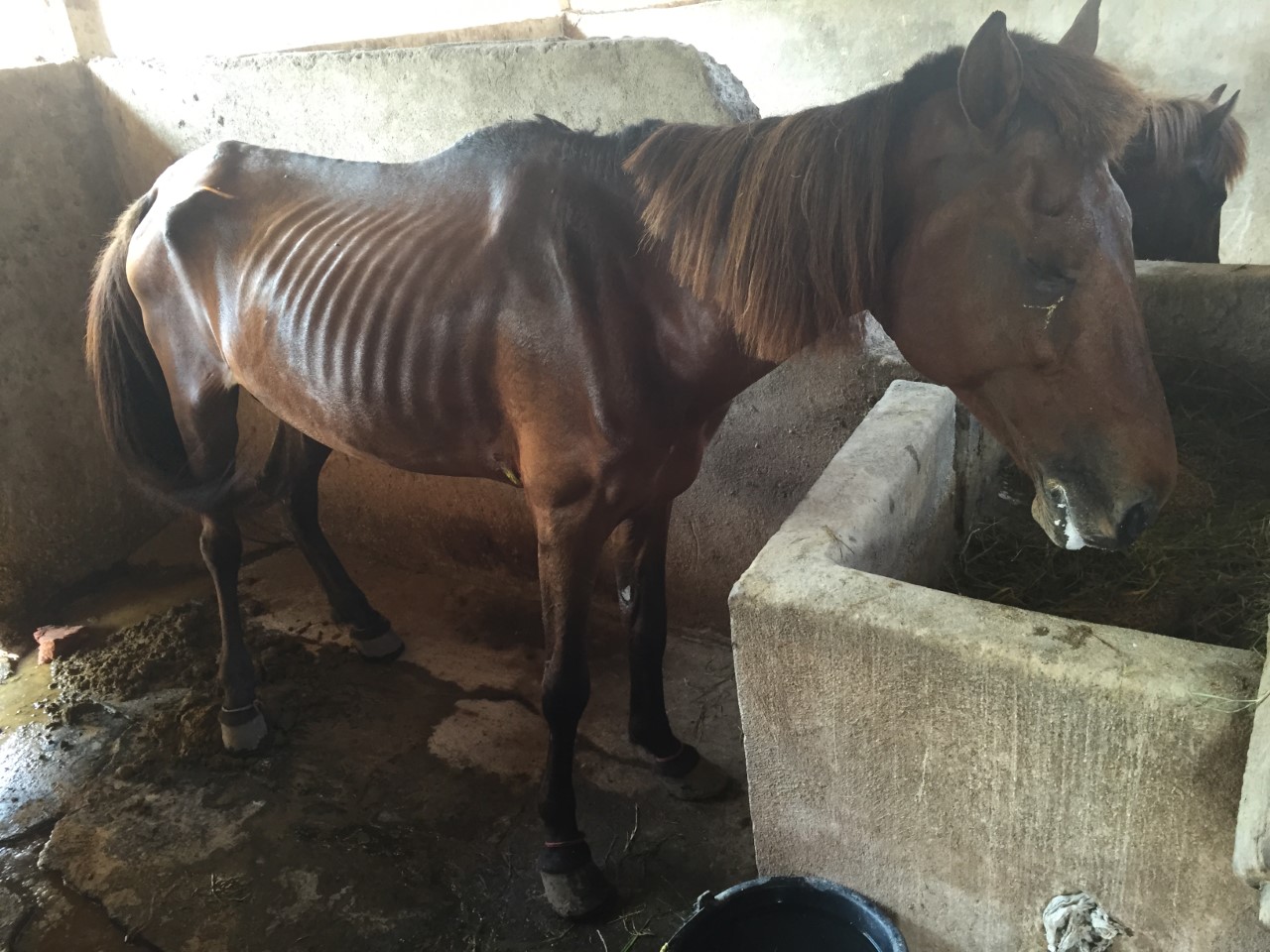 It’s not hard to believe how little has changed. But efforts have indeed been made to alleviate the situation. Yet, not all horses on the Gili Islands share the same fate: only a fraction of them have received help in terms of proper food, clean water and medical attention. Not long ago, all the horses were served brackish well-water mixed with salt water mainly because clean water is expensive and most owners are uneducated. Now that activists bring a supply of fresh water to the islands, some of the ponies’ conditions and health has improved.

In spite of these efforts, the horse’s well-being ultimately comes down to the owner and how willing he is to care for his horse, according to Aussie Veterinarian, Kirsten Jackson. Kristen was first introduced to the Gili ponies in 2014 when she travelled to the island to organize free clinics for the horses. The medical clinics are still organized twice a year and offer free veterinary care, worming, farriery and dental treatment.

“Changing the attitudes of the drivers is still the biggest challenge to overcome. Trying to stay respectful, kind and positive to ensure that the drivers will continue to bring their ponies to the clinics and allow us to treat them can be challenging, especially when some clearly have no interest in its welfare. To some, the pony is just a piece of ‘equipment’ and when it is broken, they get a new one.”

Kirsten adds, “Although the overall attitude of drivers has improved, it doesn’t mean much to the pony who continues to be scalded by boiling water, which is poured over their back to ‘make them strong’, or having petrol, oil and boiling water scrubbed onto their severe leg laceration to ‘clean the wound’ (almost the entire skin on the leg ends up sloughing off due to this ‘treatment’).” Much more effort certainly needs to be put in place to educate owners in order to prevent such misguided abuse from persisting.

The most basic need for a horse is clean water and a paddock to graze on after a hard day’s work. According to Femke, the latter still doesn’t exist, at least not for the horses pulling rubbish on the islands. While it is one thing for a horse to be seen in the open, looking somewhat presentable and healthy, and another to hide away those rubbish-pulling, wounded ponies from the public eye.

“The rubbish-pulling horses are some of the hardest working ponies on the island. Ten ponies cart around 22 tonnes of rubbish per day during peak tourist season but they aren’t fed enough to be able to cope with the workload. When we were there in 2015, we were shocked at the state of the rubbish-pulling ponies and even saved one, Oscar, from being sent to the slaughter house,” Kirsten says. “Oscar is now happily living in a rescue centre.”

However, clean water, proper food and equipment only go so far to improve the welfare of these ponies. If ponies keep working up to 18 hours a day, and die before the age of 3, these resources are nothing more than a temporary solution. Moreover, the clinics done twice a year are only a band aid on a huge gaping wound. According to Femke, it is crucial to look for an alternative solution and fully replace the horses with something that isn’t as old fashioned as carriage horses.

“Solar carts would be the best solution. Welfare can never be guaranteed here as the islands simply don’t have fresh grass nor a fresh water source available. Also, no one is monitoring the welfare of the horses. The government doesn’t take action despite receiving thousands of complaint letters from tourists about the poor treatment of the horses.”

Would the horses really need to be laboriously toiled if it weren’t for tourists?

I was dismayed to learn that in addition to a government who had no rules or regulations in place, there is also a so-called Horse Mafia Network ruling the Gili Islands. They became more active around 2008/9 when the islands started to gain popularity amongst tourists and hotel construction was on the rise. As a result, horses were also used for lugging cement bags and other construction supplies. Many of the horses today are owned by a handful of affluent people who pressure the drivers to make as much money as possible out of the ponies. For them, it’s all about the profits they can reap from it.

What I couldn’t help wondering was: would the horses really need to be laboriously toiled if it weren’t for tourists? Equines no doubt have been used for labour since centuries ago, but for an island that is growing constantly economically, during this technologically advanced age, could certainly do without ponies. A lot of harm could be avoided if tourists decided to walk instead of taking rides on ponies. Obviously, the problem is much larger and complex than making these choices; but, it is important for us to realize that these businesses rely on the money of tourists: choosing to pay for a ride is as good as promoting the horrible abuse of horses who get worked to death for the sake of tourism.

However, if you do choose to use a pony (and this goes for any animal attraction in any country), Kirsten Jackson has some advice for you on how you – all of us – can do to initiate a change to the livelihoods of these ponies:

“My advice would be to think twice about whether you want to use a pony on the island and support their use. Please look closely at the pony and choose one that is in good condition, with no wounds. Check the legs, the strap that goes under the belly, the neck and the corners of the mouth: these are the most common areas to have lacerations. If people like us are taking notice and only choose to ride ponies in proper equipment and good condition, without wounds on them, drivers will be encouraged to provide better welfare for the ponies, giving them a greater financial incentive to look after their pony more carefully.”