Changing the face of animal activism

The Save Movement is a global network of activist groups who travel to slaughterhouses to hold vigils, bear witness and record footage of pigs, chickens, cows and other farmed animals being transported to slaughter. Their goal is to “raise awareness about the plight of farmed animals, to help people become vegan, and to build a mass-based, grassroots animal justice movement.”

The organisation appealed to me because of its message of non-violence and simple activism tactic; bearing witness. I decided to go to Manchester, the first of many cities in the UK to bear witness, and join a vigil. Manchester’s Pig Save has more than 17,000 followers on Facebook and the group has been organising vigils since February 2016.

I arrived at the slaughterhouse at 8:00am after having taken an Uber from central Manchester to Ashton-Under-Lyne. The slaughterhouse is one of UK’s number one “pig processors”, where more than 50,000 pigs are slaughtered each week.

On site, I was greeted by more than 20 activists, young and old, who were kind enough to brief me on the agenda of the day. Normally, the slaughterhouse takes in 15 trucks a day, but today, as it was a Sunday, there would only be four. 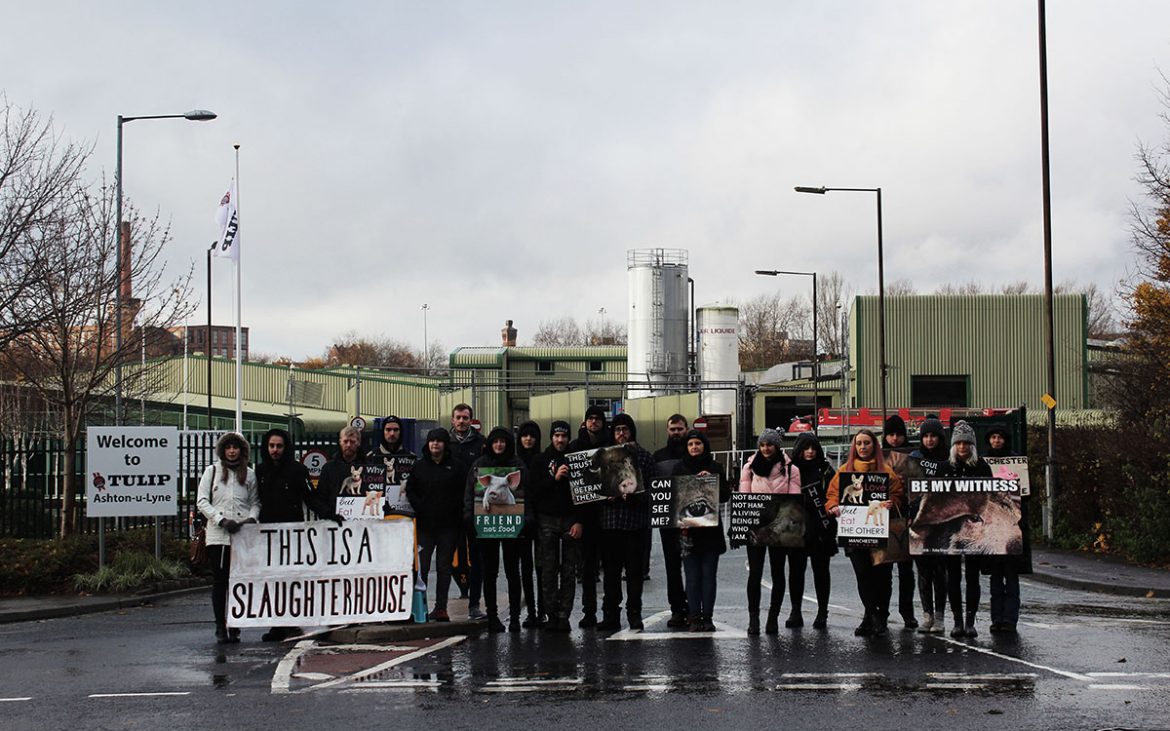 Moreover, the pigs wouldn’t be killed today. After having spent a night in holding, they would be stunned using carbon dioxide gas – a method that has been condemned as “distressing” as it can take between 33-47 seconds for pigs to lose consciousness. During this time, pigs are often seen jumping and gasping for air.

Each of us were handed placards with messages of compassion and veganism. We then positioned ourselves by the gates to the slaughterhouse and the roads close by, patiently waiting for trucks to arrive.

Interestingly enough, the slaughterhouse is placed near a busy road which allowed for supportive honks by cars passing by or people giving us the finger while shouting “bacon”.

At 9:00am, the first truck finally came rolling in. It was a big, red truck with gaps left for ventilation on the sides. Thanks to an agreement between the Save group and the slaughterhouse, the driver kindly turned off the engine as soon as it got to the gate. This meant we would have three whole minutes to spend with the pigs.

As we walked slowly down to the sides of the truck, I first noticed the overwhelming smell of faeces. When I looked through the opening I could see the pigs inside the trucks, crammed side by side, some of them with visible cuts on face, body and genitals.

By now I was worried that the pigs would be alarmed by our presence, but quite the opposite, many of them approached us in a curious manner and stuck out their noses as if they wanted to say hello. 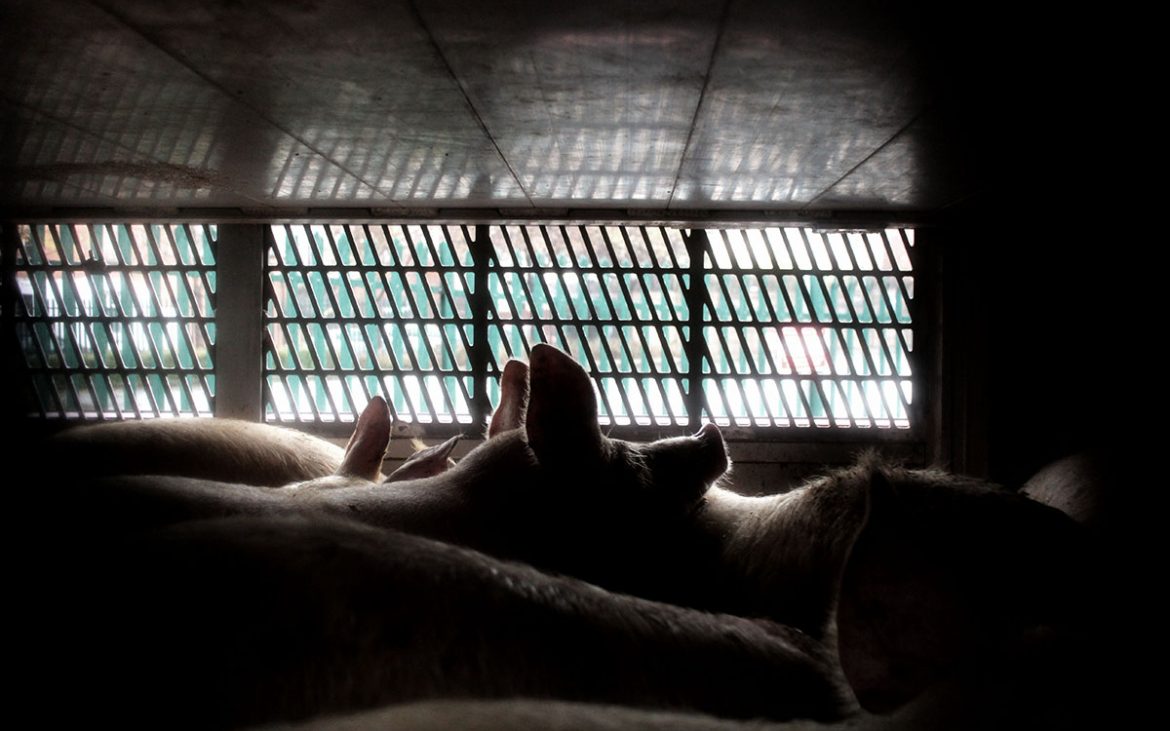 For many pigs, the first time they see daylight is on their way to the slaughterhouse. Despite their only experiences with humans likely being negative, the pigs still tend to look out for your hand and clearly like being touched – just like any pet animal would.

The look of sheer sadness in their very human-like eyes was daunting, and as I overheard another member of the group comforting the pigs, telling them she was sorry, my eyes started to well up. Before I knew it, the engine was turned on, the gate was opened and the truck drove away to its destination.

The purpose of the Save Movement is to use bearing witness as a form of advocacy and to bring awareness to animal suffering and promote veganism.

“The practical work of the movement is to bear witness to the animals, offer them comfort and witness testimony. Then use that testimony and bring what’s not in people’s field of vision into their field of vision,” says Alex Lockwood, co-convenor of the Save UK Steering Group and co-administrator of North East Animal Save.

The movement was first established in Canada in 2010 by activist Anita Krajnc. The sight of pigs in trucks travelling to slaughter prompted Krajnc to set up vigils and to found the first ever Save group ‘Toronto Pig Save’.

Anita later made headlines when offering water to pigs held in livestock transportation trucks – for which she faced thousands of dollars in fines and possible jail time. The case, called a “landmark” by animals rights organisation PETA, was eventually dropped after Krajnc was found not guilty for showing mercy to the pigs.

Today, the movement has 42 groups in the UK and more than 100 worldwide, with vigils held everywhere from Sweden to Hong Kong. Anyone can set up a vigil group in their own city with the help and advice from the Save Movement.

Some vigils have arrangements with the slaughterhouses which guarantee trucks will stop for a few minutes. If there is no arrangement, activists will have to make the trucks stop for them. This can be done with the help of placards that say “no hate for truck drivers” and “please stop for three minutes so that we can bear witness”. 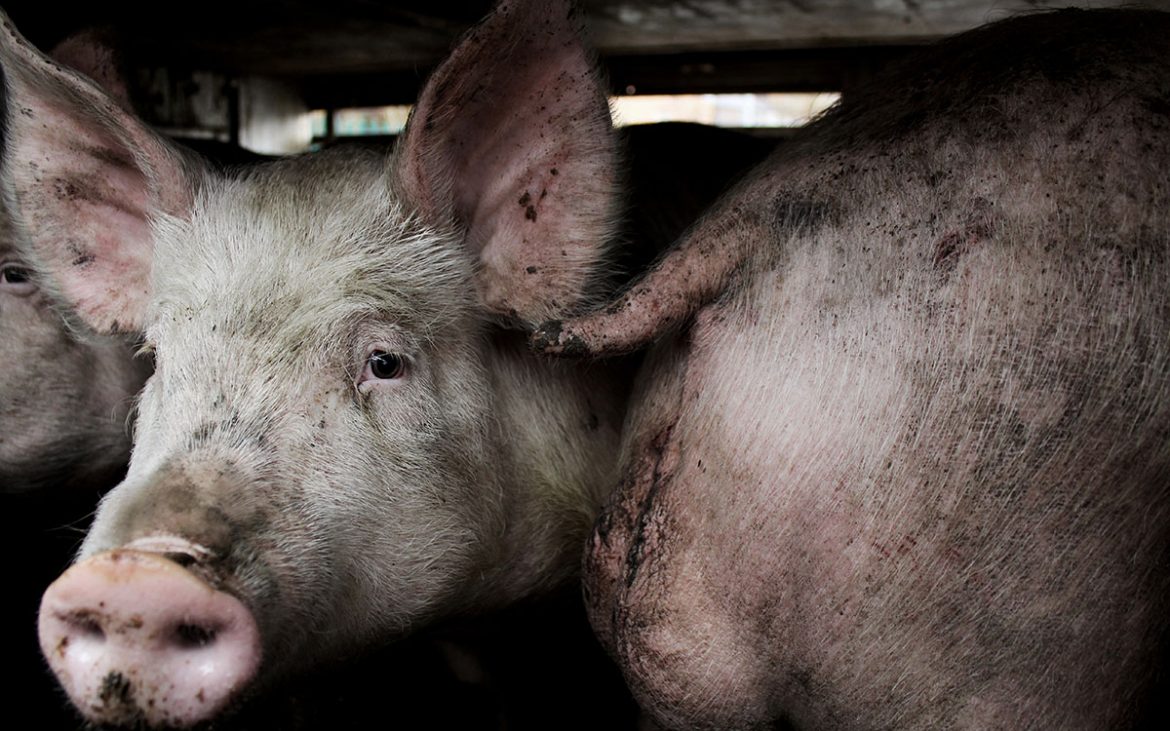 Liv Stevens, organiser of Guildford Animal Save, first got involved with vigils after having been vegan for six months. She felt like she wasn’t doing enough by leaving animals off her plate, and decided to make herself a “true vegan” by attending a vigil.

“I now arrange and attend other vigils around UK because I feel it is important to show people the truth of the meat industry; to see the animals they were before they become packaged up,” she says.

The Save Movement is changing the face of animal activism by giving people access to do something they feel comfortable with, explains Lockwood. He believes the simplicity of the movement is what is making it grow so rapidly.

“People think of animal activism quite negatively, like it’s people on the high street shouting at you, or protests for fur. The Save Movement is completely different from that. It’s transformed for those who want to be advocates for animals.”

Liv remembers seeing the positive impact of the Save Movement first hand when a slaughterhouse worker asked her how he could find vegan products in the supermarket. She however emphasises the difficult time one can experience mentally when attending a vigil.

“My worst memory of vigils is always when I can hear the animals crying out once they’ve gone inside. At Essex you can hear the pigs scream from several hundred feet away, and at Guildford when I hear the cows trying to resist getting off the trucks because they know what’s coming,” she says.

Being the ‘voice for the voiceless’ is in no way a new phenomenon; 1973 marked the beginning for animal activism in the UK, when the ALF (Animal Liberation Front) stole animals from laboratories, farms, circuses and other establishments.

The group also carried out hundreds of incendiary attacks, acts of vandalism and physical attacks in the name of animal ‘liberation’, for which the group was eventually classified a terrorist threat.

Throughout the 1980s, most emphasis of animal activism was on live experimentation and the fur trade. Since then, tactics have undoubtedly changed and today the traditional approaches include protests, petitions, leafleting, legislation and more direct action such as going undercover.

In addition to animals exploited in fashion and medical industries, the focus of activism today has also included the animals raised for food.

Veganism was once seen as an extreme, restrictive diet, but times are changing. According to studies conducted by the Vegan Society, the number of vegans in Britain has increased by 350 per cent in the past 10 years.

Around 542,000 people aged 15 or over – more than one per cent of the population – are avoiding food derived from animals, with overall sales of plant-based products being up 1,500 per cent. 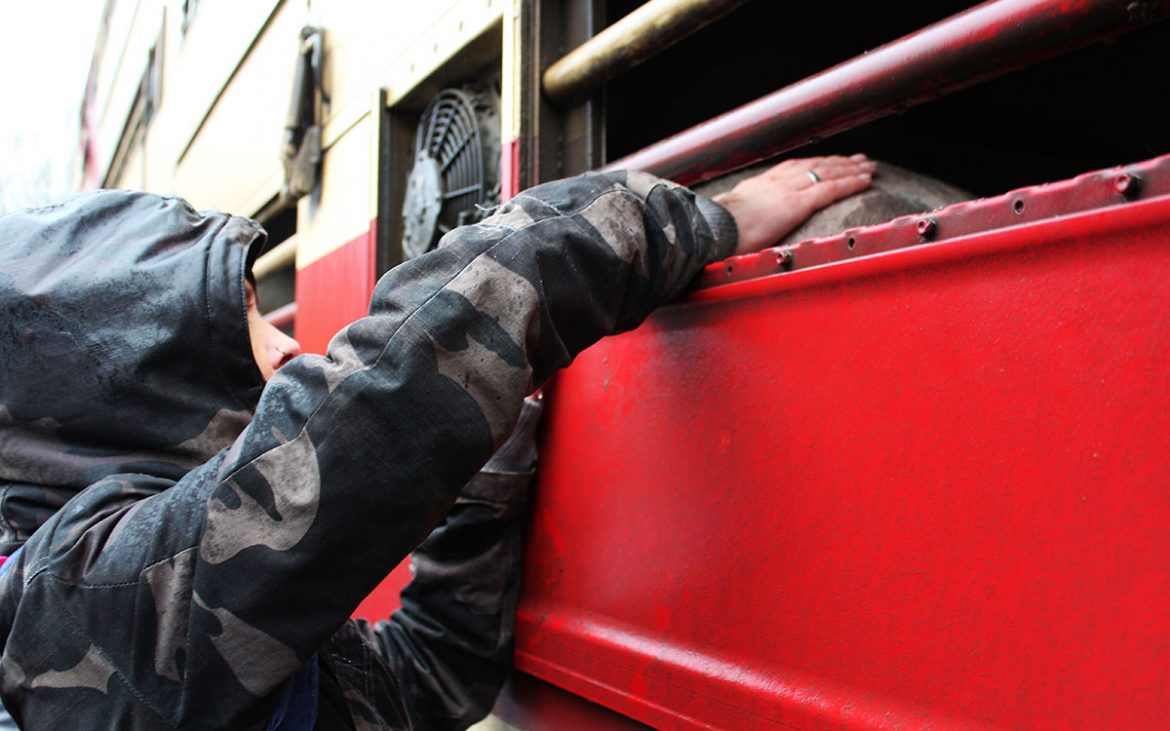 Despite its love-based approach, the movement has faced criticism from people in the industry. The National Pig Association claims its members “cannot sleep at night” because of Save Movement members having allegedly turned up at farms and slaughterhouses at night.

The group has also been accused of painting anti-Semitic graffiti on the walls of one London slaughterhouse. A spokesperson for the movement however assured none of its members had anything to do with it, nor does the group condone “discrimination of any kind, be it speciesism, racism, anti-Semitism or any other kind.”

In addition, The Association of Independent Meat Suppliers (AIMS) has met with the official National Counter Terrorism Police Operations Centre (NCTPO) team to discuss how to respond to the movement.

The movement’s approach is a non-violent and compassionate one claims Lockwood, yet the meat, egg and dairy industry are clearly feeling intimidated.

“When AIMS met with NCTPO it was a disappointing use of public funds. Surely today the police have much better things to spend public money on than investigating a compassionate movement that holds peaceful vigils outside slaughterhouses,” he says.

He further emphasises the obvious decline in meat and dairy consumption, which he believes should motivate AIMS to change their ways: “Outdated industrial practices are now coming to an end, and AIMS would be better off helping its members move towards more sustainable and ethical production, such as veganic farming or cultured meat,” he says. 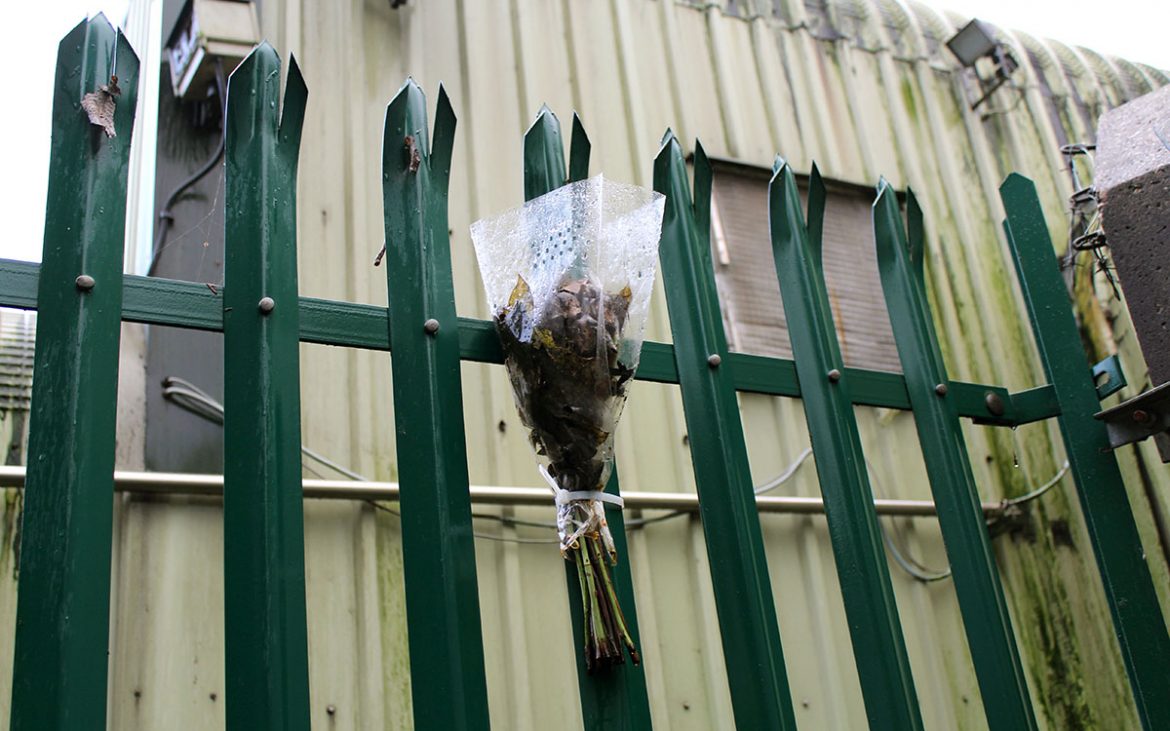 Despite their name, the Save groups do not aim to spare animals by saving them. But having attended a vigil I can see how the Save Movement could have a greater impact on animal welfare in the long run.

Everyone present (including myself) documented what they saw, and most of them will be posting their images online, telling friends and family about what they experienced, and maybe even convincing non-vegans to join them at a vigil.

“There hasn’t been a single social movement in history that hasn’t used bearing witness as a testimony to try and right the wrong,” Lockwood reminds me.

It all makes sense, as there is evidence that non-violent resistance is more than twice as effective as its violent counterparts. This may give the Save Movement advantage when it comes to thriving as a movement and actually making an impact in ways other activist groups have failed.

All images by Sara Silvennoinen