Out of Order: Molly Macindoe

The word ‘rave’ is bandied about pretty loosely these days. From the social media accounts of vapid EDM puppets and perma-tanned reality TV muppets, to the frappuccino-stained pages of the weekend broadsheets, everyone seems to be out ‘raving’.

Really? In the mainstream it’s a term that’s had all the Dionysian dissidence it evoked in the late ’80s and early ’90s diluted into little more than a parody of itself. In the underground however, the real ravers have stood strong.

Across the UK this summer in fields, forests, barns and quarries, people have gathered illegally in front of speaker stacks to dance and raise two fingers to the mainstream.

This winter, these same gatherings will happen in squats, warehouses and other redundant commercial buildings. A seasonal, hedonistic pursuit for some, and a committed lifestyle choice for others, it’s a counter-culture that Bristol-based documentary photographer Molly Macindoe has been at the heart of since 1997. 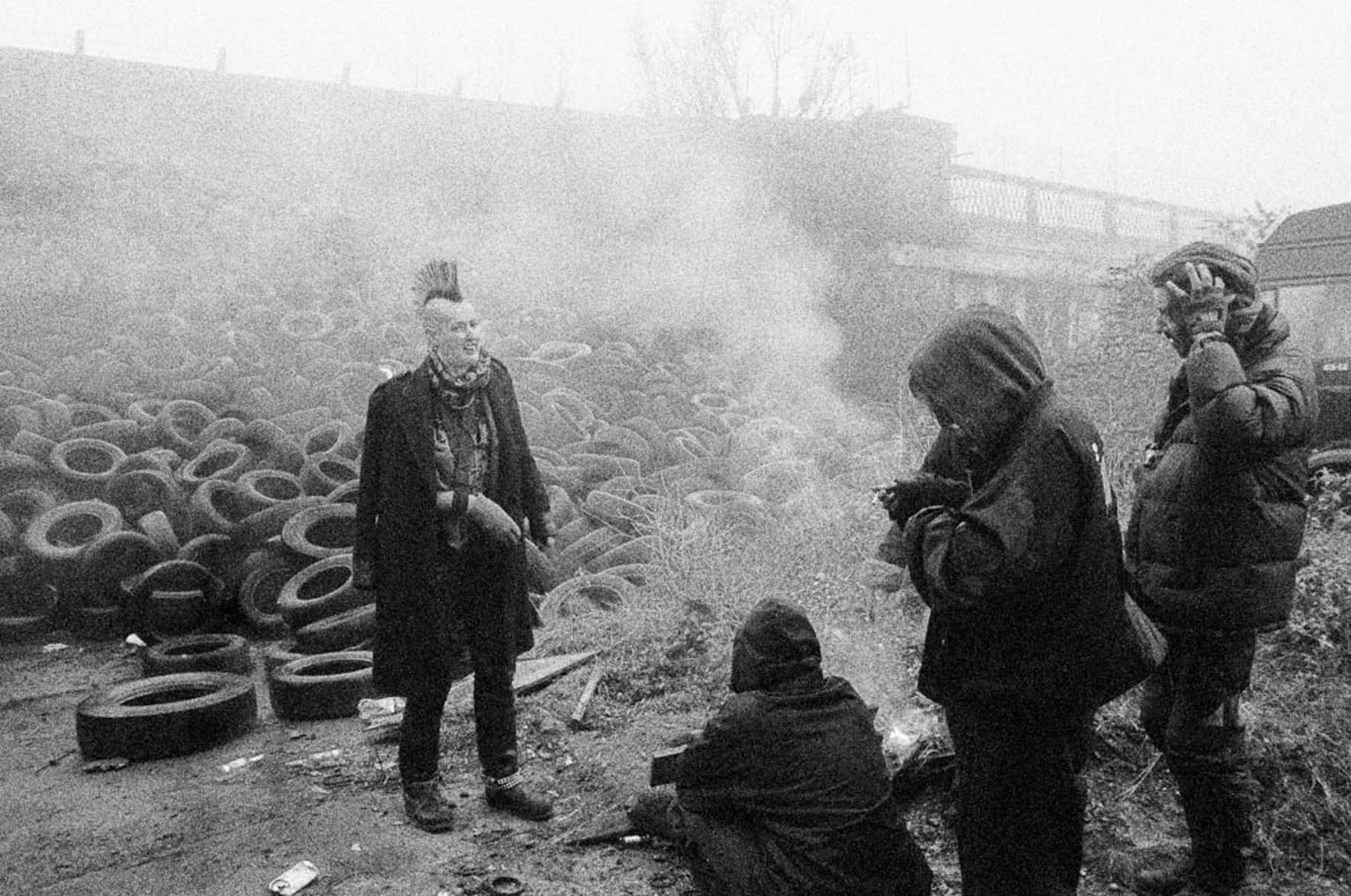 Influenced by a liberal, well-travelled upbringing, Macindoe discovered her passion for photography whilst studying art at college in late ’90s London. It was at this time that she was drawn into the other passion in her life – free parties:

“My first ever free party was at the Wood Green bingo hall in North London in 1997, my stomping ground. The instant I walked through the door I felt like I’d found my home. I was captivated and inspired by the art and community and finding people I could identify with. The unique beauty and honest self-expression to be found in the individuals and spaces has remained a constant photographic and personal fascination ever since.”

And so began a journey that’s seen Molly and her camera immersed in underground party culture for the best part of two decades, from Hackney Wick warehouses to European Teknivals and illegal raves in the Middle East.

Photographing the parties, places and people as a frontline participator, her work is stark, honest and humanistic, a rare and insightful documentary of a precious subculture. 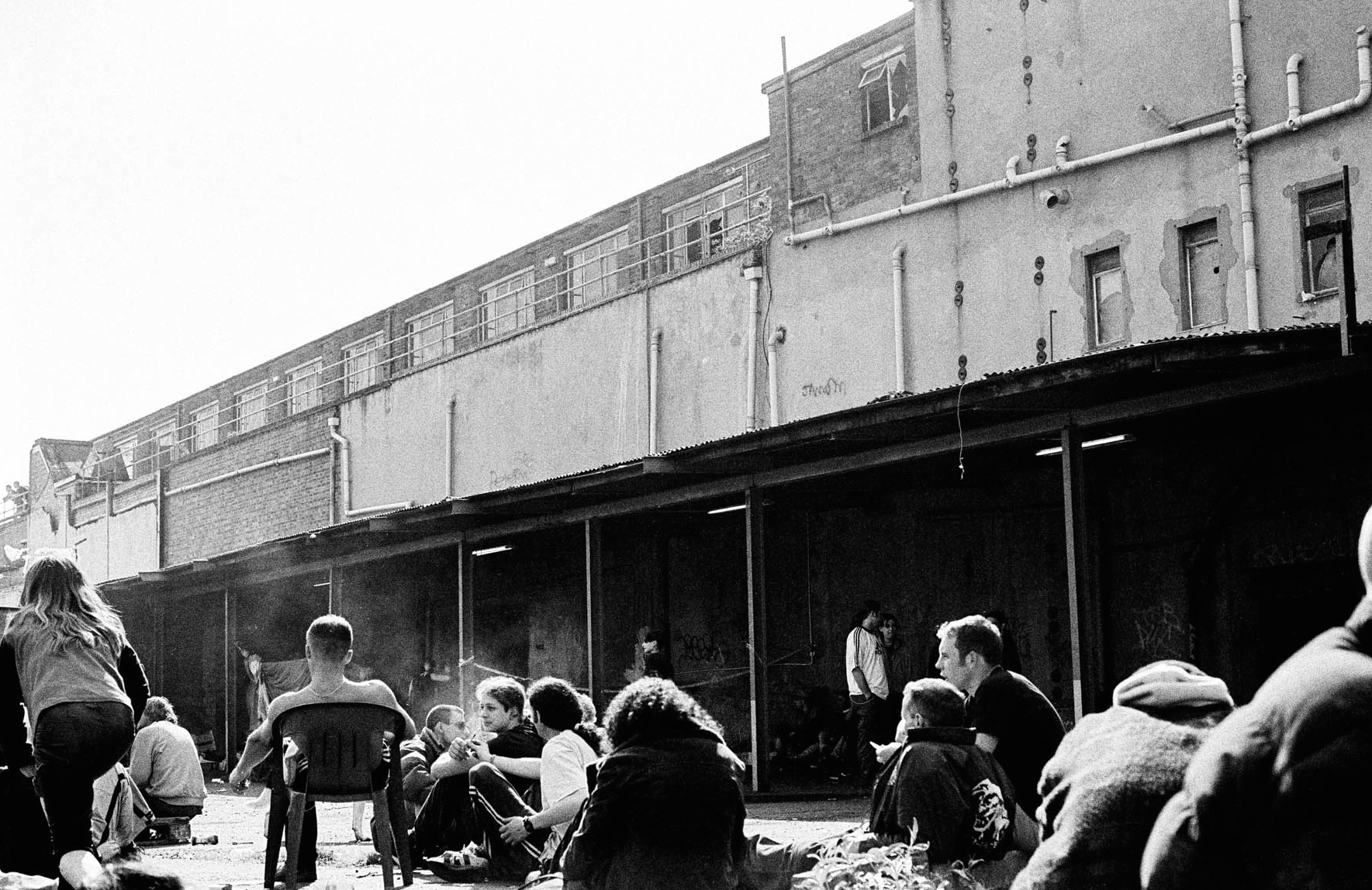 In 2011, Molly published Out Of Order, a collection of her party photography covering 77 events from 1997-2006. When the book’s first edition sold out earlier this year, she made the decision to launch a Kickstarter campaign to fund publishing 2000 copies of a second edition:

“I wanted to raise the money to reprint Out of Order using crowd-funding to try and avoid taking out huge loans like I did the first time round. I chose Kickstarter in the end because it better suited my plans to pitch this edition to a more international crowd, especially to the US market. It’s a good feeling to know that instead of approaching a bank to get funding or approach big publishers who would chop my book up, I was able to raise all the money with the help and support of a few hundred friends, family and fans of the work.” 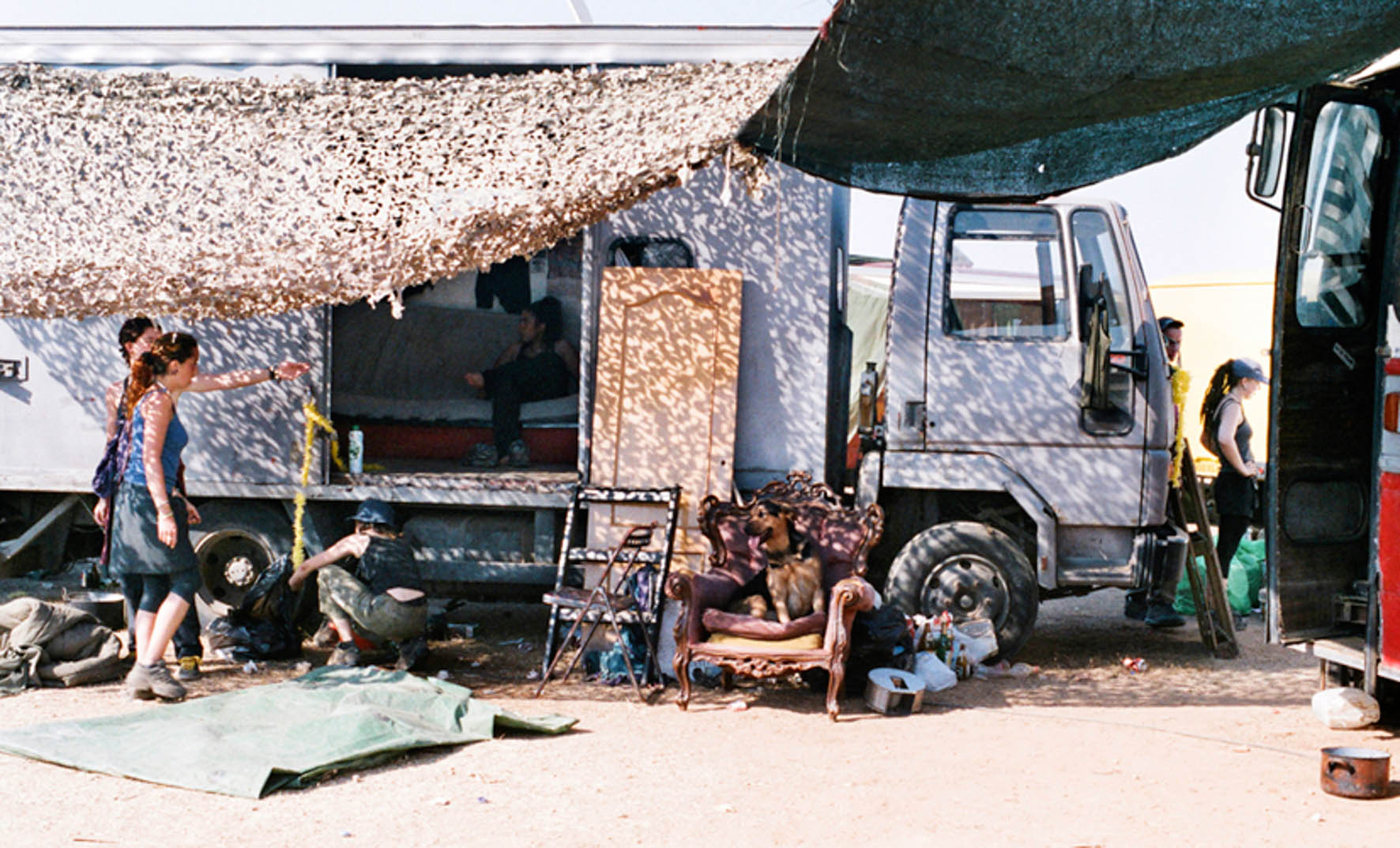 Having successfully raised the required target of £16,000 in July 2014, Macindoe began the process of publishing the second edition of Out of Order, a revised version but faithful to the book’s essence:

“It’s the same book with regards to the essentials,” she explains. “Still a 450+ page, ten-year photo diary of free parties. The cover will be hardback and possibly a different image though that’s a tough decision to make. Extra images previously unseen – and only recently discovered – and a few more parties will be packed into this edition.” 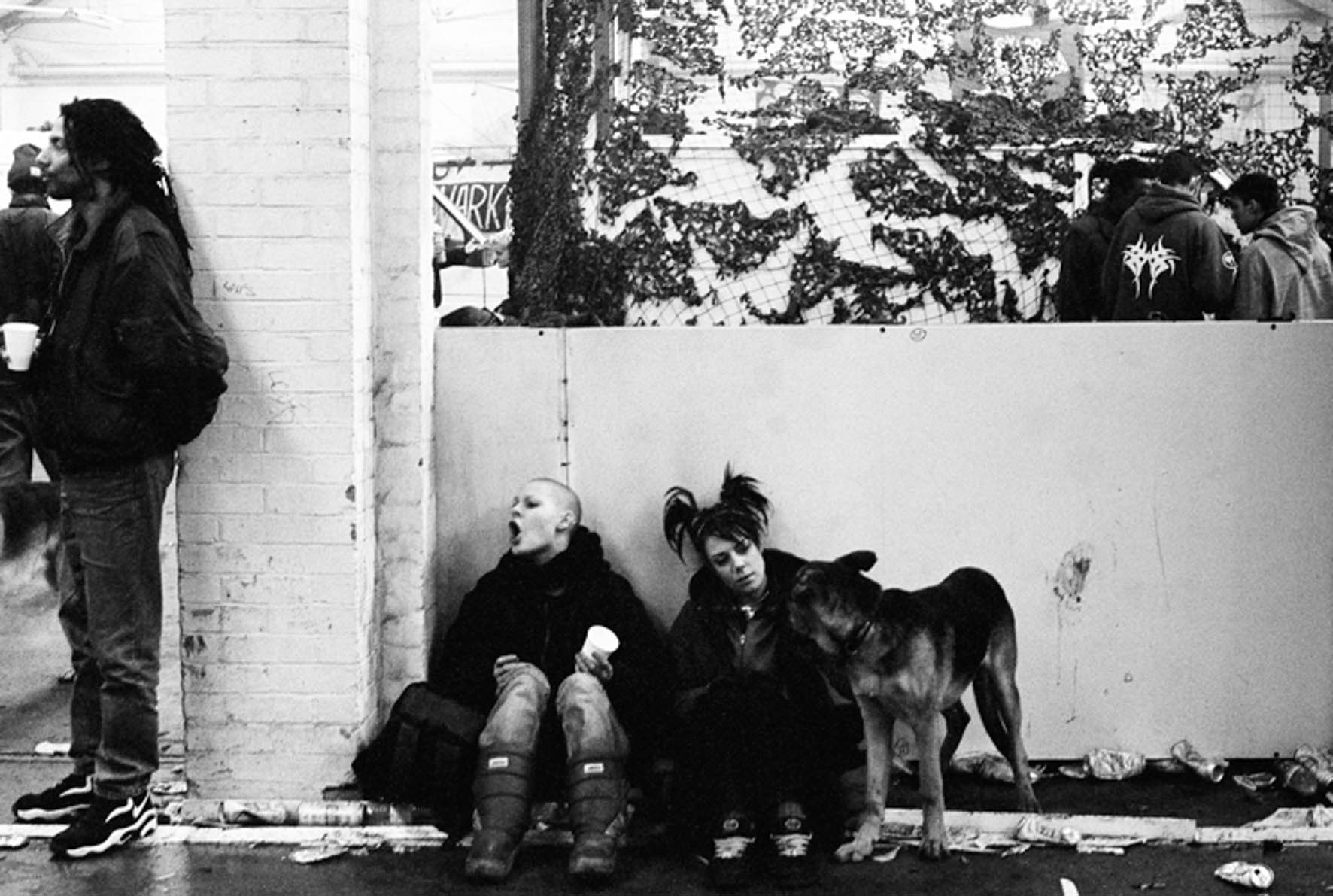 The book is a diary of Molly’s own experiences within the free party community as much as the many subjects she has documented. She describes one of the most memorable of these experiences being a late-morning conversation at a multi-storey rave on Commercial Road, East London, in 2000:

“I kept bumping into the same person, then struck up a conversation about photography and the ethics involved in documenting an underground, secretive scene, as I was still snapping and talking – this was 2000, when cameras were still a big no-no. He told me the best photo of a free party he’d ever seen was on the middle image of a record brought out by Crossbones Soundsystem a couple of years previous.

“The phrase ‘tickled pink’ probably applied to me then, as the image in question was mine, and was not only my first ever publication but the first party building that I had taken my camera to. This conversation was a much-needed encouragement to my shy younger self, who dreamt of doing a book one day but didn’t know how.

“Significantly, I punctured the conversation to snap a scene in front of us when a Dalmatian wandered into the room and it turned out that this very shot is still today – if I had to choose – my personal favourite of them all.” 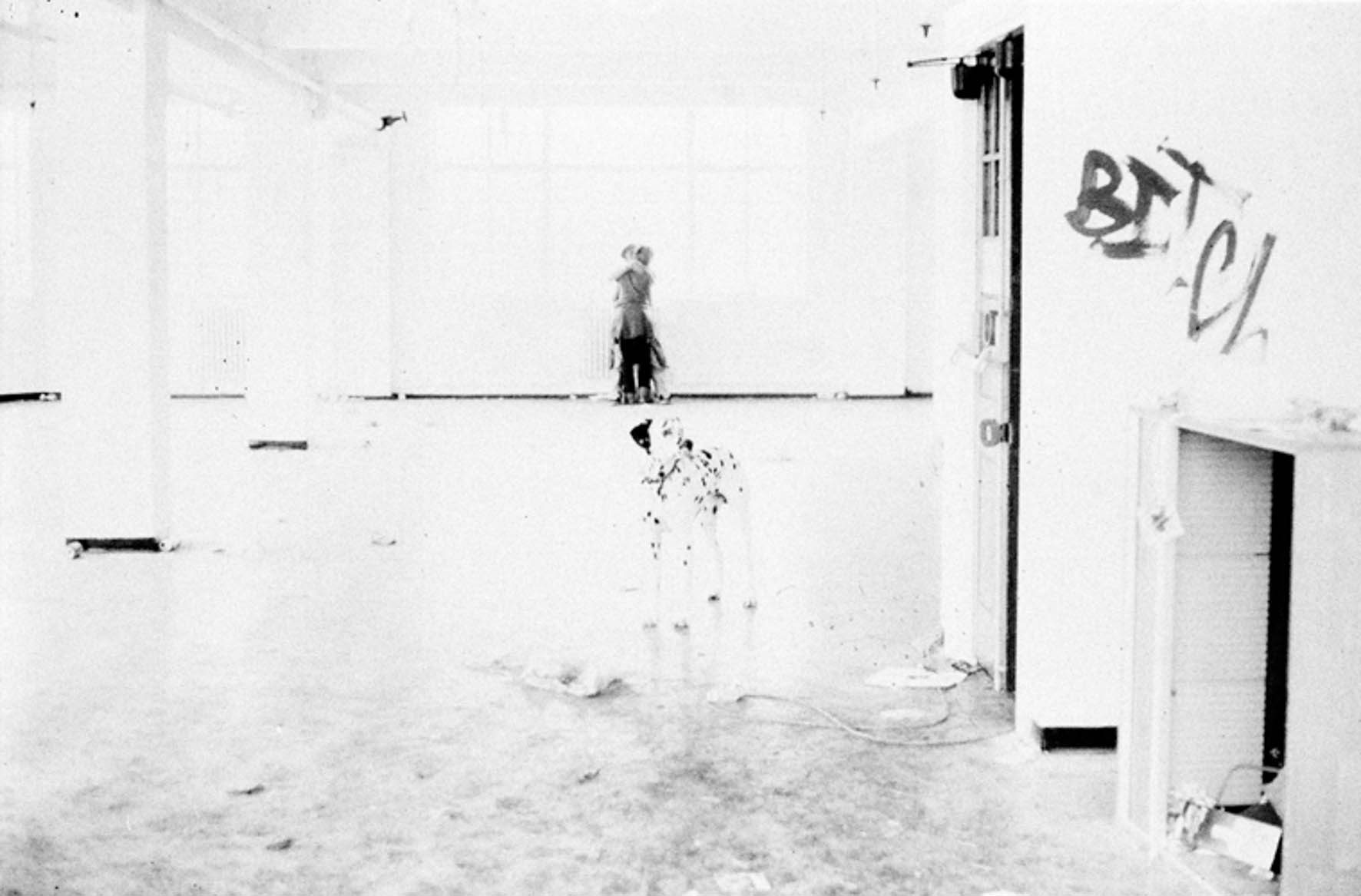 However, not all of her experiences have been quite so positive, with both the illegal nature of free parties and internal mistrust towards photographers at such events causing problems in the past:

“Once I was taking photos on the frontline of a violent clash between thousands of riot police and ravers at the notorious 2005 Czech Teknival and got hit by a flash bang grenade in my leg. I was also told off at an illegal Iranian party, because it’s extremely serious for anyone to be captured on camera. In the UK, police have seemed uncomfortable at me shooting them, but have never tried to stop me.” 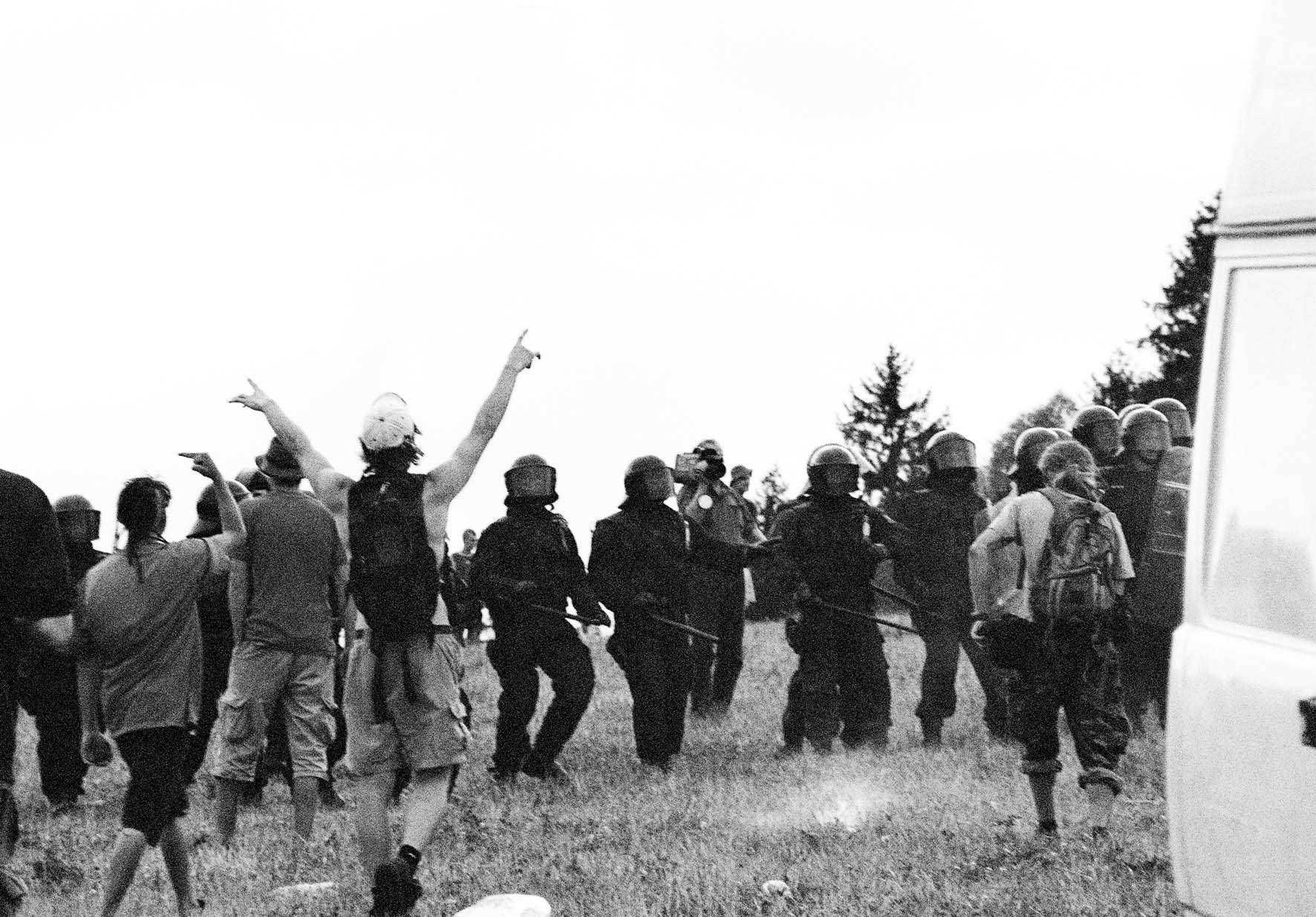 “In the late ’90s when I first started, nobody brought a camera to raves unless they were the press – usually out to find sensational, shocking exposés. People would often question me suspiciously as to my motives, and even ask if I was undercover police.

“Once I was told quite firmly to leave a particular room. The sound system owner had never met me and was quite angry that I was taking photos in his room. I tried to explain that I was a student, shooting in black and white, and that in the almost pitch-black conditions only silhouettes and lights would show up. He didn’t care and showed me the door.

“It took a couple of years or more to gain trust. Now some people have admitted they regret avoiding my camera having seen Out of Order and realising that it’s not sensational.”

The free party scene in the UK has long been defined by a cat-and-mouse war with the authorities, waged since the introduction of the Criminal Justice and Public Order Act in 1994. Despite no quarter being given on the legal status of the parties, Molly asserts that the scene’s appeal seems to remain as strong as it did 20 years ago:

“It’s not really changed that much, just different crews. Definitely less parties, but often more effort put into them because of the infrequency. As laws, governments and national financial situations change, so does the scene and how it is organised. However the culture has continued to survive and adapt since the late ’80s, having more than one heyday, and I believe this will continue.

“Also, as licensing and sound restrictions on pubs, clubs and festivals becomes tighter and tighter in the UK – both on a national and local government level – this has meant an increase in popularity for ‘free’ and ‘underground’ parties amongst the younger generation.” 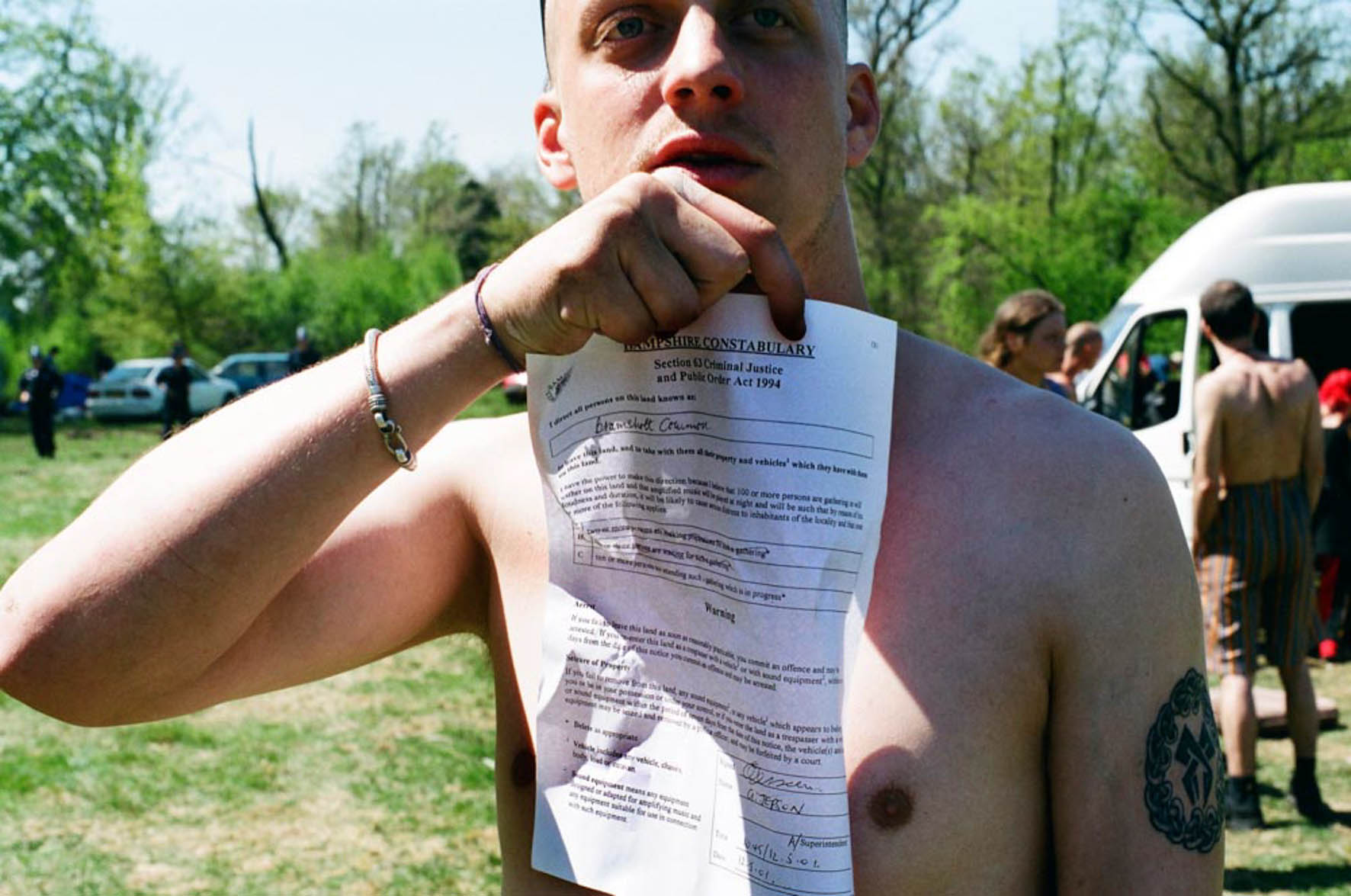 With underground parties still in good health, Macindoe’s work has never been more culturally and socially relevant, providing a defining retrospective of the free party scene for those who have participated in it, and an authoritative reference point for those who haven’t.

The scene’s appeal shows no sign of wearing thin for Molly, as she prepares to begin work on her next project, another photography book on underground rave culture that covers the years following Out of Order:

“The book will focus on the new generations of organisers and participants, plus familiar faces. Importantly, it will also cover free party and Teknival culture further afield: Bulgaria, Morocco, Lebanon, Jordan and Iran, and anywhere else I might get invited to in the near future – hint hint.”

The second edition of Out of Order has an expected release date of April 2015 – Click here to pre-order a copy and to check out Molly’s other work.