How protest has changed Hong Kong

A month ago, Hong Kong was still a place of cosmopolitan, booming finance – full of top professionals with almost zero unemployment – a place where protest was the last thing on people’s minds.

But since 87 shots of tear gas were fired on a late September evening, the city has changed overnight.

Jaw-dropping images have flashed on screens across London, the former colonialist government of this Asia-leading city. While many in the UK are aware of the protests in Hong Kong, very few actually know what the whole matter is about.

How did everything start?

The Occupy Central, Hong Kong’s branch of the protest movement, was originally an anti-capitalist movement mimicking NYC’s Occupy Wall Street in 2011 but died down in vain after only two months.

One year later, Benny Tai a legal scholar for the University of Hong Kong, suggested restarting the occupation as a political persuasion for a democratic universal suffrage, as the preparations of election reform bill was rolling on.

As a form of civil disobedience Occupy Central has exerted a direct influence on the city’s top financial and business district’s, is a ‘last resort’ to stir moral awakening among the ‘silent majority’, and to plea for an internationally recognised universal suffrage under extreme circumstance, Tai emphasised.

This means the Occupy Central movement has had the potential to start at any time over the last two years.

It turns out occupation has not taken place strictly in Central but has spread across multiple districts in the city, joined by an unexpectedly large number of people who were agonised by police who have been detaining students on strike and firing tear gas towards the peaceful protestors.

Tai and other leaders said they were glad the Occupy movement is now blossoming everywhere in a self-initiated fashion.

Astonishing facts about the Umbrella Revolution:

1. The most gentle protest 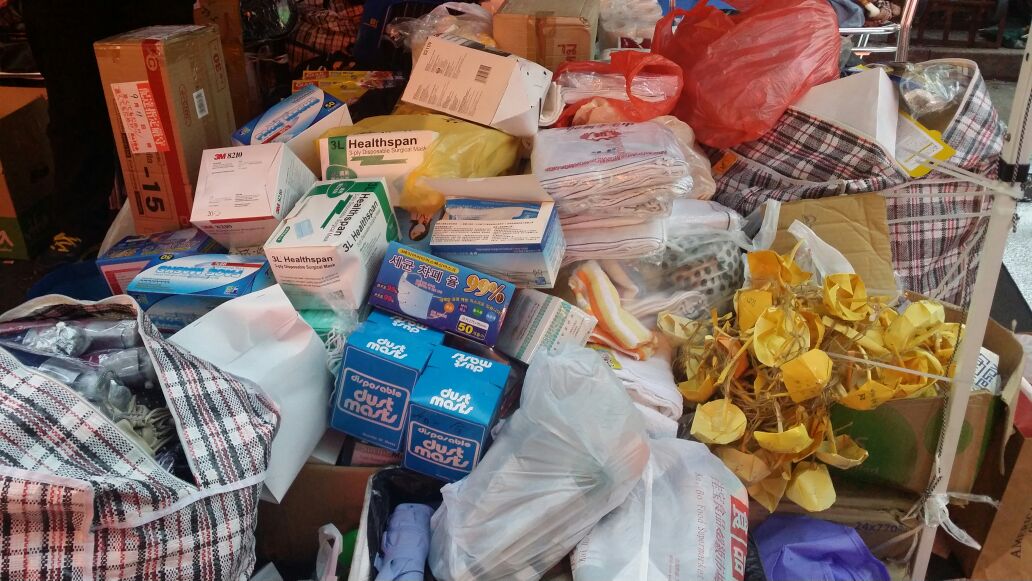 A resource booth in Admiralty (Photography by Winnie Lor)

You might have heard of it – protestors share food and supplies around, set up material booths, clean after themselves and send trash to recycling bins.

Lately some volunteers even set up study corners right on the streets to facilitate student protestors who are in hurry to meet deadlines and revise for exams.

Public toilets near the occupied areas are filled with sanitories. Above all else, the protesters thus far have been completely peaceful.

If we forget about the political reform for a second, this could be a festive city camping event. But in fact none of the occupants enjoy the process; they instead stay alert to guard their space since policemen could come to carry them away anytime.

Protestors keep reminding each other to keep calm and of their 100 per cent non-violent vow, despite repeated antagonisation.

These little well-organised communities have survived for over a month, and are still here, swelling to numbers in excess of 100,000. It couldn’t of happened without a huge degree of discipline and coordination.

The role of police in Hong Kong has remained unquestioned over previous decades, in which the city has seen very little protest.

On the September 27, eve of the ‘tear gas night’, the Hong Kong Police Force arrested a number of student leaders, including 17 year-old Joshua Wong – one of the key figures of the movement. He was kept in custody for over forty hours and rejected bail, a legal right meant for all non-criminal suspects. This is only the start of a series of unbelievable acts.

A few days later in Mong Kok, a freshly occupied district, mobs appeared to damage property and beat and harass female protestors, left unattended by a large group of police just beside. Many citizens were reportedly hurt during the suspicious chaos.

Hatred of police naturally bursted out on the internet, especially following the shocking televised footage showing seven police officers secretly beating up a Civic Party protestor in a dark alleyway just a few days ago.

Despite evident misbehaviours of the police, some groups started rallies and set up Facebook groups to show support to anti-occupants and the police, claiming policemen are just like any other normal citizens who execute orders accordingly.

Central arguments discuss issues like police becoming dictators’ thugs and the moral crisis of police, accompanied by activists’ wishful thinking that police should perform justified disobedience collectively like what the occupants are doing right now.

Rational protestors remind the angry people to stay focused on their demand for a full electoral democracy. ‘Police are not our targeted enemy. The government is,’ a protester told us.

Certainly Hongkongers’ favourite social network Facebook (no, Twitter is unpopular here) is the major platform of exchanging information and thoughts about prominent political matters like this.

Critics claim the radical side who keep quoting pro-democratic media to support the Occupy movement and debunk the police force are mainly students, young professionals and intellectuals; their counterparts are generally middle-aged with senior economic positions, civil servants, the elderly and ‘ignorant housewives’ who accuse the younger generation as naïve and impulsive.

Within the same peer group, opinions still divide greatly; and because of the fact that people are at similar ages from similar backgrounds, you judge them even harder if they hold a different stance.

In such a situation when everyone is madly striving to prove themselves right and the others wrong, bombarding debates happen on Facebook every minute, up to the point when someone can no longer stand the fight and click that fatal ‘unfriend’ button. Social media has become a defining element of this protest.

4. You never know what will happen

At this moment, roads are still blocked, shops are still closed – if the police take further action, more people will eventually back out, and if they don’t take action the protest moral will slip as time passes. Both camps are held in a tough deadlock.

After all the dramas taking place in Hong Kong over the past three weeks, no one dares to predict what will happen next. When will the occupation end? Who will concede first?

Not settling for less

The umbrella movement has broken the long-standing complacency in this city, making many reflect seriously about the future of Hong Kong.

In the end, even if the movement failed to change the electoral system, it has already changed many Hongkongers.

This music video, produced by several Hong Kong singers who aren’t afraid of being banned from the Mainland China music industry, shows the endearing peaceful side of the Umbrella Movement over the past weeks, which is exactly in line with Benny Tai’s initial call – “to occupy central with love and peace”.

Although the song is in Cantonese, it is definitely worth a watch to see the other side of this city: 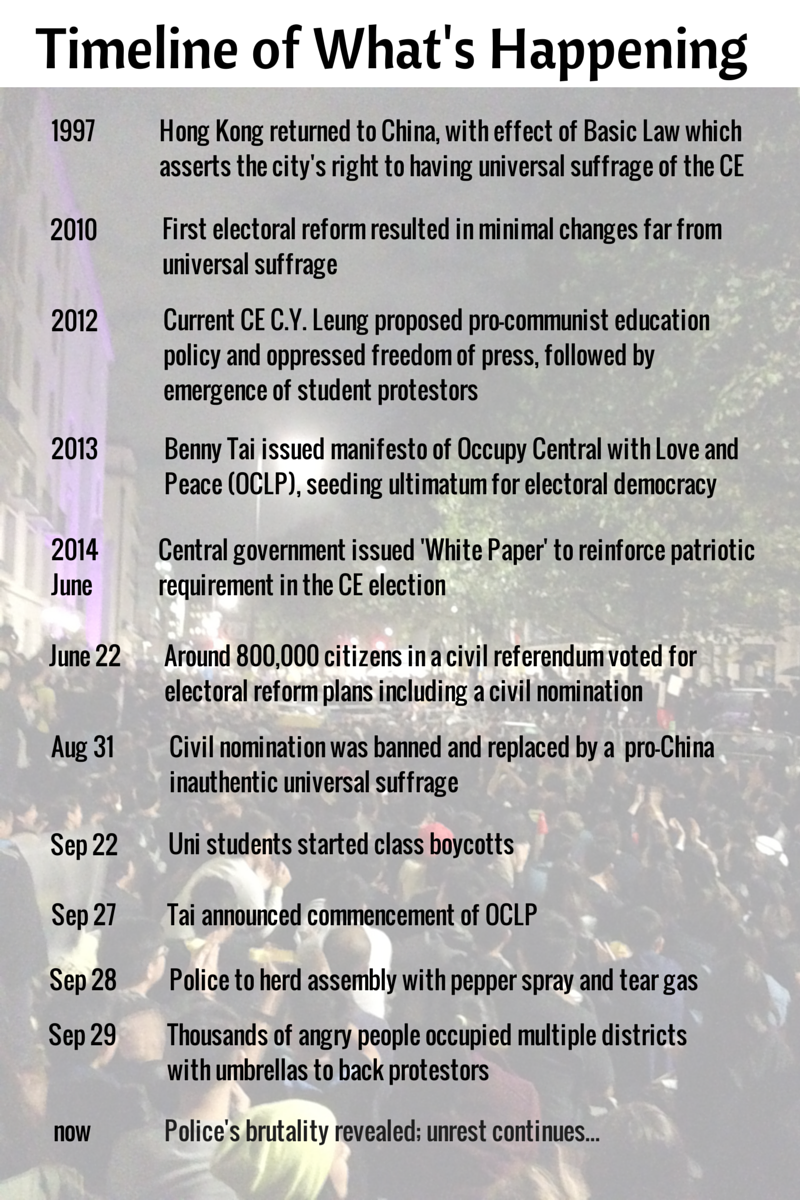