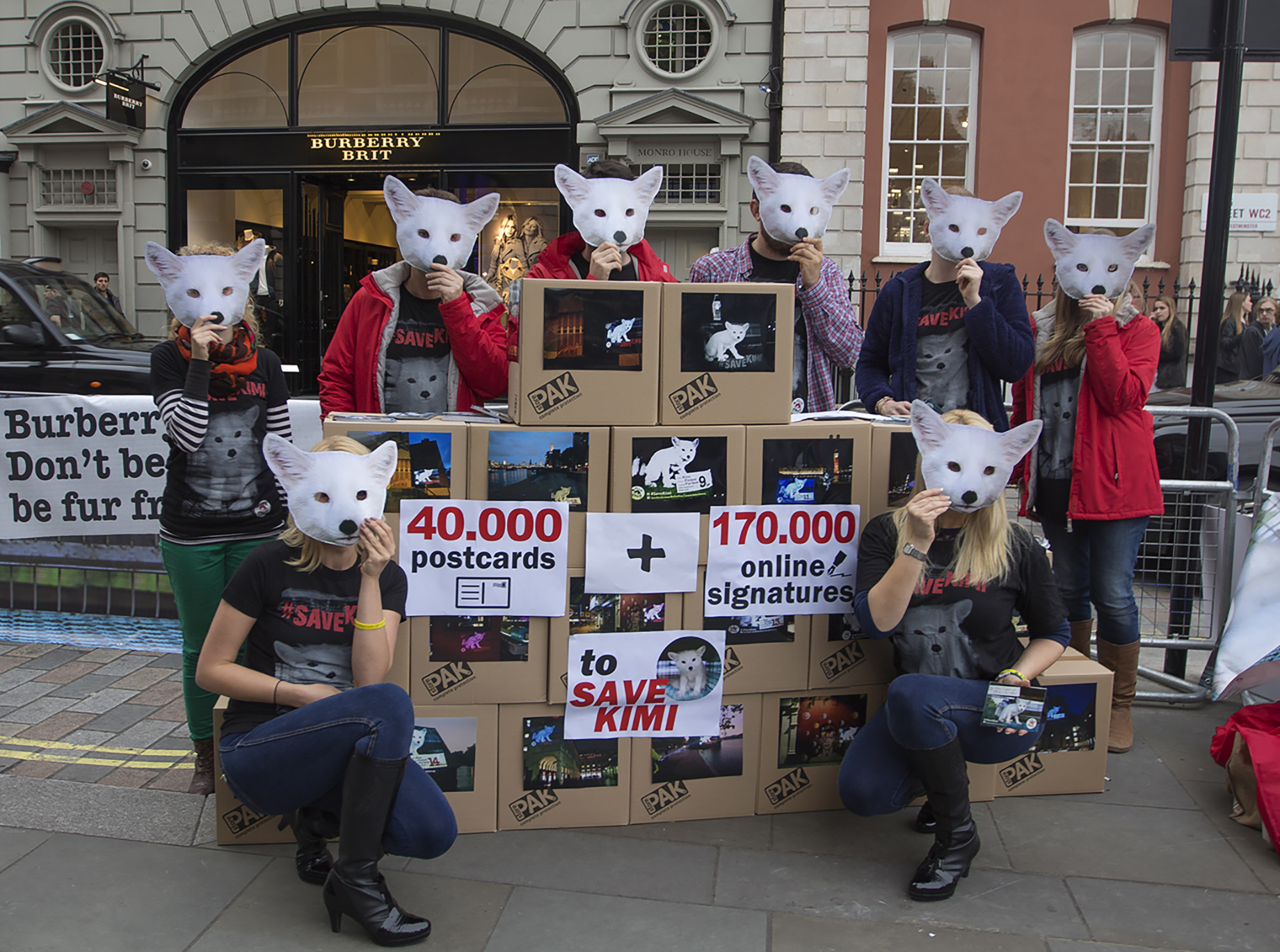 International animal rights group, Four Paws, have been rallying outside Burberry in peaceful protest as part of their campaign to stop the luxury British fashion brand from using real fur.

Four Paws launched the ‘Save Kimi’ campaign to raise awareness of fur farms. These are where animals are killed to supply the fashion industry with fur.

The campaign centres around a white fox cub named Kimi, who is living on a fur farm in Finland. Kimi represents the 100 million animals killed every year to provide fur for the fashion industry. Kimi is likely to be slaughtered in November, a month which has been nicknamed the ‘fur-harvest’.

#SaveKimi: When I grow up I’m going to be a fur collar: Clever campaign targetting Burberry’s use of fur @FourPawsUK thttp://ind.pn/11R5xOB — Cool Blue (@coolbluepr) October 20, 2014

Kieran Harkin, head of programmes in the UK for Four Paws said: “We picked Burberry as they are a huge retailer in fashion, but approximately 1% of their revenue is in fur, so we’re not trying to destroy their business, we’re trying to get them to work with us.” 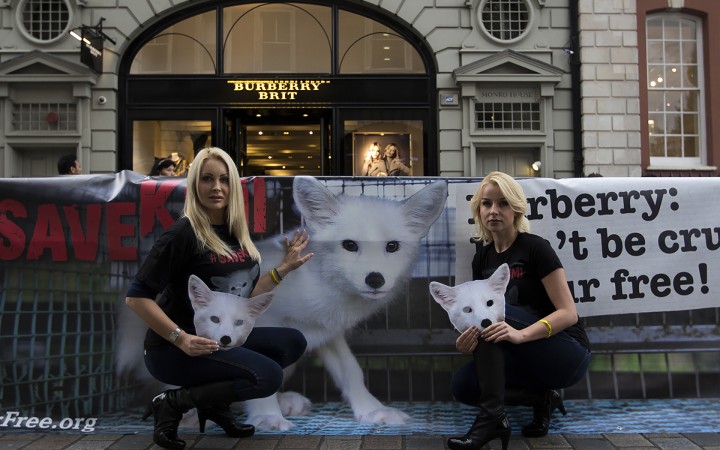 Four Paws is one of the original group of anti-fur campaigns which saw a peak in the 1990s.

Harkin said: “We’ve noticed that it is the new generation coming in that did not experience these peaks. Buying real fur has become publicly acceptable again and so it’s creeping back in the industry. That’s why we need to take a stance again and let those generations know.”

200,000 signatures have been collected from an online petition by the animal rights group. Harkin said: “We have offered Burberry two times already to enter into negotiations with us, they have refused to. We have been offered the opportunity to hand over the 200,000 signatures to them in person and that is why we are here today.”

Help us #savekimi and the hundreds of thousands animals being killed for fur! Call on Burberry to be fur free! https://t.co/EhNDWWB9qE — Ursula Gumlaw (@GumlawU) October 17, 2014

The peaceful protest, held on the 24th October saw protesters wearing Kimi masks and the team handing out flyers to the general public. Dan Shooter, one of the protesters gave his opinion on the use of real fur:

“You can forgive it in past times, decades ago when there wasn’t synthetic fur. Whereas now there’s absolutely no excuse for harming any being for the sake of fashion.”

Roberto Pless-Paratcha, also said that: “For fashion, in 2014 where we can produce something that looks like fur, smells like fur and looks like fur, it’s not really necessary to use real fur anymore.” The campaign to save Kimi is running across multiple social media platforms.

On Facebook, the campaign is written like a diary from Kimi and there is also an Instagram account for the white fox. Four Paws are encouraging backers of the campaign to promote it using #savekimi.

Burberry have refused to comment on the Save Kimi campaign.