The emerging British performance artist XXXora was born to Spanish parents in London. Raised as a boy, she describes how looking back at family videos of herself as a four year old, it was evident that she wasn’t fulfilling the stereotypical traits of an ordinary little male.

At 25, she broke away from the role she felt forced to play through adolescence – art being her catharsis. A unisex artist, XXXora is making waves in the art scene as well as in our perhaps surprisingly underdeveloped society.

“I wanted to find some kind of examples in history of unisex figures and I was finding it bloody difficult. Not until I looked at Greek mythology did I find a couple of Greek gods and goddesses who were androgynous and depicted in classical sculpture as unisexual figures,” she explained.

“Eros was often depicted as a feminized youth, Athena as a masculine female, and then I found Hermaphroditus. He’s really first mentioned by the revered Roman poet Ovid in his anthology of poems called Metamorphosis. Hermaphroditus is one of these stories – a tale of torture and of rape: Ovid leaves this character traumatised.”

Another Greek deity, Agdistis, was born with both male and female reproductive organs; ancient Greek author Hesiod tells us that she was forcibly castrated because the other gods feared her power. Hers was a narrative of insanity: whenever Agdistis went into a room, everyone around her would go deranged and chop off their own genitals. Agdistis was made a principle figure of castration and enslavement of lady boys.

There’s a line of ancient male authors who’ve shaped the Western perceptions with their poetry and prose: Homer, Hesiod, Plato, Ovid: important male figures who rewrote the stories of the gods and goddesses, shaming the once divine lady boy. Their legacy affects our society millenniums later.

XXXora’s ongoing exhibition The Silver Bo(X) focuses on the issues created by restricting human diversity into two black and white gender boxes. The Silver Bo(X) campaign proposes legislation to include a third box for individuals who don’t or aren’t legally able to identify themselves within the traditional gender binary. 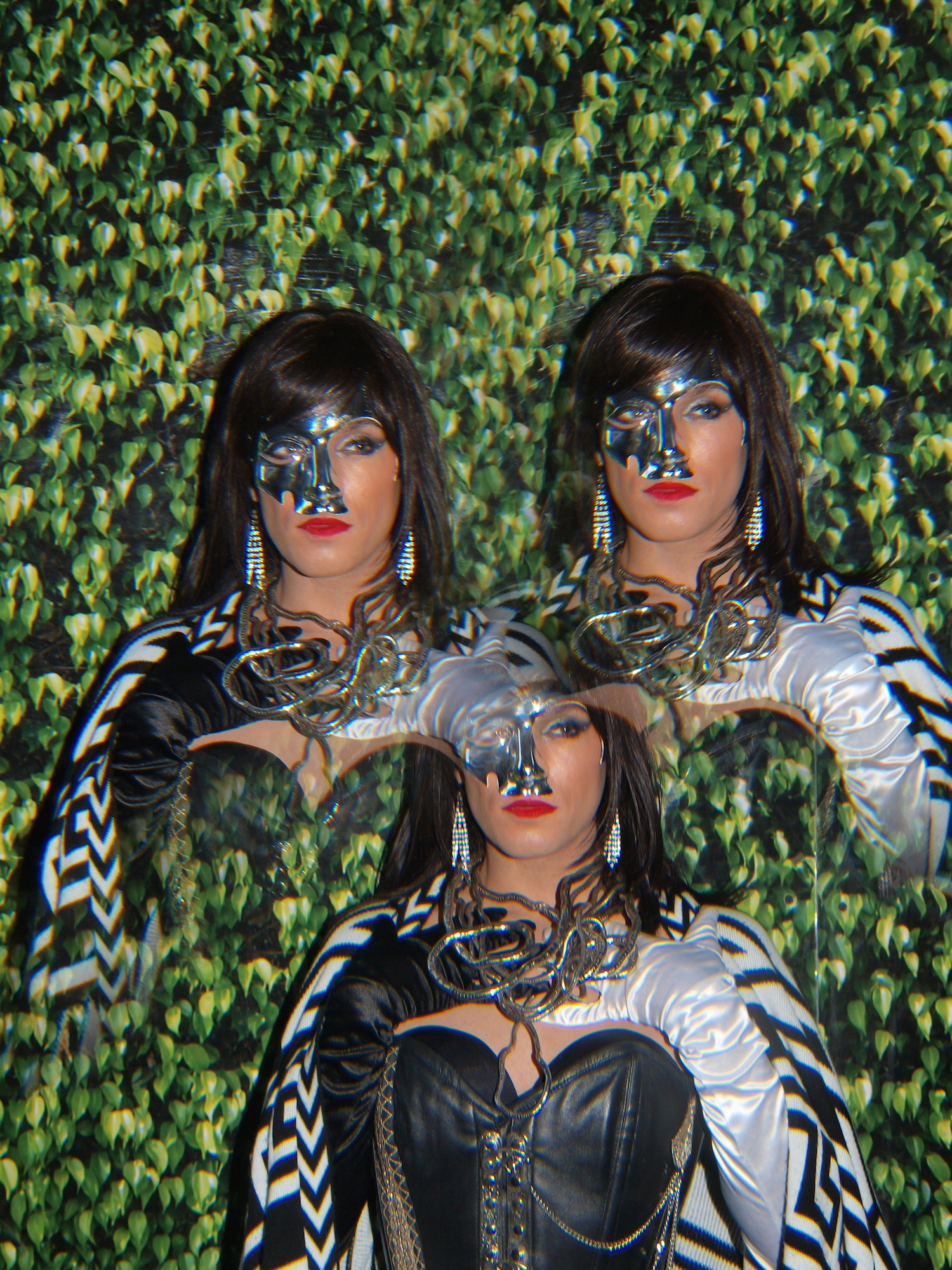 Launched at the Groucho Club in Soho, London, the exhibition was well received by the press, landing XXXora the front cover of the Independent On Sunday Magazine and garnering coverage in the Evening Standard, Mail on Sunday, BBC and more.

In the beginning of October 2014 The Groucho Club hosted a live sculpting event, where celebrity sculptress Frances Segelman live sculpted XXXora re-enacting the pose of famous sculpture The Sleeping Hermaphroditus (sculpted in Italy in 1620 and depicting the deity reclining, it currently resides at Le Louvre, Paris).

Part of the installation was also an audio piece narrated by Game of Thrones and film star Lena Headey called Swallowed Phanes, Castrated Agdistis, Captured Hermaphroditus – in which XXXora re-writes the true stories of these castrated and decimated Greek unisex deities.

Placed around the room were printed images of South African runner Caster Semenya, an ‘androgynous champion athletic deity’ to XXXora, and an individual recently forced to undergo intrusive gender tests to determine if she could continue to compete professionally. She was then disqualified and dehumanised publicly by the sporting gods because of her biological ambiguity.

Another case of inequality with inter-sex athletes is Indian runner Santhi Soundarajan. Gender tests resulted in Soundarajan being stripped of her silver medal won at the 2006 Doha Asian Games. After much turmoil, she’s now been accepted to start studies with the goal of becoming a coach.

Support group Accord Alliance states that one in every 1,500 children are born with an intersex condition or a ‘disorder of sex development’. The NHS estimate 0.1-2 per cent of the UK population are affected, with many more children being born with stereotypically male or female genitalia but still being biologically androgynous.

XXXora’s experience is that parents are encouraged by society to make a decision for their children with the intention of making life easier for them. However, they’re too young to consent to surgery – ultimately giving them a non-reversible gender.

“We’re stitching them up black or white for life. I believe that we have to start with changing the laws and then that’ll work outwards to change our perception of these individuals so that they don’t have to confine themselves to these gender boxes if this isn’t their nature. The focus here is consent, respect and equality in UK law, which isn’t the case at present.”

Sarah, the muse for the aural art piece Castrated Agdistis, is a good friend of XXXora’s and was born an XY woman with internal testes. At eight years old she was told her ovaries were cancerous and doctors removed them – but in fact they removed her testes without the consent of her or her family.

Sarah was left castrated and forced to take a lifelong course of artificial hormones to ‘cleanse’ her of her biological androgyny. This left Sarah with a confused sense of self, resulting in years of substance addiction and turmoil.

Fortunately Sarah found peace and is now a practicing therapist specialising in addiction. XXXora suggests that this type of story is more common than we think. There’s a direct link to the mythologies created by the handful of canonical male authors and the eradication of all androgynous genders over thousands of years. 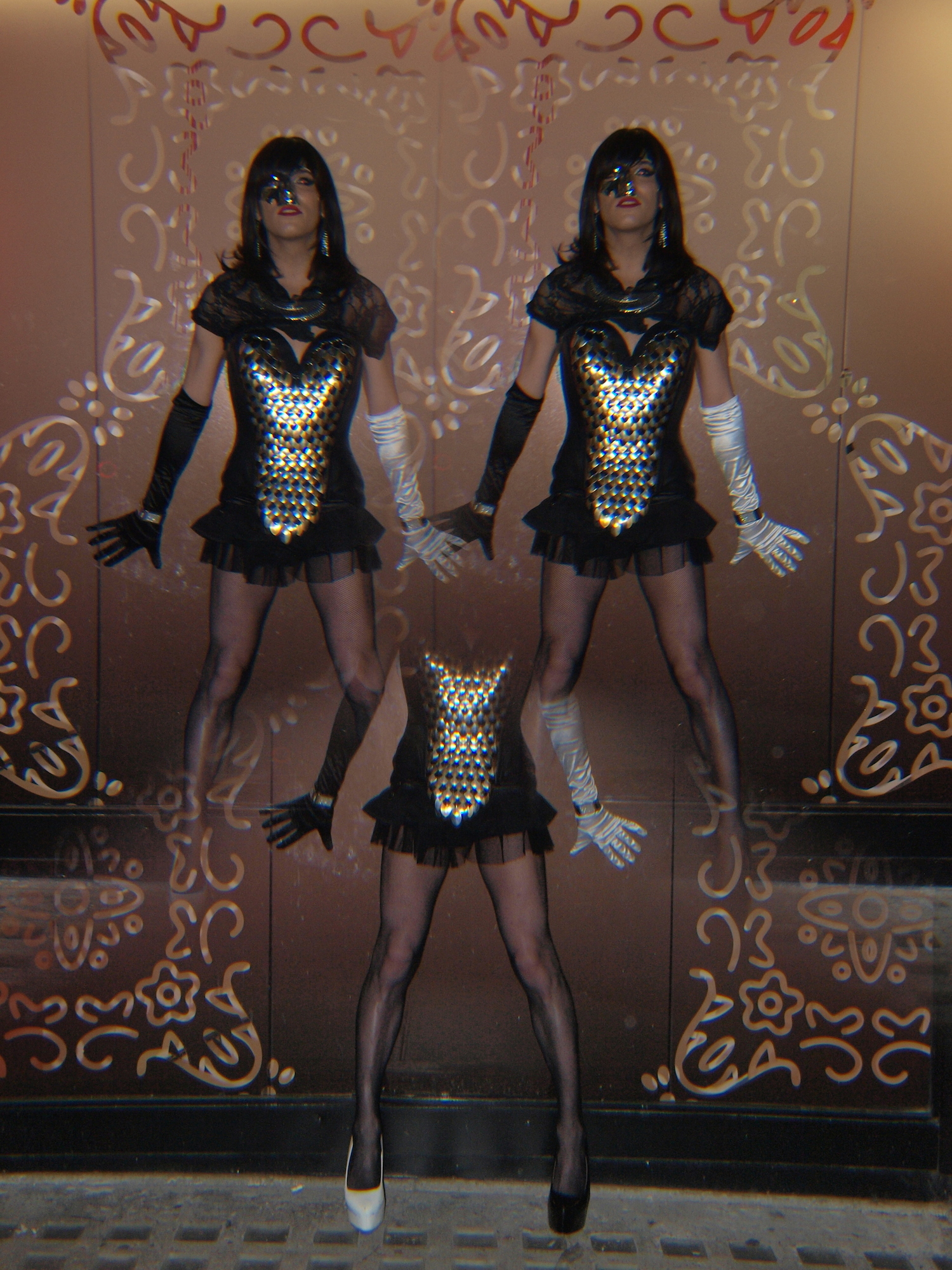 XXXora’s art centres around her core statement that androgyny is a middle ground that we all share. Our bodies contain an inherent level of both female and male sex hormones. We all have at least one X sex-determining chromosome, a symbol which she uses in her artist name, exhibition title and quest to establish a third ‘X’ box for gender.

Her art revolts against derogatory depictions of androgyny in the media; she cites the response to Boy George when he launched his first album Is it Mr. or Mrs. Weird? as an event that influenced the young XXXora’s choices to fight against her own nature.

“There are no established archetypes for people like me. Androgyny is considered fashion, but it’s not considered a genetic reality. It is, though; it’s all around us – in all aspects of nature. Us lady boys have a kind of inbuilt insecurity because our society sees us as not even second class citizens, but even third class. Invisible citizens. Lady boys are a little like unicorns or mermaids because we’re like a mythology that people don’t really know exists.”

“Lady boys are a little like unicorns or mermaids because we’re like a mythology that people don’t really know exists.”

XXXora’s previous work depicted the many hermaphrodites of nature, and she often works with optical illusions, saying that in many ways she’s an optical illusion herself. Identifying as unisex, XXXora dresses in stereotypically hyper feminine outfits, more often than not including corsets, stilettos, and elbow high gloves.

She believes that she’s drawn to extreme femininity because it was the part of her she had to suppress for the majority of her past. Black, white and silver are the only colours she’ll wear until The Silver Bo(X) campaign has reached its goal.

The most striking feature of XXXora’s public appearance are the silver masks she wears to cover half of her face. Years ago, surgery on her right eye went horrifically wrong, and at one point she thought she’d lose it.

After a series of operations, some that continued to go badly, she was forbidden from using make-up for two years. Not being biologically female, this caused XXXora to feel very vulnerable.

“I’ve started to make my own masks, they’re all sterling silver and completely different designs. I want to establish myself as a mask maker and silversmith. I’m exhibiting them at The Pan Amsterdam Art and Antiques Fair at the end of November with Galerie Lieve Hemel. I realise that the mask attracts attention, but I’ve turned the negative into a positive – like an alchemist I’ve been able to turn lead into gold, or a traumatic operation into silver.

“I would really like to explore this mask world – not just the physical masks that I want to make for myself and other people, but also the narrative of masks in my work. Masks have been used in religious and ceremonial contexts all through history. I also like the Oscar Wilde quote: ‘Give a man a mask and he will tell you the truth’.

“There’s a confidence building aspect of having a barrier between you and the spectator. We live in a society that’s obsessed by wearing masks. Sunglasses, huge fake eyelashes, fake tans, men injecting testosterone and going to the gym a lot to get a bigger body, or girls not eating anything – the body is a mask too. My silver mask makes me feel more protected. It’s my armour.”

At this point in the interview, Barry Lategan, legendary photographer and friend of XXXora’s, quotes from John Berger’s book Ways of Seeing: “You are the only person who can see yourself, except as an image.’’

Fitting, as this is the foundation of XXXora’s fight: legal recognition of a third unisex gender, the abolition of genital mutilation of non-consenting underage individuals and to encourage individuals born with ambiguous sexual organs to accept their difference and not feel the need to surgically modify their bodies or adhere to stereotypes.

“It all harks back to the beginnings of Western culture when we had the decimation of third gender deities like Agdistis, Phanes and Hermaphroditus. It’s a legacy that’s been passed on. But we’re at a stage now where we can see that this is changing. It’s one of the biggest civil rights movements now and it has a domino effect around the world.

“Countries around the world are changing laws, realising that gender and sex is spectral. Britain is lagging behind at the moment. Germany and Denmark are countries that’ve already changed their laws to facilitate the lives of transgendered individuals and people with ambiguous genitalia.”

XXXora’s aim for humankind is to embrace the diversity in nature and allow ourselves to determine who we are – and for this, The Silver Bo(X) is the first step.

XXXora has upcoming exhibitions in Madrid, Amsterdam, London and Barcelona.