The summer that left feminism in the spotlight 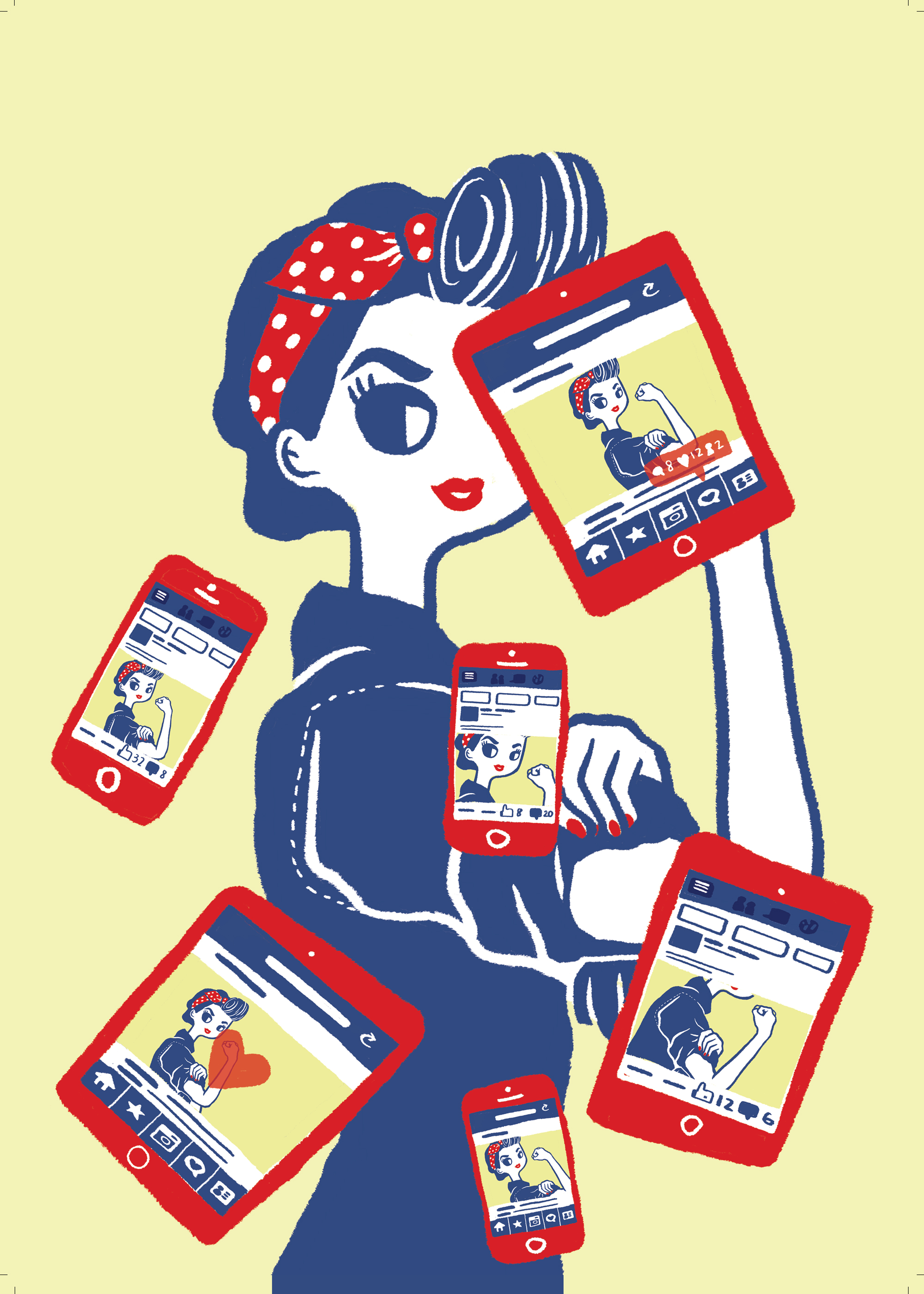 The summer of 2014 felt like a never ending Hollywood-produced commercial for A-listers endorsing the feminist movement. It seemed like after decades of ridicule in the media, it had finally become the ‘fashionable’ thing for the glitterati to affiliate themselves with.

For a long time, many refused to associate themselves with feminism because of its inherently sexist prefix, but in recent months there seems to have been a transformation in identity for the movement. Celebrities have been championing it, vocally and visibly proud. Taylor Swift and Jennifer Lawrence revealed their allegiance to the crusade.

Beyoncé displayed ‘FEMINIST’ in illuminated, double height letters behind her at the MTV VMAs. Emma Watson delivered a gender equality speech in front of the UN, while Sarah Silverman launched a campaign for the same cause.

The celebrity feminism movement seems to be changing the public perception of the word, almost rebranding it. These big names are causing a shift away from the tainted definition that for a long time looked unsalvageable.

The common perception of feminism is moving towards the idea of gender ‘equalism’, moving away from the extremist interpretation of Simone de Beauvoir: “Feminism without revolution is an absurd idea. Women will not be liberated until they take up revolutionary politics.”

Nigerian author Chimamanda Ngozi Adichie recently challenged the meaning of feminism in one of her TED talks. She believes being a feminist means “you believe in the social, political and economic equality of the sexes.”

She’s also the woman Beyoncé sampled in her song Flawless, using a quote from her TEDxEuston talk, “We should all be feminists.” In Flawless, Beyoncé says “we teach girls to shrink themselves, to make themselves smaller. We say to girls ‘You can have ambition, but not too much’.”

Wow, making a “shut up ladies” joke in response to a tweet about silencing women. Now THAT’s comedy, you should all go profesh.

Asha Dahya, L.A. based host and editor-in-chief of female empowerment news blog GirlTalkHQ.com, when asked why celebrities are now turning to feminism, and whether or not these figures personally want change or are just acting as poster girls for the phenomenon of the moment, said: “Beyoncé, being the huge superstar that she is, and Taylor Swift equally, I wouldn’t call them poster girls for feminism, nor would I dumb them down and call them ‘tokenistic’ like Annie Lennox did.

“Being a celebrity is one of the strongest forms of currency in our culture, so if they can at least mention the word and say they stand for it, in an ideal world it would lead fans, readers and audience members to want to delve more into the movement and figure out what it means for themselves.”

But what about celebrities like Sarah Silverman and Emma Watson?

“Sarah Silverman and Emma Watson are in a slightly different boat, being that they’re fronting organisations. What Sarah Silverman has done with her ‘vagina tax’ video has opened the eyes of a younger generation of women in America to what they’re up against as they grow older. 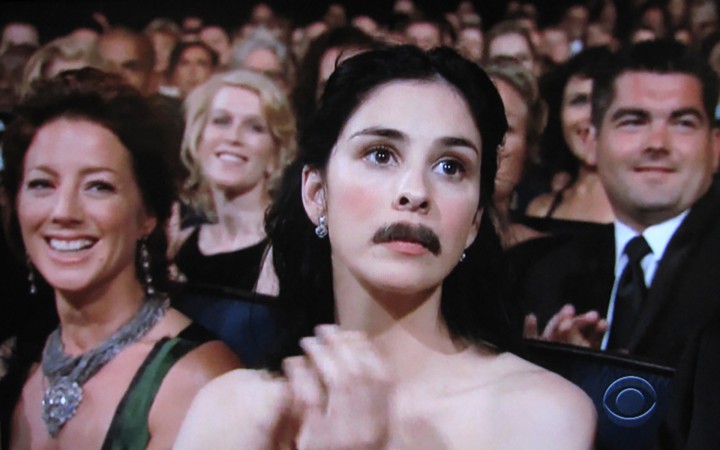 “She’s raising money for a non-profit and wants to put money and might behind legislation that will decrease the wage gap and other bills which seek to make society and the workforce an equal playing field for American women.

“Emma Watson speaking at the ‘He for She’ launch I thought sent a great message to young men and women. There’s too much stigma attached to the word ‘feminist’ so when she spoke about it in a very simple way, and showed why it’s a male issue also, I think it would be a very effective tool to have young men break away from the misogynistic mindsets that they may have grown up with from their dad, granddad etc.”

It seems 21st-century feminism never insinuates that women are above men, or that they should be. Watson only wishes to highlight the importance of raising children in a way that allows them to learn from the beginning to be themselves and not feel forced to play the arbitrary gender roles set out by society. 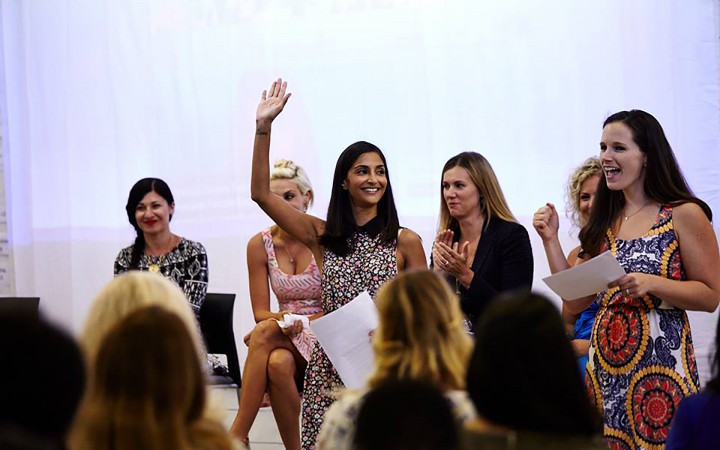 Asha Dahya in the middle of the photo during a discussion

When asked if over the summer it became ‘cool’ for celebrities to endorse feminism, Asha said: “I don’t know if I’d describe feminism as being ‘cool’ as there’s a lot of online discussion going against it.

“I think more than anything the fact that the younger generations are having that discussion and aren’t afraid to identify as a feminist, coupled with some major celebrities like Lena Dunham and Beyoncé standing in solidarity, can do a great deal for the movement. The more they urge sisterhood, equality and men’s voices in the conversation, we might start to see a shift in our culture.”

The fact that people with a global reach are now raising awareness, and urging for sisterhood and gender equality will only benefit the movement. Yet certain celebrities and pop stars are still undecided as to what being a feminist actually means.

Shailene Woodley and Katy Perry still make a conscious effort to disassociate themselves with the F-word because of all the negative connotations still associated with it. Presumably, they worry people will think they hate men and have hairy armpits, missing the point that being a feminist doesn’t mean you hate men and shun bras and razors.

Amanda Hess, co-founder of Tomorrow Magazine, contributor at Slate and former lifestyle editor at GOOD Magazine, explained whether or not she believes celebrities endorsing feminism is here to stay:

“I think these things come in cycles – there will be years where feminist messaging makes its way into popular music and film, and then years of backlash to feminism in popular culture, where celebrities don’t identify as feminists, and pop music becomes totally apolitical, and movies are all about how women need to find husbands or risk going crazy.

“We seem to be emerging from a backlash period right now – just a few years ago, Katy Perry, Lady Gaga, Beyoncé, and Taylor Swift all pushed off the feminist label, and they’ve all since reconsidered that stance.” 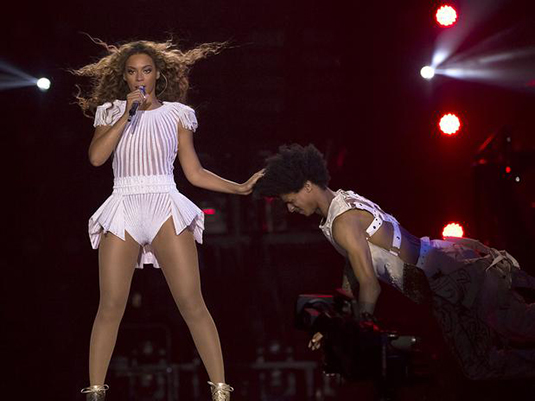 Why does she think there’s been a change?

“I think that’s partly because we’re in a period of time where media is slightly more democratised than it used to be, so someone like Lena Dunham can make an independent film and get an HBO show as an outspoken young woman, and fans of pop music are also getting access to political activism and feminism via Tumblr, and a lot of people writing headlines that end up reverberating around the world are feminist bloggers.

“Right now, female celebrities get more bad press for saying they’re NOT feminists than the other way around, and I think a lot of that has to do with how the internet has lowered the gates to speaking out, and allowed young women to have a voice in the popular conversation.”

[pullquote]”…they’re taking on feminist as a label, but not necessarily talking much about access to abortion rights or sexism in the entertainment industry or how identifying as a feminist has changed their thinking or their behaviour at all.” Amanda Hess[/pullquote]Are these celebrities responsible for starting a trend, or is this different to anything we’ve seen before?

“Whether this trend will stick or not remains to be seen. I do think we’re in a cultural moment right now where it’s bad PR for a famous young woman to say she’s not a feminist, and owning the label can bring a lot of warm press. That means that some women have been freed to make political statements (Lena Dunham bringing Planned Parenthood along on her book tour, or Emma Watson speaking about solidarity between men and women in the feminist movement in front of the UN), but a lot of female celebrities don’t have a very political messaging attached to their feminist identification – they’re taking on feminist as a label, but not necessarily talking much about access to abortion rights or sexism in the entertainment industry or how identifying as a feminist has changed their thinking or their behaviour at all.”

Is this bad for feminism?

“That doesn’t mean that it’s bad for them to identify themselves as feminists – I think a lot of young women will see that feminism is cool and start their own journeys understanding exactly what that means. I think that just embracing the term ‘feminist’ is the first step toward actually empowering women around the world who aren’t rich and famous.”

We need to seriously address connections between violence, sexism and toxic ideas of manhood before boys and men commit more mass shootings.

Guardian journalist Roxane Gay says she has no problems with female or male celebrities claiming feminism and talking about the movement. She does however say that the movement runs into trouble when “we celebrate celebrity feminism while avoiding the actual work of feminism.

Gay is concerned that the public and the media will continue to stare at the glittery light of the latest celebrity feminist and avoid looking at the very real inequities that women throughout the world continue to face.

In a written debate with Rebecca Traister, writer Judith Shulevitz declared she was “sick of editorialising. What I’m looking for is pamphleteering. I want women to be writing manifestos.” Celebrities claiming feminism is one thing, but she doesn’t want people to get carried away if the real issues aren’t addressed. It seems that certain feminists disregard celebrities in the movement as their status and line of work may lead to distorted goals and achievements. 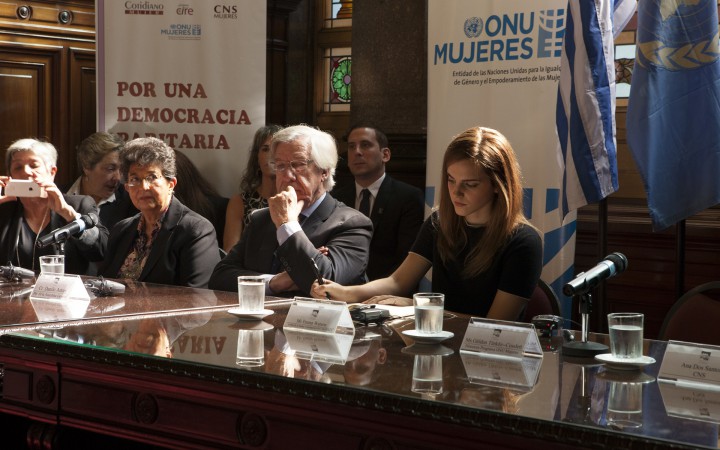 Former Conservative Member of Parliament for Corby, Louise Mensch, echoed her views on feminism last month, saying, “Here’s the truth: if all a woman talks about is feminism, she’s no feminist, she’s a narcissist. Real feminists have wide interests and careers.”

A feminist is someone who has a choice, someone who supports rather than tears down other women.

Although many ‘true’ feminists rule out the possibility that the girl-power-promoting celebrities of the summer could be ‘real’ feminists, the recent change in mood and connotations has created a global movement of feminism approval making it ‘fashionable’ and totally acceptable to want gender equality. Whether this is just a trend in a cycle like Hess mentioned remains to be seen.

But the fact that women such as Chimamanda Ngozi Adichie no longer have to feel like they are being labelled as a terrorist for identifying as feminist is a great thing for equality.

The world still has a long way to go to create equality globally with the Middle East and certain Asian countries trailing Western standards, but for the moment it seems that feminism isn’t dead. Instead, it’s going viral!

By Shannon Casey
4 Mins read
Viewers of the new Blonde film on Netflix have major concerns about the way that women like Marilyn Monroe are portrayed.
MusicVideo

By Artefact Magazine
1 Mins read
In this documentary, we analyse the male-dominated DJ industry. Female DJs from the UK and Germany share their experiences and the reality of being a woman in the music industry.