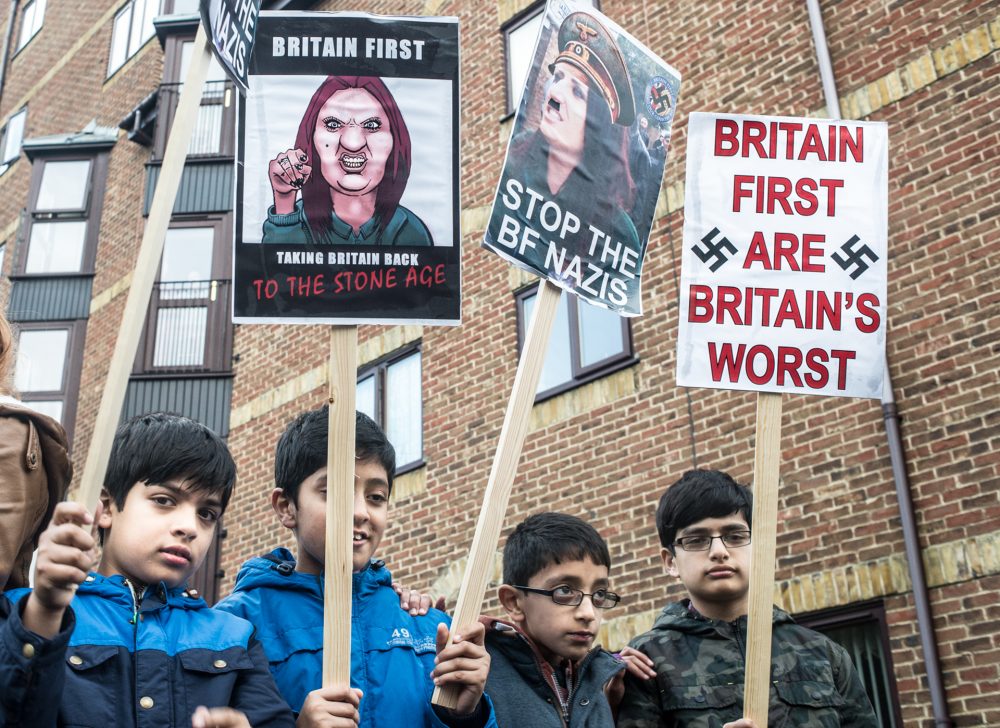 Britain First members were outnumbered by around five-to-one, only gathering around forty members for their campaign. The group were unable to give out any leaflets or march the length of the High Street.

Jayda Fransen, the Britain First candidate for Rochester and Strood – wearing black leggings and the Britain First staple green hoodie featuring a logo resembling a regimental badge – conveyed her support for UKIP by admitting that her party mirrored UKIP on a number of policies, including an escape route from the EU and restrictions on immigration.

Gathered outside Rochester train station, with stirring music playing and Union flags flying, Britain First were booed and hissed at by passers-by who firmly opposed the movement’s extreme ideology.

Billie Lewis, a writer and poet who had come with hundreds of others to oppose the march, expressed his disgust at Britain First: “They’re neo-nazists. They hijack the British flag because they know the Swastika is not going to work. Most of the marches of Britain First people are not actually from round here, only one of their leaders Paul Golding is. All of the anti-fascist people are local and we strongly don’t want them [Britain First] here (sic).”

Sarah Wilmot Davis, another activist who is also a nurse, could not believe her eyes: “As a local living in Rochester, we have no problems with immigration in the town at all.”

She added: “If you look at statistics, we have an above average amount of indigenous British population in this part of the UK. Immigration might be a problem to those who aren’t educated.”

Britain First was formed in 2011 by former members of the British National Party (BNP). They’re opposed to plans for a new mosque and community centre in nearby Gillingham.

There were no more than 40 Britain First members present at the rally. They waited in the rain to start their march, aware that they were outnumbered by the opposing activists, trade unionists, students and locals.

Elizabeth Odie, a local activist who had come to stand up to the fascists said: “I don’t think Britain First understands the difference between militant Islam and Islam as a whole. They don’t represent the voice of whole Rochester as they ship most of their followers from outside of Rochester.”

Tension quickly erupted when the BNP-linked group battled against a larger group of anti-fascist campaigners. “Britain First are Britain’s worst” said one placard, while another showed the Britain First deputy leader Jayda Fransen with a Hitler moustache reading “Stop the BF Nazis”.

The full list of candidates for the Rochester and Strood by-election is: