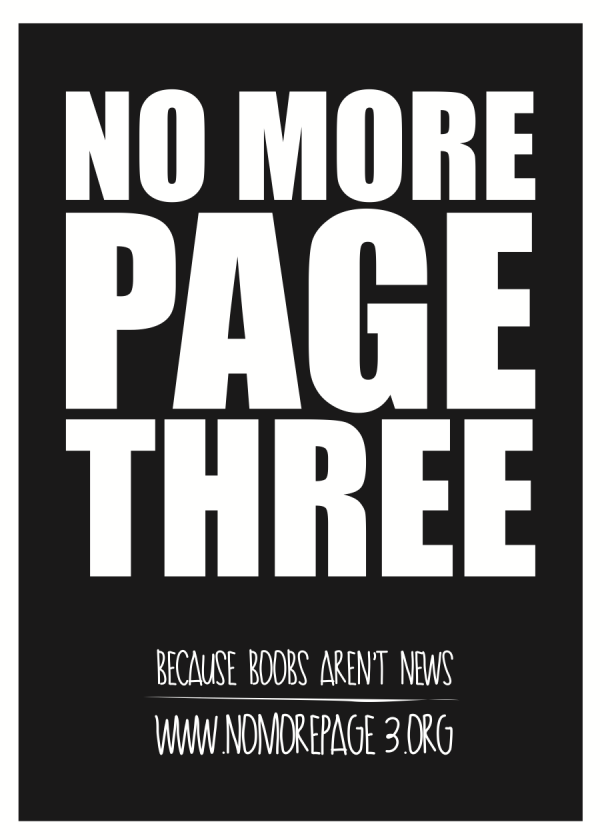 “If the biggest selling newspaper is saying ‘shut up girls and get your tits out’, it’s going to have an effect!” says campaigner Lucy Holmes.

For 44 years now, The Sun has flaunted women on Page 3 with massive breasts and little biography – Holmes and her campaign ‘No More Page 3’ want the feature and its sexism dropped for good.

She’s been dedicated to the cause since its conception in 2012, now Holmes has made her boldest move yet by organising the production of a Christmas single.

Now’s the Time by singer/songwriter Miss Baby Sol is going to help build support nationwide and beat The X Factor to number one.

Holmes said: “We had to think about how we could reach as many people as The Sun. We thought – what about getting a song in the charts?” ‘Go big or go home’ is the headquarters’ slogan.

“We aren’t saying we hate boobs, nudity or sex. We love boobs! But Page 3 is saying all that’s important about women is that they are desirable. It’s disempowering,” says Holmes.

She found inspiration for the campaign when she realised the biggest image in The Sun was always a woman posing in her knickers. “As a woman, it kind of felt like a slap in the face,” she said.

“We have this in a family paper, what’s this saying about how we value women?” asks Holmes.

Page 3 has been a hot topic for debate since it’s arrival in 1970, a time when sexism was rife. Holmes continued to say, “Society is still journeying towards equality. We need to keep creating a world for both men and women. Page 3 says it’s a man’s world. It really has to go!”

Now’s the Time will be officially released on December 15.