Creating a world of pure imagination

A great wizard named Albus Dumbledore once said: “In dreams, we enter a world that’s entirely our own.” However, JK Rowling managed to make that little world she dreamt of a reality and it unfolded in front of us as a series of books, then films, video games and real-life worlds you can visit.

For those strange folk out there who are unsure who JK Rowling is, she is the creator of the magical and fantastic world of Harry Potter. Her seven books in the series were transformed into films which challenged and revolutionised the world of graphics, film-making and set design.

Miraphora Mina and Eduardo Lima make up the design team ‘MinaLima’, the graphic designers behind the magical world of Harry Potter. MinaLima created iconic items such asThe Daily Prophet newspaper and Marauder’s Map for the films, as well as the thousands of other props such as spell books, skiving snack boxes and posters that were used in the Harry Potter films.

Artefact caught up with them recently to discuss their work and creativity.

How did your graphic design careers begin? 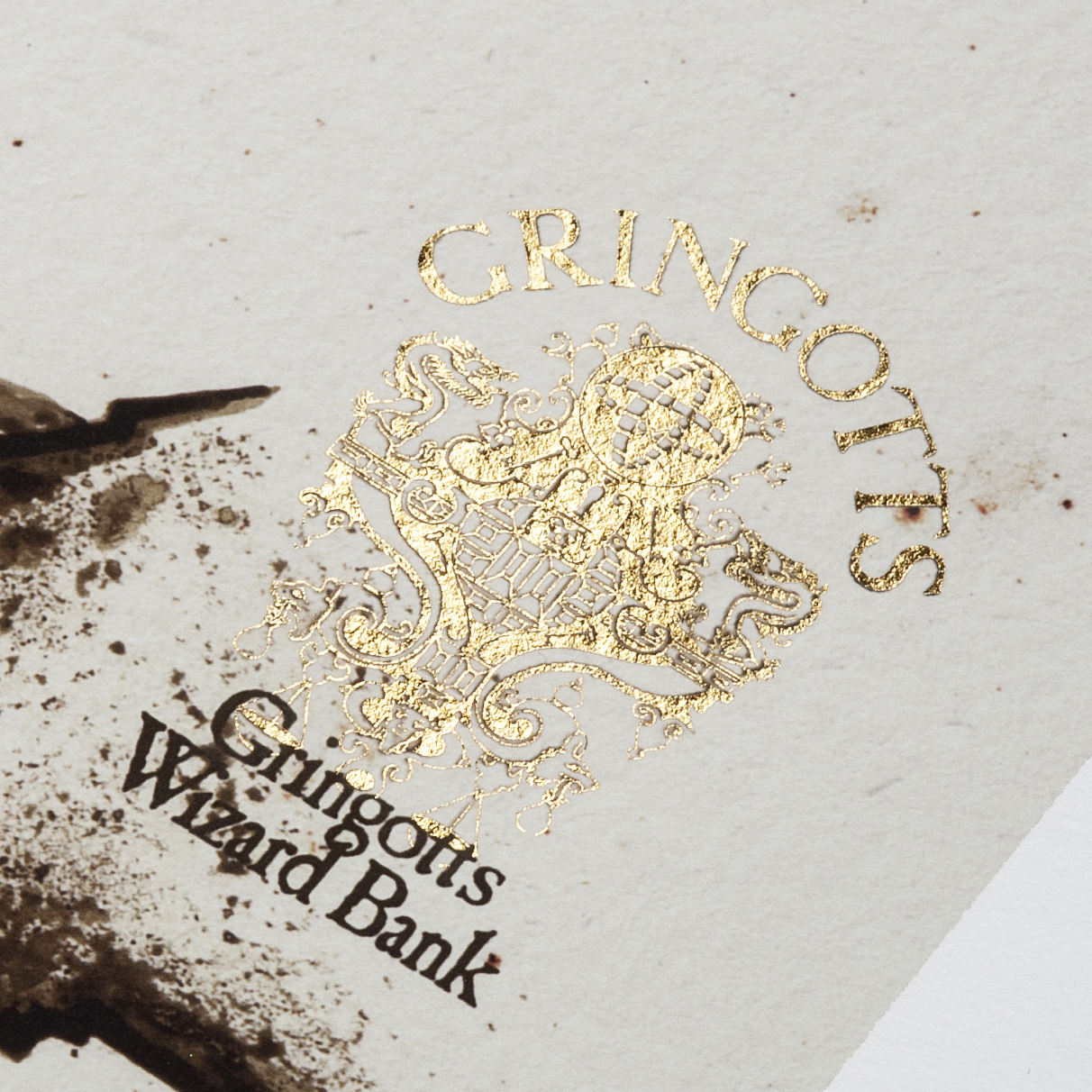 Miraphora: I went to Central Saint Martins before it was a part of UAL. I studied theatre design and went on to do a post graduate in film design so both of those courses were heading towards set design more than specifically graphics. I was always leaning towards ‘making’ and the sort of smaller scale details of set design though. When I left school, one of the people I was working for was Stuart Craig. He was the production designer on Harry Potter so he would pull the same crew together from the previous film he worked on and use them on the next film which happened to be Harry Potter.

Eduardo: I am originally from Brazil and did visual communications in graphic design in Rio. The graphic designer’s role in film was quite new when I came to the UK. Before, all graphic design work was sent out and wasn’t really a job or part of the film crew. It has been in the last 20 years that it’s changed. I joined Mira on the second film and since then we haven’t stopped working together.

Were you both fans of the Harry Potter books to begin with?

Miraphora: It wasn’t well known in the year 2000 amongst my generation, it was still quite niche among the younger readers.

Eduardo: In Brazil the books had not yet been translated so I hadn’t read them. We knew there was something happening about this wizard boy thing at the time. Once I got there and started creating this wizarding world, we had to read the books and I found it fascinating.

When it came to the design of the props, did you have creative freedom?

Miraphora: We’re pretty much given free reign on everything but that isn’t to say that approval wasn’t required when you suggested something. The typical process would have been to read in the script what was required and interpret that in your own way, come up with a concept and then share that with the production designer. If they approved that, you would take it to the producers and the directors. So there were quite a few people involved in the actual agreement of your concept but on the whole that was a fairly smooth process.

Eduardo: There’s a team of designers who work on the first film and stay until the end. They established the graphics of the films and everyone who joined later, including myself, was on board about the look.

How long did it take to create each prop for the films?

Eduardo: It depends, with any film or with any piece of design, you start with the research. Sometimes that can be quick or be more complex. For example, with a book that you need to think about the pages inside, the scene and how it is going to be seen by the viewers, that can take months.

Miraphora: But just to reinforce what Eduardo said about research, that’s a really key part of our design process. Usually because we’re doing historical films and trying to get the research right for the period, the materials used, how it aged and how it would look. So research and visual research to inspire something or to inform an authentic document, a book or a newspaper if very important.

Type and typography is something we spend a long time on too. Sometimes you’ll spend all day working out a type and you feel bad for spending so much time on that but that can make or break the personality of the design.

Eduardo: You’ve got to think of the storytelling, you need to tell that story with the prop.

Miraphor: Sometimes there’s only two seconds on screen to do that so you have to think about how quickly you are going to impart that information to the viewer. For example, there’s a scene in Harry Potter when Harry and Ron are fighting over a text book and they both want to get the new copy, they don’t want the crappy old one. We had to design a new version and old version that had to be quickly identifiable as the same book, but different editions. The old one had all the secrets and knowledge that Harry Potter needed for the story to evolve.

What was your favourite prop to work on in the Harry Potter films? 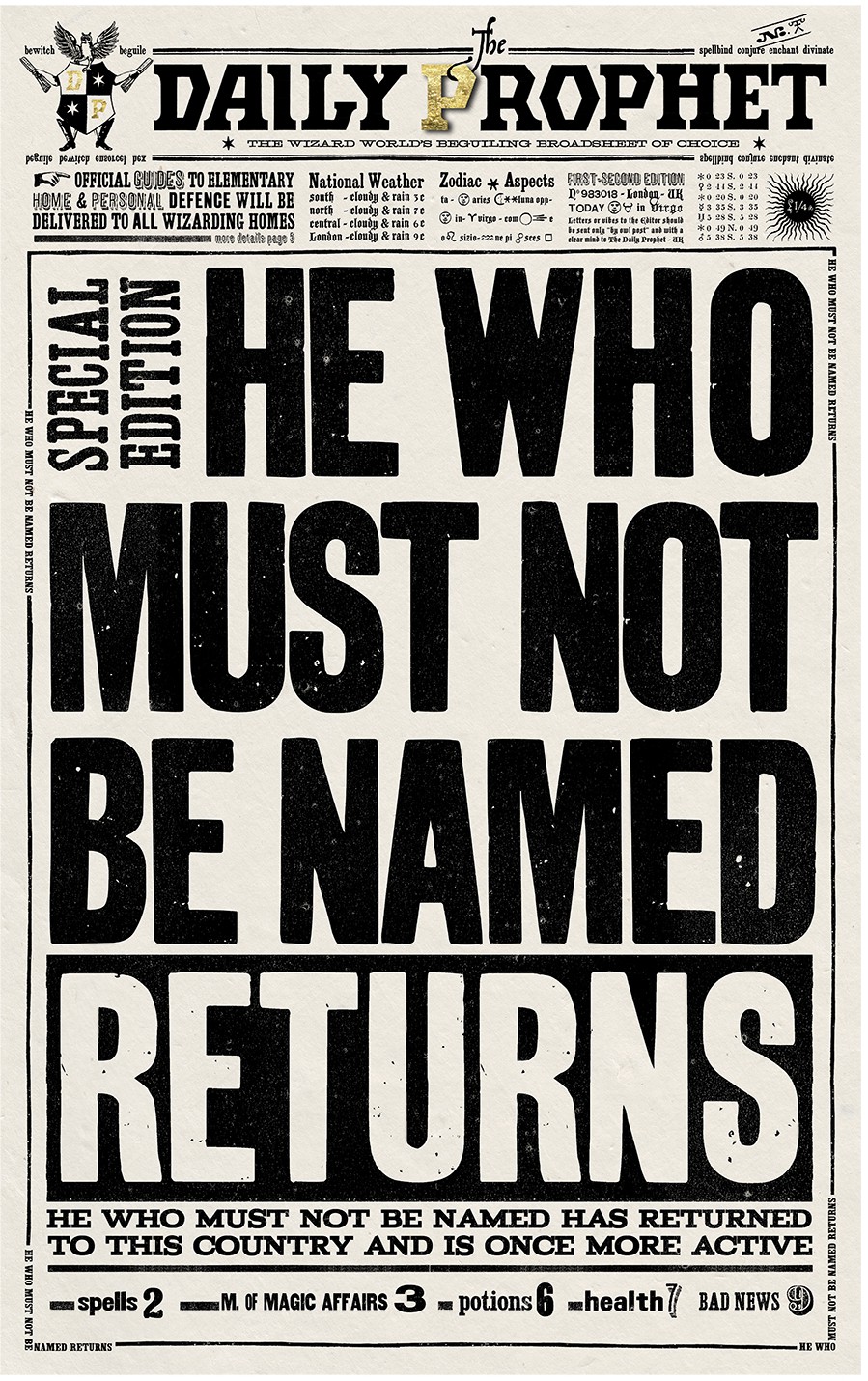 Miraphora: Eduardo was essentially the editor of The Daily Prophet, he did most of the laying out and the putting together of those papers. I did the same with the Marauder’s Map. Both of those props feature across most of the films heavily. Each prop went through different changes though. According to the story, certain sections of the map had to appear. It wasn’t a finished map on the first film, it was revised and added to according to the needs of the script. To design the map, I took the architectural drawings from the set and traced over them in lettering, so the map has some credibility and logic to it, despite the idiosyncrasy of it all being drawn by words and not lines. So the Marauder’s Map is architecturally correct. We also had to think about those who created the map in the story. It was designed by four cunning students who were smart and knew what they were doing, so I definitely didn’t want it to be a treasure island map.

As for The Daily Prophet newspaper, it went through a visual change and transformation when, in the story, the Ministry of Magic took over the running of the newspaper. It became a very totalitarian organisation so we looked at constructivist designs for propaganda posters for example, to inspire the aesthetic. So the design is always underpinned by the story.

Eduardo: Another thing is we did lots of branding, there were lots of props for the shops in Diagon Alley for example. So we designed the props for Gringotts bank and the Ministry of Magic which needed to have lots of identity. That was really cool to be a part of.

What have you guys been up to since the Harry Potter films ended and how have your careers evolved?

Eduardo: In a way we haven’t really left the Harry Potter world. From 2011-2013 we were working on the theme park in Orlando. We worked on creating Diagon Alley there, so for two years we did all of the graphics for that, we hadn’t done anything like that before so it was interesting.

Miraphora: We have also done two films. We worked on The Imitation Game. It was set in the Second World War so it was a case of getting an exact understanding of the period material we had to reproduce to help tell the story. As it was a film about code-breaking, we have to create a lot of paperwork, documents, maps and newspapers which were essential to the story.

Back in the studio we’re still working on a couple of books and we finished a couple of books as well. They are all heavily illustrated or with pieces that are removable within the book. We’ve been trying to bring our film background to publishing.

And, what’s coming up is work on the next J.K Rowling extravaganza which should start early next year. It’s the film adaptation of Fantastic Beasts and Where to Find Them.  We will be having the same role in that as we did with the Harry Potter films. 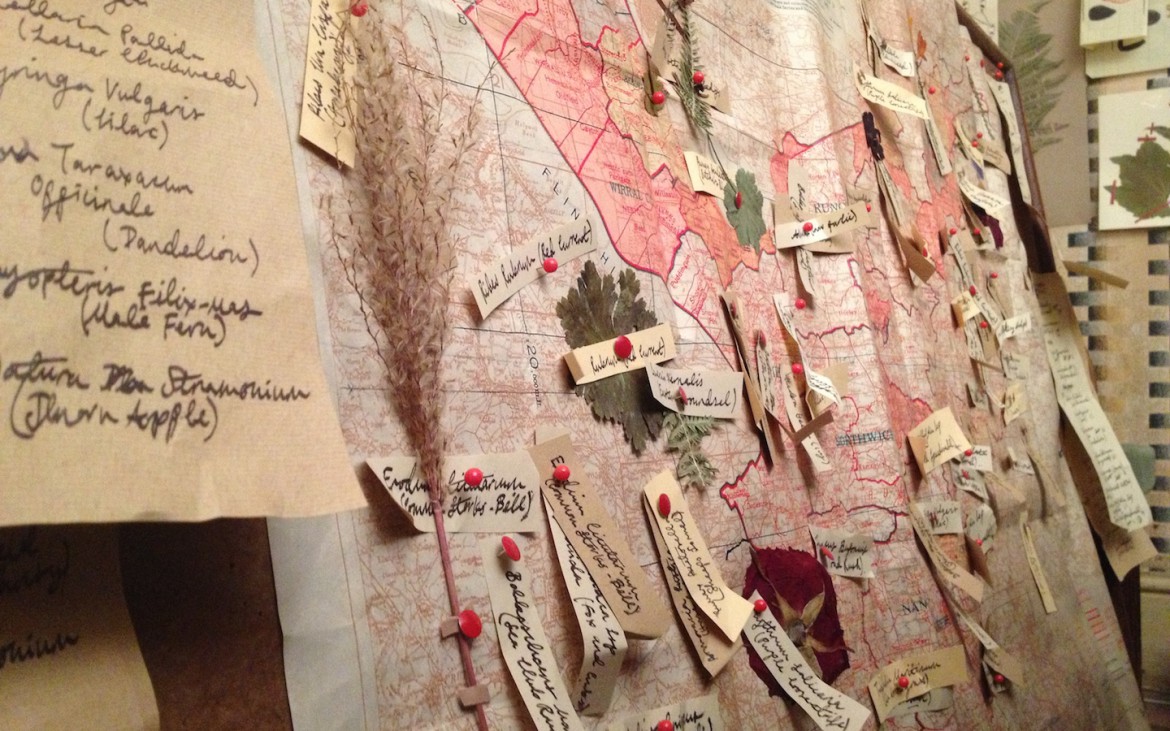 Notes appearing in The Imitation Game

Do you have any advice for students or people who want to go into graphic design?

Miraphora: Nowadays it is expected and helpful to do work experience. I think it provides good insight into the various practices of graphic design. Film is completely different from publishing for example. I would say that the absolute number one rule would be to keep your eyes open. In terms of when you’re walking around and looking at signage, the way things are put together, work out what makes you tick and what you don’t like the looks of.

“Maybe 1% of the population really look…But for students who are in design anyway, they tend to be in that 1%.”

Eduardo: Just yesterday we were talking about that and we arrived at the conclusion that maybe 1% of the population really look. Most people nowadays don’t pay attention to things. But for students who are in design anyway, they tend to be in that 1%.

Miraphora: The reason we’re saying that is because people can get lazy, especially when you have computers. You have to be really discerning about what you take from the internet in the case of research and reference. We just buy lots of books, we keep our library full and keep it going even though there is no space!

Miraphora: Oh God, spelling, yes! We’re quite often sent CVs, letters, portfolios, full of grammatical errors and there is no room for that in graphics as you’re communicating. Any of those students who still work with their hands or drawing, you should use that and mix it with work on a computer for visual answers and to give computer graphics your own personal touch. We do that a lot. In terms of film, just find out what films are happening, find out who is in the art department and offer your services as a trainee or work experience or as an assistant if you’ve graduated.