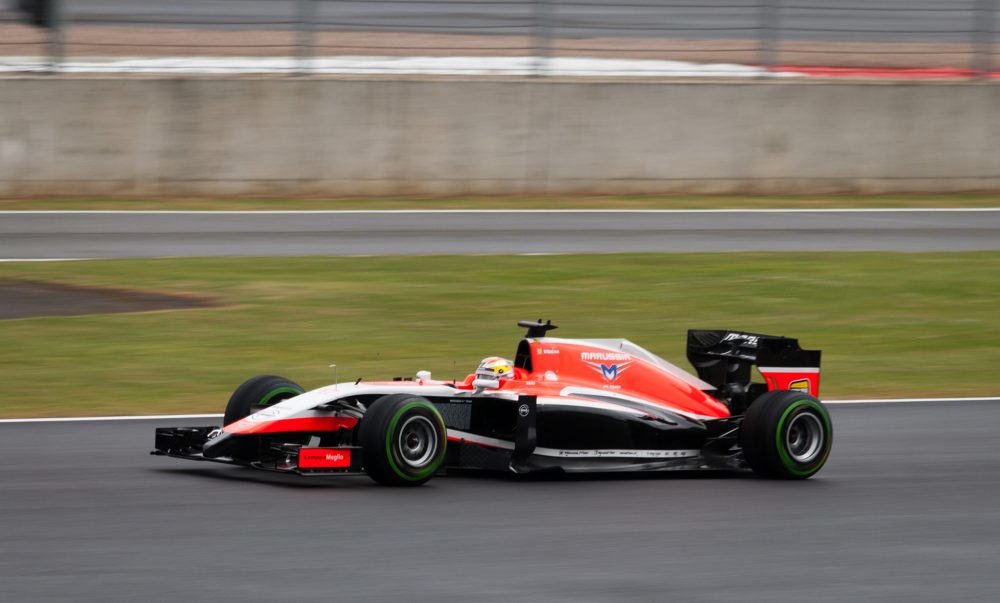 Following Jules Bianchi’s horrific crash in the Japanese Grand Prix in October, Max Petch looks at the evolution of Formula One in response to accidents over the years, and wonders whether more changes may come.

Bianchi is in hospital in Nice recovering from his injuries, which were very similar to those suffered by seven-time World Champion Michael Schumacher last February in a skiing accident in the French Alps. These recent incidents have resulted in life-threatening injuries to the upcoming star and to the godfather of the sport, however, history has shown the sport’s fatal accidents have not always brought about fundamental safety changes.

In the 1960s and 1970s, Formula One saw the deaths of some of the sports greatest and upcoming drivers as a result of designers pushing the cars to the limit of what they could achieve on the track. Jim Clark was a real gentlemen’s driver whose smooth style was envied but adored across the grid with him being often tooted by fans who saw the Scotsman as the best driver Formula One had ever seen. Clark became the father figure of the paddock with him mentoring upcoming drivers such as Jackie Stewart and Jackie Ickx.

In 1968, the sport took the life of the first superstar at Hockenheim in Germany. Clark’s revolutionary Lotus smashed into the one of the telegraph poles lining the track and he was thrown from his car and died instantly from severe neck injuries when he hit a tree. The whole paddock went into complete disarray with the sports ‘father’ being sent to the pearly gates in the pursuit of speed. Clark’s death signalled the start of the pursuit to safety to stop great drivers dying in cars that were fast but alarmingly dangerous.

The majority of the cars didn’t have seat belts, and the drivers were ill–equipped with open face helmets made out of weak materials such as cotton that offered little protection to the driver. With the cars reaching speeds of up to 170mph, the drivers always believed that they were only one shunt away from death. The safety fundamentals had to change with drivers having to wear fire-resistant clothing and the cars being fitted with compatible fire extinguishers by the end of the 1960s. Along with a change in drivers’ requirements, the cars began to be designed with safety in mind and tracks began to adapt to the safety demands made by the drivers.

As Formula One looked to make a fresh start in the 1970s, the Grand Prix Drivers Association began to become more vocal in its pursuit of safety. Drivers such as Jackie Stewart, Jochen Rindt and Jo Bonnier began to demand more from tracks. Following the fatal crash of Piers Courage at Zandvoort in 1970, the GPDA declared the Nurburgring in Germany to be too dangerous. The German GP was switched to Hockenheim, marking the first real steps of the sport to learn from its mistakes and cut down the amount of deaths occurring.

However, as shown early in the sport’s history, it can quickly take the life of another superstar driver. Jochen Rindt was the man to beat in the 1970 season with his Lotus 72’s revolutionary design, propelling the popular Austrian to the top of the table. As the Formula One circus headed to the Royal Italian Park of Monza, Rindt was leading the championship from Jacky Ickx when tragedy again swept across the paddock. Rindt’s Lotus crashed out before the Parabolica corner and he was killed. After the wreckage was cleared, it was found that the Austrian had been killed by his seat belt cutting his throat as he slid down in the cockpit. Rindt went on to be declared World Champion for the season and is the only driver to have won the title posthumously.

With Rindt’s death bringing the death toll to 14 since 1960, the need for safety was essential if the sport wanted to remove the dark cloud that constantly hung over the championship. With the GPDA keeping up its relentless push for safety, the 1970s saw radical changes in the overall design and dimension of the cars, driver equipment and off-track necessities. Permanent medical centres began to be built at tracks, helmets had to be approved by the FIA and the cars began to be reinforced with stronger materials such as carbon fibre, Kevlar and aluminium.

Along with these changes, a wave of new young, fast and charismatic drivers began to dominate the championship. The 1976 season saw one of the sport’s greatest rivalries emerge between James Hunt and Niki Lauda, which had the world glued to TV and radio to see who would be crowned World Champion. Outspoken Brit Hunt took the crown at a rain-soaked Suzuka in Japan, with Lauda retiring early declaring the conditions as ‘un-driveable’. Whilst the sport began to improve in safety, cars kept on getting faster with designers improving cars’ aerodynamics. The death toll began to gradually decline during the 1970s but history would shortly repeat itself with another celebrated driver dying.

Gilles Villeneuve was a maverick considered by many to be the fastest racing driver the sport had ever seen, but was also thought madly irresponsible. He won six Grand Prix races in a little more than four years, and his speed and driving style brought admiration from across the paddock, much like Jim Clark in the 1960s. Eddie Jordan summed up the Canadian as a driver who, “could never win a world championship as he drove like an idiot”. However many saw him as the real great of the sport whilst others claimed the prestigious title instead of him. Often driving inferior cars to the rest of the field, Villeneuve pushed his cars to their limit, often with incredible effect. At the 1980 Monaco GP, Villeneuve was five seconds quicker than the rest of the field in a defective Ferrari on slick tyres in the torrential rain.

His talent was there to see but as the sport began a new turbocharged era, Villeneuve became yet another driver who would perish in the pursuit for glory. In 1982 at the Belgian GP at Zolder, Villeneuve came across a slow moving March car of Jochen Mass during qualifying. A piece of misjudgement hurled Villeneuve’s Ferrari into the back of the March and catapulted into the air. On landing, the Ferrari disintegrated and Villeneuve was hurled from his car’s cockpit and found still strapped in his seat without a helmet hung on the spectator catch fencing a few yards away from the crash. He was pronounced dead later that evening from severe neck injuries.

After Villeneuve’s death, Formula One went into a period of transition and change. The cars were potentially lethally quick with more than 1200bhp on hand for the drivers.

The 1980s saw the rise of perhaps the finest all–round driver the world has ever seen in the form of Brazilian Ayrton Senna. A devout Christian, Senna optimised the absolute essence of sheer speed and complete control behind the wheel and just like the 1976 season, the late 1980s saw the development of perhaps the sport’s most fierce rivalry between Senna and Alain Prost. Whilst drivers’ egos and talents dominated the headlines, the drive for safety in the sport started to reach its peak with the cars coming under more rigorous crash testing and safer seat belts being fitted.

In the 1994 season, the Formula One circus travelled to the Italian state of San Marino to take on the fearsome Imola circuit, renowned on the calendar as one of the fastest racetracks. The race promised to be a showdown between Senna’s Williams and the upcoming Michael Schumacher in his quicker Benetton. Whilst the cars disembarked onto the track for qualifying, the paddock was sent into a state of despair when news of huge crash came over the tannoy across the circuit in the first part of qualifying. Roland Ratzenberger, who was driving for the Simtek team had one of the worst crashes ever seen in the history of the sport where he suffered front wing damage with his car becoming uncontrollable and sped towards the barriers at 190mph. The impact of the crash killed the Austrian instantly.

However, the main race went ahead. Senna led from Schumacher during the opening laps but entering Tamburello corner at around 190mph, Senna’s car failed to navigate it and he was sent into the concrete wall at around 135mph. The Brazilian died from severe head injuries. As medics and officials raced to the scene of the accident, they found a furled Austrian flag in the cockpit as a mark of respect for Ratzenberger’s death 24 hours previously. Senna, just like Clark and Villeneuve, was considered one of those drivers who couldn’t be killed behind the wheel of a car due to his ability to keep the car in perfect balance. As Senna’s body was flown home to his native Brazil, the country went into three days of official mourning.

The deaths of Ratzenberger and Senna at Imola sparked a number of safety changes to make sure that the dark weekend in May 1994 would not be repeated. The cars became more rigorously tested for safety standards by the FIA and the drivers’ helmets and overalls became more advanced and safer to ensure that they would withstand impacts such as Senna’s and Ratzenberger’s with safety being the top priority issue for each of the teams and drivers.

So where does Bianchi’s crash land in the scale of Formula One’s dark and blood-stained history? Since the 1994 San Marino GP, there hasn’t been a death in the sport due to the revolutionary changes made to the cars after the deaths of Senna and Ratzenberger. Robert Kubica’s huge smash in the 2007 Canadian Grand Prix is perhaps the closest the sport has come to a death with his car being launched towards a concrete wall at around 150mph. However modern safety aids that the drivers have, such as HANS (Head and Neck Safety Device) helped save the life of Kubica in the crash. However, post-crash, one FIA Safety Engineer remarked chillingly that, “At some point, there will be a fatality again in Formula One.”

Since the accident at Suzuka in October,  the future of the sport and safety has again been thrown up for discussion, with many drivers wanting action to be taken. Talk of a virtual safety car has been mooted across the paddock, whilst the cars also perhaps to be fitted with a closed canopy.

The future will hold the answers regarding what changes are eventually made, and for the time being issue of safety in the sport will remain an open chapter.