L’Usine: Fight for your right to party

“Le Zoo got me off the streets. I had a friend who worked there so I started working there too,” explains a staff member working at L’Usine.

A small Swiss city with a quaint old town, centred around a lake, it’s nestled between the Jura Mountains and the Alps. It’s a picturesque hub for bankers and international business, a clean city that enjoys its peace and quiet. You can imagine the nightlife here is aimed towards this rich international clientele.

Here, women with designer handbags and clothes go to have drinks bought for them by rich suited men wearing too much cologne. Where people sit at tables and lounge in an air-conditioned, rainbow mood lighting environment and pretend they have a certain je ne sais quoi, while listening to remixes of Top 40 club bangers.

These rich commercial clubs are aimed at expats, diplomats, and bankers who have plenty of money to burn. They invite international superstar guest DJs like Flo Rida or Will-i-am, and encourage a high class consumerist drinking culture – and do nothing for the local community.

Most people who don’t identify with this extravagant lifestyle find themselves drawn to alternative venues – where dressing up in haute couture and big spending aren’t involved.

On the other side of the spectrum there is L’Usine – creating events for every sub-genre and fighting to keep an alternative music scene going in the city. It’s a cultural venue – for the people by the people – a building in the heart of the city which demands to be heard and is respected in a quiet, traditional atmosphere.

L’Usine is tucked well away from the main road, standing in a small square. When darkness falls the building bursts into life, accepting everyone no matter who they are or how much money they earn into its dark bass-filled abyss.

This is a place where punks, rastas, drug dealers, international kids, artists, and metal-heads of all shapes, sizes, beliefs and ages are welcome with open arms.

“I worked in the cloakroom, then the bar, then I was the head bartender so the punk bar [Moloko] got me to work there because I was a punk. It was a lot more fun – it’s very social work,” the staff member, who wished to remain anonymous, explains.

“They got me out of the shit I was in. This was ten years ago – L’Usine is all about solidarity.” 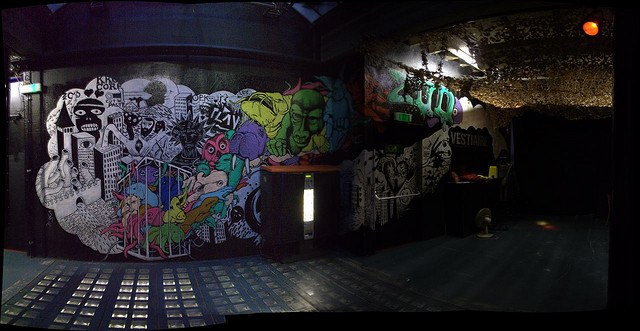 Inside Le Zoo, the main room on the top floor of L’Usine [Flickr:Samuel Huron]

L’Usine is one of the main alternative cultural venues in Geneva and has been going strong for over 25 years – despite numerous attempts to shut it down.

It’s one of Europe’s largest self-managed cultural spaces, which groups together 18 different collectives and associations, including a radio station, a graphic design studio and a bar.

This resurrected gold processing factory has been running alternative music nights in its main rooms Le Zoo and Le Rez since 1989, hosting films, performances, festivals and art events throughout the year.

For many, this is the place which invites them to explore the world of alternative music and reject the expensive commercial nightclubs elsewhere in the city.

“Le Zoo’s a funny place because it functions horizontally. The security, the bosses, everyone can say that it wasn’t a good night for example and everyone has the right to critique each other – everyone is equal. And that’s what’s really good, that’s why I’m so close to them because they function like punks, like human beings,” says the staff member.

Over the last few years the government started shutting down all the main squat areas around the city because of noise complaints and safety reasons. This has had a significant impact on Geneva’s underground nightlife.

The closure of much loved places like Artemis, K Bar and Le Piment Rouge meant that partygoers were running out of places to go. With the number of venues rapidly disappearing, L’Usine had no choice but to take in the flood of people searching for underground music, pushing its capacity to the limits.

There have been numerous attempts to shut it down over the years, complaints about it being too loud, unhealthy or for drug trafficking. None of these have stalled the establishment, but it’s still under a lot of pressure from the government. It’s considered a black sheep, an outlaw, and its cultural purpose seems to be ignored by officials.

A lot of residents talked about how much the city had changed. A Facebook page was launched by Mikael Schaub entitled ‘Genève, c’était mieux avant’ (Geneva was better before) which gained more than 2,000 likes in under four days.

People started wearing t-shirts with the same slogan written across the front, openly showing their discontent. Changes were happening to the city and people were dissatisfied that local government were trying to close these events that had such close ties with the local underground cultural scene.

In an article in the Tribune de Genève, Mikael Schaub says his Facebook page gained so many likes because of the sense of rising insecurity that people felt. In an official government poll in 2012, 62% of locals felt a growing sense of insecurity within their home town, compared to 37% in 2010; largely because the crime rate had risen, which for such a traditional, safe city made a huge difference to people’s mentality.

[pullquote align=”right”]“We’re living in the shadow – there’s no right balance.” – Mousa Ceesay[/pullquote]This sense of insecurity is also apparent when you go for nights out in the underground music venues in the city. Because Geneva has strict noise laws – banning excessive noise between 9pm and 7am – there have been many complaints trying to shut down music venues and bars in the centre of town. The younger generations feel their nightlife is being killed off, as their favourite haunts have to fight for their licenses.

Mousa Ceesay is a promoter for Secret Society, a Swiss record label showcasing local electronic music artists. He’s experienced the change since the squats closed and he explains why it’s taken so long for electronic music to emerge from the underground:

“I’ve got an idea about why this is. The problem with Geneva is basically the Calvinist spirit. It’s an eroding spirit. There are loads of people who I find are very talented in different electronic music styles here, and the only problem is that music has to be exported for it to be recognised here. That’s what I think is happening.”

Mousa tells me about the notable divide between the luxury clubbing scene and the alternative underground scene:

“There’s a problem with the choice of a night out between either L’Usine, maybe Weetamix or Silencio, and between the expatriate clubs like Java where people drink champagne and spend tons of money – which has nothing to do with us. We’re living in the shadow – there’s no right balance.”

So is it hard to be a talented local musician and get into the music scene here?

Speaking to Florence Halazy, the programmer for the line-up at Le Zoo, she explains how they’re trying to get artists to generate a buzz around the scene:

“It’s all about finding a balance. You have to alternate local guests and international guests to promote the local scene, at the same time as figuring out how to attract the most amount of people. That way you promote things people don’t know by attracting them with more well-known guests.Then people start getting interested and checking out who’s playing more often. They’re more likely to come to nights if the bookings are on point. In any case we’ve always got local DJs playing [at Le Zoo], we never do nights with just international guests.” 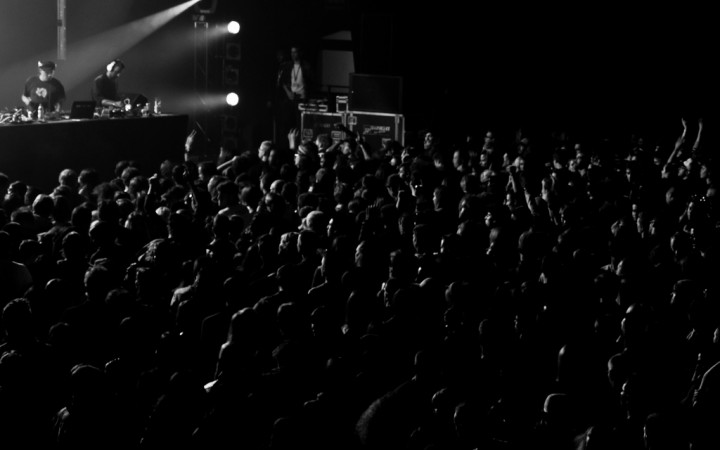 As one of the last big alternative cultural spaces in Geneva, L’Usine is fighting for its life.

This same struggle is not only being fought there, but everywhere around Europe. London has lost a significant number of its leading underground clubs since the 1990s due to gentrification. Berlin has experienced the same pressure on its nightlife; Knaak club was going for sixty years before closing down and Schokoladen is being threatened by continuous noise complaints.

Because it’s such a small city, the repercussions of L’Usine closing down would hit Geneva hard. However, it isn’t all bad news.

Despite the clampdown on these spaces, there’s been a notable increase in the number of electronic music festivals in the area over the last few years. HeadFun is the organisation behind Electron Festival and Présences Electroniques, which uses L’Usine as one of its main venues.

These initiatives are putting the Geneva electronic music back on the map and are trying to show how loved and appreciated these self-supported underdog clubs are.

They’re bringing together international as well as home-grown talents, and as past line-ups have shown, this has lead to an increase in attendance and popularity – not only for the festivals but also for the underground venues.

Newer venues like Motel Campo, Silencio, and La Gravière have appeared since the reduction in squats around the city, which gives young people some hope for their nightlife. More and more venues are opening in industrial areas instead of the city itself, which reduces the number of noise complaints.

Without L’Usine and the battle it’s fought, Geneva could have lost a priceless cultural gem – not to mention the faith that so many have in its political system.

Outside L’Ecurie, one of Geneva’s ex-squats which is now a bar and live music venue, people are milling around drinking beers and sorting the venue out for the live music event of the evening.

Stuck on the wall in the middle of a million other flyers and posters is a small sticker which reads: “Genève sera mieux demain” (“Geneva will be better tomorrow”).

A sticker to remind people that as long as you fight for what you believe in, there’s always a way out.