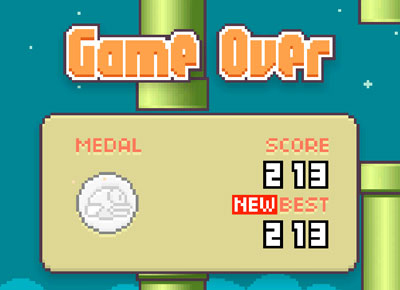 For those who don’t remember, Flappy Bird was an annoyingly simple yet addictive game for iOS released in 2013, that required the user to fly a bird through a series of differently sized pipes by tapping the screen (think the old helicopter style games with a re-skin).

The game was simple yet managed to gain a mass audience and attained popular culture status in virtually no time at all.

It recorded more than 50 million downloads worldwide, while making over $50,000 (approx. £30,000) a day in downloads and in-game advertising, meaning its move into a physical arcade is less of a mystery and will no doubt rake in the money.

The arcade machine itself is nothing to write home about. Rather than tapping the 42-inch living room sized screen, the player is presented with a giant red button to continually hammer, in a bid to earn tickets and guide the bird through what can now be imagined as the crawl space between the walls in your house.

Although Flappy Bird is still available to download for free, Flappy bird MMO is also highly recommended, which takes the original concept and throws a multiplayer mode into the mix. But for those with too much loose change, the Flappy Bird arcade machine may be what you’re looking for.