Beer bellies, bearded blokes, and bullseyes. Darts is stereotypically viewed as a game played in pubs across the country, by unathletic men whose choice of hydration is a pint of Fosters rather than a bottle of water.

But despite this perennial image problem, darts is one of the fastest growing forms of sports entertainment, and there is a dimension to it that is slowly coming to the fore.

In 2001, the British Darts Organisation (BDO) showcased the first-ever Women’s World Championship at the Lakeside Country Club in Surrey.

Since then, the tournament has become an ever-present on the darts calendar, that now includes various national and international Women’s events.

[pullquote align=”right”]’Compared to the men’s, the women’s prize money is dismal'[/pullquote]

Zoe Jones, is currently an apprentice decorator in the West Midlands. But she can now add being a World Championship quarter-finalist to her CV after an impressive debut showing at the Lakeside earlier this month.

The 22-year-old is one of many young up-and-coming players looking to take the female game to the next level.

“My journey began seven years ago in a pub called the Woodland Cottage in Redditch,” recalls Jones.

“My dad used to run a small weekly knock out tournament that I decided to enter one week to make the numbers up. From there, I got a real feel for the game, and week by week I noticed an improvement.

“I love pretty much everything about darts, the travel, the people. Most of all, the respect and support I’ve gained from achieving something is amazing.” 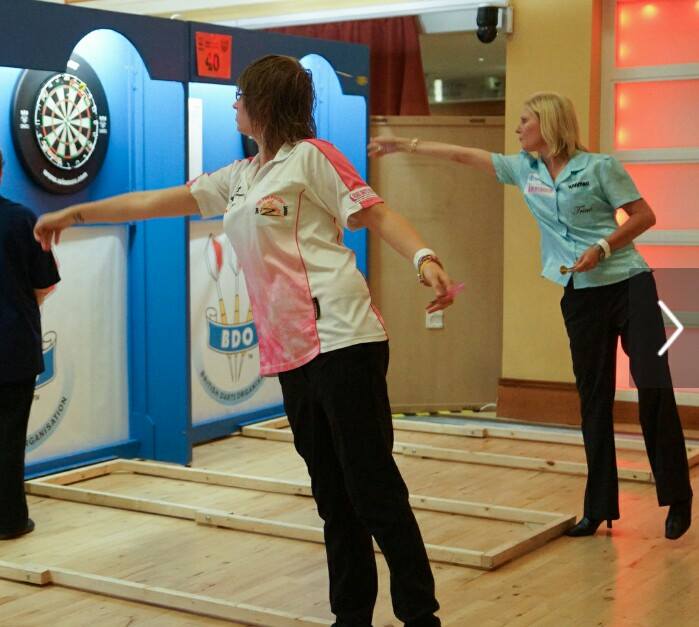 After a year of winning various tour titles including the Turkish Open, Jones made her bow on the famous Lakeside oche.

She defeated Sarah Brent by two sets to nil in round one but was eliminated in the last eight by Russia’s three-time world champion Anastasia Dobromyslova.

Although disappointed not to go further, Jones acknowledges it was her debut and believes the experience will help her on the road to her overall career aims.

“My performance at Lakeside was very under par for me, I didn’t play like I can and it got frustrating at times. However, it was my debut and I know what to expect next year.

“I did love it though, and it felt like home. The experience will undoubtedly help me in my quest to become the best I can be.

“My hopes for the future are the obvious ones, to be world champion, to be number one and to one day, I hope, dominate the ladies game.”

It was ‘The Lancashire Rose’ Lisa Ashton who ended up victorious after a thrilling final win over Fallon Sherrock.

Along with the trophy, Ashton received a cheque for £12,000. Although this seems a substantial amount, Scott Mitchell, the winner of the Mens side of the tournament, won £100,000.

This has left Jones, as well as the other female competitors feeling frustrated.

“Compared to the mens, the women’s prize money is dismal. We spend the exact same money as the men to travel to and enter competitions all year round, there’s no reason why the women should have any less money than the men, it needs to improve!”

Jones alluded to the commercial and financial equality seen in other sports as a benchmark, but doubts a change is imminent within female darts, despite it’s potential growth.

“We could definitely learn from other sports, especially tennis, where the females are paid in the same region as the male stars.

“However I can’t see anyone, male or female, having the confidence to stand up and fight for equal pay in the BDO. I couldn’t do it on my own.

“If it did happen, more women would play, we’d become bigger, and we’d therefore have a greater chance of becoming professionals.”

Despite that, Jones is delighted with the current standing of female darts, and has high hopes for the future.

“At the moment, ladies darts is on the up. We have the Ladies Darts Organisation (LDO), which is fantastic and has achieved ranking status over the last 18 months, and also this year’s Lakeside saw every women’s game being televised which is a massive step forward for us.

“We still have far to go but we’re getting there. In the near future, I’d love us to have our own tour, separate, with bigger money, more publicity. We’re getting there, one step at a time.”