In conversation with | Jak MCS

Jak MCS is a freelance illustrator, painter and designer, and a core member of Bristol-based free party collective and record label Jigsore Soundsystem. His roots lie in the south west rave scene, his heart lies with the DIY ethics of punk rock, and his art treads a line between brash and offensive, playful and political, and sinister and surreal, all underscored with a dark sense of humour.

Artefact caught up with Jak to get some background info on his unique styles.

Tell us about your background and introduction to illustration, graffiti and graphic art – how did you get into it all?

I got really put off art at school by my art teacher, so did music at college. But
soon realised I had no talent and went back to doodling, around the same time as
I got into graff [graffiti] – around 2003. My mum and dad always egged me into pursuing my artwork – Dad is a great cartoonist and my grandparents were also artists – so plenty of inspiration at home as a kid.

How would you describe your style in a sentence?

Shit. I guess lowbrow punk ethic… with some satanic black acid in there.

Who or what are some of the main influences behind your work?

Brendan McCarthy, John K, Jim Phillips, Tomer Hanuka, Geof Darrow, Ronald Searle, Robert Crumb, Magritte, Norman Rockwell, Bosch… I could go on and on – they’re just some artists I really like and nick styles and ideas from. I get most of my inspiration from music, films and books or I just dig ’em out the toilet.

Tell me about your techniques – do you work freehand or mainly digitally?

I sketch everything first, then I’ll compose the image from sketches and use a lightbox to ink it onto fresh paper. I colour either with inks and acrylics, or I’ll scan the illustration and use Photoshop.

Where can people see you work? Have you exhibited or any shows coming up?

I’ve done a few shows. I have one coming up in March for The Graffiti Life in London, and a solo show in Bristol in April or May – check my Facebook page for info! 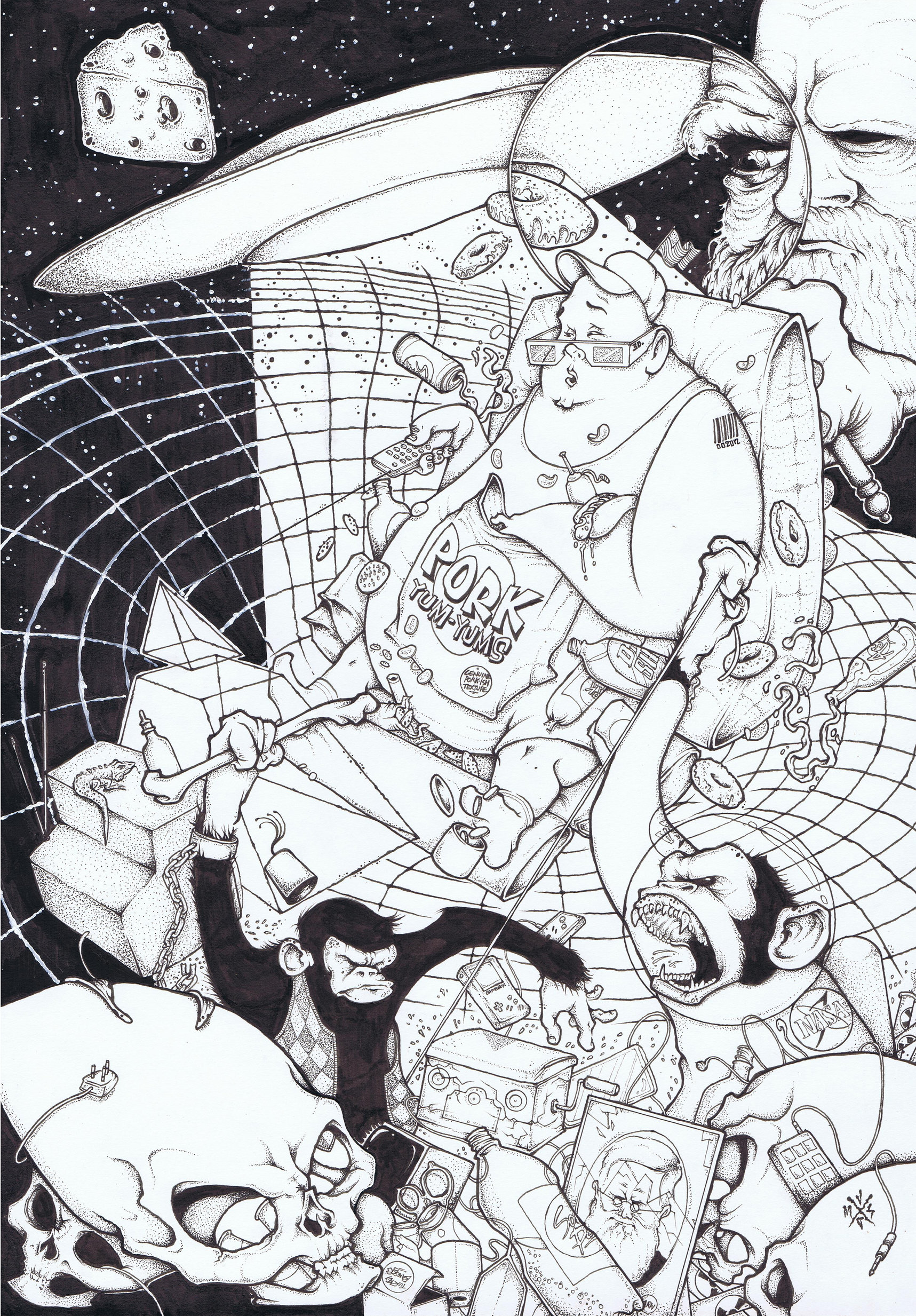 Tell us about your involvement in rave and free party culture and how that influences your work.

I’ve been lost in the rave scene for a while now! I don’t have as much involvement as I did though – it’s starting to take its toll, haha. I got into it around 2003 I guess – Bio Hazard and SOS [Soundsystem] parties in Devon, then Retox and Armada etc. The whole thing just blew me away – loved having a great laugh and knowing it was all illegal, it gave me a buzz.

I started messing about with the Jigsore posse around 2007 back in Cardiff. Soon after we started doing little club nights in a place called Chester’s in Bristol – that’s when we started to get a bit of a fanbase I guess. I don’t think the rave scene really inspired my ideas for my work – I guess the rebellious side did a bit, but I’ve always been a punk rock fan anyway, so I blame it more on that! There are a lot of rave type images I’ve done though, but usually ‘cos they are for a flyer or something like that. 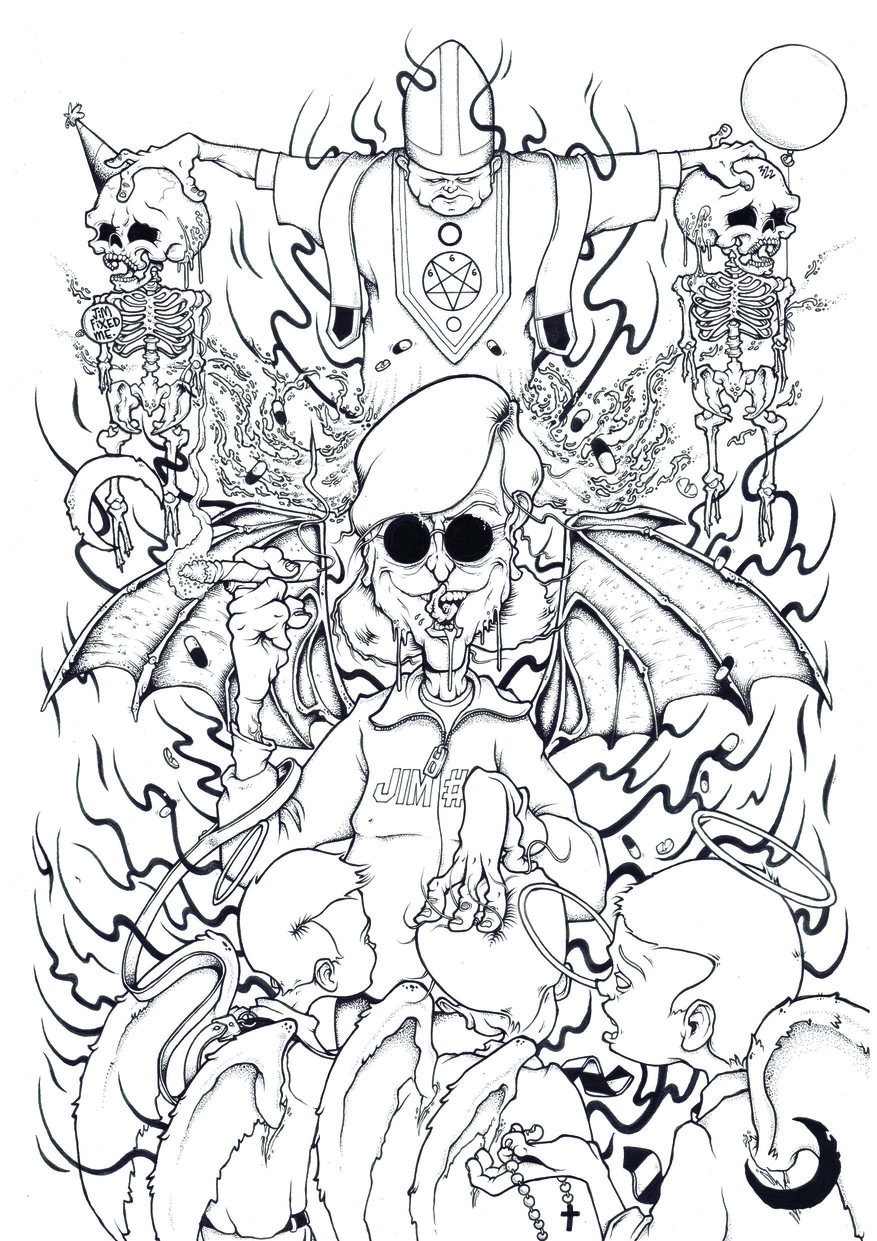 Are there any interesting projects coming up for Jak MCS?

Any shouts or final thoughts?

Big shout out to Mickey Kreeps (fellow Speed Freak), all my Jigsore crew! CNTS, and love to friends lost along the way – Craig, Gorf, Kate, Cheeseman & Enz One, to name a few. Peace and fucking. Believe.

All images by Jak MCS

By Rella Jefferies
5 Mins read
Set in the picturesque Paxton Centre at the heart of Crystal Palace, Everyone Reflects Light is an emotive exhibition that…