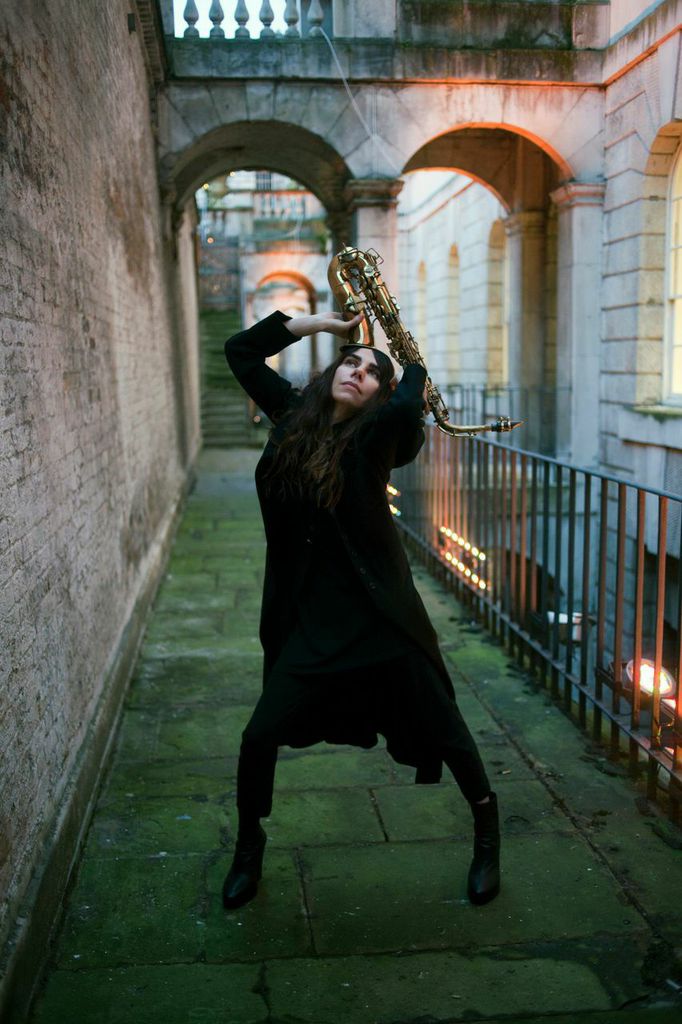 We walked down the stony steps, steps that hold so much history, into the heart of Somerset House. The quiet excitement amongst us was starting to mount into a frenzy of anticipation. There really was no telling what to expect. An hour of PJ doing voice exercises? Instruments being tuned relentlessly for ages? Maybe a lot less than that. We all congregated patiently around the door of the observation room and we could already hear her powerful vocals booming through the corridor.

Taking our positions around the one-way glass that held the boxed-in recording studio, it was apparent they were listening to a track that they had just recorded. PJ was nodding back and forth with her headphones, her boots slowly stomping to the rhythm. The studio space was a fascinating array of red and black cables scattered across the floor, clarinets, saxophones and trumpets gleaming in every direction. One of PJ’s distinctive rose painted harpsichords from the White Chalk era sat on a shelf behind her. It was all white – if a little clinical – aside from a giant PJ Harvey crest on the wall with a Ram entangled with a two-headed coyote.

This environment at Somerset House completely differs from working in a church scenically set over a clifftop where she recorded Let England Shake in Eype, Dorset. Or the Townhouse recording studios for To Bring You My Love, which sat beneath Battersea Power Station. She was drawn to Somerset House due to its resonance, good acoustics and history with royalty and the navy; never turning down the chance to experiment.

Alessandro Stefana, clarinet, and Terry Edwards, saxophone, were working on their synchronisation together as PJ and one of her producers, John Parish, gave suggestions. One thing I gathered is that her ninth studio album is going to be very jazzy, for sure. They took a couple of different takes, changing the pitch and key. As they spoke about trying to sandwich one of the verses and chorus together I was enamoured by PJ’s really sweet, encouraging nature. I would have totally understood if PJ had been very serious during the recording process, but this wasn’t the case.

When the band seemed to have successfully completed the finishing touches to the track, PJ called out: “Time for lunch now, isn’t it?”

Our guide announced that our session was now up and it was time to head back upstairs. Although the hour passed very quickly, and we didn’t get to hear PJ sing, it was still a really compelling experience. It’s not everyday that one of the most critically-acclaimed British singer/songwriters allows you to witness their creative process like that.

Fans can observe the recording process and take part in PJ Harvey’s latest musical experiment at Somerset House until February 14.