I am Charlie, but I am Baga too 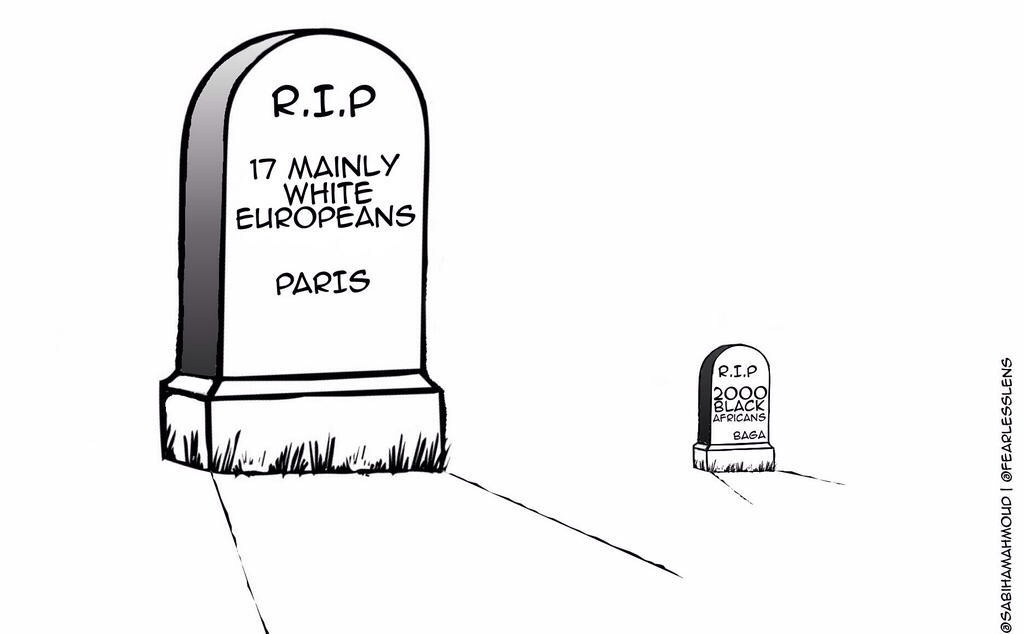 The world reacted with horror after 12 people were killed in the Charlie Hebdo offices in Paris, placing France at the centre of the global stage. The mass shooting shocked the world and reignited the debate on freedom of speech. While #JeSuisCharlie trended on Twitter, 3.7 million people took to the French streets in protest and seven million subsequently purchased the next issue of Charlie Hebdo, to pay homage to the dead.

But as the world mourned the Parisian twelve, in North East Nigeria 2,000 people lay dead in Baga, in a massacre that was largely unheard of among the worldwide community.

Boko Haram caused a global outcry last year after kidnapping schoolgirls from Chibok, a town in the north eastern Nigerian state of Borno. When the 276 girls were abducted, the world united in condemnation of the attacks. But how is it that the same world could have ignored the latest atrocity in Nigeria? Is it a matter of timing, ideology, or are there vested interests of the media at play?

What saddened me more was seeing President Jonathan gallivanting at his niece’s wedding while 2,000 Nigerians lay dead in his backyard.

At a time when people are declaring #blacklivesmatter and 2,000 Africans die without the world’s media even flinching, questions have to be raised. Events in Ferguson in the US may have initiated the #blacklivesmatter Twitter campaign, but it was the horrific scale of the Baga massacre that really begged the question: do black lives really matter?

As a black British person it makes me feel as if black lives are not as valued; it’s easy for me to be enraged at the lack of coverage and believe there is a racist agenda. However, as a British Nigerian, I need to look closer to home.

It was not just the western media that remained silent. Nigerian politicians and journalists stayed tight-lipped as well. What saddened me more was seeing President Goodluck Jonathan celebrating at his niece’s wedding while 2,000 lay dead in his backyard. Jonathan commented on the French massacre yet stayed quiet about the slaughter in his own country.

His silence over the issues affecting his own country is nothing new. He also kept quiet for a long period after the schoolgirls were kidnapped last year. For the Nigerian and foreign press, gaining access into areas dominated by Boko Haram is next to impossible. Baga is a no-go-zone, just as Raqqa and Idlib in Syria and Mosul in Iraq are isolated from the foreign press due to the dominance of ISIS.

With attacks taking place in the insurgent stronghold of north-eastern Nigeria, it is important to note that President Goodluck Jonathan is a Christian southerner from Bayelsa state. Even though these states are all part of Nigeria, the south and the north have significant cultural differences. In a country with over 300 ethnic groups, there’s already a lack of unity and sense of common purpose. The north and south divide in Nigeria is an obstacle which makes it much harder for people in the south to empathise with the victims of Boko Haram in the north.

Nigeria’s lack of unity is in sharp contrast with France’s united front against terrorism. The clear message of solidarity against terrorism has made it easier for the western media networks and audiences to collectively empathise with the Parisians. The West not only watched the solidarity in France, but could also relate.

The shootings at the Charlie Hebdo offices generated many discussions on Muslim integration and Islamophobia among western nations. In Britain, where right wing parties such as UKIP are gaining in momentum by capitalising on issues such as immigration, it was all too easy for these events to be perceived as a result of contentious immigration policy.

It’s easier for people in the West to relate to the attacks in Paris as it is on their doorstep. France has not suffered such an act of terrorism since 28 people were killed in the 1961 Vitry-Le-François train bombing carried out by the Organisation de l’armée secrète.

Soon after the attacks in Baga, in neighbouring Maiduguri, explosives were strapped to a ten year-old girl. Although guards stopped the girl, the bomb detonated and killed at least 19 people. Tragedy is becoming all too familiar in Nigeria and, I fear, people are losing hope as they feel there is nothing they can do about it.

Compared to Paris and other Nigerian states like Abuja and Lagos, northern Nigeria has very low rates of internet connectivity and so lacks an online presence. The people attacked in Baga were also cut off from the rest of Nigeria, and have very little chance of being noticed by the rest of the world.

Journalists are fearful of reporting in the area. To report Nigeria’s problems, journalists now travel instead to neighbouring countries like Ghana and South Africa, situated hundreds and hundreds of miles away. The fact that there are no local journalists to feed back information makes it extremely hard for Western news networks to report on events in Borno state. However, the Paris attacks have brought up a wider debate on Islamic extremism, which is also the root cause of the Baga massacre.

It’s a sad day being a Nigerian when I hear more American celebrities, like rapper Meek Mill, asking about why Nigeria has been ignored by the politicians. Just as I was horrified by the shootings in Paris, I was struck numb when I heard about the Baga slaughter. The global responses for these two tragedies shouldn’t be any different, as both massacres are equally deplorable in spirit. We should all be saying Je Suis Charlie, but also, Je Suis Baga.