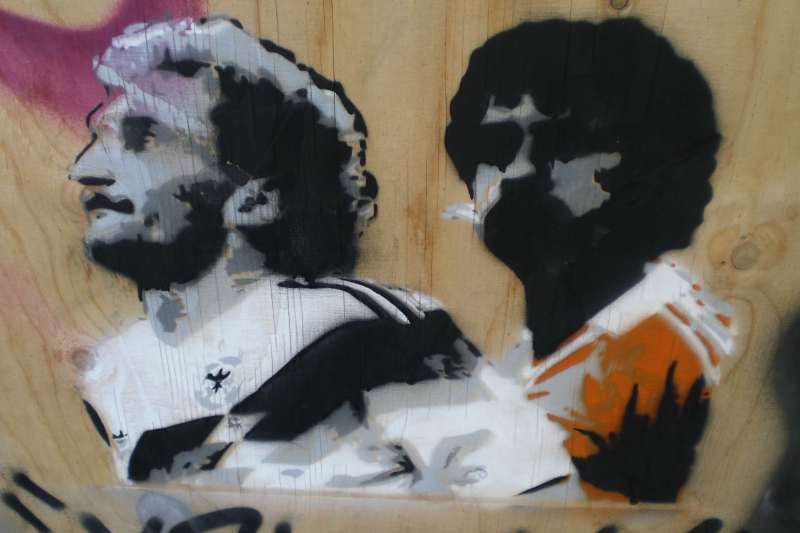 Artefact Sports writers Guido de Boer and Max Petch argue the case for two of the biggest rivalries in football.

Deep down, I think every country wishes to be ‘the’ country which Germany enjoys beating the most. With that thought in the back of their head, a win over Germany is what every country deeply desires. But from a Dutch point of view, I think we are that country.

The origins of the rivalry for the Dutch are predominantly based on the anti-German sentiment that arose during the Second World War. Holland wanted to maintain the neutrality it achieved in WWI but was invaded and bombed by the Germans.

In the early 1970s Amsterdam’s Ajax were the most dominant club in Europe and won three consecutive European titles with Johan Cruyff at the heart of the attack. Cruyff, the legendary “number 14”, was in the form of his life and played a big role in guiding Holland to the 1974 World Cup final against West Germany. A penalty given in the second minute of the game saw Holland taking an early lead without one German player having touched the ball. What should have become a fairy tale ended in misery. Germany turned the tide and went on to beat the Oranje 2-1.

It meant the end of an era for Holland. The World Cup taken from under their noses, and Bayern Munich ended Ajax’s reign in Europe, and themselves went on to secure three consecutive European titles.

The World Cup defeat was seen in Holland as the mother of all defeats. Midfielder Willem van Hanegem, whose father and two brothers had died in the war, refused to attend the post-match banquet, saying: “I don’t like Germany, I hate them. They murdered my family, my father, my sister, two of my brothers.”

Former German international Franz Beckenbauer was a central player when the rivalry erupted again in the 1970s. He told the BBC in 2012: “Matches against Holland have cost me years of my life. But I wouldn’t have missed them for anything. Those matches always breathed football of class, emotion and unprecedented tension.”

It was around this time that people such as Marco van Basten, Ruud Gullit and Frank Rijkaard were growing up and saw their country lose.

Holland got their revenge in 1988, a nearly perfect display by the Dutch with Rijkaard, Van Basten and Ruud Gullit under the guidance of Rinus Michels beating West Germany in the semi-final. Holland eventually went on to beat Russia in the final, their first and only international title.

Winning the tournament is still the greatest achievement in the Oranje’s history, but beating the Germans in the semi–final released a sense of relief, freedom and liberation among the Dutch. Nine million people, approximately 60 per cent of the population, filled the streets in Holland celebrating the victory and holding bicycles above their heads singing: “In 1940 they came! In 1988 we came,” It all goes back to the Second World War when the Germans confiscated every single bicycle. National manager Rinus Michels described the victory as revenge, which shows how important this victory has been in the Dutch history.

Perhaps one of the most outstanding moments in that semi–final against West Germany is when Frank Rijkaard spat in opponent Rudi Völler’s hair. Though it is obviously an outrageous thing to do, the Dutch regarded it as a payback on their behalf.

Though tensions have eased, a clash between the two neighbours is still regarded as one of the most important games.

As midfielder Wesley Sneijder describes it: “It’s the game. The biggest Holland can play. I grew up watching these games on television and they’re always something different. I’ve dreamt of playing and scoring the winner against the Germans.”

And it’s true. As a Dutch person we dream of a victory over the Germans. The majority of people in Holland have not lived in war times and would be outrageous I believe to use still emphasise the element of war when playing football. Holland V Germany is a game between neighbours or brothers where the younger one desperately wants to beat the older one. As Dutch fans chanted after their team had reached the quarter–finals of Euro 2004 at the expense of the Germans: “Schade Deutschland, alles ist vorbei” [Pity Germany, it’s all over].

Whilst some may argue for others, in my opinion there is only one big rivalry that lives up to its hype and expectation – the Old Firm derby between Celtic and Rangers.

If you asked an Argentinian ‘what’s the biggest rivalry in football?’ he would say that the Superclasico between Boca Juniors and River Plate, whilst a Turkish fan would say the fierce Turkish derby of Galatasary vs. Fenerbache is the only candidate, I think you get the picture. Whilst they all argue a strong case, personally for me growing up in the UK the Old Firm derby is the fiercest of the lot.

With both clubs heralding from the same city, Glasgow, Celtic and Rangers have been slugging it out in more than 400 derby matches and both can lay claim to being Scotland and Glasgows biggest club.

However it’s not just the geographical location that adds to the rivalry, it’s the rich history of each of the clubs and what they stand for. Both are steeped in religious heritage, Rangers’ roots stay true to the Protestant church and unifying of the United Kingdom. It is a common sight to see fans waving the Union flag on match day, showcasing their strong moral beliefs towards the club.

Celtic on the other hand sees it’s foundations rooted in the Irish Catholic church, with the Irish clover leaf being the club’s iconic badge. Much like their rivals, Celtic fans display the Irish tri-colour flags on match day, turning Parkhead into a sea of green, white and orange.

With both sets of teams having their alliances to rival faiths, the passion and hatred between the two sets of fans has run deep through the history of the Old Firm derby. The city of Glasgow becomes a propaganda war zone on match day with you either being a Rangers fan or a Celtic fan.

I admit that other rivalries showcase the better football with some of the world’s finest players. You only have to look at last year’s Champions League final which was the Madrid derby between Real and Atletico as an example, but the fans behind the two Spanish giants can’t hold a candle to the intense rivalry that is demonstrated between Rangers and Celtic.

Whilst the clubs may not capture some of the world’s greatest players, the ones who have experienced first hand the significance of the derby say you cannot prepare for what the derby means for each of the clubs and fans. One player – Mo Johnston – has managed to alienate the fans of both clubs. He played for Celtic in the late 80s before for leaving for France in 1987. When he rejoined the Scottish league he was signed up by for Rangers and his move sparked fury amongst both sets of fans. Season ticket holders at Rangers cancelled their tickets at the club whilst Johnston was simply public enemy number one at Celtic. His move to Rangers still creates anger today, highlighting passion, loyalty and dedication that is shown by the fans.

“I have personally played in the North London Derby, a Midlands Derby when I was at Coventry. At international level I have played against England in a World Cup game but nothing prepares you for a Celtic Rangers match.”