March 2015 sees two of the UK’s top electronic music promoters return to their much loved weekend formats, following a turbulent couple of years for both Bloc and Bangface.

Bloc made their name hosting weekend-long festivals at Pontins and Butlins holiday camps in Hemsby and Minehead between 2005-11, showcasing a who’s who of underground electronic music artists along the way.

Their decision to throw an up-scaled two day event for 18,000 people at London Pleasure Gardens in 2012 turned into disaster, when overcrowding forced the event to close within hours on its first night.

Bangface had similar problems when their plans for a 2013 weekender in Newquay had to be cancelled in advance due to licensing restrictions.

It was Bloc who came away worst-off, with their ill-fated 2012 event forcing them into administration and a huge online backlash leaving their reputation in tatters.

However, the brand has been successfully rebuilt in the time since, scaling back to smaller club events at their Hackney warehouse venue Autumn Street Studios.

2015 promises to be an important chapter in the Bloc comeback story, returning to Butlins at Minehead between March 13-15. It’s a move that Bloc co-founder George Hull describes as if “we have walked through the desert to the promised land”.

In his opinion, the weekender festival format is one that can’t be beaten: “As much as I – and thousands like I – love it personally, it has actually been objectively tested and verified that the weekender format is the finest format that exists for showcasing late-night, high-intensity electronic music. You have purpose built indoor auditoriums, a lovely little house to hang out in before and after, and not a wellington boot in sight,” said Hull.

Bloc’s lineup boasts the cream of the global electronic music crop, with the likes of Jon Hopkins, Jeff Mills, Autechre and Carl Craig topping the bill and showcases from Ostgut Ton, Boiler Room, Numbers, and many more.

Bangface Weekender touches down at Pontins in Southport, March 20-22, bringing with it a line–up hand-picked from the harder end of the rave spectrum, and their notoriously hedonistic vibe.

Prior to their failed 2013 event, the Bangface crew hosted weekender events at Pontins, Camber Sands, and Trevelgue Holiday Park, Newquay, as well as regular London club nights, boat parties and takeovers at Glastonbury and Glade festivals.

Marking their 100th event, the 2015 weekender looks set to be a monstrous return to the holiday camp format, with Squarepusher, Roni Size, Venetian Snares and David Rodigan headlining proceedings, alongside showcases from the likes of Planet Mu and Wrong Music, and an all-star lineup of jungle, techno, breakcore, acid, gabba and electro luminaries. 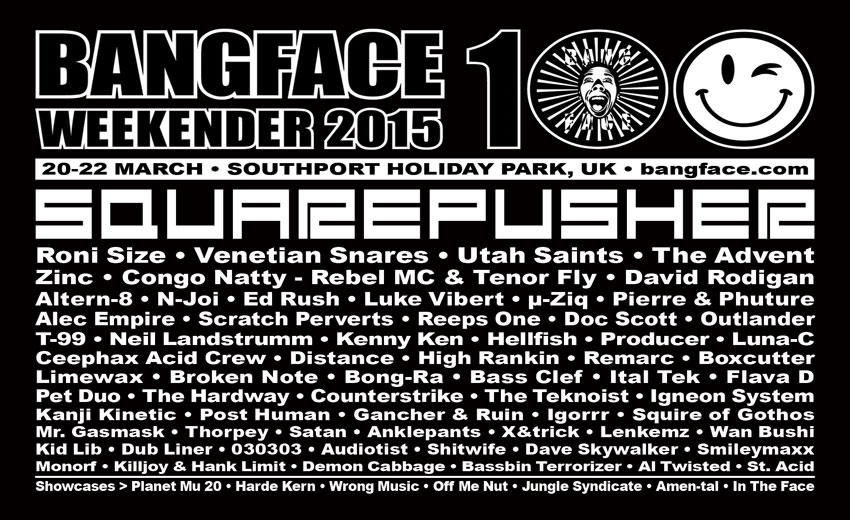 “It’s been a long time coming, thanks to a combination of lacking suitable venues and Draconian licensing laws, but finally it’s able to happen again.”  “Bangface is like a family rave and it’s great that so many people, new and old, can enjoy a weekend of hedonism once again,” says Ben.

“If you haven’t been to a weekender yet, but are familiar with the London-based events, expect Bangface on steroids!” “Bigger in set, budget and crowd noise, with loads more going on and its own TV station and pool parties to boot! Get your sleep in beforehand, because there’s so much going on you won’t want to miss any of it,” warns Dave.

Check out Aphex Twin performing at Bangface Weekender 2012 below for a taste of the action.

For full linuep and ticket info head to the Bloc and Bangface websites.