Miranda July: ‘I get to sit in my pyjamas and not be polite – for years’ 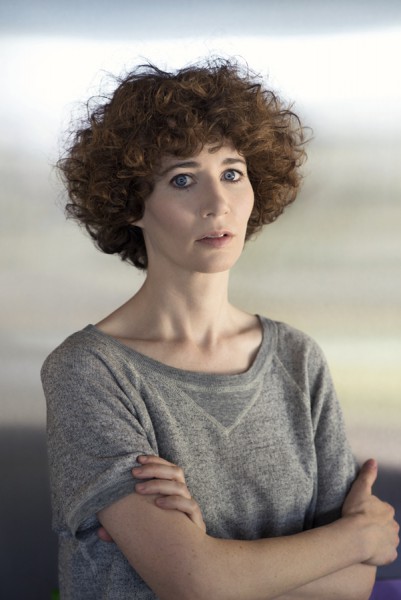 Multi-talented American artist Miranda July came to London for an evening of conversation at the Purcell Room, Southbank Centre to celebrate her debut novel The First Bad Man.

The impossible-to-pigeonhole July’s previous work span a wide range of different media, including performance art, short stories and movies – and even an app that allows text messages to be delivered in person by strangers.

Her short story collection No One Belongs Here More Than You from 2005 won the Frank O’Connor International Short Story Award.

She wrote, directed and starred in Me and You and Everyone We Know which received a special jury prize at the Sundance Film Festival and the Caméra d’Or at the Cannes Film Festival, and her second full length-feature The Future was released in 2011.

Her first novel, The First Bad Man follows Cheryl, a 40-something woman who lives alone and is obsessed with Phil, a board member at the women’s self-defense nonprofit where she works.

Cheryl has her world turned upside down when Clee, a 20-year old mean, “porny-looking” bombshell moves in with her. The book has been described as dirty, tender and hilarious and explores sexual obsession, fantasy and maternal love.

At the sold-out event, July discussed the book and answered questions from the audience. She jokingly asked the crowd to “spread the word” about a misquote in Stylist, where they had written she was influenced by Sarah Crossan’s young adult novel Breathe, when in fact the book in question was Breed by Chase Novak.

She talked about her writing process, moving between different media, and how being pregnant made her feel a little bit like “a man who would fuck and get into a lot of bar fights”

Here’s a taste of what we learned from Miranda July at Southbank Centre:

On working alone vs. collaborating with others

“Working alone is a lot more comfortable for me, they’re both total hell, but there’s the hell where it’s all on you and that’s a tremendous pressure, but you’re not bossing people around and stuff like that. When working alone, I get to sit in my pyjamas and not be polite… for years.”

“There are many times I’ve pitched movies to companies and left the building and been like ‘fuck you all! Fuck! Fuck up everything! We are enemies always, forever.’ There is a place for that too.”

On switching between different media:

“I always feel like a faker in each medium, like ‘I’m not a real author, I’m not a real filmmaker, I’m not a real performer.’ There’s so many years between each thing and I’m getting older and older and I only made so many movies. You could really make yourself go crazy with that, so I give up and just think ‘It’s a good life for me,’ regardless of what anyone else might think or regardless of membership in any of these clubs or how I’m perceived.”

On creating an app:

“I’m super duper controlling so even if it’s an app that I know nothing about the whole process of, I’ll hire my own outside designer, not the app designer, because app designers  make things that look like apps.”

On having a beginner’s approach:

“I think that kind of off-kilter non-professional approach – that feels like artistry to me. That what feels like art. I think that’s one of the reasons I do it, to always keep that novicey feeling. People don’t love it, if you’re on a film set you probably don’t want your director to be super into what she doesn’t know. But that experty thing always rides me right into a wall. I just get stuck creatively or embarrass myself.”

On pregnancy, motherhood and staying creative:

“My whole world changed. But the one thing that stayed the same was that I was still writing a book, on the other side. Even if half the time that was happening just in my head while I was nursing or bouncing on this fucking ball thing, talking into a voice memo because I wasn’t able to write, it was like my little secret, I would think: ‘well, I’m still alive, the baby is still alive, and I still got my book.’ I’d say the difference now is that I don’t spend all the time thinking about my thinking. I don’t spend a whole Sunday wondering who I am.”

The First Bad Man by Miranda July is out now

Miranda July: ‘I get to sit in my pyjamas and not be polite – for years’

Exhibitions | Mirrorcity at the Southbank