Sleepless study sessions, greasy takeaways, piles of dirty plates and drinking session with your roomies – these are the images that come to mind when thinking of student accommodation.

In the Netherlands, however, privately-rented flats shared by students are transformed annually into small venues for mini-gigs, film screenings and poetry readings that are open to the public.

It is the only place in Europe where it happens, and I went along to sample its delights.

The Stukafest festival takes place across Holland every year and is nearing its 15th anniversary. During this year’s, hundreds of student houses in 13 different cities were temporarily transformed into tiny entertainment and cultural hubs.

Organised by local councils, the first-ever one took place in Nijmegen in 2001. It was inspired by the Broadway Festivals in Lubbock, Texas, to promote culture on campus.

I went to Rotterdam in January, a city which has been hosting Stukafest events for eight years. There were 11 houses opening in the city that day, and people could go to a maximum of three events for just €11.

I opted for a film viewing followed by performances featuring two Dutch bands. The venues, just a 15-minute walk from each other, lay in an extremely quiet neighbourhood – a stark contrast to the crowded scenes inside them.

After a brief struggle with Google Maps, I finally reached the doorstep of my first student house and rang the bell. I was welcomed by friendly faces and the sound of chatter; a girl asked my name then led me in to join the others.

I was then taken to a simply decorated living room where the furniture had been moved aside to make space for everyone to sit down on a mattress placed in the middle. Lemon beer and snacks were served, and everyone made themselves comfortable ready to watch the films projected onto the wall. 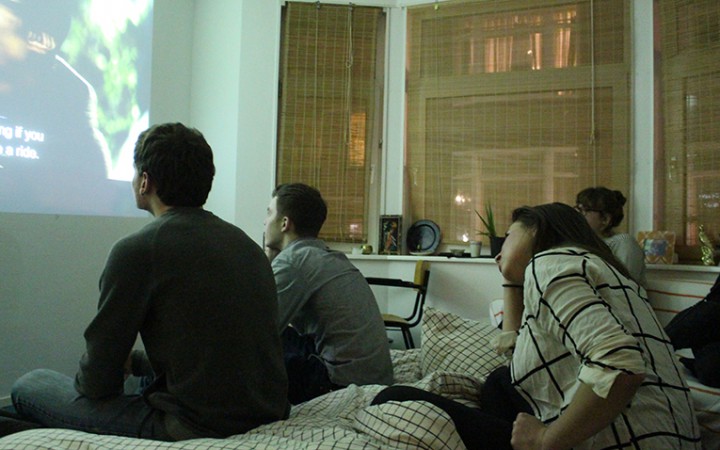 Students gather around to watch a film screening projected on the wall.

It began with a one-minute graphical film Flatten by Hugo de Kok and Kay van Vree, which explores forms and shapes in daily lives, followed by Pedro Collantes’s Japanese exotic drama Serori that features a mature woman’s emotional encounter with a young boy.

There were ten people in the room, which made it pretty cosy to say the least. At the end, everyone was asked whether they enjoyed the films, and the audience was generally happy about the selection. 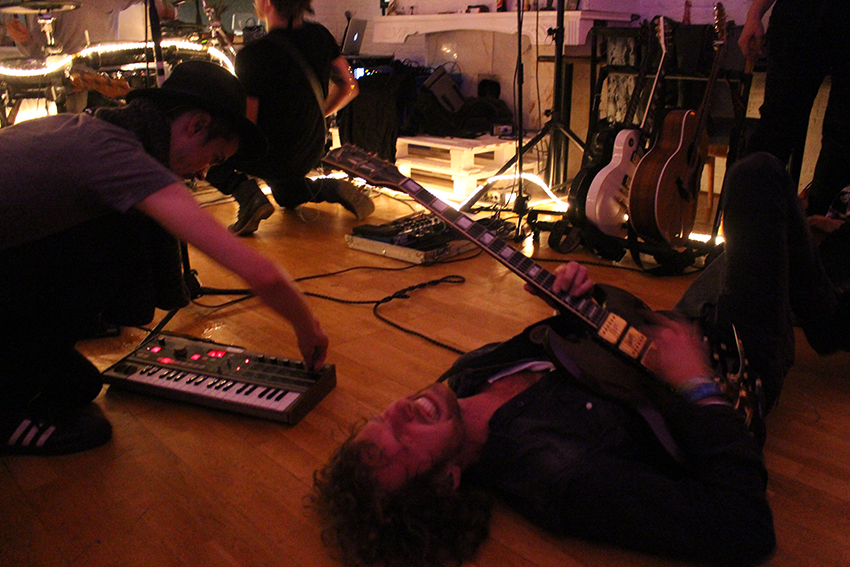 HeavyLight draw inspiration from bands like Kings of Leon, Coldplay and Pink Floyd.

The next part of my Stukafest experience involved bluegrass and Americana rock band Cannonball Johnsons, who’ve gained a fair bit of popularity outside of the Netherlands.

They delivered a heavily acoustic set with a range of instruments including guitars, banjos, percussion, slide guitar, harmonica, mandolin, bass and accordion. Due to their popularity on YouTube, their performance was the most crowded house amongst all the Stukafest venues.

Over 30 people of all ages gathered to listen to their engaging songs, and their latest album was on sale at the scene.

Lastly, I visited another house to watch Rotterdam-based rock band HeavyLight perform. Formed in 2011, their style has been compared to British rock and they have played at many music festivals.

HeavyLight demonstrated real prowess, interacting with their audience, performing as though there were thousands of people in the room – instead of 13 – and everyone danced and sang along to the music.

Stukafest was a success, with all tickets sold out three days before it started. Something similar in London would go down a storm and would be a great way to showcase the talents of upcoming bands, comedians and poets in intimate settings.