Into the Studio: Wilfrid Wood’s world of sculpture

Among the labyrinth of industrial complexes, warehouses and factories in Hackney, I finally managed to track down legendary 3D sculptor Wilfrid Wood’s studio building, waiting by its very neatly concealed, inconspicuous entrance. Full of enthusiasm and wielding a crafty sense of humour, Wood pops down and unlocks the graffiti–painted door, leading the way through the pitch-black hallway up to his studio space. “The place is a bit of mess!” he warns me before opening the door.

In actual fact his studio is a haven of neatly stacked treasures. It’s a comfy space, reminiscent of a carpenter’s workshop but instead the shelves are full of striking sculptures of every size and shape; the twisted cartoonish expressions laughing, crying, grimacing and smirking back in unison. There is a dog head with cascading locks of curly hair, Paul McCartney’s head giving a rather withered, gormless smile with two thumbs up, and a miniature Simon Cowell looking clinically obese; all funny in their own, unique way.

Wilfrid Wood is self-taught. Originally starting out in graphic design, Wood eventually ditched his day job working for a publisher. He then landed a new gig working as a head constructor for the controversial 1980s TV puppet show Spitting Image. Since then he’s been able to concentrate on his own artistic pursuits.

He explains: “It was great all-round training into 3D. From then, I kept doing a bit of graphics to earn a bit of money and started stuff in 3D, early, primitive, simple little characters. Then gradually over the years I’ve done less and less graphics – I don’t do any at all now, and just concentrate on sculpting.” 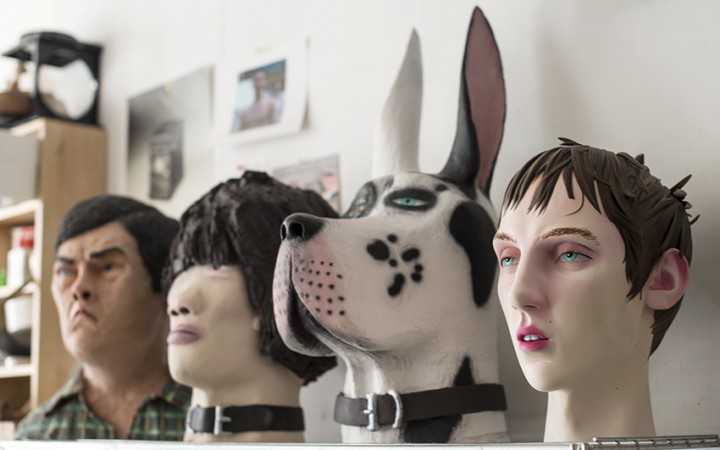 A series of heads by Wilfrid Wood [Mary Clarke]

Wood describes himself as a satirical sculptor, continuing to dabble in portraying political figureheads in his own fashion, including making a sculpture of a portly David Cameron in his swimming trunks and a baby-faced Vladimir Putin: “Putin has got an incredible face. I saw a photograph of him when he was young; he was incredibly beautiful in a weird sort of way… I found it interesting, the idea of a boy and what that boy will become and could I hint at some slightly sinister overtones even in this portrait of a youngish boy.”

[pullquote align=”right”]”Putin has got an incredible face. I saw a photograph of him when he was young; he was incredibly beautiful in a weird sort of way”[/pullquote]His attention has turned to dogs, and these sculptures featured in an exhibition in London over the Christmas period. It takes two to three weeks to make one of his sculptures on average. A range of breeds pepper the studio, as well as internet stars like Jiff the Pomeranian and Faith the two-legged Labrador. “The show I had previous to that was a general retrospective of all sorts of stuff I had done but it was a bit unfocused. So for the last one, I wanted to make it absolutely clear – it means I can do dogs and their owners, people holding dogs, full figures with dogs, just dog heads, whole dogs, disabled dogs- you name it. Plus I like dogs; they’re super characterful so they suit my interest in portraits in character.”

One that particularly mesmerised me was the Morrissey Terrier, a hilarious creation depicting Morrissey (with a huge, elongated chin) and terrier body. Wood elaborates: “I’m a massive old fan of Morrissey but, oh gosh, he tests everyone’s patience these days. And he’s such a terrier so I thought ‘Morrissey Terrier’. When I make something, people love to tell me everyone else it looks like, saying that it looks more like Henry Rollins. I did another coloured head of David Bowie and people often say it’s Cilla Black.” 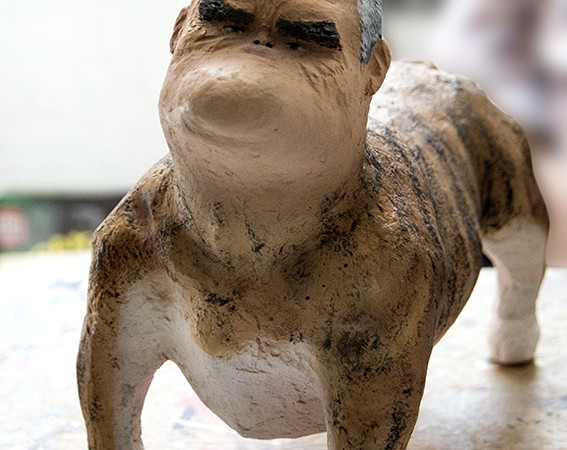 Another set of amusing sculptures Wood shows me are of nude to semi-nude men taking selfies with their dogs. “It’s more like the kind of photos you see on Grindr. Or Tinder if that’s more up people’s street. It’s those self-conscious but slightly vain men trying to make the best out of themselves standing in front of the mirror with a cute dog to hopefully cheer the whole situation up.” This is indeed a frightening but an accurate representation of the iPhone generation.

Wood gets many commissions too, working on figures for the likes of The New Yorker, Nike, David Choe and CocknBullKid. Wood told me about the set of heads he worked on for Nike, (which were strategically displayed around the company’s Oxford Circus store): “They’ve got a kind of demographic that they call FOT’s [aka] ‘football obsessed teenagers.’ So they said ‘Can you make four heads of FOT’s?’ I didn’t know what they were; I’ve got no interest in football whatsoever.

[pullquote align=”right”]“I’m a massive old fan of Morrissey but, oh gosh, he tests everyone’s patience these days. And he’s such a terrier so I thought ‘Morrissey Terrier”[/pullquote]”But I can immediately see screaming fans is a good subject, I just turn it round to something I can identify with and enjoy doing but I think people usually come to me because they’ve seen my work in the past. And hopefully they come to me for ideas, not for my superb model making skills, they’re okay but you could probably go to a professional model maker and get something made quicker, cheaper and more finely finished. But what I hope I’ve got is ideas and an attitude.” Wood certainly has got a vibrant take on things, even his more serious pieces are bold and full of personality.

Wood sources his inspiration from seeing peculiar people in the street, flicking through magazines and from wasting time on the web every now and again. He’s always studying expressions and little details to try and reinterpret through his own sculptures. He goes on: “It’s very possible to get side lined into so-called ‘research’ – you definitely have to set limits to research because it can just become an addictive time–waster. It’s important to turn the computer off every now and again and get back to basics for me.”

He’s just as hooked on Instagram as most, citing that he’s discovered artists he wouldn’t have known had it not been for endlessly scrolling through his iPhone, but still contemplates the absurdity that it can bring. “It’s interesting to think what things will be like in 25 years, how will we look back at this period? It might be that this is a sort of blip in the early history of the Internet where this will be considered a mad period. Where people took photos of themselves half-naked, what they have for breakfast, their kids, all their details online, which might suddenly be regarded as absolutely crazy! Even in 10 years! It’s all changing so rapidly. If you can get on top of something like Instagram and put out some interesting images and get some followers then it’s a great opportunity to get your work seen.” 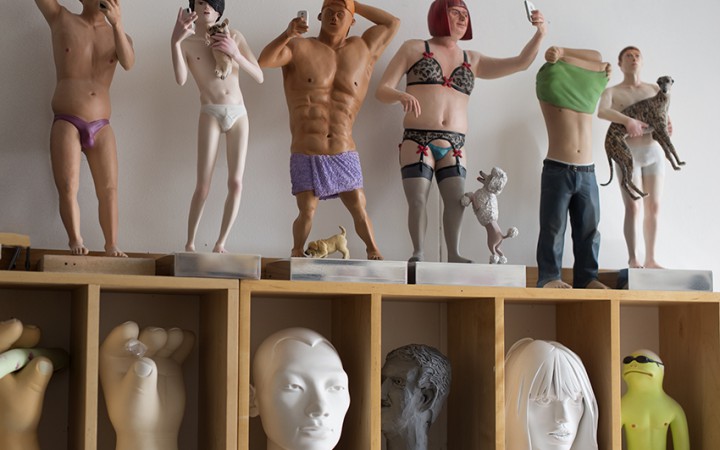 A series of figures by Wilfrid Wood [Mary Clarke]

The sculptures are created with papier-mâché, polymer clay and plasticine – which I stupidly mistake for Play–Doh. A multi-coloured assortment of squidgy plasticine pieces lay across Wood’s desk. He’s experimented with bronze in the past but found it too heavy and a tad on the pricey side to put together. Das modelling clay is another material Wood’s been trying out too as he picks a statue of Mark Zuckerberg from the window ledge – the likeness is uncanny.

Finishing off our tea and mini-chocolate croissants, Wood jokes that at some point he’d like to sculpt Michael Keaton in his underpants, having watched Birdman.

But what can we expect next from the Central Saint Martins alumnus? “The next thing I want to do is portraits. Obviously that’s a broad subject, probably heads. It might have some full people in it. I think a portrait is something everyone understands and that I do anyway almost all the time. It might change and evolve but at the moment that’s what I’m looking at.”

Slightly ambiguous, but I guess we’ll have to expect the unexpected and I’m sure Wood’s next set will also have us giggling.

By Stella Schmieder
1 Mins read
Insects might be the future of dog food. We spoke to Sabrina Jaap, co-founder of Tenetrio, to discover how these new-age treats are ethically made.
Lifestyle

By Alice Stoner
4 Mins read
In the midst of our third lockdown many people are buying puppies to help get them through mentally. But are these pets coming at a price higher than just money?
Music

By Cree Brown
10 Mins read
Tribute acts are a well known form of musician that immaculately imitate iconic celebrities. But who are the individuals behind the acts?