How Weapons of Reason can change the world 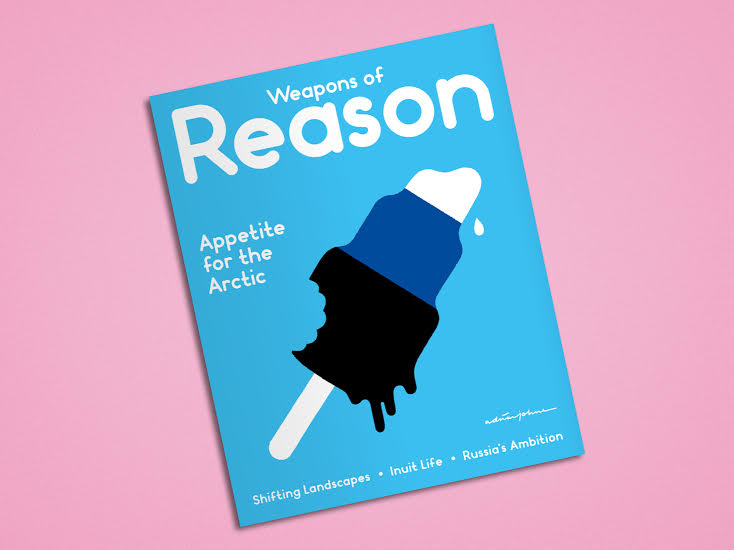 Weapons of Reason offers a way to understanding the world’s problems and reveals some answers. Over eight issues, its contributors explore eight key interconnected issues which are currently affecting the planet.

It is the brainchild of Danny Miller, the founder of Little White Lies magazine, and its objective is to involve as many people as possible as a way of coming up with solutions to the contemporary problems we all face; harnessing the power of communication and creativity.

Many of these challenges tackled by the contributors have both political and social origins. The world is growing and resources are running low; the certainties of previous generations have been undermined and ultimately replaced, in some part, with concerns over how we can reach conclusions that benefit everybody often out of reach.

Events are threatening to redraw some of the regions where oil has been sourced for years, meaning that new sources of oil are becoming increasingly sought after.

One of those areas, the Arctic, is the subject of Weapons of Reason‘s first issue. A 2009 study by US Geological Survey revealed there are to be 160 billion barrels of oil under the Arctic Ocean – almost double the previous estimate.

That could be as much as 30 per cent of the world’s untapped oil reserves, and the fact that two of the most powerful nations on Earth, America and Russia, have coastlines within the Arctic Circle is a worry for some; particularly in the context of the latter’s re-emergence as a geo-political power.

“The Arctic is not likely to become an area of dispute. Rather, it’s actually an area of great international co-operation”

However, that is not a view shared by Danny Miller, who has seen in his work for the magazine’s first issue that the Arctic is a place for hope, not tension.

“Everything we’ve learned about the Arctic during our time spent researching our first issue of Weapons of Reason suggests that The Arctic is not likely to become an area of dispute. Rather, it’s actually an area of great international co-operation – especially considering that it’s land-mass is comprised of eight countries who are thousands of miles away from each other, across a vast ocean. The Arctic’s resources will be developed – there can be no doubt – but if countries can work together to ensure that this happens responsibly and safely, then dispute seems unlikely.”

The distance between those countries may well be a comfort for those worried about potential struggles over the Arctic’s treasures, but Greenpeace have in the past spoken of how, in the case of an oil spillage, the size of the territory would make any clean up almost impossible.

Danny Miller’s belief in the world’s ability to cooperate goes beyond the realms of geo-politics. The need to do more is part of the reason why Weapons of Reason was founded in the first place – to communicate in order to find solutions and to communicate in order to disseminate them as widely as possible. The lack of that already is, to the founders of Weapons of Reason, the biggest problem of all.

“For me the greatest problem isn’t any one issue – it’s the communication of any given problem. The challenge is connecting individuals with important information that they might not otherwise be interested in. And that’s exactly where creativity comes in. We can use our editorial, design, illustrative and other creative skills to find new ways to communicate these problems – to break them down and re-present them to people in new ways that resonate. We think there’s both an enormous challenge and an enormous opportunity here.”

Doing that will perhaps be the most important thing of all. In the past generation there has been a distinct decline in how far the public trusts their political leaders.

Anger about a lack of genuine representation in how we are governed, coupled with a perceived unfair response to the economic crisis of 2008, has meant traditional politics has haemorrhaged support.

“Politically, there is a growing lack of faith in leadership which is, it seems to me, causing more people to become more vocal about increasing numbers of issues. People are getting noisier and more articulate about the things they care about, and climate change is a huge part of that.”

“People are getting noisier and more articulate about the things they care about, and climate change is a huge part of that.”

How will this affect the movement against climate change?

“I think the move to fight climate change will grow stronger and stronger as more information is shared, and fewer can act as deniers without being called out on it,” says Miller.

The role of Weapons of Reason and others will therefore become more important; to ensure the apathy towards politics does not seep through to political issues and their solutions, because whilst people may be aware of the general points regarding climate change and how to make our world more sustainable, it still needs to be understood more if there is going to be significant changes.

The question is, how does one prevent an erosion of trust in those in charge having a corrosive effect on tackling climate change before it’s too late?

“I think we just have to teach people – to make them care – and by any means we can. A lot of people talk about climate change with their friends at work, or at home with their families, but perhaps they do so without a solid grounding in exactly what the issues are, where they stem from, and where they’re going,” Miller explains.

Can popular culture be used more effectively in making those currently disinterested care, and informing the others who do care but still lack the “solid grounding” to make a difference?

Yes, according to Danny Miller: “Apathy needs combatting with powerful, scalable communications. A great book or a film (such as An Inconvenient Truth) – anything that can really connect with people emotionally and spur them into action.”

Making that connection, either emotionally or otherwise, is critical. The world has, in recent years it would seem, retained in the most part the emphasis on defeating climate change, even if there does appear to be a slight increase of numbers in the sceptic camp, or indeed those who see green policies doing no more than working against their economic interest, regardless of the effects their profit has on the environment.

“The world’s population is growing – it’s middle classes are swelling, and they need energy to sustain nearly every aspect of their lifestyles.”

The emerging economic powers in the world have developed an aspirational and well informed middle class; as a result there is hope that they will come under more pressure from within to allow the benefits of sudden economic growth to be used in a more ecological way.

To do so will undoubtedly take time – China still builds factories to supplement the slowdown of its unprecedented industrial growth and Putin’s Russia will be difficult to be persuaded from the logic that global warming ultimately means the population will have to spend less money on thick woolly hats.

In the West, the rhetoric regarding climate change is often aimed towards its effect on the world’s wildlife.

Our television schedules are stuffed with advertisements appealing for the adoption of wild animals and broadcasters are increasingly making documentaries on either wildlife in general or to raise awareness of a particular species suffering from the impact of man’s actions.

The hope is that that the connection Danny Miller talks of will spread across the world as the global population grows and nations become more interdependent.

If and when that happens, it will be because we as a people will have made big changes to the way we live and how our world works.

A significant part of that is finding ways to sustain our way of life for the long term through sustainable energy.

The traditional and limited energies, such as coal, oil and gas, are not enough to keep us all warm and fed, and it is wrong to believe changing how we warm our homes or run our cars will endanger economic growth and risk instability.

Is it, however, realistic to expect wholesale shifts in how the world sustains itself?

“Absolutely,” according to Danny Miller and the very fact that doing so is so important is what gives him and his colleagues confidence.

“The world’s population is growing – it’s middle classes are swelling, and they need energy to sustain nearly every aspect of their lifestyles. Until suitable alternative energy sources are found oil, coal and gas will be extracted and they will be utilised. What’s realistic is us learning to use these energy sources more efficiently and more responsibly,” Miller says.

The potential for change is undoubtedly there. Making as many people care and subsequently act on their care is the biggest challenge of all, but through Weapons of Reason, Danny Miller is giving us the best possible chance.