Flying your own drone: how far can it go?

YouTube, a GoPro camera and an iPhone are the important elements that have democratised the videography market, so that nobody has to be a professional in order to produce video masterpieces.

To add even more excitement to the filming experience, more and more people are now trying drone filming.

Drones are unmanned aircrafts, or Unmanned Aerial Vehicles (UAVs), which can carry cameras to record nature videos and take pictures.

Evolved from the traditional remote-controlled toy helicopter, the device is used by many videographers to take landscape shots from the sky.

This kind of filmography also means the cameraman is a pilot at the same time. A drone pilot flies the craft with a remote control while observing the footage simultaneously through another screen on a controlling device, or even on their iPhone.

Early drone tech was first used for military purposes a hundred years ago, and is now applied more widely in artistic and commercial forms because of the dramatic overhead images drones can produce, and the increased convenience the smaller-sized drones offer.

According to Jess Ho, a drone enthusiast and photography student at LCC, in China, more than 500 films have used drones in their filming.

Tommy Coulter-Liston, 21, studies Media Practice at London College of Communication, and is the editor of short sci-fi film, The Drone, which will be released in June. 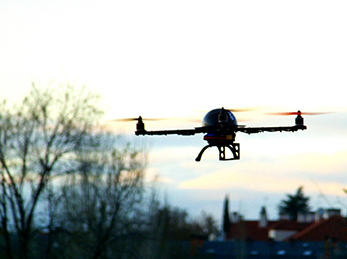 The film is based on the subject of drones and surveillance: “The film tells a story of a character called Leon from the drone’s perspective.” The idea was inspired by the fast-growing number of CCTV cameras in Latvia.”

Coulter-Liston says: “A number of students do include some drone footages in their work, but using drone as a narrative is still not very popular.”

Due to drones’ fairly high complexity, beginners are advised to equip themselves with some basic knowledge of videography, radio control and aerial devices before piloting a real drone. “Only a slight touch of the stick can cause huge difference on the flying direction,” said Ho.

He recommended videographers who are not confident with their skills to start with purchasing toy drones, which are close to the real drones’ design.

They are priced at around £40 and are available in many online stores. The more advanced options are usually priced from £1,000, and you also need to consider the cost for batteries and other accessories.

A drone’s battery weighs around a kilogram and only lasts for 10 to 15 minutes, so each trial can’t last long; pilots need to prepare a lot of batteries, and the energy needed to carry them to the shooting spots.

Having said the aircraft is designed to fly up to as high as 1.5km, there is a legal height limit set by the Civil Aviation Authority (CAA), which monitors air navigation orders in the UK.

By law, an unmanned aircraft fitted with a camera must not fly beyond the pilot’s normal unaided “line of sight”, that is about 500m horizontally and 112m vertically.

It must be at least 50m away from people, vehicles and buildings, and 150m away from congested area. And if you are shooting for commercial films, you need to apply for a permit from the CAA.

Flying drones inappropriately could lead to safety and even minor acts of crime, such as harassment. Despite the increasing number of rules and regulations, the aerial film market continues to grow.

The camera manufacturer GoPro announced it would launch drones in 2015, and in February 2015 Drone maker DJI started enforcing industry standardised formats in their products, which means the new crafts will fit a greater range of cameras and lens types and pilots can freely add their own equipment. With more choices available, drones are bound to become a popular form of filming.

Jess Ho talks about and demonstrates how to work with drones:

By Shaan Sipahimalani
3 Mins read
‘Volocopter’ began trials with passengers on its flying drone taxis in Singapore, which has many questioning the future of the industry, and its jobs.