My Father, The Political Prisoner

My father never liked small, dark places. For a long time, I wondered why he preferred to climb a hundred steps instead of taking the lift of the building of our house in Rome. One day, he told me about the dark place where he spent many months of his life and suddenly everything became clearer.

My father was born in Argentina and came to Italy in 1976, before I was born. In the 1970s, the country was a military dictatorship and my father, an artist and political activist, was jailed for six months, spending his days in a small dark cell in the outskirts of Buenos Aires.

This was the era of the Dirty War against leftist groups of opponents of the regimes who paid horrible consequences. According to human rights organisations around 30,000 people were jailed, tortured and killed during those years. Figures were unclear because people just suddenly disappeared (known as ‘los desaparecidos’) because they were kidnapped by the government and their families didn’t know how to find them. Some were armed rebels but most, like my father, were young intellectuals who understood the importance of freedom of expression and didn’t want to give that up.

The repression didn’t involve only the armed groups of rebels but also involved people, who were considered dangerous because they were expressing opinions or discussing subjects considered subversive – such as psychology, religion and politics. My father was never involved in the armed struggle and he never involved himself with the armed groups against the government such as the ‘The People Revolutionary Army’ (ERP) and the ‘Peronist Montoneros’.

[pullquote=align”right”]My father remembers the period of incarceration as the harshest times in his life.[/pullquote] My father suffered many physical and psychological tortures during his imprisonment because they thought he had information about the groups of insurgents.

It was 5AM when my father, then aged 20, heard the doorbell from his bedroom. My grandfather opened the door and four plain-clothed policemen told him that they wanted to have a word with his son. In the meantime, my grandmother and my aunt woke up and went to the door to see what was happening.  My father was the last one to go down the stairs and he saw all of his terrified family looking at him. When the policemen saw him they took him and they told him that he had to come with them to the central police station.

At that time the Argentinian police were feared for their corruption and violence. He saw from the police car his mother and sister crying desperately and his father shouting at the policemen: “You don’t have any right to take him away! He hasn’t done anything!”[pullquote= align right]At that point even though my father knew that he was innocent he felt as if he was dying inside because the last thing he wanted was to cause such a huge pain to his family.[/pullquote]

During the journey in the car, he stared at his cuffed wrists and wondered what was going to happen to him. Once he arrived at the police station, they showed him photos of people whom they considered dangerous, asking my father if he knew them. Leafing through the pages he recognised familiar faces who, like him, took part in cultural events, but he denied knowing any of them. The police threatened him, beat him up and threw him in a little cell, where he stayed for a a week, sharing the space with an alleged killer. Throughout the week they kept on interrogating him at any time of the day and of the night trying to make him speak.

After those terrible days they took him to court where he spoke to the judge and he told him his story. My father remembers him as a kind person who in contrast to the police showed some humanity. On the same day he was allowed to see his lawyer who told him that he could expect to spend at least two years in prison. After few hours in court the police took him in a van to Villa Devoto prison in Buenos Aires. Through the van’s small barred window he could see the streets that he knew very well and he felt helpless thinking that he was not longer free to stroll in his city. That was the moment when he really realised that his freedom and his rights were taken away.

It was a Friday evening when he first arrived at the prison. One of those evenings in which my father would normally meet with his friends as any 20-year-old guy would do. When the van parked he saw many huge grey buildings and a vast courtyard in the middle. He was surprised by the fact that there was virtually no noise and no-one talking. Before placing him into his cell the guards explained to him all the rules of the prison, one of which was that it was forbidden to speak after nine o’clock at night. But when he sat on his bed and he looked around and he saw many prisoners talking in sign language with each other. [pullquote]He couldn’t sleep that night, due to the terrible smell and the heat in his cell he felt unsafe and scared.[/pullquote]

He soon understood that prison was a completely different world with its own rules and hierarchies– those imposed by the jail administration and those created by the prisoners. The only way to survive was to respect both of them and to be smart enough to get along with the right people. For my father who wasn’t familiar at all with that kind of environment was really hard to make friends at the beginning.

Luckily, a few days after his arrival they took him to a huge cell with many other inmates and things got better. While he was moving cell he spoke with another prisoner who told him to find his friend Tito who was in the cell that my father was destined for. When he entered the cell all of the inmates stoop up and looked at him in a threatening way. He started to say the name of Tito at aloud and when he finally saw my father he told him that he was friends with the guy he met outside the cell. From that moment he was safe because the ex boxer Tito was very well respected in the prison and no one would ever touch my father knowing of their friendship. 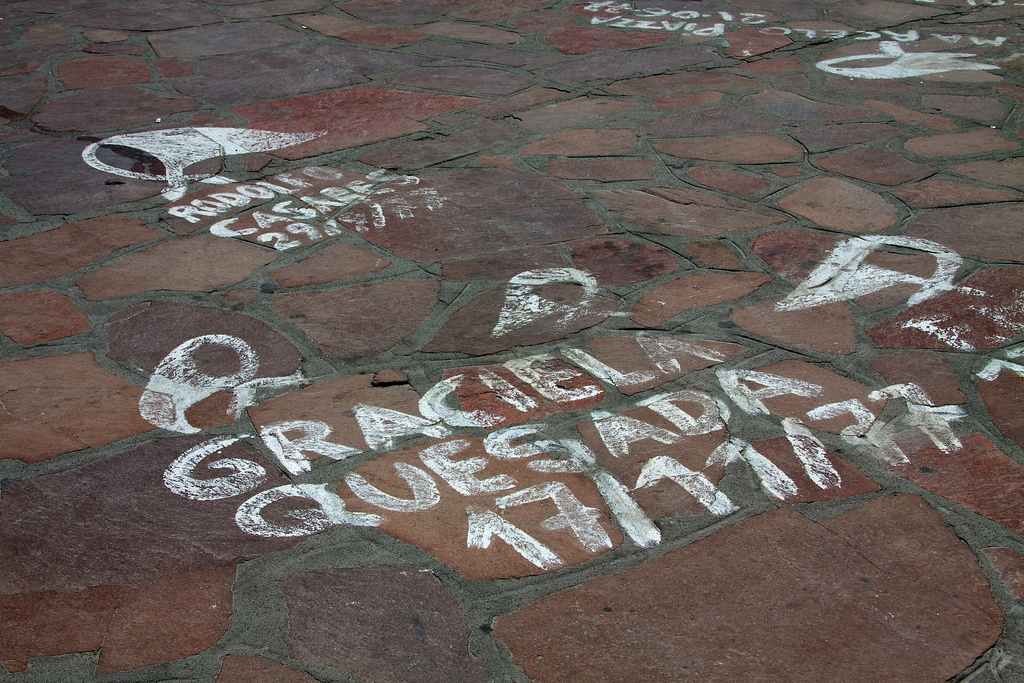 Distinctive ‘white shawl’ protests in which mothers would express their wishes to reunite with their children after the ‘Dirty War’ [Credit: McKay Savage via Flickr]

My father describes the life in prison as very monotonous and depressing but thanks to this experience he understood and appreciated many things in life that he used to take for granted. Losing his freedom, independence and any kind of privacy was a feeling that deeply changed his perspective. He couldn’t stop thinking about what he left outside the barred window of his cell and how lucky he was to have the life he lived.

After six months in jail that felt like years, it was a June evening when he heard someone calling his name. They took him to the director’s office and they told him that he was free. He was incredulous and felt an overwhelming happiness that he never forgot. As a tradition of Villa Devoto every probationer had to leave anything that he owned to the other inmates. When he left the prison it was a cold night and he was only wearing tattered clothing but he didn’t even feel the cold. He felt alive again and nothing else mattered. His family wasn’t aware of his release so he asked for some change to the passers-by and he found a telephone box to call home.

Coming back home was even better then he had imagined but he still had to face many of the consequences of going to prison. [pullquote]His imprisonment had been covered by newspapers which portrayed him as a criminal.[/pullquote]His legal case wasn’t over and he was still waiting for his verdict.

He discovered that the only reason for his release was my grandfather’s persistence in going to see the judge who had always known that my father was not guilty but would not free him for fear of the police. A year later, he was finally declared innocent and he could finally get his passport. At that point leaving Argentina was the only possible option for him. He was really lucky because many of his peers were killed in secret without even being taken to trial. They just disappeared.

Gradually the political situation in Argentina changed. Between 1982 and 1983 the country lost the war against Britain over the Falklands islands. This defeat eroded the support for the military government and contributed to the worsening of the financial crisis that Argentina was already going through. However, the key fact that led to the ultimate decline of the dictatorship was the rise of movements that protested publicly against the disappearance of thousands of Argentinians. This process of democratisation led to the election of president Raúl Alfonsín, who began legal proceedings against the most senior members of the military dictatorship. When the dictatorship collapsed its members destroyed all the documents and evidence of their atrocities. Without these many of the guilty individuals received far smaller penalties than their crimes merited.

But by then my father had already begun his new life in Italy. He left his country unwillingly especially after having been separated from his family for so long. But he always says that at the time he left his roots and his loved ones, he gained something that is priceless: freedom. The freedom to express himself and his art without worrying about paying any penalties for that.  Now after so many years jail is just a distant memory but it remains an experience that deeply influenced him and my family. Personally, I did not realise how much his story affected me until I got older and I understood that listening to other’s people’s stories and helping them to have their voices heard was the path that I wanted to take.

To this day, the tragedy left behind by the ‘dirty wars’ in Argentina continue to make headlines as families are struggling to reunite:

By Sophie Patrick
5 Mins read
An in-depth look at the 117th National Western Stock Show in Denver, Colorado, and at what makes this once-a-year event so special.
AudioLifestyle