Towards the end of last year official looking posters began appearing on bus shelters across London. Apparently produced by the Metropolitan Police they announced: “We caused the 2011 riots by shooting dead an unarmed civilian and then lying about it. And we got away with it.”

Another read, “You’re 28 times more likely to be stopped and searched in London if you don’t have white skin, because we’re still really racist.”

The professionally produced posters, which carefully mimicked the Met’s brand identity were, of course, a hoax but one that stands in a long tradition of what is known in arts circles as ‘detournement’ – turning the expression of the capitalist system and its media culture against itself. It is a concept developed in the 1950s and 1960s by the Letterist International, then later by the Situationist International and has been taken up by successive waves of radical campaigners.

The group behind the spoof police ads was identified as STRIKE! Magazine, an anarchist publication produced from offices in London’s Fleet Street by a group of young designers and journalists, who have chosen to reman anonymous. The magazine specialises in  “politics, philosophy, art, subversion and sedition” and its offices are free to any organisation with a radical stance or desire not to conform with the mainstream and corporate world.

Hijacking corporate advertising has become a familiar tactic of radical campaigners, with notable practitioners including Adbusters, Culture Jammers and Occupy

These organisations and publications create sophisticated and subversive messages that mimic and subvert corporate offerings. Adbusters, a Canadian anti-comsumerist organisation has become famous for its ‘subvertisements’ spoofing ad campaigns. So, golfer Tiger Woods is pictured with a Nike swoosh smile, the stars on the American flag are replaced with 50 corporate logos and a droopy Absolut Vodka bottle is pictured above the slogan ‘Absolut impotence.’ 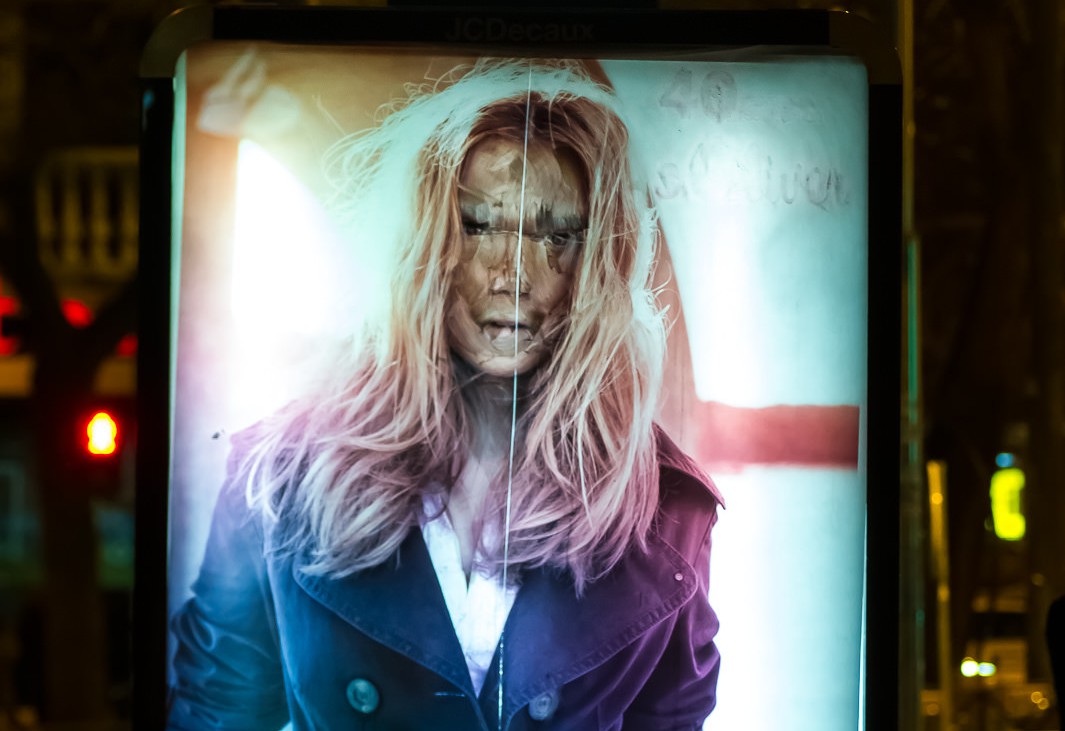 Vermibus, a Berlin artist, has been waging war against advertising since moving from Spain almost four years ago. He uses billboards and adverts as templates for his art, transforming them with heavy brush strokes to create images of death and decay. He represents the growing voice of artists and consumers who hate being told and advised what to buy and how to live their lives. In an interview with Vocativ last year, he said that adverts subvert the notion of beauty. He says: “When society only hears a single voice speaking and grant authority to that voice, terrible things can happen.”

The Spanish born artist argues that we now live in a society where we expect everything for free – free music, free movies, free apps – but with free, someone has to pay. Those who choose to live in a society where everything is expected for free, now must adapt to a lifestyle where adverts and consumer world dictating is the norm.” Vermibus believes we’ve reached the point in history where people have realised that there is too much advertising, but he says, “we focus on the surface of the problem when the solution would be to address the root of it.”

Working under the name ‘Brandalism’, a group of British street artists aims to subvert the consumer messages in advertising.

According to the organisation’s website, the UK’s advertising industry pays out £16.1 billion each year to display a message or advert. This works out as around £250 per person each year spent on sending messages or direct adverts to them.

Brandalism says that advertising is not about catering to existing needs, but creating new desires. Not only desires, but insecurity as well, because we cannot desire without feeling like we lack something. This desire creates new kinds of people. Rather than the advert describing a product, we are now the product the advertiser is making. Advertising makes people feel insecure and unfulfilled when unable to access the products we’re told to desire.

The organisation claims the riots of 2011 in which kids from poor backgrounds smashed their way to the products which they are unable to, were a consequence of advertising.

The rebranding or imaging or global corporations are only one side of the argument though. Individuals or small organizations often spread hate and bigotry through advertising. In 2014, anti-Islam adverts were displayed all over San Francisco’s buses, the controversial ads– which equate Islam with Nazism– were plastered on the sides of Muni buses.

One of the adverts read out: “Islam Jew-hatred: It’s in the Quran. Two-thirds of all US aid goes to Islamic countries. Stop the Hate. End all aid to Islamic countries.” The words are accompanied with a picture of Adolf Hitler with Haj Amin al-Husseini, former Muslim leader in Mandatory Palestine. A clever street art activist in the city transformed the anti-Islam banners into action-packed messages of love.

The artist used images of Kamala Khan, Marvel’s first Muslim character, as well as new tag-lines railing against the messages from the original posters. One of the defaced replies has, “Calling all bigotry. Stop the Hate,” while another reads out, “Stamp out racism. Stop the Hate.”

Similar tactics are used online. The MyDavidCameron website allowed users to create spoof versions of an election poster featuring the prime minister, replacing the original slogan with phrases such as “I love the NHS so much I want to cut it up into little pieces and give it to all my friends” and “Government of the rich, by the rich, for the rich.” The site acted as a high-impact website and social media campaign for social and political issues, and that’s the direction the defacing of advertising seems to be heading.

From an anarchist gesture or artist’s in-joke, the subversion of advertising is developing into a political tool. It would be a strange irony if one day it were to become just another type of advertising.