Though nearly fifty years old, the work of Atelier Populaire feels as vivid and as immediate as today’s news. Its themes still resonate: student occupation, inequality, state repression, generational inequality, and rage against a government and establishment that seemed neither to understand nor care about its people.

The group of anonymous designers, based in an occupied Paris art college, produced hundreds of posters and fliers, in a few weeks in May 1968, when workers, and students united in a series of protests that brought France to the brink of a revolution, Simply printed, mostly in red, blacks, their influence can be clearly seen in political posters for the likes of Occupy and Class War, fliers for raves, fanzines, punk graphics and the work of Banksy and other graffiti artists.

Sera-t-il chomeur? demands one, under the picture of a new-born baby. Will he be unemployed? La radio ment, la presse est toxique: the radio lies, the press is poisonous.

There are posters promoting support for occupied universities and factories, for groups that unite workers, students, immigrants and the unemployed, fliers advertising meetings of people’s assemblies to debate freedom of speech

Others bring bulletins from the struggle: seven demonstrators were wounded at St Lazare, a Citroen factory has been occupied by the workers and bosses, traitors and fifth columnists swept into the street, the military has seized control of a university.

Still others offer political slogans and demands for change: the State is every one of us, frontiers = repression, capitalists need workers but workers don’t need capitalists.

There are fierce denunciations of the police, the military, President Charles de Gaulle and other politicians but above all slogans of solidarity, hope and belief in the possibility of change. Les peuples vaincront: the people will win. Non a la dictature: no to dictatorship. Nous sommes le pouvoir: we are the power. And, over and over again: la lutte continue, la lutte continue: the struggle goes on.

The work of Atelier Populaire documents the history of an extraordinary few weeks in ’68 when strikes and protests seemed set not only to bring down the government of France but also, potentially, to usher in a politics of a very different kind.

It began with a university occupation. A small group of students, artists and political activists seized an administration building at Paris University in Nanterre to protest about class discrimination in French society and to complain about the funding of higher education. The university called the police and the students left but this occupation was the catalyst for a series of protests and demonstrations that spread to other colleges. In the heart of Paris, a demonstration involving students, lecturers and their supporters turned into a pitched battle with the police.

By mid-May, ten million people were on strike across the country.

Further confrontations with the police led to hundreds of arrests and injuries and public sympathy for the protestors grew. Trade unions declared a one-day general strike on May 13 and a million people marched through the centre of Paris. Students occupied the Sorbonne and declared it a ‘people’s university’ and workers began occupying factories across France.

De Gaulle, the French President, went into hiding and fled to Germany while other political figures made plans to leave the country, believing that the government was on the brink of being overthrown by violent revolution.

It was a feature of the protests that they weren’t led by mainstream politicians or trade unions but emerged through a small self-organised groups of students and workers. Atelier Populaire was one of these.

At the start of the upheaval, students and staff had taken over the Ecole des Beaux Arts, an art university in Paris and established the Atelier Populaire (the People’s Workshop) as a base from which they produced hundreds of silkscreen posters and fliers that both drove and documented the protests.

Its members saw their work as a revolutionary tool, declaring in a statement: “The posters produced by the Atelier Populaire are weapons in the service of the struggle and are an inseparable part of it. Their rightful place is in the centres of conflict, that is to say, in the streets and on the walls of the factories.” It was, to use one of their own slogans, art au service du people: art in the service of the people.

The work of Atelier Populaire was, effectively, an alternative to mainstream press and broadcasting organisations controlled by the political establishment. They delivered in intense capsule form their messages of resistance and solidarity, demands for change, short, scathing analyses of France’s political social and economic conditions and news of which factories or universities were being occupied. 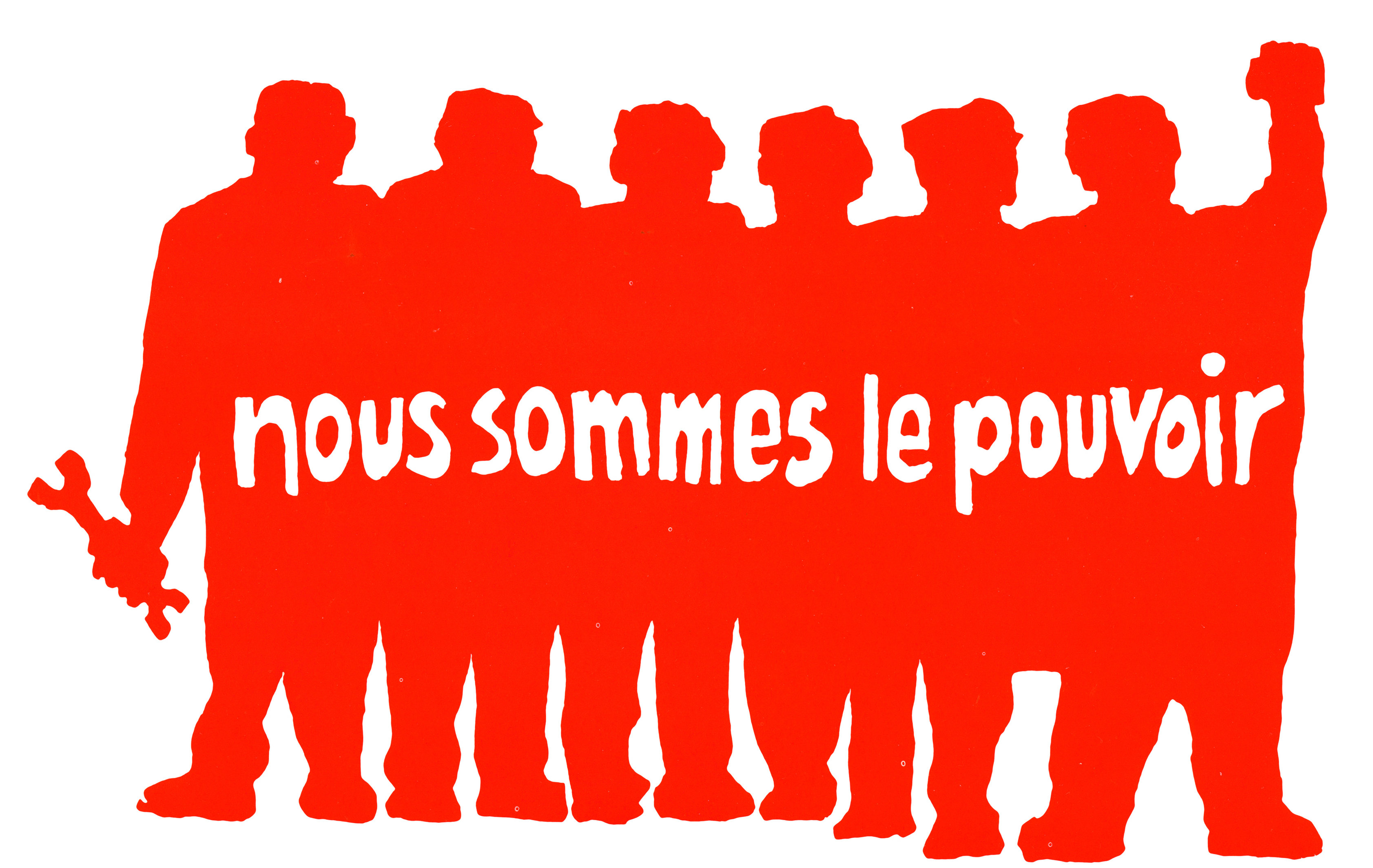 ‘We are the power’ [image provided by Atelier Populaire]

The men and women who produced the posters chose to remain anonymous, to emphasise that their work was the expression of a collective, rather than an individual, voice. Today (contrary to the group’s express wishes) their posters are sought by collectors and grace the walls of galleries but, for Johan Kugelberg, the author of Beauty Is In The Street, a handsomely-produced visual history of the May 1968 Paris uprising, their continuing contemporary significance which can be in movements like Occupy and the Arab Spring.

“The events around Paris ’68 and Atelier Populaire give us a bit of a map for how the 21 Century is going to unfold. May ’68 was a miracle of solidarity beyond class barriers and solidarity beyond a right-wing/left-wing political system. Acts of solidarity cut through the caste system of Western society and solidarity, brotherhood, sisterhood actually germinated across French society between students and workers and the work of Atelier Populaire was a realisation of that.”

Today’s revolutionaries are, perhaps, more likely to use social media to spread their message.

Making a poster is an act that, for Kugelberg, contains much greater social and revolutionary potential than mounting a campaign on Facebook and Twitter. He argues that there is something about the physicality of an artefact and the act of making it that requires people to behave in certain positive ways, drawing parallels with the recent growth in zines – independently produced books and magazines.

“There’s a zine revolution of sorts going on right now. If I hand a zine to you and you accept it, you hold it and you look at it. That act is immensely powerful and that act is as powerful as the act of printing something, waiting for it to dry, walking somewhere with it, putting it on a wall or handing it to somebody.”

Craig Burston, leader of the Graphic Design course at London College of Communication says that Atelier Populaire continues to have relevance as design work: “The contemporary relevance of Atelier Populaire in 2015 is that there are direct parallels between what the graphic designers were doing in ’68 which was putting non-commercial graphic design into a public space. There’s still a need for that. There’s something with what they were doing which has been co-opted by everyone from commercial and underground companies and organisations to people who are promoting all-night raves.”

As a symbol of solidarity, as a tool of political engagement and as graphic design, the posters and fliers produced in an occupied art college all those years ago continue to resonate. La lutte continue!