Rallying is in the blood of Finns, as shown by the success of their drivers in the World Rally Championship down the years.

Since 1977, seven drivers from Finland have gathered 14 WRC titles between them. Not bad for a small nation of just five million people.

Frenchman Sébastian Loeb holds the record for most championships with nine, but next come Finnish drivers Juha Kankkunen and Tommi Mäkinen, both with four. Kankkunen remains the only man to have claimed the WRC crown with three different manufacturers: Peugeot, Lancia and Toyota.

He ended his career in 2002 with 23 WRC wins. That year, compatriot Marcus Gronholm won his second title, but since then no Finn has won the Championship. However, that might not remain the case for long.

A new star is rising on the northern sky. Jari Latvala started his racing career at the age of 17 in 2002 and was quickly recognised as a talented young driver.

[pullquote align=”right”]”On the narrow tracks hidden deep in the woods, a Finn will forget the rules of the road and becames enchanted by the idea of speed and driving skills.”[/pullquote]

Currently driving for Volkswagen, Latvala is the fastest WRC driver at the moment. On May 24 2015, he took his first WRC win of the season in Portugal.

Like Latvala, many of the Finns learn how to drive at a very young age – and many learn rallying skills and techniques.

Around 80 per cent of Finland’s landscape is forest, ice covers the roads for almost six months of the year and the summers can be rainy. Simply put, Finns have no choice but to learn how to control a car in extreme conditions.

Parents often teach their children how to drive by letting them get behind the wheel on the forest roads or on frozen lakes.

This is how the Finnish rally driving culture and the urge to be faster than your neighbour are passed on to the next generation.

A STUBBORN STATE OF MIND

Thus many Finns are fully capable of driving confidently in an tricky environment well before turning 18. So it’s not that surprising why so many Finnish drivers go on to become motorsport stars.

As such a small nation, Finns take great pride in the sports they are good at. While ice hockey is and will probably always be their number one passion, they also adore those countrymen who excel on four wheels.

Most of small villages have their own rally events, and the races like Vammalan Maastoajot (The Vammala Rally) attract thousands of fans and drivers of all ages from all around Finland. 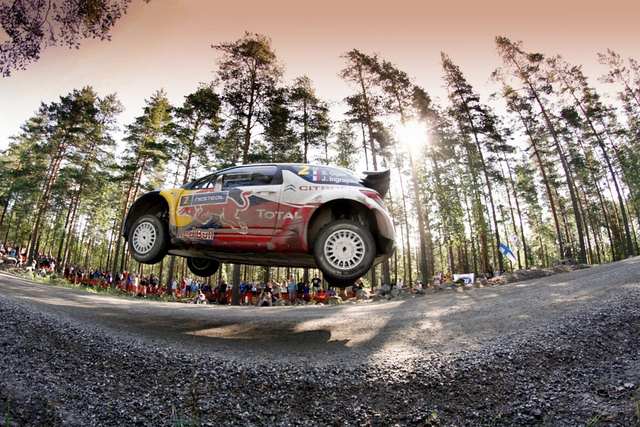 The biggest race of the year is the Rally of Finland, a highlight of the WRC calendar. Since 1951, the race has been held in Jyväskylä, a city situated in the near centre of Finland.

Everyone follows rallying, even if it’s just a passing interest out of the corner of their eye. And on the narrow tracks hidden deep in the woods, a Finn will forget the rules of the road and becames enchanted by the idea of speed and driving skills. It’s all about testing the limits of a man (or woman) and machine.

My grandfather was the biggest rally fan I have ever met. He made sure to watch any race that was aired on TV and on empty roads he would let his old Toyota fly.

If I was able to ask him now, what makes Finns good at driving, he would have probably answer sisu. The word cannot be directly translated in English, but it describes a stubborn state of mind when someone will not give up.

Sisu is the right word to refer almost any Finnish athlete, driver or non-driver. The old man was made of sisu and in his fiery imaginary races he ended up destroying more than a few cars. And his story is not an unique one.

The Finns take an early interest in motorsports and their instinctive hunger for driving is fed by annual rally tours and events, programmes and even rally racing classes. Anyone courageous enough can book a class with a company such as Rally Promotion Finland and get behind a wheel of a race car for a day.