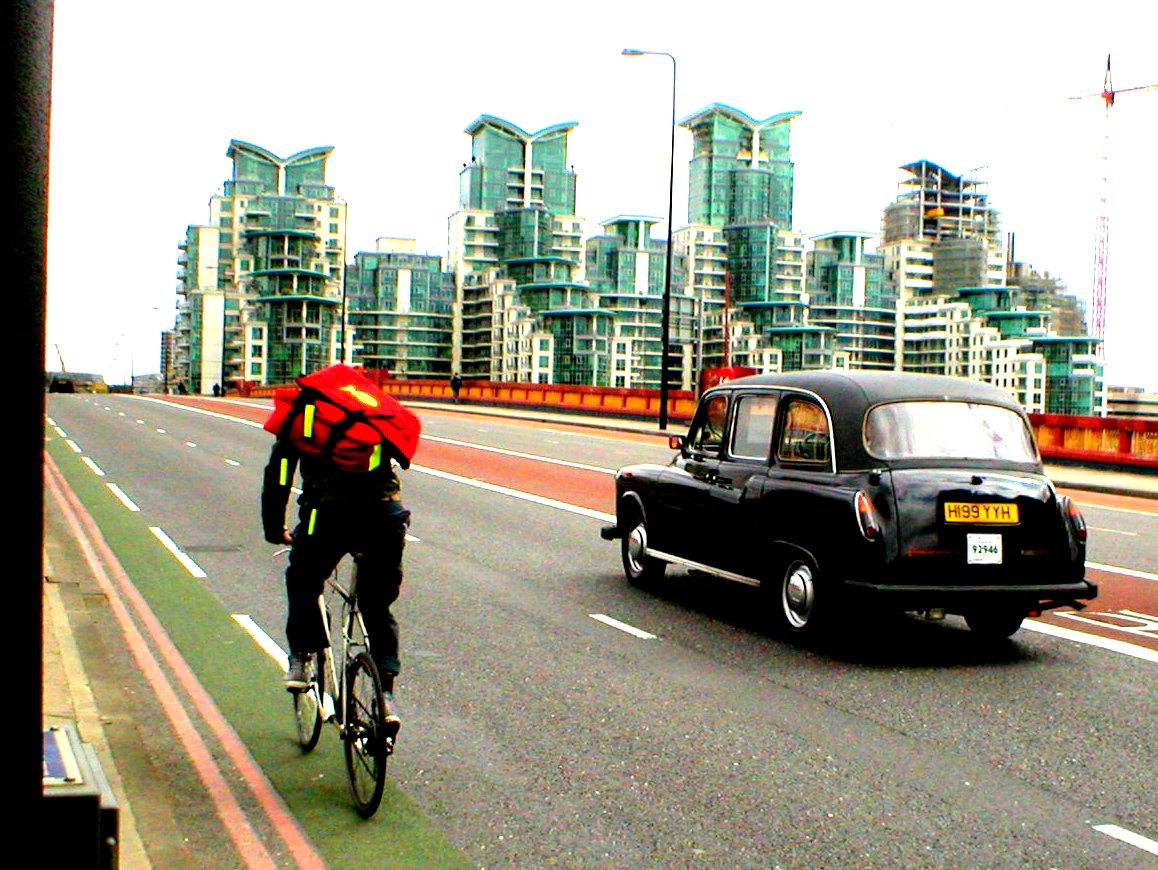 It starts with the Boris Bikers; meandering tourists and Londoners who don’t have or don’t want their own bike; then it blurs into the commuters, the daily make-it-to-work-and-make-it-home cyclists; next come the mile-pushers, the avid fans who can think of nothing better to do than to just ride; and finally, come the couriers, the endorphin-addicted men and women who fly through the streets each and every day making sure business life continues moving forward.

They are the ones whose love of the game has become a profession, who’ve taken cycling to the next level through speed and a vast understanding of the alleyways and byways of London.

When this fashion company needs to delivery shoes to that PR Company, they bring in the courier. When Google wants to deliver a letter to Julian Assange at the Ecuadorian Embassy, enter a courier. When the Queen needs her tea delivered to Buckingham Palace, when someone wants to send a bunch of invites to 10 Downing Street, or when £50,000 in cash needs to be delivered from an office to a bank, you bring in a courier.

The cycle courier has been a part of London’s existence since the invention of the bicycle. In his book, Bicycle: The History, David Herlihy documents the use of couriers as far back as the 1870s.

For the next hundred years, cycle couriers were used to transport everything from documents to checks to pictures and more. Everything that needed to be delivered in a day and could fit in a bag was delivered by the courier. This remained the same up until about the 1970s.

“There are more people on bicycles in London earning a living delivering things.” – Nico Hogg

Now things that were once only able to be transported by bike can now be suddenly sent at the click of a button. Artwork, designs, all of it, now sent online in a matter of seconds.

So what happens to the cycle courier? Is this the beginning of the end?

Well no. Jon Katona has been a courier for five years now and is the secretary for the Couriers and Logistics Branch of the International Workers of Great Britain (IWGB), and he says there’s still plenty of work.

“What remains is the bigger physical items which just can’t be digitalised, like samples of cloths, and shoes, and just different items like gift items that people buy. Some areas of the market diminishing and some others springing up.”

So things may not be dying, but they are definitely changing. Dr Jon Day, author of Cyclogeography and lecturer at King’s College London, was a cycle courier for three years spread out in-between studying from 2006 until 2015: “I think the death of the courier is very much exaggerated, but the decline feels real.

“The story I hear is this: basically, you used to be able to earn the similar amount in cash for a week’s work that you are now, but due to inflation it is worth less. So you could do a £500 week in the eighties which would have been a very good salary back then in a way that it’s not today.”

Nico Hogg, a courier for five years and an avid cyclist for thirteen has a similar message about the issues concerning rates. He says that “in real terms they fall every year”. However, he also speaks with caution about the idea of the decline.

“The idea of a decline is based a lot off of, I think, a nostalgia. I don’t think it’s declined at all in the last seven or eight years in numbers. I think wages have probably flat-lined, but there are more people on bicycles in London earning a living delivering things. Whether they’re, strictly speaking, cycle couriers, I wouldn’t necessarily say so.”

Hogg also mentioned the current ‘uberisation’ of the courier market, with the definition of a courier getting blurred and ‘the edges getting very fussy’ – fewer cyclists are working directly companies and many smaller companies are coming in and attempting to get riders on board.

Another side to the story

CitySprint and eCourier, two of the largest same-day courier companies in London, declined to be interviewed. However, Katona, who is pushing the IWGB’s fight against pay freezes from companies such as CitySprint, talks about what the company narrative is.

“The company tells this story as well, that the industry is changing, that markets are shrinking. They say, ‘well work is slowing down, we can’t afford to give you pay rises.'”

Having said that, in an article published on July 7, 2015, Corporate Watch, an independent research group set up to investigate the impacts of corporations, claimed that CitySprint has been sending millions of pounds through the Channel Islands Stock Exchange ‘tax havens’.

When presented with these figures from Corporate Watch, CitySprint said that they were “fully compliant with UK tax legislation”.

Currently, couriers are labelled as self-employed and therefore not given sick days or injury compensation. Hogg was in the middle of a courier run when a driver didn’t notice him, opened his door, hitting him and causing another car to run into the back of him.

Luckily he wasn’t injured enough to stop working. However, another moment saw him fall and injure his knee, putting a hold on his riding and his work.

Matteo Violino has been a cyclist as long as he can remember, in Italy and in England. He moved to London three years ago and has been working different jobs until, about a month ago, he decided to combine his love and his work. About two weeks after starting work for Rush Courier, he was in an accident that broke his collar bone.

His girlfriend, Heloise Wooster, a student at Central Saint Martins told Artefact: “One of the problems that he faces is that, because he’s not on a contract, he can’t get benefits the way you would when you’re with a company, so he’s without money for a month. There needs to be some sort of protection around it because these guys are putting their lives at risk just to do some deliveries.”

In laying out what does happen when a cyclist gets injured, Katona said: “If we do have a serious accident, the ambulance comes, the package gets taken off us by another courier and the goods are insured but we’re not. [The company] will say we’re not employed by them, we’re self-employed.”

“I think the death of the courier is very much exaggerated, but the decline feels real.” – Jon Day

Fifty years ago being a cycle courier was a simple, straightforward job; anything small enough that needed to be delivered the same day was delivered by a courier.

Now, things are changing, the market is moving, and couriers are trying to figure out their place, but according to Jon Day they’re here to stay.

“Unless we reach a stage in which 3D printing lets you create anything or when we can teleport stuff, yeah I think there’s a need for same day delivery. They’ve just got Amazon Prime Now. So getting stuff that people have bought in this virtual world, the physical stuff, needs to be taken by someone and I think that’s going to give work to all sorts of delivery people.”

Katona has a similar feeling. “I think there’s going to be a revolution at some point where the amount of riders is reduced and there aren’t so many people out of the streets and they’re going to be better taken care of by certain companies.”

He believes there will be cuts, but he acknowledges that the current system cannot continue to exist the way it is now.

So you’ll still occasionally see couriers on the fixed-gear roadster with the two-way radio and the satchel backpack, flying through the streets and cycling between 60 and 80 miles a day.

But the industry is at a tipping point, and what happens next is anyone’s guess.

Note: On the August 17, 2015, the IWGB won the first of many battles to provide better working environments for couriers, getting CitySprint to drop the cost of renting equipment by more than 50 per cent.