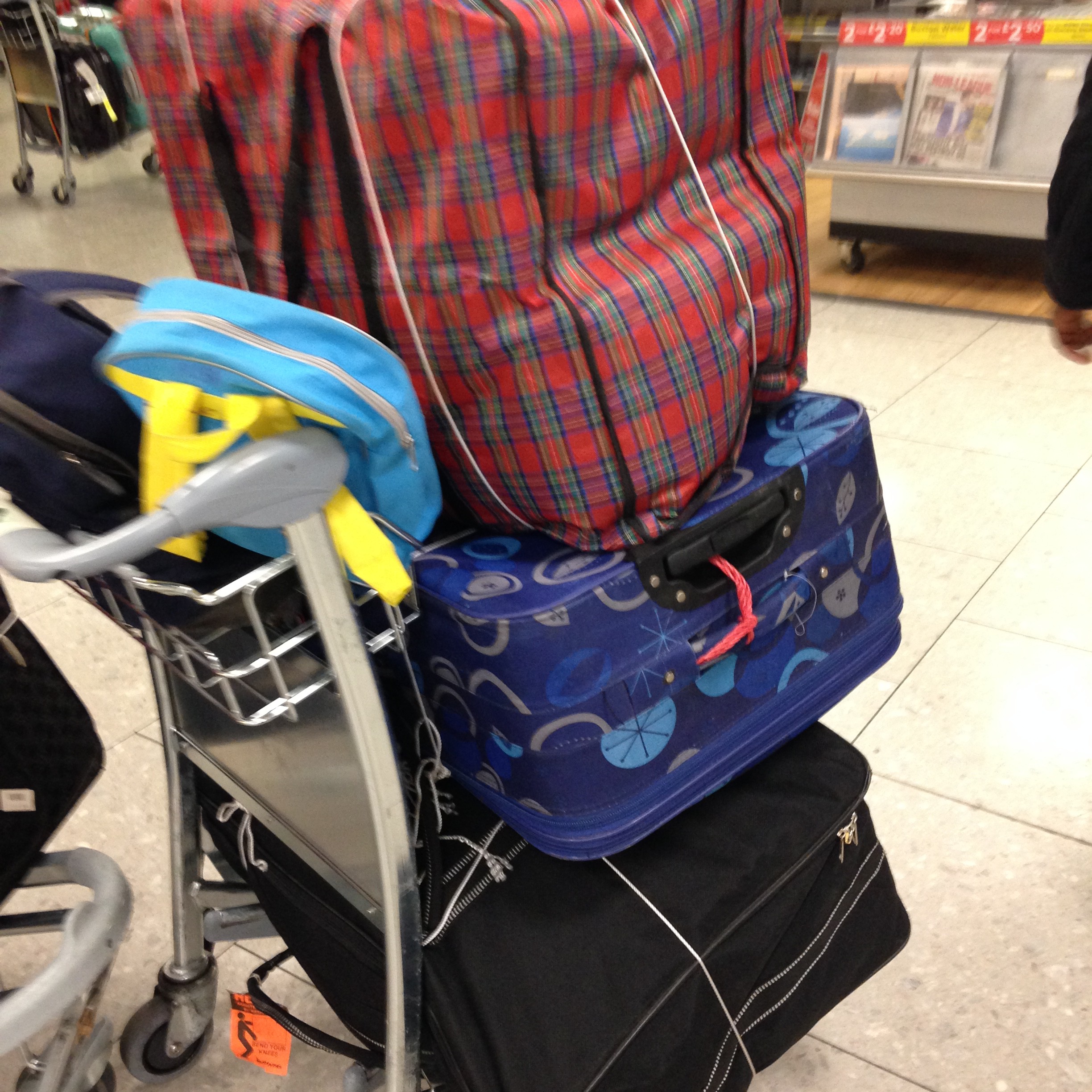 It’s Monday and Heathrow Airport is buzzing with people – some were rushing towards the departure gate while the working staff were welcoming passengers and directing them towards their check-in desk.

As I queued with my sister to help her check in for her flight, something caught my eye, and I turned round to see an African woman with a number of massive suitcases heading towards us. I asked my sister to allow her to move in front of us, and the woman thanked us after she slowly went past with her enormous bags.

We followed her very patiently until one of the staff showed her which desk to go to. She went with a broad smile as if she knew what was about to happen. As she placed the suitcases on the scale, it came up to 120 kilograms for all three. The staff politely told her that her suitcases were too heavy, that she had to reduce each one to 23 kilograms, and then pay for any excess if she was to take all her luggage on the flight.

It was at this point her smile faded to anger and in a rage she retorted: “That is impossible.” However, the flipside is that there has to be a way to stop a non-seasonal traveller from dragging his or her entire wardrobe in as carryon, and the line needs to be drawn somewhere.

Some airlines choose the size of the bag, some go by weight, but as an African who flies regularly, I also know the line needs to be drawn.

She remonstrated with the check-in official:“How do you expect me to leave my bag or reduce some of the contents in it when all I have in there cost me so much money?” Meanwhile, two Airport Security officers had been paying great attention to the drama unfolding before them.

As the discourse between the steward and her grew more intense, the woman who we thought had the broadest smile had now become very abusive to anyone who spoke to her.

It was at this point I garnered the courage to talk to her, and I started by asking her where was she traveling to, to which she replied: “Nigeria.” I asked her if she ever took the time to weigh her luggage before coming to the airport. She said no to my question and I asked her why? “Because I do not see the need to do that”.

Finally she was asked to move her luggage to the corner and allow other passengers to check-in. She did as she was told with anger and aggression.

I was shocked to see this woman with such a broad smile become so rude to another individual. She moved her suitcases to the corner and stood next to them as she contemplated what to do next, with her head bowed as if the weight of the bags were pulling her down.

Even as my sister finished at the check in desk, the woman was standing next to her suitcases with no solution to her travelling chaos. The anger on her face made her look twice her age. I felt bad and tried to think of a way to help her.

I started by checking the British Airways’ website about excess luggage policies but the site indicates that “you can take up to a total of ten checked bags per person, excluding infants (children under two years). This total includes any free allowance you may have.

So, for example, if your flight includes one free checked bag, you can pay to take up to nine additional bags” I also emailed Mcphillips Travel agency to get an expert opinion on luggage issues at the airport since they are also in charge of selling air tickets to Africans on behalf of British Airways. In my email I asked them if they always make time to advice passengers about excess luggage.

“We recognise how important luggage is for our customers travelling to Africa and have always made it clear to our airline partners that a generous free baggage allowance is imperative for passengers travelling on the route. Excess baggage fees do vary from airline to airline and we always recommend people research first how much additional luggage will cost to bring and perhaps look at cheaper ways of getting the extra items to their destination.

“In some cases shipping may make more sense. It should also be remembered that at busy times of year, the airline may not be able to accept excess baggage due to flights being full and limited baggage space in the aeroplane’s luggage hold, so it is best to try to stick within the free allowance during these times to save both money and inconvenience at the airport.”

I tried to explain to the woman that her only choice is to pay and travel to her destination or leave her luggage at the airport for someone to come and collect on her behalf, though I could see for myself that she was not really considering any of my suggestions. By this time, my sister had gone through to the departure lounge and I was left with nothing to do but to head home, wondering what the woman would do with her suitcases.

I can understand why some Africans would think they are having purchase their flight ticket, however, it becomes a difficulty when you see them carrying two pieces more than 23kg each, it becomes a safety issue. I have seen African seasonal passengers get their heads cracked because some didn’t want to check their luggage, break overhead bins and even try to check 40″ TVs as “Personal Items”.

It is important to note that I am aware airline tickets are too exorbitant, but a lot of their prices exist as a deterrent to some seasonal passengers whose irresponsibility would cause safety or security risks to the flight and crews.

However, it is perceived that a good number of Africans are seasonal travellers; this could potentially be a major reason why they tend to travel with excess baggage. They will begin writing a packing check-list as long as their arm, while the seasoned traveller will be emptying out their suitcase until they walk out the door.

The seasoned traveller knows whatever they have left behind can merely be bought once at the destination, and has probably learned to do without said items anyway.

Packing light, checking-in online, taking your valuables in your check-in baggage, all the (not so) uncommon travelling tips does come naturally to those who travel according to seasons and have done it enough for it to become second nature.

Seasonal travelling comes at a price, because there is an earnest expectation from relatives back home that their relative living in UK for example will bring gifts. Passenger flights to African countries have strict weight limits. This includes fuel weight, passenger weight, and cargo (passenger bags).

Instead of asking every passenger to step on a scale (which would cause even more complaining), they use an average male and average female weights. This weight includes a fixed weight for carry on. Depending on the airline, the number changes, but let’s says its 20 Kilograms. If every passenger on a 200 person flight is 5 kilograms over, it’s 1000 kilograms heavier than calculated. That’s a lot.

The charge is simply an incentive to follow the ticket agreement, because the airline told you how much you were allowed to bring, and you.