Counter-terrorism: Universities in the front line

As part of the government’s “one nation strategy” against terrorism and extremism, universities in the UK are now required to have “due regard to the need to prevent individuals from being drawn into terrorism”.

It follows the passing of a new statutory body introduced by Section 26 of the Counter-Terrorism and Security Act 2015, which means all higher education institutions will be legally bound to work with the government’s Prevent agenda, which has been in force since September.

The Prevent duty guidance requires these institutions to have risk assessments for guest speakers and “ensure those espousing extremist views do not go unchallenged.”

The guidance also demands that universities must ensure that they have appropriate staff training, IT policies, and student welfare programmes to be able to recognise and respond to the signs of radicalisation.

A recent Downing Street statement has accused four universities – The School of Oriental and Asian Studies (SOAS, part of the University of London), Queen Mary University, King’s College London and Kingston University as hosting the most events with extremist speakers.

Recent press coverage with inflammatory headlines reported how students were allegedly being radicalised during their time in UK universities.

The Daily Telegraph has described those institutions as “havens for Islamist fanatics”, while The Daily Mail depicted the University of Westminter – where ‘Jihadi John’ was a former student – as “a hotbed of radicalism”.

Section 43 of the Education (No2) Act 1986 places a duty on universities in England and Wales to “…ensure that freedom of speech within the law is secured for members, students and employees of the establishment and for visiting speakers.”

Universities will face a fundamental challenge at ensuring freedom of speech when faced with the new Prevent duty requirements.

Nicola Dandrige, chief executive at Universities UK, said institutions already have procedures in place to assess the risk of having extremist speakers whose views might lead to student radicalisation.

Times Higher Education (THE) recently revealed that the section about ‘hate preachers’ in the statement released by the new government’s Extremism Analysis Unit (EAU) is likely to be taken from a report by Student Rights, part of the think tank The Henri Jackson Society.

THE reporter Jack Grove reported that the think tank “has been condemned by several students’ unions for ‘targeting Muslim students'”.

The National Union of Students (NUS) rejected calls to back up the government’s prevent duty legislation, despite Universities minister Jo Johnson’s letter urging students to engage with the counter-radicalisation programme.

Shelly Asquith, NUS Vice-President and a former UAL student, sent an open letter urging students and students’ unions not to work with the Prevent strategy, deeming it a “reactionary and racist agenda” which universities and college staff must oppose.

“This policy is especially one-sided as to only monitor Muslims and black students who might not have the same opinion as their white classmates.”

The NUS is also calling for a boycott of the government’s counter-terrorism strategy and has started a national campaign to oppose the Prevent requirements.

The Students not Suspects tour started this month in London and will also tour in Birmingham, Manchester, Glasgow, and Swansea; it’s also backed by the Universities and College Union (UCU), which represents lecturers and academics.

The first meeting was held at the Guy’s Campus in King’s College London and co-organised by the NUS, the Black Students’ Campaign, Defend the Right to Protest, and the Federation of Students Islamic Societies (FOSIS).

The event included a panel of guest speakers including Moazzam Begg, director of the advocacy group CAGE and a former Guantanamo Bay detainee.

CAGE has been accused of being apologists for Isis terrorist Mohammed Emwazi, who has been dubbed “Jihadi John” by some newspapers.

NUS President Megan Dunn claimed in a statement she “would not work with CAGE”, after the Prime Minister condemned the NUS for “allying” with the pressure group.

In a speech in Birmingham in July, David Cameron said the NUS had “shamed” itself for “choosing to ally yourselves with an organisation like CAGE, which called ‘Jihadi John’ a ‘beautiful young man’ and told people to support the jihad in Iraq and Afghanistan”.

Student leaders and NUS officials expressed concerns about Dunn’s statement vowing not to be working with CAGE, as it could lead vulnerable students not being able to trust Prevent officers and college staff. 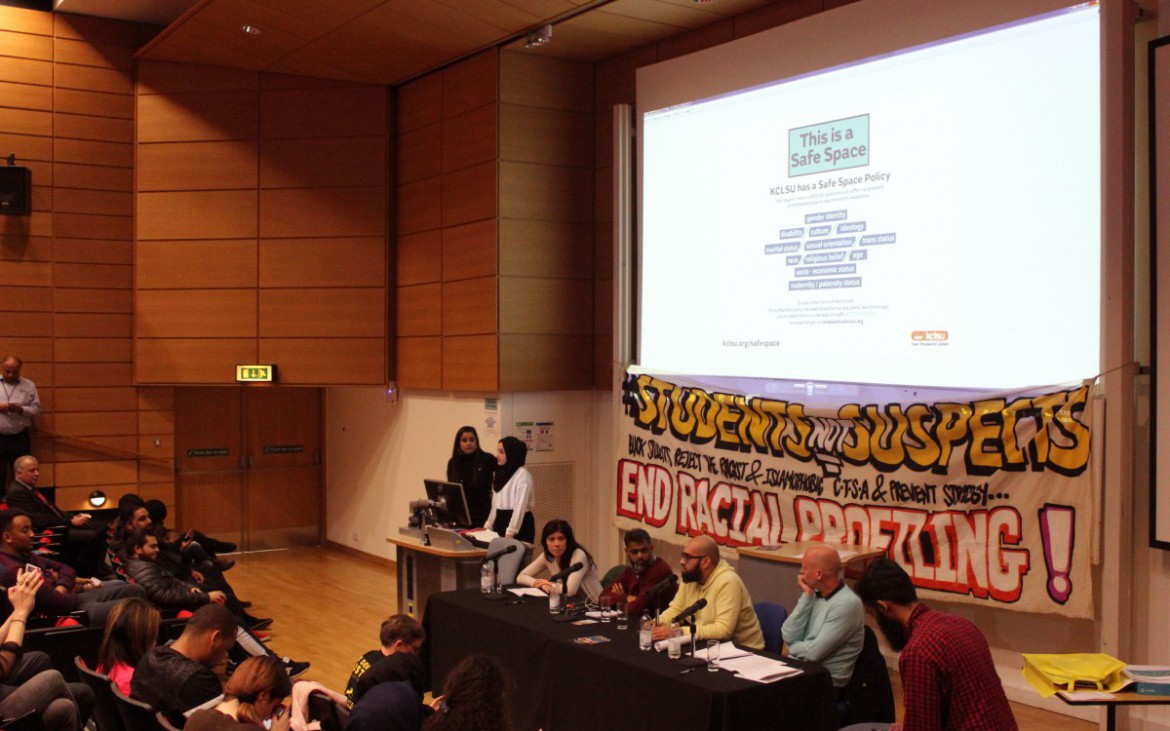 Despite those statements, the first Students not Suspects event in London featured Moazzam Begg from CAGE, who gave a talk on tackling the government’s backlash against the Muslim community.

The speakers mainly raised concerns about the racial profiling and stigma around Muslims that the Prevent duty will enforce within universities.

King’s College academic Jim Wolfreys described the government’s notion of extremism – an opposition to British values – as flawed and subjective to people’s political views and opinions.

“There is also a lot of ambiguity around the notion of extremism just more widely in public debate.”

He points out to the recent portrayal of the Labour leader Jeremy Corbyn as the figure of radical left extremism, after his position on the UK’s Trident nuclear defence system and his defiance of the Queen for not singing the national anthem.

“The aspect that the government has drawn on is really based on the clash of civilisation’s view of international politics,” Wolfreys said.

The event also featured a counter-terrorism postgraduate student who was alleged to be under investigation by Staffordshire University after an official found him reading a book on terrorism in the library.

Mohammed Umar Farooq told Artefact why he decided to leave the course after being accused of terrorism.

The 33-year-old student said: “I was [then] questioned about my beliefs with regards to terrorism and how I think terrorism isn’t the word in terms of what my beliefs are with groups such as Al-Qaeda and ISIS and what I think about homosexuality which I found really strange.”

He later found out that the lady who questioned him was the university’s complaints manager, whom he thinks “knew nothing about the Middle East”.

“That’s when I realised there was something very sinister about this whole case,” Farooq said.

Staffordshire University has issued a letter of apology for its conduct towards Farooq, yet the postgraduate student has reservations about his academic future there.

“I feel so betrayed in the sense where I studied at a postgraduate level and dedicated my own time and my own wealth in this field and I was suspected of the one thing I was working to eradicate.”

Another prominent racial profiling case raised at the event was that of former student Dr Rizwaan Sabir, who was held for seven days while researching terrorist tactics at the University of Nottingham in 2008.

Sabir was accused of downloading an Al-Qaeda training manual but was later released without charge, and it later emerged that the police fabricated key elements of the case against him.

This week’s plan to give £5m of funding to advocacy groups and charities ready to support the government in tackling extremism is likely to be criticised by Muslim civil organisations in the UK.

Among other measures announced are Extremism Disruption Orders, which can restrict the online activities of individuals named extremists.

A spokesperson for UAL said: “Like all universities, UAL must comply with its legal duties. We have invited the Students’ Union to meet with us and discuss our obligations in this area and ensure we respond in line with our values of social justice and equality of opportunity.”

Photographs and videos by Sara Gharsalli.