In conversation with | Anthony Anaxagorou 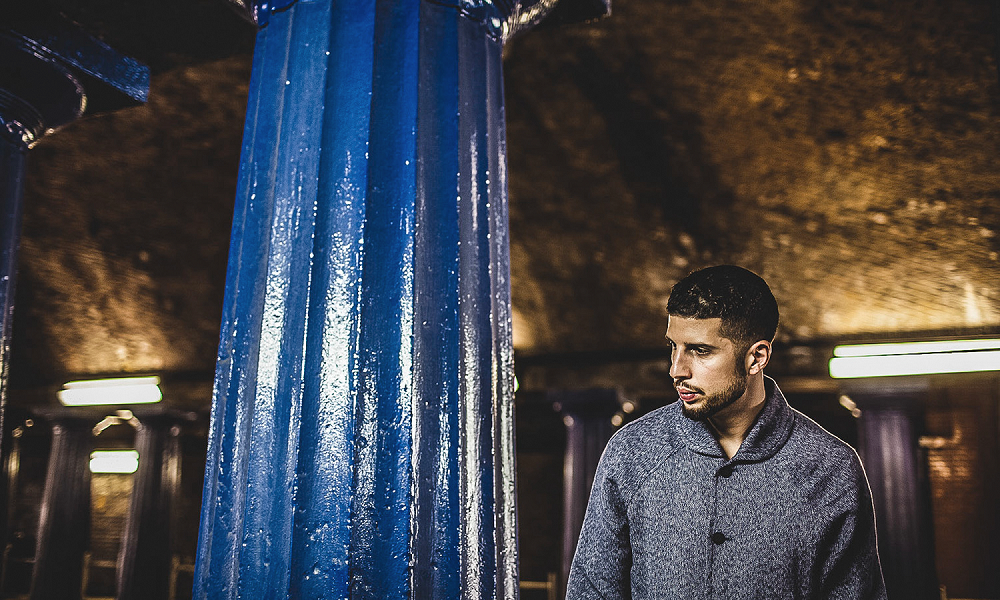 It’s a traditional London afternoon, the clouds are undecided on pouring with rain, and I’m sitting at a circular table next to the railing of the indoor balcony on the fourth storey of the Southbank Centre. The view of the river through the big glass wall is brilliant.

Sitting across and slightly to the right of me is Anthony Anaxagorou, a key player in the current spoken word scene in London.

Spoken word is a form of poetry. It’s as much about the performance and presentation on stage as it is about what’s written down.

It’s not, I’m informed by another poet called Joelle Taylor – who also happens to have mentored Anthony through the years – new. In fact, spoken word has been around since words could, well, be spoken. Now it’s just “rebranded”.

“I’m upset, one day you’re going to be upset too. It’s how we communicate this anguish.”

It’s also gaining in popularity and has been for the last few years; the spoken word ‘scene’ that’s been growing in London is constantly changing, taking influence from punk, hip-hop, grime, and all sorts of other music.

It uses a lot of the traditional poetic schemes, with rhyming words at the end of each line; but it also uses internal rhymes as well, alliteration, word play, and a whole host of other literary techniques.

Since the age of 14, Anthony Anaxagorou has been writing poetry. I woke up today and to God I pray was the first line of the first poem Anthony wrote, or at least remembers writing. That was around 1991 and it wasn’t until about 17 years later when he actually started to make a living out of it.

“I didn’t even know I was writing poetry to be honest. I had an idea of what poetry was in my head and what I was doing was not poetry. It was more a stream of consciousness, that’s how I used to see it,” he says. 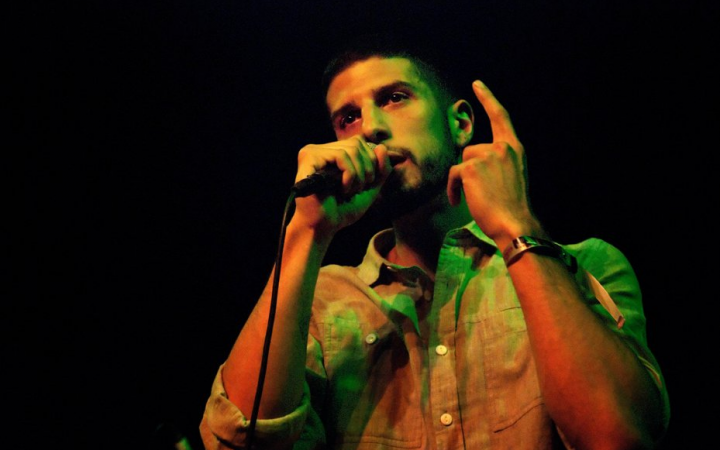 Spoken word is as much about the performance as the words of the poem [Anthony Anaxagorou, CC]

One day his parents told him that it was poetry that he was writing. “Nah, mum, this is rap!” was the overly confident reply that came from the young man.

In the circles that Anthony was a part of, you were either a rapper or a garage MC or a DJ. Poetry was Shakespeare and, Anthony tells me, what he was writing definitely wasn’t Shakespeare.

Anthony, who is now 31, got his taste for spoken word and performance poetry at the age of 17, when he entered, and won, the London Mayor’s Poetry Slam.

In a slam, poets are allowed three to five minutes to present their work and are then judged on that piece, usually by the audience. Some slams have a series of rounds, some allow for multiple poems to be performed.

This was Anthony’s first slam and it wouldn’t be his last. However, certain issues arose and certain events and conflicts kept him from focusing completely on his poetry till about five years or so later when he published his first book, Cards Not Accepted.

“To make a living out of [writing and performing poetry], that came after five years of doing really shit jobs, and then just waiting, slowly, slowly. The more I was writing memoirs and poems, performing the poems, I was gaining traction.”

In 2008, Anthony was working in a media company, making ringtones that used to go into old phones, when he was made redundant. It was at this point where he asked himself what he really wanted to do with his life.

“I was working in a new media company chopping ringtones up. It was a time when one used to buy polyphonic ringtones. And these guys used to get the music rights and then sell them as ringtones.

“So I was running these MP3s through software, it was a crap job. And then when they made me redundant. It got to a point where I was like, ‘alright, what do you want to do with your life?’ Everyone was settled in their career jobs.”

When Anthony talks about poetry it’s clear that he’s thinking deeply about this. He’s a published poet, a writer of short stories and essays, and a playwright for The Bush Theatre in Shepherd’s Bush.

He’s also collaborated with music artists and had one of his poems choreographed and performed by Cirque du Soleil; with a CV like this I thought I might ask him how he would define who he is and what he does.

“I guess I’m a human being who is responding to the world in a way that makes sense for me. The intellectualisation of ideas, that’s kind of how I see it.

“Be it through theatre, be it through short story fiction, or be it through poetry or performance, you can’t really quantify how and when ideas happen and how they turn out. You need to find the right vehicle to convey a particular message or idea.” 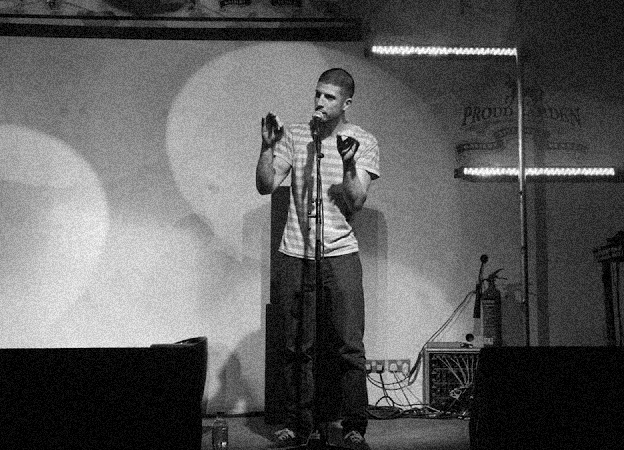 Anthony says that he doesn’t choose the topics either, that whatever you write about is “just part of your disposition.”

Within this Anthony recognises a certain hierarchy in poetry topics; certain focuses will resonate with certain people more than others.

The white middle-classes, for example, most likely won’t “really want to be hearing apoplectic poems about white supremacy, structural racism, colonialism, and genocide. That’s not their cup of tea because of the fact that there is an indirect reference to their privilege.”

But when you’re in a poetry reading or at an event where the majority of the people attending are people of colour, “they will want to hear that and it will resonate and there will be that connection. It all depends on the reader.”

Anthony’s latest book, The Blink that Killed the Eye, is a collection of short stories which explores the prejudices that many of us have to the blue-collar worker.

He chose the name because so often, when a man or women puts on the high-vis jacket, they become invisible as human beings.

“[Working] as a security guard, as a pizza delivery driver, and as a labourer working in warehouses, you a great sense of invisibility. You’re getting paid minimum wage, you’re working with people who don’t really give a shit about how you are, there’s no real etiquette or decorum.

“I found it very interesting in the sense that the moment you put on a high-vis jacket you’re no longer John, Jim, William, Ahmed; you are now high-vis security man. The Blink that Killed the Eye is about what we lose through our own prejudice.”

Anthony also has a book out called Out-Spoken 2015: An Anthology of Poetry. Out-Spoken is a monthly spoken word event set up by Anthony that takes place at The Forge in Camden; it’s also as an independent publisher of poetry and an organisation that runs poetry masterclasses.

Out-Spoken 2015: An Anthology of Poetry is a compilation of famous poems and poets that have performed at Out-Spoken.

Always working, Anthony is now developing a collection of unpublished poems as well as a collection of the best poems that he’s writing from his comeback in 2008 up to the present.

As our discussion draws to close there on the fourth storey of the Southbank Centre, I have to ask him if he has any advice for up and coming poets, and those who want to see if they have what it takes.

“You have to perform your poems. Whether you like it or not you have to go and read them. You have to share and you have to be able to accept that this is the beginning stage.

“Poetry is a craft. I’m still learning. You’re only as good as your last piece of work. As long as you’ve got your marbles and you’re there mentally, you can write and perform poetry.”

It’s clear talking to him now – after the recorder is switched off and I’ve thanked him for his time – that he was never going to be anything other than an influencer.But, he also warns, “the thing with art is you’re not the one who decides whether you’re gonna make a career out of it. It’s the public, the people that support you and the people that give you work.”

When he talked about his life growing up he mentioned that it was a place of “little validation” and “a lot of disheartenment”. Aside from his family, nobody saw much in him and not much was expected from his life.

The conversation moves effortlessly away from poetry to politics and I immediately understand why Anthony has been a part of different panels on racism, identity, and a number of other issues, as well as a mentor to up and coming poets.

It’s easy to tell that this man lives the words that he writes in his poems.

Taking control of our narrative