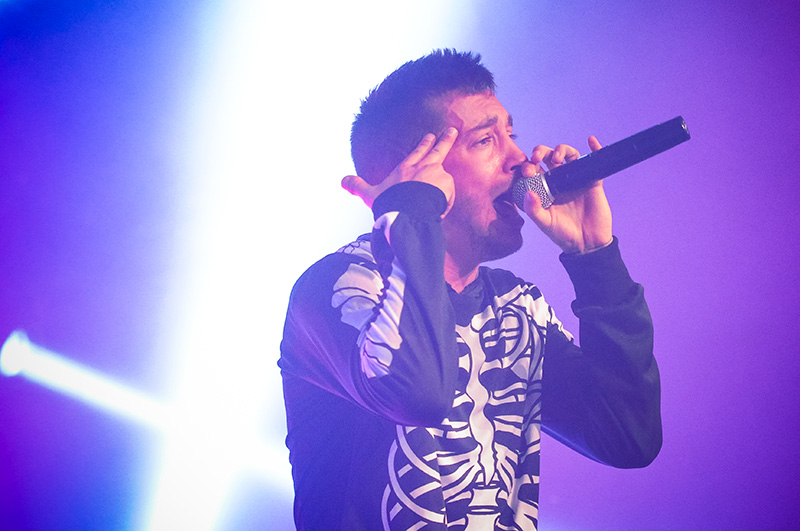 Arriving late, we found ourselves at the very back of the crowd, miles away from the stage. After years of anticipation, I wasn’t about to witness American duo Twenty One Pilots perform (at best) through the screen of some kid’s iPhone.

So as any devout fan would do, I carelessly pushed through to the middle front, pissing off at least 30 people.

The rock n’ rap EDM band kicked off with Heavydirtysoul, the electronic rhythm combined with piano chords and Josh Dun’s heavy drum beats pumped through the veins of the crowd and it wasn’t long until we found ourselves in the familiar territory of a mosh pit.

I was 16 again being pushed in sharp waves following singer Tyler Joseph wherever he went.

Twenty One Pilots continued to thwack out one hit after the other such as Polarize, Holding on to You, Car Radio, and Tear in My Heart, using songs from both their albums Blurryface released in 2015 and 2013’s Vessel.

Throughout the set, there was not a single person in the audience who wasn’t singing and rapping to every song. I have never been to a gig where the crowd felt so united it was almost cult-like.

Twenty One Pilots, like many groups today, are not a band you can easily pigeon-hole into one genre of music. It could be said that it isn’t their style of music which appeals to such a wide demographic of people worldwide, but their lyrics.

Speaking to a group after the gig I asked what it is which they most identify with about the band. One girl said “Everything. But it has to be their lyrics – they always have so much meaning to them.”

Another 14-year-old girl then added: “They speak out to a lot of young people at the moment and address many of the problems they are facing today.”

I couldn’t argue with them there, a lot of their songs reflect the stress and anxiety of modern day life. Stressed Out, for example, probably particularly speaks out to a lot of young people with the lyrics ‘Wish we could turn back time, to the good ol’ days when our momma sang us to sleep but now we’re stressed out’.

It speaks about what runs through a lot of people’s minds today when they’re drowning in work, wishing they could be a kid again with no responsibility.

Thank you Twenty One Pilots for giving us the show of a lifetime – if you didn’t manage get tickets this time round, they’re playing again in 2016 which is sure to sell out soon so act fast.