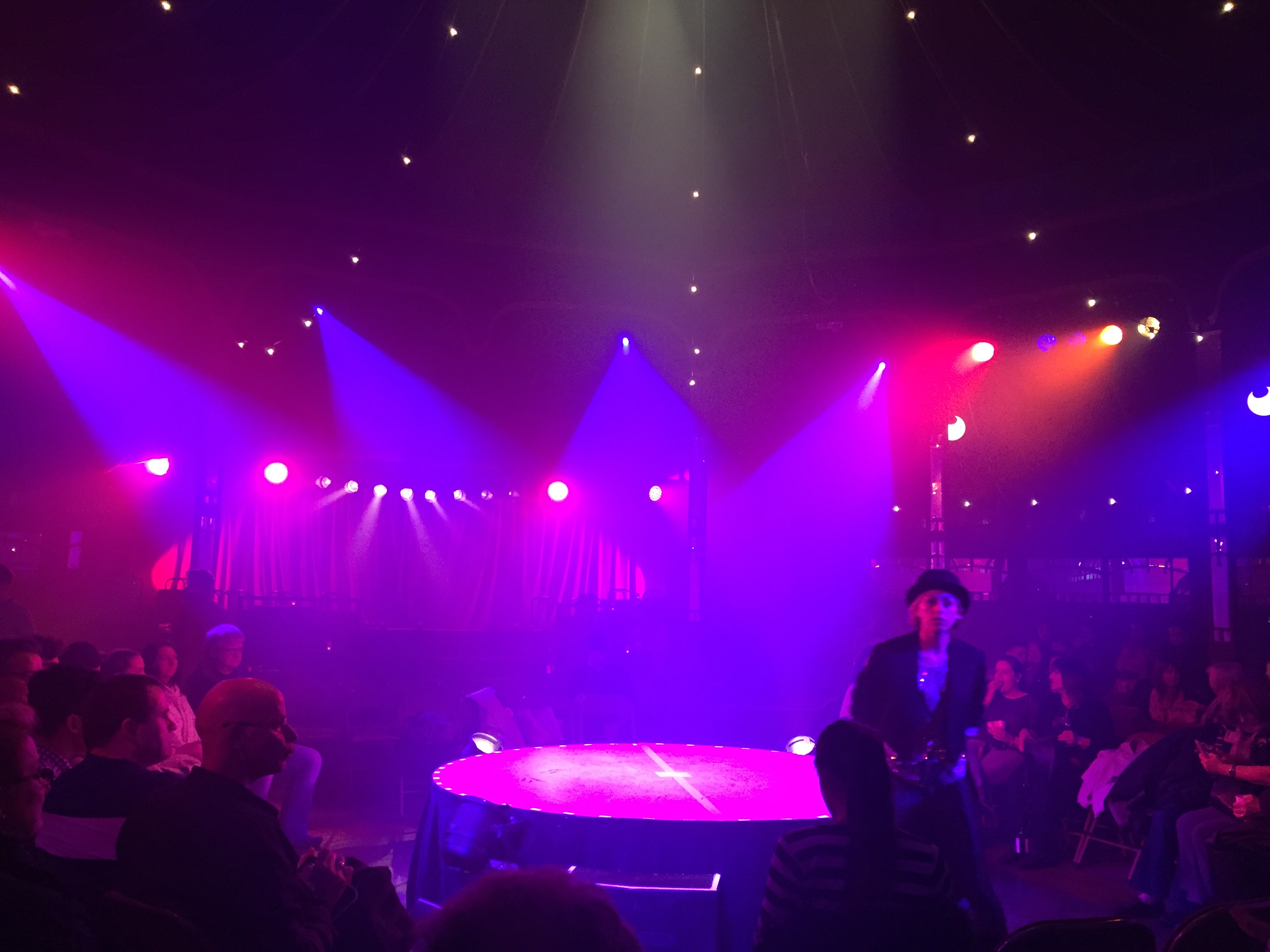 The travelling circus is back in town!

La Soirée’s Spiegeltent is back to entertain us with amazing talent and a night exposed to the world of circus, cabaret, and burlesque.

If you are up for a sexy, good night out, this is where you need to be.

La Soirée is once again a part of this year’s Southbank Winter Festival.

Just five minutes from the London Eye, as you walk along the river, it is hard to ignore the big sign and the lights in front of the Spiegeltent. 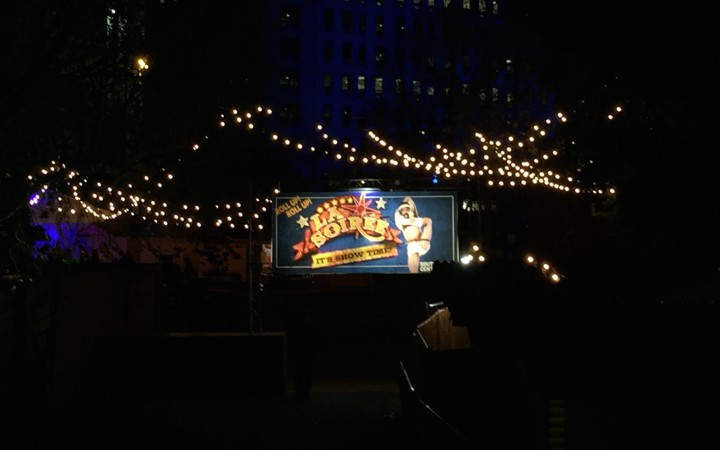 The Spiegeltent is hard to miss [Tania Beck]

As I walked towards the venue, I could smell food and alcohol; there were people outside chatting and having a drink by the food stalls, but I had no idea what to expect and I went inside to pick up my tickets.

Seating is mainly unreserved but there are some reserved booths and ‘posh seats’ at a higher price. Instead of a ticket, I got a wristband.

I arrived fifteen minutes before the performance started and was greeted with smiles and shimmer!

There were already quite a lot of people seated and I was approached by the friendly front of house staff who later led me to my seat. 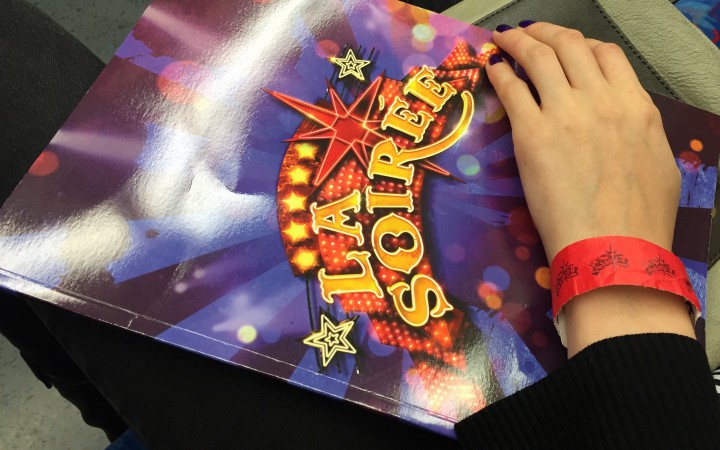 Miss Frisky started off the show with her vocal pipes and extravagant dress and jewellery.

Then it was up to The English Gents, Denis Lock, and Hamish McCann to wow the audience with their strength and sex appeal.

It started off very tame and towards the end of their first act, all of a sudden, they were just in their patriotic boxers and their bowler hats; their acrobatic skill, strength, and balance could be seen in their well-built bodies.

The evening was filled with many impressive acts, some of which involved audience members. There was a whole act by Mooky that involved a man from the audience. 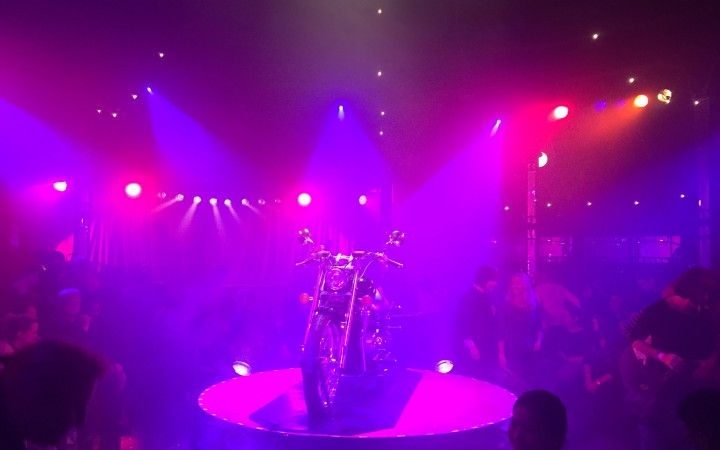 A motorbike, just the thing for some hand-balancing [Tania Beck]

There was also an act with Mario the Queen of the Circus that involved a woman from the audience and giant hula-hoop.

‘Sexual gentleman’, Asher Treleavan, entertained the audience with his Sexy Diablo for Ladies performance and made us all cry out of laughter with his live reading of Mills and Boon.

There were other fantastic performers that evening that left the audience in awe. The last act of the first half involved a motorbike and Melanie Chy with her revival of the ancient art of hand balancing.

Towards the end of the show, I could hear people around me saying that they did not want the show to end. There was always constant laughter and gasps of amusement.

After the show, I managed to interview a few people and asked them what they thought of the evening. 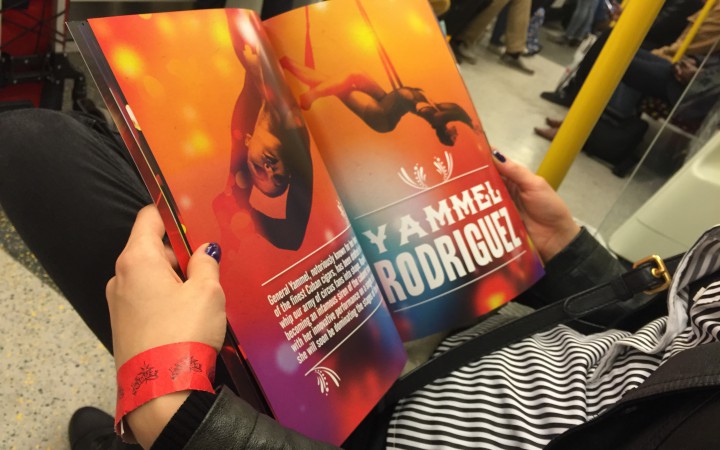 Don’t forget to pick up a programme [Tania Beck]

Claire and Martha both loved the show and said “Literally amazing! It makes me realise how weak I am. I would recommend it to everyone. It was easy to watch and if you don’t like live music or live anything, you will still like that.”

There were also some Malaysian people currently working in London who went to see the show. Samantha told me that she thought it was “fantabulous! It was really good and I enjoyed every single moment of it.”

Another audience member, Aleksandra told me that she wanted to “go back and see it over and over again and that it was absolutely amazing!”

So there you have it, there’s been nothing but good reviews and if you’re up for a good night out, La Soirée should definitely be on the list!

They will be in London until 17th January next year!