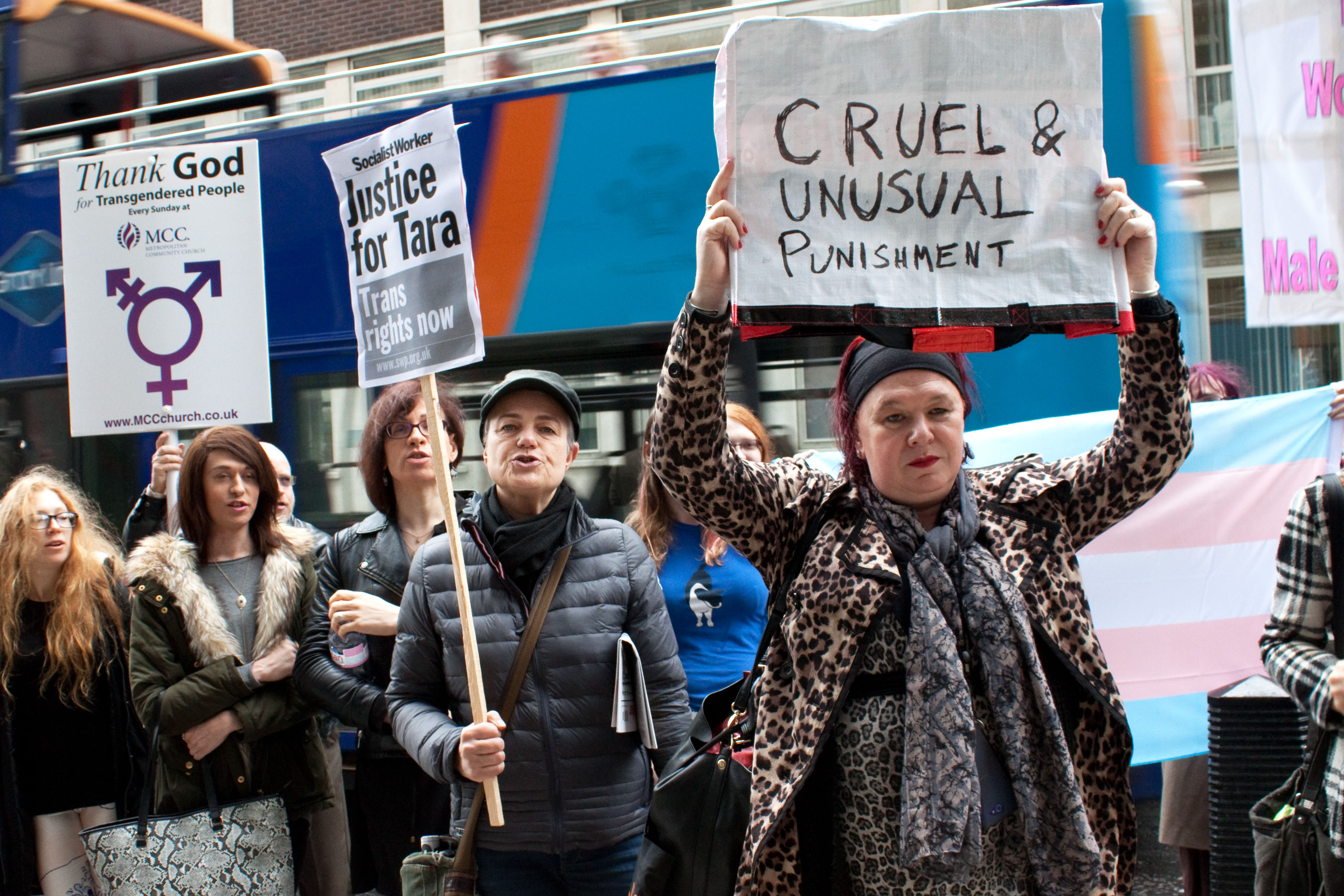 As I stood outside the Ministry of Justice, among 20 angry protestors chanting ‘trans rights now!’ in the name of Tara Hudson, it suddenly struck me at how ridiculous the entire situation was: why would anyone in their right mind allow a woman to be put in a male prison?

You may have seen Hudson’s case being shared and stirring up protest online. She is a 26-year-old transgender woman who, though assigned male at birth, has lived nearly her entire life as a woman. Yet after being found guilty of assault in a bar, she was placed in Bristol’s male prison. Many would would agree it was insanity for her to be in a prison with hundreds of men and the inevitable dangers of harassment and physical abuse.

At the protest on October 30, I was in the crowd and asked one young and rather quiet protester who was standing on the sidelines why she was there. She responded, “No woman should be sent to an all-male prison, especially not one as violent as the one she has been put in.” For context, Bristol HMP is a notoriously violent prison holding around 600 male offenders.

At the demonstration, a change.org petition to move Hudson to a female prison supported by over 150,000 signatures was presented to the Ministry of Justice. Eventually, Tara was moved to a female prison but I can’t help but have a sour taste in my mouth. This was not a one-off case. Around a month after Hudson was moved, on Friday 13 November  21-year-old Vicky Thompson, a transgender woman, was found dead in an all-male prison. Before sentencing she had expressed deep concern about where she would be placed and even told friends she’d rather be dead than in a men’s prison. With these cases in mind, perhaps we need to question how in the 21st Century, in a country that prides itself on supposedly being accepting and tolerant, do we still have situations where people are put at risk because of archaic understandings of gender?

The Metropolitan Police has revealed that hate crimes against transgender people has increased 25% this year in London. On Trans Remembrance Day (November 20) it was also revealed that 271 transgender men and women have been killed this year across the world. This bleak number is a stark reminder of just how far the trans community have still to travel in their journey to acceptance. Being a lesbian and coming from a mixed Middle Eastern background, I understand how sexuality and gender are complex issues that require nuance and I sympathise with anyone who has ever felt rejected by society. I am very much aware that I could not ever fully empathise with transgender men and women who, in some countries, fear even walking the streets without the chance of being hurt or killed.  After Tara Hudson’s story and seeing the increase in the number of hate crimes, I wanted to understand further the horrors that the transgender community are still facing today.

I continued this discussion with my friend Jade: we used to work together in a gay bar in Soho. Jade is a twenty-year-old transgender girl, still in the process of transitioning. We met up in Brixton for some Jamaican food with a side order of rum n’ ting. I asked her when she first realised that, though she was assigned male at birth, she was actually a girl. She responded: “You know it all of your life, it can be a subconscious thing that you don’t fully understand. The thing is with gender – we aren’t even educated about it. We don’t know that your genitals don’t define your gender. I had no idea about any of this stuff.”

She continued: “But then I saw someone posting online about ‘gender dysphoria’ and I clicked on it and started to try and understand transgender people out of sympathy. I started reading about it and suddenly it just hit me, I started crying and realised ‘Shit. This explains my whole life’. I have gender dysphoria.”

The NHS’s definition of gender dysphoria is “a condition where a person experiences discomfort or distress because there is a mismatch between their biological sex and gender identity”.

She continues, “[Gender Dysphoria] is what made me realise I was born a girl. I was 18 at the time. I wish I had been educated on it before, because I didn’t know this was even possible – I had all these confusing feelings and had been depressed since I hit puberty, and had no idea why. I had a lot of things I felt uncomfortable with and then suddenly knowing what it was to be transgender and that it was possible for someone with the ‘male anatomy’ to be a girl really helped me understand who I was.” 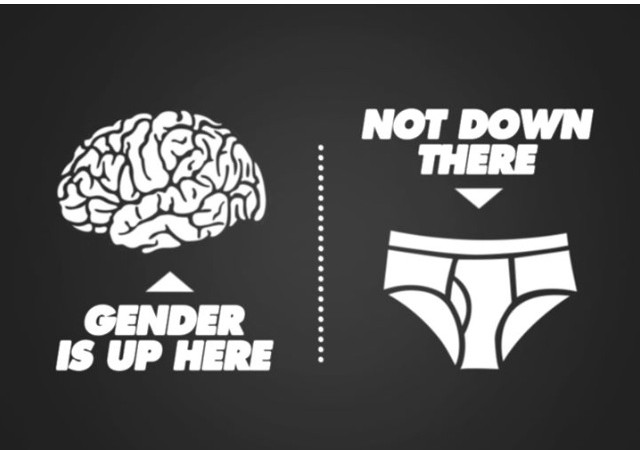 The debate seems to be infiltrating even mainstream celebrity culture. Singer Lily Allen recently posted a meme for Trans Awareness Week showing a picture of a brain with an arrow pointing toward it saying ‘gender is up here’ and a picture of underwear with an arrow pointing down to it with the caption ‘not down there’ which caused a lot of controversy online. In school, Most young people are taught that gender is solely linked to genitals but there is more than enough evidence and experts to show that gender is a lot more complex than that and is mental, not physical, if you do the reading. Let me put it this way, once upon a time we were taught that the world was flat. Christ, people even believed that if you swam far enough you’d fall off the edge of earth. That sounds ridiculous now doesn’t it? Well, that’s how ridiculous transphobic people are going to sound if they carry on believing the human mind is as straightforward and black and white as their own.

As much as people love to say “Omg, I wish I was born a guy! No pregnancy or periods”, or “I wish I was a girl: getting drinks bought for me and skip club queues”, the reality of it is, if your brain wasn’t programmed to the body you were born in, you’d probably feel trapped, scared and confused. There’s also a language which can be used to empower people within the LGBT* community which is often ignored (for example ‘cisgender’ refers to people who identify with the gender they were assigned with at birth. Using the correct pronouns such as ‘he, him’ and ‘she, her’ is also something which is hugely appreciated among the LGBT* people. Not using terms like this or understanding how to use them when we discuss these issues is problematic because it can come across as a lack of understanding or respect.

Hate crime is a product of ignorance. But in an age where we have information readily available to us at the touch of a finger on our smartphones, is there an excuse for it any more? Following the conversation, I attended a panel discussion at UAL on ‘Trans visibility in the 21st century’. It was here that I learned that everyone has a different idea on what gender is. It seems to be a unique and personal thing for each person. After the panellists were asked how to define gender – one person replied “I’ve been trying to define gender my whole life. I change all the time, sometimes I might feel like a girl and the next month I might feel like a boy”. This is known as being ‘gender fluid’.

So how are these issues playing out in pop culture? Love of my life and Orange Is The New Black actress, Ruby Rose, has always been vocal about identifying as ‘gender fluid’ and has previously criticised society’s rigidity over gender identities. In an interview with Elle magazine in June she said: “Gender fluidity is not really feeling like you’re at one end of the spectrum or the other. For the most part, I definitely don’t identify as any gender. I’m not a guy; I don’t really feel like a woman, but obviously I was born one. So I’m somewhere in the middle, which – in my perfect imagination – is like having the best of both sexes. I have a lot of characteristics that would normally be present in a guy and then less that would be present in a woman. But sometimes I’ll put on a skirt – like today.”

This got me thinking. I’ve never felt comfortable in a dress, and anyone who knows me will know I’m a bit of a ‘tomboy’ in personality. As a child, much to my mother’s dismay, I lived in khaki, baggy trousers. I even remember at 16 asking organisers of my prom at college if I could wear a suit instead of a dress (and being told a dress was compulsory). The idea of wearing a dress totally stresses me out. To me, they’re just impractical and make me feel awkward. I guess this gave me a slightly better understanding of my personal take on gender fluidity.

Of course, the clothing you choose to wear doesn’t determine what gender you are, but regardless children should be allowed to wear and play with whatever they want. The fact is, gender is complex and social constructions of femininity and masculinity unfortunately also have a huge part to play in how people identify themselves and each other.

At the panel talk I spoke to 23-year-old trans activist Charlie Craggs who has just appeared on the BBC speaking about transphobia. We had a long chat, spoke about everything from the LGBT* community not doing enough to support transgender men and women to transphobia in universities and a campaign she has launched called Nail Transphobia. We also spoke about the importance of having gender-neutral toilets in learning spaces (there’s currently a campaign running by the students union at UAL to get them put in place).

Charlie explained that she felt uncomfortable and even scared at times to use gender-specific toilets all through secondary school, college and uni before she was trans. ‘I went to the same school for seven years and went through my entire time there without using the school toilets once out of fear for my safety. I remember holding a wee in from first period to when I got home at 4.30 once, I was in agony for 7 hours. Then on my last day of school, I was about to sit my final A-level exam but really needed a wee and knew I wouldn’t fulfil my potential in the exam if I was in pain for 3 hours, but was too scared to use the toilets. So I had to walk twenty minutes to the nearest tube station to use the toilet there. Luckily I got back just in time for the exam (and got 100% in it) but I shouldn’t have had to walk twenty minutes to feel safe.’

Some of you may feel campaigning for gender-neutral toilets is petty, but making small changes like this or not giving children gender-specific pink or blue toys, allowing people to wear whatever they want and so on will eventually soften society’s rigid attitudes toward gender. Whether it’s the language we use, fighting for gender neutral toilets, engaging in organised debate, attending protests or even just calling out and standing up to transphobic hate on social media – we can all support and show solidarity with one another in our own way. Once attitudes change, we will all have a better understanding of one another, move forward as a society and hopefully more lives will be saved.