In recent years, Russia has become more closely associated with the fashion world thanks to some high-profile names in the business.

For decades, the Russian perspective on aesthetics has been linked to both the post-Soviet avant-garde, and the socialist realism that preceded the fall of the Berlin Wall.

Mass production due to the political and economic situation in the former Soviet Union has dogmatised the way people dressed, lived, entertained and how they were seen by the world for years.

After the collapse of the Soviet Union, Russia, along with the other USSR countries and those “in the periphery”, went into socio-economic and political transition.

The switch in this mentality took some time; it started with the perestroika period during which borders opened and the import of Western products allowed the expansion of the retail market.

Despite the raging capitalism in Russia at the moment, which has resulted in the devaluation of the rouble and the political instability in foreign policy (as demonstrated by the Russian plane crash in Egypt), the Russian elite maintains a strong and expensive taste for fine living.

The 24 years since the fall of theSoviet Union have not allowed these transitions to be 100 per cent feasible, but in some fields, like fashion, certain tendencies have been encouraged.

Being characterised as a country of corruption and dodgy business, certain classes of Russian society flourish financially and prefer to spend their money on producing and purchasing luxury goods.

Aliona Doletskaya, the editor-in-chief for Russian Vogue, told The Guardian that ostentatious displays of wealth among Russian elites are no longer as common as they once were.

They still wear luxury fashion but the clothing is more sophisticated, and as a result,  the term “luxurious” has drastically changed over the past few years.

Recently, this has evoked two types of nostalgia.

On the one hand, we see a trend of folklore-inspired traditional Russian dresses (sarafans) worn by peasant women.

This technique has been translated into high-fashion floral gowns and bright ethnic motives; a trend that has been adopted by the “czarinas”, a group of Russian high-fashion ladies.

They are featured regularly in the media and include Miroslava Duma,  the daughter of a Russian senator and founder of fashion platform Buro 24/7 and Vika Gazinskaya, another well-known blogger turned designer.

There is also a former model, Elena Perminova, the wife of Alexander Lebedev, publicly known as a former KGB spy but now a banking oligarch worth over $1 billion (£660 million) who is the joint-owner of The Evening Standard and The Independent.

Another member of this elitist fashion circle is designer Uliyana Sergeenko, thanks to her high-priced clothing brand, worn by celebrities like Rihanna.

She the wife of Russian insurance magnate Danil Khachaturov, owner of the biggest insurance company in Russia with an estimated of $2 billion, according to Forbes.

The czarinas’ rise to prominence seems likely to be the result of the rapid growth of Russian fashion style blogs, backed with Russian money, that has accompanied the setting up of each of these womens’ businesses.

In the same interview, Olga Mamonova, who is the vice president for JamilCo ( the company responsible for the import of Hermès and Burberry in Russia) explained that “the state wasn’t reliable” for providing a wide range of choice for products; so, she took her chance when a “businessman” approached her to start a consultancy firm at the time.

Things evolved fast. With the rising price of oil came the demand for more and more expensive products. Mamonova claims that “now it’s not just about money.”

Luxury has to be understood as a priority not just for the billionaires, but also for the aesthetically educated, who value the status certain products give them.

Of course, as Mamomova admits, realistically speaking, today “it’s all in the thousands” – in other words, all about the money.

However, regardless of the financial side of the argument, it is true that Russian socialites have managed to reinvent the image of Russian fashion tastes. Or at least, the tastes of rich Russians.

Alongside this we have seen designers drawing inspiration from Russian youth of the 1980s and 1990s.

Gosha Rubchinkiy’s decadent vision of skateboarding sportswear has given new direction to a younger generation of underground designers, such as ZDDZ, Anton Belinskiy and Zirochka Ukraine.

The way international fashion houses turn their faces more and more to the East reflects the swift change in fashion in that direction.

An example of this was Balenciaga’s surprise selection of Georgian designer Demna Gvasalia to head up the Paris-based fashion house after Alexander Wang.

The Georgian-born ex-Louis Vuitton and Maison Martin Margiela trainee (and now the creative director for Balenciaga) would take over only three seasons after the debut of his own brand Vetements. 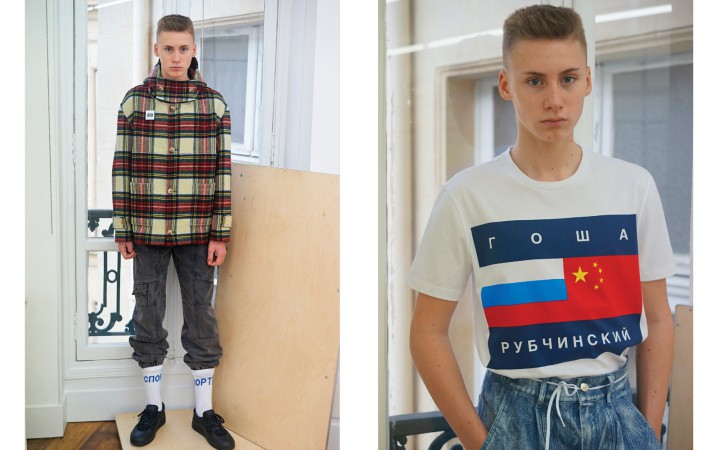 Vetements, (the French word for clothes), started as an independent streetwear and urban-inspired brand with a studio of seven designers, including Demna’s brother, Guram.

Alumna of Antwerp’s Royal Fashion Academy, a famous cradle for international conceptual leaders like Martin Margiela himself, Ann Deeulemeester and recently departed Dior creative director Raf Simons, Gvasalia has never been the most obvious candidate for the position.

Nevertheless, his work along with six other “anonymous” designers who follow the Margiela concept of invisibility and pure focus on the creation of distinguishable garments with edge, but yet wearable and relevant to the high-end brand, has not stayed unnoticed.

With the choice of Chinese restaurant somewhere in Paris for their Spring/Summer 2016 and the most unpretentious casting you could imagine, starring friends and family, Gvasalia seems to be the antithesis of what could be considered a creative choice for a conservative company.

The opening look – a T-shirt bearing the logo of courier company DHL, described by observers as ‘anti-fashion’ – and most of all the fact it was worn by another designer who has set the fashion world on fire recently, Gosha Rubchinskiy, has redefined the notion of what is considered “cool”.

In an interview with Lou Stoppard for the website Show Studio, the Moscow-born designer explained that he, Demna, and Lotta Volkova  (another Russian who is a fashion stylist, featured in Vogue) decided on the setting and the ease of the way that the clothes would be portrayed.

This is what Rubchinskiy has perceived for his own brand as well. He has established this concept as a new standard; what we see in his collections is an approval of all those clichéd sportswear garments.

In the interview he claimed that his goal is to “improve” the way people see Russian fashion. His, as well as Russian designer Dasha Selyanova’s, (ZDDZ) aim is to do that through various visual representations such as videos.

Rubchinskiy recently released a new book, Youth Hotel, which sold out within minutes of its launch at Dover Street Market a few weeks ago.

‘It’s all very structured everywhere and Russia is still this mysterious dark place with these weird looking kids.”

I could almost picture myself wearing those Fila-alike shorts and waiting for my turn to play volleyball in my early school days. This is pretty much what we see with Rubchinskiy’s 1980s designs, which are reminiscent of a post-Soviet neo-romanticism.

Yes, there is a “strange feeling” that evokes a certain melancholia, backed up with some low-fi DIY techno – the soundtrack that Rubchinskiy’s friend has created for the catwalk.

Dasha Selyanova, the designer of Russian streetwear brand ZDDZ, shared her position regarding this tendency of interest towards the East:

“It’s kind of new and a sort of an unmapped territory and people from the Europe and probably the rest of the world don’t really understand Russian thinking but I think secretly interested in understanding it,” she said.

“Everything else has been boxed and labeled pretty much like, for example, London now. It’s all very structured everywhere and Russia is still this mysterious dark place with these weird looking kids.”

What is certain about the impact of all of these designers is the need for “minimalism and rougher” reality.

As Selyanova refers to it, it’s “not about being Eastern European or Japanese or something else but it’s more about the global need for the simplification of things, for making them a bit more rough because everything has become too polished and nice, and it’s sickening.

“It just happened that Russia is there to offer it, that maybe we’re a little bit behind in some ways, and therefore we can offer this a little rougher aesthetics, which is more straightforward and brutal.”