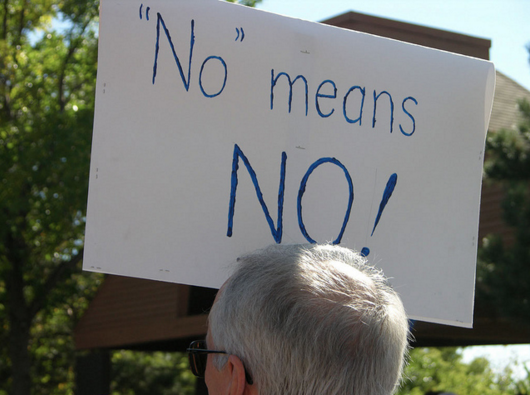 In 2013, Robin Thicke’s “date rape” anthem Blurred Lines shot to the top of the charts, much to the dismay of women around the globe. The chorus “I know you want it// you’re a good girl,” coupled with a highly derogatory video where naked models strut about followed by the eyes of (fully clothed) men, made it an instant misogynistic anthem.

The single, and Thicke, sparked global outrage as protestors at Chicago’s 2013 “Slutwalk” claimed there are “no blurred lines when it comes to sexual harassment”, and the song was banned from multiple universities for its promotion of non-consensual sex and sexual harassment.

Two years later, alarmingly high statistics have surfaced stating that one in seven female university students will experience a serious sexual assault during their years of study, with a further 68% experiencing some form of sexual harassment. With such worryingly high figures, it’s not hard to see that there are some blurred lines as to what is considered as appropriate behaviour and consensual sex.

Throughout sex education at secondary school, we weren’t told anything about consensual sex or its importance. Our teachers seemed more concerned with the schools aversion techniques of abstinence as opposed to telling us about the dangers of rape and sexual harassment. In one lesson, we had a substitute teacher in who momentarily digressed from our lesson plan and proposed we all ask sex-related questions.

Naturally allowing a room full of hormonal 13-year-olds to ask whatever they wanted, the boys were bickering over who would get to ask about blow jobs and 69s, and yet when one of the girls asked “what is rape?” our teacher answered “not a very nice word”.

As the most important question in the room was avoided, it was my first indication that even at a young age, we are not being properly educated about the dangers of sexual predators. Important facts being left out of the school curriculum will undoubtedly have an impact on how both young men and women view sex.

A vast majority of university students, if asked, would no doubt be able to clearly define what rape or sexual harassment is, and yet the numbers say otherwise. If the lines are so clear-cut, then why are so many young women coming forward reporting inappropriate and illicit sexual behaviour?

Laura*, a university student in London was raped by in her halls of residence during her first year, and spoke to me about the misconceptions of consensual sex. She said: “my attacker blamed me for leading him on and giving mixed signals, when I believe I couldn’t have been clearer about my boundaries and I definitely wasn’t asking for it”.

Laura praised her university for its efficient handling of her complaint, but is still deeply affected by the event. “For a while I questioned whether it was my fault, but now know I did everything I could to prevent him and that victims are not to blame for their attackers cowardice and ignorance”.

A misconception amongst both female and male students seems to be that by inviting someone back to your house or by agreeing to go with them to theirs, it means consensual sex is on the cards. Although this may be the case for a few, people seem to forget they are under no obligation whatsoever to comply with the demands of the person they’re with.

I spoke to Lucy*, a student who was sexually assaulted in her home after inviting someone she met on a night out back to her house. “I was drunk but fully aware of what I was doing, as I’d met the guy with a group of my friends, and we’d travelling home as a group, I didn’t feel particularly threatened,” she said.

After retiring to bed, Lucy fell asleep with the guy she’d brought home next to her. “I woke up after feeling his hands all over me, and jumped out of bed when I felt his hands ride up my skirt”. After raising the alarm to her housemates, he quickly left the house, thankfully without a fuss.

“At first I felt sorry for him as he seemed confused and embarrassed when I asked him what he was doing, but then I realised, I shouldn’t have felt sorry for someone who clearly knew what they were doing. I was asleep and therefore couldn’t give my consent to his actions and that’s not acceptable”.

I’ve spoken to multiple women who’ve been left feeling confused after being harassed by men they’d invited home with them. It’s worrying that both men and women are unaware of what is considered as consent, and as a result, are not raising the alarm when confronted by inappropriate behaviour.

Such behaviour is regrettably not just seen in private, but exists just as prominently in public places or on public transport. In April 2015, TFL started a “report it to stop it” campaign, which was fronted by an advert about unwarranted sexual harassment.

In the advert we see a young woman being followed around the carriage of the train by a man who persists on invading her personal space and groping her. In a bid to crack down on such behaviour, TFL are encouraging people to text “what, where, when” if an incident occurs, hoping to lower the current 10% of passengers that are sexually harassed on public transport in London.

Although the steps taken by TFL are helping to raise the awareness of unwarranted sexual behaviour, this campaign is predominantly aimed at adults.

Despite still being incredibly useful in allowing the public to feel safer on transport, younger people are not being reached out to. With our schools’ curriculums missing essential information on non-consensual sex and sexual harassment, how can we expect young people to know how to protect themselves?

Raising awareness of sexual harassment, and how to cope or reach out to someone if you’ve experienced it is something that should enforced immediately throughout schools and universities. There are no blurred lines when it comes to sexual consent. Fuck you, Robin Thicke.

*Names of the people interviewed have been changed