The strange and intriguing way that Helen Persson has curated her exhibition was the first thing to strike me when I arrived at Shoes: Pleasure and Pain.

Both this and the luxurious, curving space in which it resides is entirely representative of the prestige and status that shoes have represented for hundreds of years.

Both sense and sensibility intertwines as Perrson takes you through three separate themes: “transformation,” “status” and “seduction”; spanning centuries and seasons to bring together the history and the breadth of culture behind shoes from around the world. 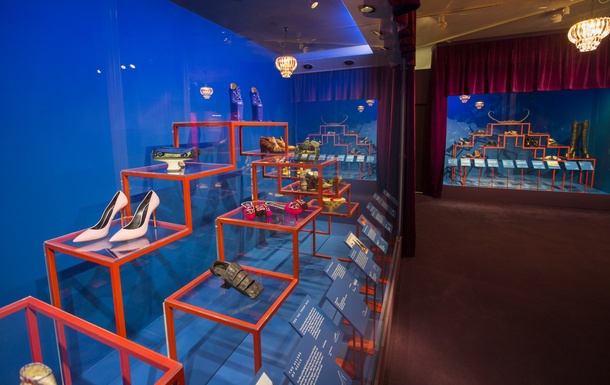 “Transformation” takes you through a kaleidoscopic whirlwind of time in a treasure trove of colour, thrill, and delight depicting the myth and magic of shoes.

The exhibition depicts many cultural interpretations of Cinderella, from the ornate satin slippers of the East to the iconic feathered Jimmy Choo’s worn by Carrie Bradshaw in Sex and the City circa 1999.

In “Status,” the stark divide between the have’s and the have-not’s has never been so apparent.

Persson notes that “in ancient Rome and Greece, free men wore shoes and slaves didn’t. The distinction is as ancient, and as stark as that.”

Heels and platforms are used literally to bring the wearer above one’s peers and out of the dirt and puddles of Venice; a minuscule statue of Aphrodite from the first century BC depicts her wearing platform sandals. 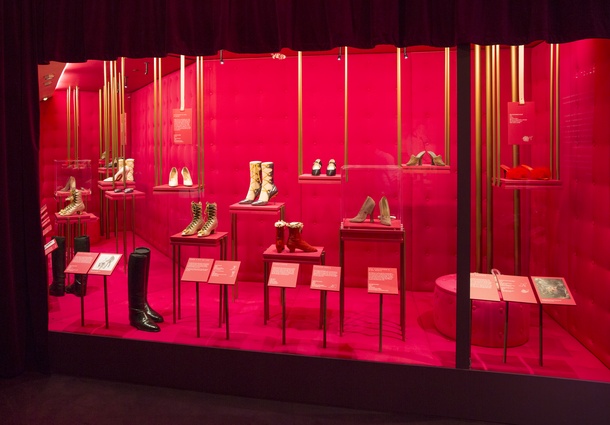 “Seduction” was one of three installations at the exhibition [V&A]

Persson’s story of shoes often depicts their tragic history, displaying the pain behind the beauty.

The minuscule shoes belonging to a Chinese Geisha are only 10cm long, made from delicate silk, and painstakingly hand embroidered, ensuring that the wearer can only shuffle forwards centimetres at a time, with a gait and poise unlike any other.

In “Seduction,” no pair of shoes is more fitting than the vertical Christian Louboutin fetish heels which cause the wearer to do no more than crawl across the floor.

This installation shows that sex has always been synonymous with fashion, even in the days when we were less liberal; we have always used fashion and shoes as a means to seduce.

The provocative and evocative nature of the display is very much accentuated by their sponsor, Agent Provocateur, displaying the sensually seductive side of fashion.

The start of Persson’s story begins with the shoe of a medieval man, frail and pointing, yet despite its age, it is still gleaming with the eccentricities of fashion and design.

The ability to take a glimpse at thousands of years of design history allows us to visualise the cyclical nature of fashion. The same materials and embellishments appear in today’s designs as they did centuries ago; feathers, jewels, crystals and animal skins all have the same purpose and the same story.

Featured image by the V&A