It’s strange how quickly things adapt in the 21st century.

Ten years ago I knocked on friends’ doors or rung their house phone. Then came the mobile, the text message, Myspace, MSN. Bebo was ephemeral, quickly dwarfed by Facebook.

I remember when Facebook Messenger first existed. That was peak internet for me. There could be no more.

But now, in 2015, Zuckerberg’s creation has grown into an all-consuming nine-headed beast. Facebook is the Internet. We’ve all stopped searching.

Now, as a journalist, this worries me for a number of reasons. One being that Facebook has a monopoly on all the content that just over a fifth of this planet’s population see in their daily lives.

Except news isn’t content, IT’S NEWS, and of utmost importance to the functionality of any democracy.

A study from the Reuters Institute found 22% of Brits of all ages use Facebook as their primary source of news, while in America it’s much higher at 49%.

Tailored content to suit your interests based on advertising algorithms trawling your likes, shares and interests may sound like the future of news, but it has a sinister and, potentially undemocratic, side.

The app now allows verified journalists to take part, and the BBC had Robert Peston sat behind a live stream in the newsroom discussing the Autumn Statement and responding to comments from viewers.

Sounds good. And it is, so long as you’ve recently interacted with the BBC Facebook page, otherwise you’d probably miss it.

If you did miss the stream, it’s because Facebook’s algorithms decided you didn’t want, or need, to watch it, and will push other content your way instead.

This may all seem quite innocent I’m sure, and the Live service has been around for a while, as some people will be aware; sports personalities and celebrities like Serena Williams and Ricky Gervais have used it to connect with fans to great success.

Expanding the service to include journalists and ‘influencers’ however, has come at a crucial point in time: the run up to the US presidential elections.

What may seem like a novel idea to engage users, just turned into an experiment in direct democracy. 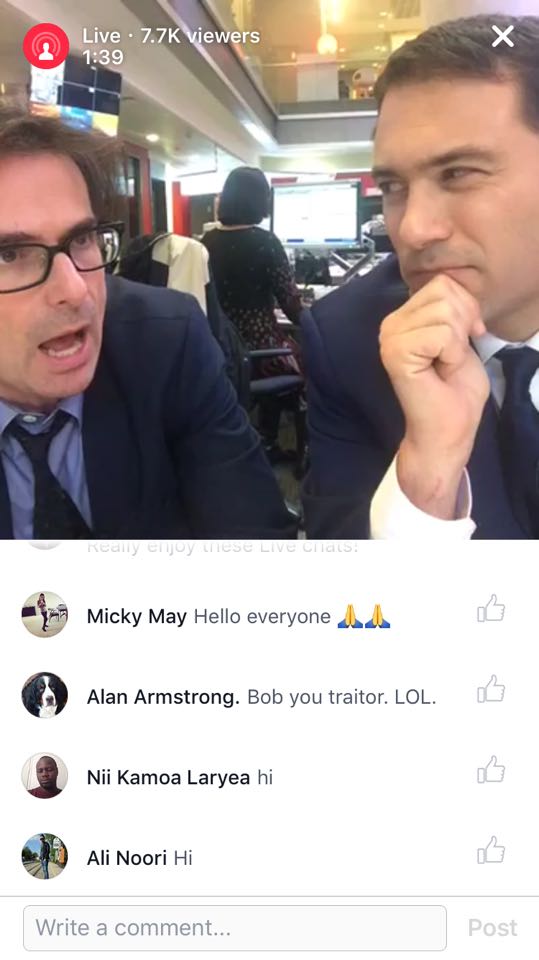 Let’s say Donald Trump, who claims to understand social media “maybe better than anybody, ever” decided to use the Live feature.

You’re an undecided voter but in the past have engaged with articles about Trump because, frankly, it’s hard not to.

Assuming you’ve liked his page, a notification about his Live feed will pop up.

Say Hillary Clinton also tried Live out, but you hadn’t shown the same interest, nor liked her page, the chances are you wouldn’t have a clue about the feed.

Which candidate now seems more engaging to the undecided voter?

The problem is that giving more air-time to whoever has the biggest reach is essentially media bias, and potentially undemocratic; it creates an echo chamber, where one side always gets more contact than the other.

Instead of being presented with a broad array of views, where one can make one’s own mind up about something; the repetition of a prevailing view has the potential to limit debate through ignorance of the other.

Consequently, if you view a lot of the same thing, it is more likely to cement in your mind the inferiority of other options.

Facebook’s Live feature isn’t the only way the site can change opinions through irresponsible algorithmic behaviour, nor is this a new phenomenon.

What we need to remember here is that Facebook is little more than a constant stream of advertising: out of the pages you have liked, only those who pay to be there get space in your news feed in the form of status updates, adverts and sponsored posts.

The internet was once hailed to be the “great leveller of democracy” due to its capability to share and discuss information in a global public sphere, but if the news we are being shown – and therefore discussing – is the result of potentially partisan news outlets buying up more space in our newsfeed than others, then Facebook can clearly be abused as a tool to undermine the democratic process.

When newsworthiness is calculated by an algorithm, it takes editorial power away from those actually producing the news, and the nature of the “like economy” ensures that if misinformation such as celebrity rumours, hoaxes and conspiracy theories get enough likes to go viral, they can appear in your news feed, indistinguishable from actual news.

This does little but limit a user’s world view through repetition of self confirmatory information that blurs the lines between opinion and fact.

Facebook dwarfs every other news outlet on the planet in terms of size, financial resources, influence and output, yet shirks responsibility for distributing news with regards to the values of the free press.

Values like accuracy and accountability, protection of free speech, standards of information, transparency of sources and knowing when it is unethical to publish something.

Emily Bell of the Tow Research Centre rightly claims that news values “balance individual rights to privacy with the broader right of the public interest”, but as it stands, what is potentially the world’s biggest news source just isn’t doing that.

To that end, what has happened is that Facebook has essentially become the free press and TV news combined, “taking over many functions of the mainstream media” in the words of Bell.

News outlets are now slaves to their algorithms and a one-way dependency exists where journalists are always engaging on Facebook’s terms.

“We have surrendered control of information to the systems that deliver it,” says Bell.

Although presently the platform can be construed as potentially undemocratic, interestingly Facebook have conducted experiments in democracy before.

At the last general election here in the UK they prompted every adult user in the UK to vote.

They haven’t released any stats to say whether their intervention increased voter turnout, as it did in America in 2012, where Facebook conducted experiments on millions of people to “test the efficacy of various interventions” by using algorithms to try and increase voter turnout.

If Facebook want to start acting like a broadcaster, they need to read the same book of rules.

One of these “interventions” was to show 1.9 million users an increased number of hard news stories, and it worked well; people were better-informed and more likely to vote.

It shows that the social media giant is interested using its resources and reach to uphold democratic principles and ethics, but that just further begs the question: why not those of the established media?

The Live feature has a lot of potential to further democratic ends, but if public figures and “influencers” are going to be broadcasting live, original and potentially important content on their site, then Facebook need to ensure it is accessible and not distributed on a highest bidder basis.

They need to be a responsible and balanced distributor of news. Whether the users actually view it or not is irrelevant. This is an ethical issue; if Facebook want to start acting like a broadcaster, they need to read the same book of rules.

We need to consider algorithms as being a human construct, but made by humans that have no knowledge or expertise of the moral consequence of news publishing.

The algorithms that rule our lives exert power by prioritising some news rather than others – they categorise you or I as being one person rather than another, and filter what we see accordingly.

Facebook need to work with journalists to produce algorithms that uphold the moral values and standards of the free press for the furtherance of democracy, balanced with our endless thirst for cute cat videos.

Because they’re the biggest player in the field now, and whether they like it or not, they need to be accountable – just like the news outlets that rely on them.