One of the brightest events in the fashion calendar in recent seasons has become London Collections Men. Also known as Men’s London fashion week, according to GQ editor-in-chief Dylan Jones, LCM plays important role “both commercially and creatively” for the industry.

The initiative was launched by the British Fashion Council back in 2012 and is at a fast pace growing rate more than London Fashion Week. According to a Mintel report menswear collections has grown by 22% in the past five years. With an estimated 4.5% yearly growth, the menswear market little by little has become the centre of attention for the fashion world.

What we observed this season was a wide-ranging blend between punk, military and 1990s and 2000s nostalgia. Colours were predominantly dark and sportswear was the main focus of most of the designers. Another highlight of the shows was the cultural richness and diversity of the castings.

Since his appearance on the fashion scene in 2013, Cypriot-Turkish designer has gained great recognition. Having skipped one season  due to his father’s death, Mazhar introduced an all-black tribute to him, following his last season menswear show.

The collection included the iconic tracksuit sweatpants branded with the designer’s name, as well a headpieces made of buckets, wrapped with clothes. Models were rocking New Metal boots and sophisticated “chillwear” as the designer himself refers to his own style.

What we also saw was the variety in the models casting which was a direct reflection of the multicultural influence Mazhar has. In an interview for Dazed, the designer stated that Instagram was his main tool of scouting his catwalk models.

Padded shoulders and armoured jackets that were essential parts of the looks, are a response of the designer’s fascination with the craft of metal making. In the same interview for Dazed, the designer shared his initial career-goal which was to become a craftsman of armours.

Nevertheless, even though this was not eventually the scenario, he managed to incorporate this interest in the sexed up collection, exploring extreme masculine aesthetics and androgyny.

What we saw was that the 90s revival is still a strong trend on the catwalk. Exposed underwear and high-waist branded thongs became the leit motif of the show.

His recent collaboration with Star Wars and Disney-inspired “Little Mermaid” collection have proved his ability to play successfully with pop culture references.

Having embraced cartoon characters, bright colours and mainly Brazilian culture this season, his show looked more like a the 2014 FIFA World Cup opening.

Abley’s Brazilian adventure was brightly illustrated in Turkish blue, bright green and orange and showed his take on traditional work wear garments and cropped shapes. His emblematic “teddy bear” logo was present in the prints which again had drawn inspiration from popular characters. They also contained slogans such as “drugs” and “The fuck club” emphasising on the irony of contemporary t-shirt slogan culture.

When it comes to bright colours and playful presentations, British brand SIBLING is one of the best in the game.

Initially, a collaboration between Joe Bates, Sid Bryan and Cozette McCreery, the brand is now run but the last two after Bates’ death last August.

This season the duo made a massive menswear comeback with direct influence from boxing sportswear and chunky knitwear. Models were wearing towels wrapped around their waists reminiscent of skirts and decorated with disproportionately big medals. A strong aspect of the show have been the contrasting knits and the padded shoulders of the jackets which gave a very manly look of the garments.

Speaking of helmets and fighting facilities, another sportswear brand also made a strong statement.

The collection drew inspiration from subcultures that share ritualistic devotion and sense of uniform commitment as a form of insignia, a certain feeling of belonging.

Inspired by war conflicts and Tibetan Buddhists robes, the core colour this season is entitled Lama.

Despite the obvious cultural references, the brand’s pacifist approach towards military design has been reinforced by the choice of dusty pink and graphic prints.

The main fabrics for next season are nylon and Japanese polyester.

The spiritual devotions reference has played main role in the brand’s ethics and seeing reggae legend Don Letts march along the rest of the models created a sense of recognition and belonging to a tribe, an army of Maharishi boys.

Another brand known for its tribes of fans wearing monochrome t-shirts is London-based KTZ (Kokon-to-Zai).

In their AW16 show designer Marjan Pejovski took cross-cultural references from Russian Futurism to American sportswear. He was inspired by Kraftwerk which was reflected in the show’s soundtrack.

Going through the pictures makes the viewer feel almost like they’re in a “boy’s sports room”.

The collection presents a blend of geometric prints, branded patches with logos and minimal colour scheme-the traditional black and white and a splash of blood red.

The silhouettes are structured with baseball lacing and tailored jackets with Windsor lapels. The most notable accessories were the extra big sunglasses which gave some 80s feel to the whole collection.

This season’s catwalk show has featured musician Coco Sumner, known as I Blame Coco, who also appears to be Sting’s daughter. She presented two looks including the closing part of the show which was loudly applauded. Once again, KTZ’s boys and girls made a strong statement for the Autumn/Winter season.

Danish designer Astrid Andersen presented once again this season a mixture of 90s and military, combining the typical for her aesthetics contrasting lace, this time in gold, olive and mint green.

Models wore rounded Lennon bright orange glasses and fur hooded nylon jackets. The choice of bright red and contrasting grey were the highlights of the collection.

The menswear line of Alexander McQueen  has never been in the limelight but this season’s take on punk culture introducing safety pins as jewellery, reflected strongly the brand’s core rebellious aesthetics.

Details of the garments include digital prints of butterflies on tailored fitted suits.

The show took place in the Foreign and Commonwealth office and included performance on piano by William de Courcy.

After the designer’s death in 2011 his former assistant Sarah Burton has been responsible for the brand’s designs and her approach has been defined as “romantic”.

Another direct reference from punk has been the presentation of Chinese designer Sean Suen. His show was inspired by Sex Pistols and more particularly Sid Vicious.

Focus of the show looks were multiple body piercings and improvised tattoos, along with tailored jackets and chaotic hairstyles. Leather wear and heroin chic were the core instruments of Suen’s take on modern masculinity.

The fast growing menswear market reflects the augmented interest in clothing produced in Britain. In addition, the report shows that 27% of British men prefer British accessories and shoes.The online growth between 2010 and 2015 is of 17.4%.

The growing interest in LCM is the result of careful planning and good marketing. For instance, this year the event has been advertised on the screens at Piccadilly Circus. LCM is also chaired by GQ editor-in-chief Dylan Jones who was responsible for the daily coverage of the shows and parties.
There were also exclusive events like series of talks by industry professionals like fashion journalist Lou Stoppard and Diesel creative director Nicola Formichetti at The Century Club. 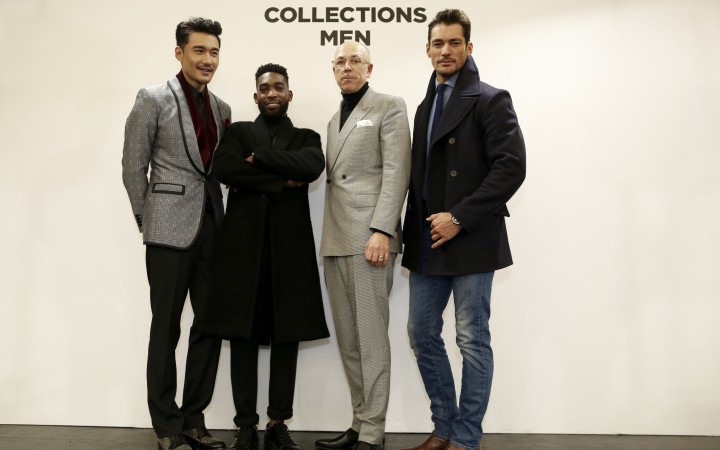 Another aspect of the extended publicity of London Collections Men is the focus on personal style thanks to the street wear and streetwise coverage in the streets of London. This has created a new perspective on men dressing according to trends.

Apart from the traditionally showcased pioneering tailoring studios like Gieves & Hawkes, where the young Alexander McQueen got the know-how for the creation of his own eponymous brand, today LCM has become the scene for numerous up and coming designers. Androgyny is embraced and being aware of next season’s fashion forecast for men has become equally important as it is for women.

According to Dylan Jones in an interview for The Evening Standard, the reason for this is mainly in “generational shift” He says LCM wouldn’t have been as successful as it is now, if it had taken place ten years ago. “Men shop more like women now” and it’s a sign of “making effort”.

Jones says, “it’s the fashion designers leading the menswear movement who are influencing the sector, its sales and the relationship men have with their clothes”. Thanks to the popularity of the event since its creation in June 2012, LCM has attracted 81% more American press and buyers. The percentage for their European colleagues is not less impressive, 91%, and from China it has grown by 185%.

Another tool for attracting media attention is the attendance of LCM ambassadors such as popular models and artists, like Tinie Tempah, David Gandy and Nick Grimshaw who support the showcase thanks to their public status.

The trade show is covered not only on a local level but it’s internationally acclaimed leading to men’s market expenditure, exceeding women’s for the first time since the late 1990s. This has resulted into the widened high-street retailers’ market and a “growing demand for affordable trend-led pieces”.

In an interview for The Financial Times, the chief executive of British Fashion Council, Caroline Rush explained that “the economic impact” of LCM” “is twofold, with a short-term spending boost” for the local hospitality sector (hotels, restaurants, etc.)

The long-term value of the event is fixed on the “international show calendar” which “reinforces London as a highly influential” style capital. It also bring millions of pounds from tourism and boosts future retail sales.

The showcase has created a new niche for young London designers and broadens the spectre of menswear in general.

Caroline Rush also said that the BFC have “created an identity and celebration of British businesses” where there hasn’t been one , “that puts clothes into a local context” creating a urban fashion story.

Furthermore, the NEWGEN initiative, which is part of the showcase is a tool for supporting young designers and their emerging brands. Created in 2009 and being in partnership with Topman and Fashion East’s MAN, the NEWGEN MEN gives the financial help and mentoring to 12 young designers. In addition to this, in 2013 the Designer Menswear Fund between BFC and GQ fund has been created as a mentoring scheme for new starters to push their businesses to the next stage of their development. 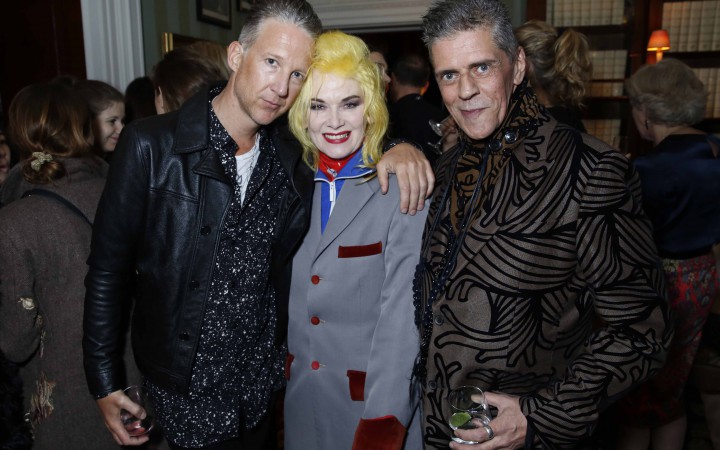 Another strong supporter of the initiative is the creative director of heritage company Burberry,Christopher Bailey who explained that by the “strong tradition of menswear in Britain”. He referred to “tailoring” and “menswear classical pieces’. He defined British style as “classic” and effortless”.

Overall, next season’s main influence would be military camouflage and rebellious subcultures. Bright colours and androgynous transformations along with sharply tailored jackets and sportswear nostalgia reflect the future trends that have been evolving for the past couple of seasons. Experimentation would also play a strong role in the way fashion will continue to be seen thanks to the vivid street wear and street style we have been observing. Combined with the growing number of British designers showcasing their interpretations, cultural variety and open-mindedness are still the strongest trend of the season thanks to the style stories created in the streets of London.