Who are April Towers? 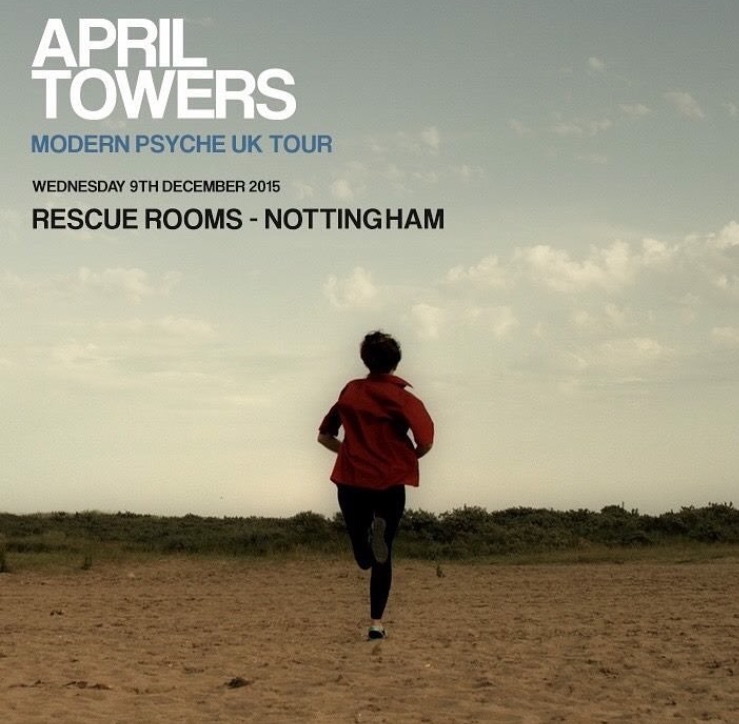 The home of Robin Hood, HP sauce, the VCR, Ye Olde Jerusalem Inn (the oldest pub in Britain), and now of April Towers.

Nottingham’s not particularly famous for producing musical talents. Don’t get me wrong, it has produced some gems over the years; Saint Raymond, Ten Years After, Dogs is Dead, Ronika, Jake Bugg and Sleaford Mods to name but a few.

However, now comes the birth of something completely original. Described as “a remarkably independent pop phenomenon” and “The Pet Shop Boys on speed”, this duo are worth looking out for in 2016.

Boasting more than 173,000 Spotify listeners in the two years they have been together, people are starting to sit up and take notice of this endearing duo.

Having had their hit single Arcadia played on daytime BBC Radio One by Fearne Cotton, April Towers’ rise is quite impressive. 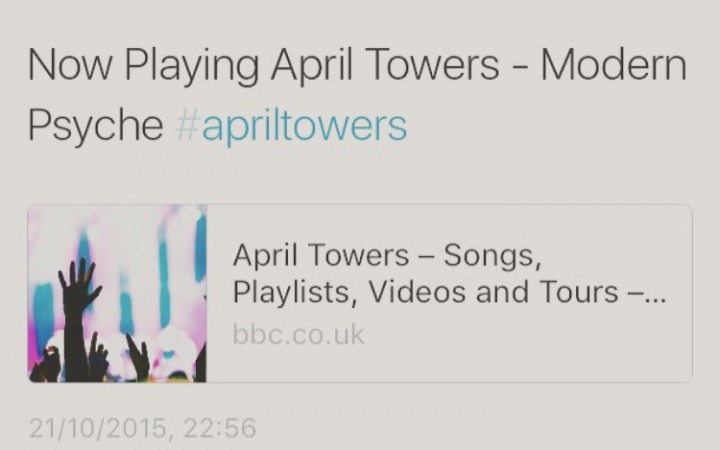 April Towers, as heard on BBC Radio One

April Towers have a dynamic sort of sound, a mixture of efficacious lyrics with a thick, rippling beat.

Performing at their first European gig at Ibiza Rocks, playing at British Summertime Festival, making it onto the FIFA 2016 soundtrack, filling venues up and down the country, and with impressive reviews across the music world, 2015 was a significant year for them.

Artefact went down to watch the guys headline at Rescue Rooms in their hometown, performing to a sell out crowd. An incredible achievement for such a new band, in an impressive venue, not surprising as Nottingham’s scene has been voted the third best in the UK recently.

Spirits were high, and a feeling of pride littered the room. They opened the gig with Silent Fever, one of their newest tracks. It was an invigorating start to the gig.

The boys ended with A Little Bit Of Fear and No Corruption, two of their most recognisable tracks. The middle consisted of old and new, however when we say old, the boys have only been together for two years. From start to finish these guys were lively, stimulating the audience song by song.

It was evident to see on people’s faces at the end that this live show was something quite remarkable. It was as if everyone had turned up to witness something beautiful. And beautiful it was.

Thomas Dandy described the gig as: “Incredible. Its been a seriously amazing night. the atmosphere was electric, and i’m thankful to watch these boys at their best.”

All ten tracks had something different to offer, and you have to admire the powerful yet poetic lyrics that draw you in from Alex, complimenting the genius electronic sounds from Charlie. It’s a brilliant combination that just works, thrown in with a few awkward, yet quirky dance moves that make them even more loveable.

The two tracks that really excited us were Modern Psyche and No Corruption.

You know the first time you discover a new artist and you fall in love with music all over again? Well, that’s what it was like listening to these two particular tracks. We just couldn’t stop tapping our feet and nodding our heads to the dreamy synths that floated across the room.

The boys displayed a cool, fearless stage presence and a passionate, articulate style throughout. As we are continually fed shiny X-Factor clones as ‘pop’ music, there’s unquestionably a gap in the market for something like April Towers, and with the speed that these guys are growing at, expect to see them steamroll through 2016.

Artefact managed to catch up with the boys after the gig and get their views on all things April Towers.

Who are April Towers?

Charlie: April Towers are Alex Noble & Charlie Burley. We met in school in Nottingham (some years ago now…) and instantly disliked each other. It wasn’t until we both discovered our mutual love of The Arctic Monkeys that we actually realised we had quite a lot in common. From here, we formed a guitar band together, which we played in until early 2012. After that had run its course, we had a short break from music before forming April Towers as a duo in Autumn 2013. We wanted this to be an upbeat and exciting project, taking inspiration from the likes of LCD Soundsystem and Hot Chip.

Whats the music scene like in Nottingham at the minute?

Alex: In our opinion, the music scene here is the strongest it has ever been. Creatively it feels like there is so much going on at the moment, and so many artists are doing really great things in the city. The arrival of Rough Trade certainly seems to have confirmed our place as one of the U.K’s blossoming scenes.

What instruments/equipment do you use for live shows?

Charlie: Our live shows consists of Alex & myself, who both play a combination of keys and guitars. We also have a drummer, John, who has been a fantastic addition to the live setup. Our favourite piece of equipment is probably Alex’s Juno-6, which can generate some pretty amazing sounds. I’m still very attached to my Gretsch Duo-Jet, which I’ve had for about 8 years.

Modern Psyche, whats the meaning behind that?

Charlie: Lyrically, Modern Psyche is about the day to day obsession and reliance that society places in technology, and how detrimental it can be to our relationships. The video for the song really reflects this message, and is worth checking out!

What are your biggest influences, music and non music? And are there any bands/artists your excited about at the minute?

Both: Our influences range across a broad spectrum, particularly the likes of Radiohead, Interpol, Jon Hopkins, the aforementioned LCD Soundsystem, and many of the 80s electronic acts like Depeche Mode and New Order. A non musical influence would probably be ale. We love ale. So much so that we had our own ale produced at a local brewery! Acts that we love at the minute… Real Lies, Blossoms and Liss!

What did performing at Rescue Rooms to a sell out audience mean to you, and to Nottingham?

Charlie: On a personal level, selling out a show in your hometown is the holy grail as an artist – especially one the size of Rescue Rooms. For an unsigned act to achieve that was something that definitely raised a few eyebrows, we feel. But again, it’s testament to how strong the scene is here at the moment and how willing people are to go out and watch bands.

What was your favourite part of the experience?

Charlie: It was a pretty surreal day all in all. What people don’t realise is that when you are preparing for a gig as headliner, the day really begins from about 2pm with load in and soundcheck etc. And from here, you are constantly dealing with potential issues, leads not working, sorting our riders for the other bands etc, so it’s actually quite frantic! We only really relaxed the hour before going on stage in our dressing room, which is something we try and do before most shows to calm the nerves. The highlight of the night was undoubtedly finishing the last song, No Corruption, and standing at the front of the stage to the full room in front of us, knowing that we had played our best ever show. Then afterwards, we got very, very drunk.

Alex: 2016 is hopefully going to be a big year for us. We have an EP release planned for the early part of the year, and everything is gearing up towards an album release further down the line. Oh, and lots of live shows!!!