Green Graffiti: How art can promote a more sustainable lifestyle 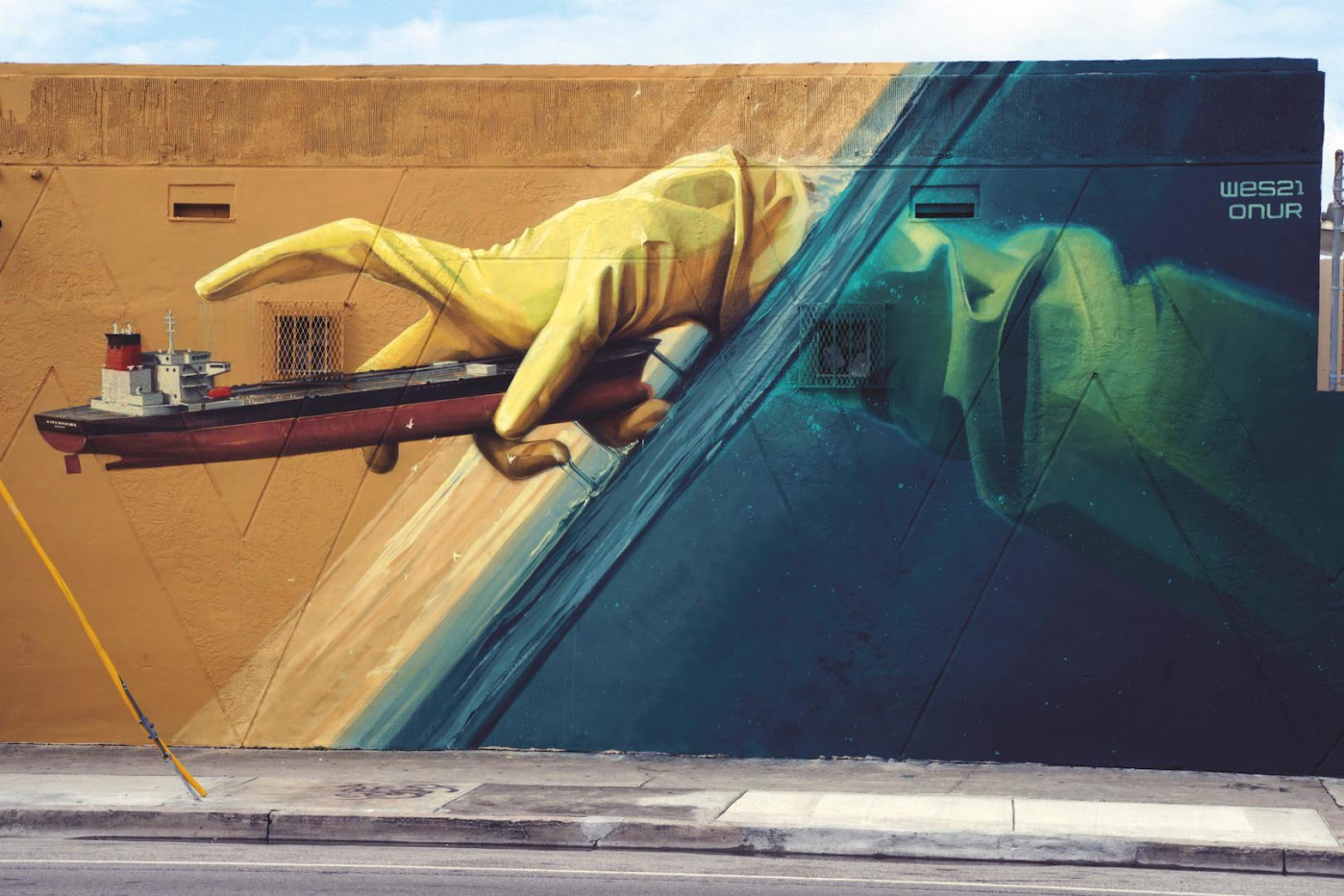 Graffiti and street art are two related art movements of this generation. We associate them with rebellion, illegal activities, underground lifestyles and more recently as an accepted art form whose products are sold at auction houses and commercialised by PR agencies.

Graffiti has its origins in the Bronx of the late 1960s, acting as a form of political and social rebellion that turned into popular art thanks to Jean-Michel Basquiat, Keith Haring and others.

Street Art was also misunderstood as simple vandalism for quite some time — until the first galleries and museums acknowledged it, realising that this art movement will play a role in making art history.

It is a voice of our generation, like every other art movement was a voice and mirror of its time. It reflects on society and our perception of the environment, political affairs and ethical standards.

Graffiti and street art are the most globally operating forms of art we have seen so far: influenced by every culture they visit, graffiti writers and street artists travel the world to paint together and learn from each other.

In this respect, it is the most versatile and global art form that art history has ever seen.

Being an integral part of every culture in every era, art has the power to inspire and to educate individuals and plays an important role in communicating what matters to us now and in the future.

But what does this new art movement have to do with the environment?

One of the biggest problems we have when it comes to protecting our environment is a lack of empathy. In a fast paced world we have to fight to keep up and rush as if on a hamster wheel to function in a fast developing, business-driven world.

It is a new way of survival that expects us to obey and function more than to reflect and think.

Well, if we forget to look around us, we will lose our perspective of the bigger picture and end up being just another slave to the system.

Art can indeed help to bring about change here. Every artist who expresses his thoughts and reflections will have an impact on his audience: it can be a tool to expand your view on the world.

Jacques Cousteau, the oceanographer and filmmaker, once said that people protect what they love and the more we learn and care about our environment, the more we will be willing to actively help.

A very interesting example of how art can influence and change our perception of our planet is a concept that brings together oceanic environmental issues and urban art.

PangeaSeed, a non-profit organisation based in Hawaii, came into being after Founder and Executive Director Tre’ Packard spent some time on the coasts of Asia looking into oceanic environment issues, like the shark fin scandal, before the press picked up on it.

There are as many 100 million sharks killed every year so their fins can be turned into soup. Through his experiences there he realised that if we continue to destroy marine life and pollute the oceans at the speed we are currently operating, we will soon no longer be able to reverse the damage. 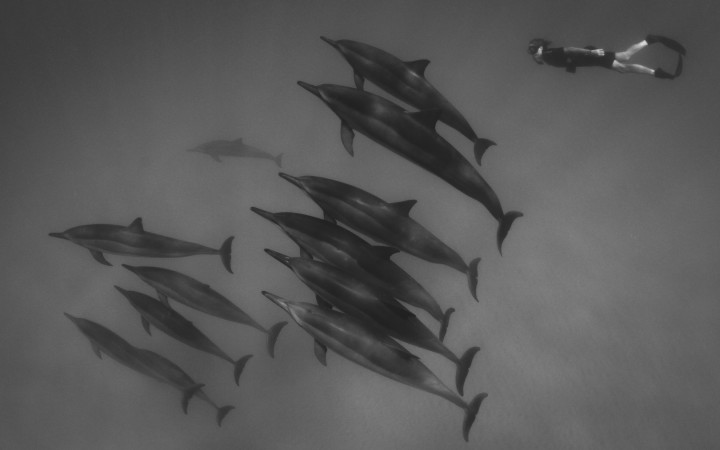 So he decided to establish an organisation that makes people aware of the importance of environmental preservation — on a global scale. This activity, coupled with his passion for urban contemporary art made it an exceptionally innovative project.

PangeaSeed’s aim is to “harness the power of art and its tremendous influence on popular culture to generate awareness, stimulate dialogue, change perception, and inspire positive change around pressing ocean environmental issues”.

One of the main challenges for every organisation that wants to appeal to a broad target group is that everyone relates in different ways.

“In my opinion, art and design are some of the most inspirational and influential ways to educate and promote more sustainable lifestyles across the board”, Tre’ says. He implemented his idea through a project called Sea Walls: Murals for Oceans festival.

Every year, PangeaSeeds’ ARTivists are invited to a different place in the world to experience the local environment and species that PangeaSeed and the local communities are trying to preserve.

As an opening event, these excursions let the participants see first hand what is at stake and let that be a source of inspiration for Sea Walls.

For their most recent project, PangeaSeed created a series of SeaWalls: Murals for Oceans addressing the pressing issue of climate change and its impact on the life support system of our planet, the ocean.

The five large-scale murals were created in the Wynwood District of Miami during Art Basel Miami Beach in December 2015, timed perfectly to coincide with the COP21 Paris Climate Conference.

The list of PangeaSeed’s ARTivists reads itself like a who’s who of some of today’s top creative minds: Alexis Diaz from Puerto Rico, Cryptik from the USA, Faith47 from South Africa, Jaz from Argentina, Meggs from Australia, Nychos from Austria, Onur & Wes21 from Switzerland, Phlegm from the UK, Tristan Eaton from the USA and 300 other artists from across the globe.

They have all committed themselves to transcending cultural and linguistic boundaries to inspire positive global change through their work.

Nychos, an Austrian muralist with roots in graffiti,  is one of those artists who collaborates with PangeaSeed in order to raise awareness.

In 2013 he painted  a life-sized, dissected orca whose intestines were full of plastic, trash, and a rubber duck.

Though his work always has a humorous undertone, Nychos points out important matters we should not ignore – in this case, the consequences of our carelessness towards the health of our oceans and a graphic example of where our litter can end up. 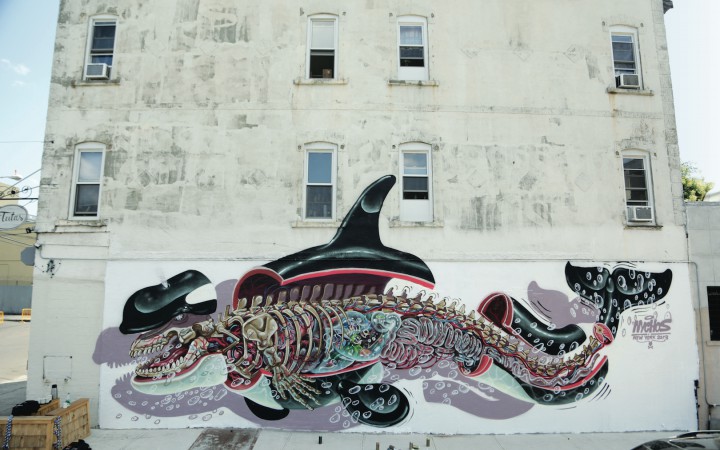 “I love to observe peoples’ first reactions to my works”, he says, “On the one hand, there are those that look away with disgust and on the other hand there are those that laugh at the, in this case, rubber duck. Then they look closer, and start thinking. I’ve had some pretty good conversations whilst finishing the orca, so the mission has been accomplished, I believe!”

That is definitely a win and a perfect example of what art can do to bring people together and make them re-think about what we are doing to our planet with the lifestyles we are living.

The aim should be to get people to empathise, so that they want to know more about how to live a more sustainable life, educate themselves and spread the word.

If we need a friendly reminder of how to do that, this is one of the best ways I can think of. Sometimes, a picture — or a mural — can say a thousand words.

Help PangeaSeed to make a change

If you want to get involved, there are several ways to do so. You can always donate a pound or two through PangeaSeeds’ website — https://www.pangeaseed.foundation.

If you’re feeling generous, you can even adopt a mural! A great concept PangeaSeed came up with lets you donate money for a specific mural (available in three different sizes).

Your donation will be used to make a direct impact by making some place in the world more beautiful and inspiring a whole community to understand the importance of loving our planet which will make people feel responsible for its preservation.

If you’re more of a doer, PangeaSeed offers some pretty spectacular trips you can book to educate yourself as well as others in that matter.

If you can’t give money but are interested in becoming an ARTivist with PangeaSeed, don’t hesitate to drop them a line.