On December 12, 2015, the United Nations 21st Conference of Parties (COP 21), consisting of almost 200 countries, agreed to reduce carbon emissions to a level that will limit global temperatures to two degrees.

Global leaders such as Barack Obama, David Cameron and others praised all the countries involved and believe that the decision made in Paris is a step in the right direction.

As well as the protests in Paris, many people took to the streets in cities all over the world.

London saw more than 2,000 people march just before the conference, some protestors coming from the countries directly affected by climate change.

The BBC’s reports featured a man from Tokelua in New Zealand, an island affected by rising sea levels. Greenpeace supporter and actor Emma Thompson was also there.

Redlines London are an activist group who were thrust into the limelight after using inflatable cobblestones with red lines on them. These lines represent the group’s disagreement with the recent climate change negotiations made in the Paris COP21.

RedLines London member, Dan, who spoke on condition of partial anonymity, said the protest “was completely linked to what was happening in Paris. There were thousands of people protesting in Paris about the climate change conference. What we were doing was joining with their, sort of, hopes and their fight.” 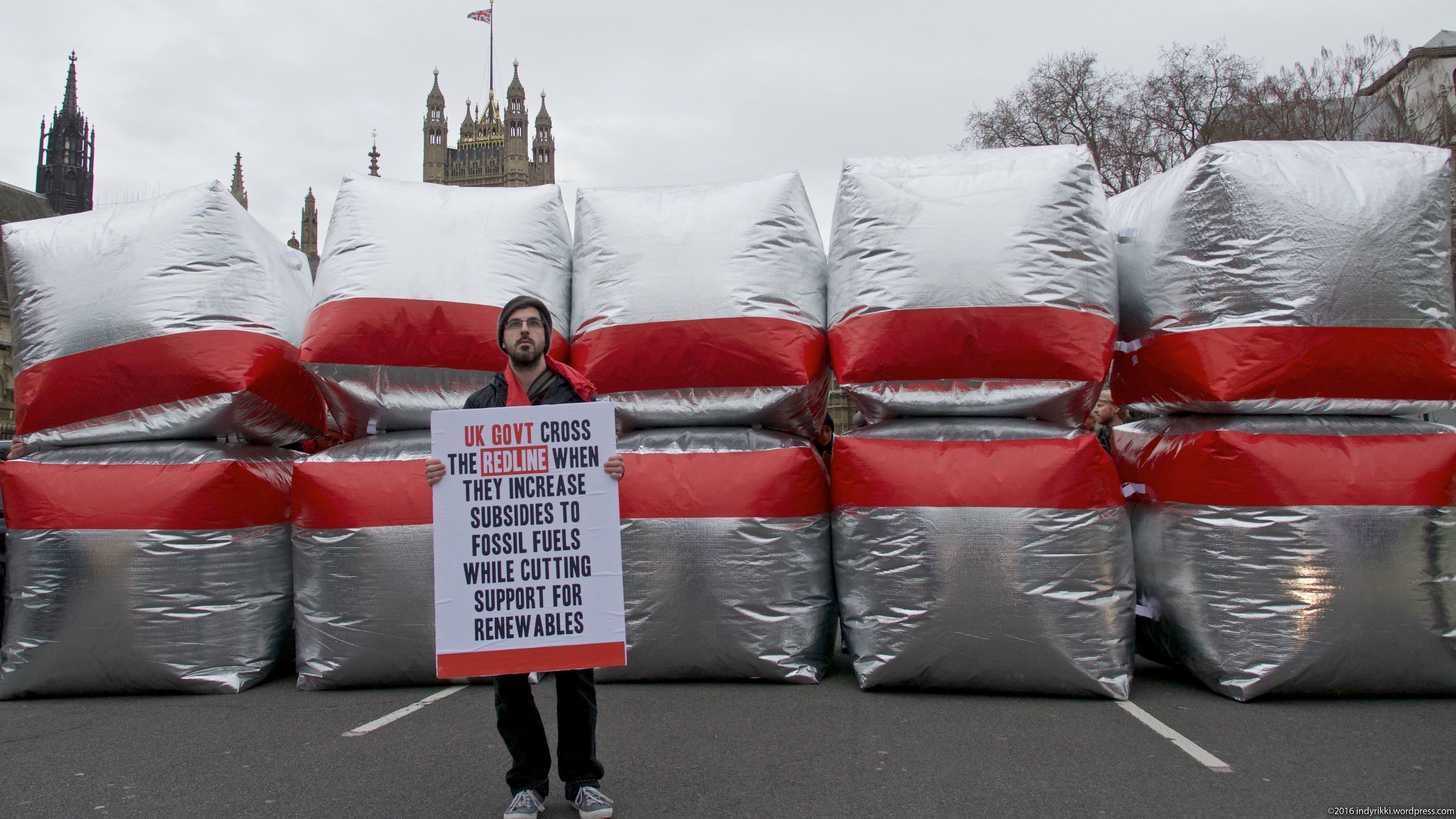 Balen said that “the inflatable barricade with the red line has been designed for the Red Lines are for [not] Crossing Action on the 12th of December 2015 [at the COP21 conference].

“It has now been used in Paris, and there are plans for other cities. Tools for Action is now working on an action in Germany, a mirror-barricade. It will be used as a tool for direct action against Neo-Nazis.”

As a move of solidarity Tools for Actions (TFA) sent the the cobbles to protests around the world – Redlines London was one of them.

TFA says that “a red line is drawn across these inflatable barricades, symbolising the demands drawn up the Coalition 21, a network of 130 civil-society organisations. The red line entails a drastic and immediate reduction of greenhouse emissions.”

Anna told Artefact: “We’re quite rich, so, people who are poor are going to be affected by it [climate change]. So [the cobbles] are symbolic of don’t actually cross the line.”

Other groups such as Liberate Tate (LT), have decided to permanently remind themselves of climate change and its effects.

Members of LT tattooed the exact amount of CO2 emitted into the earth the year each protestor was born.

A recent study, by the Overseas Development Institute (ODI), looked at the correlation between climate change and poverty.

ODI predicts in its flooding hazard index, that in the 2030s the amount of rainfall a day will gradually increase in, vulnerable, places which are close to their respective coastlines. 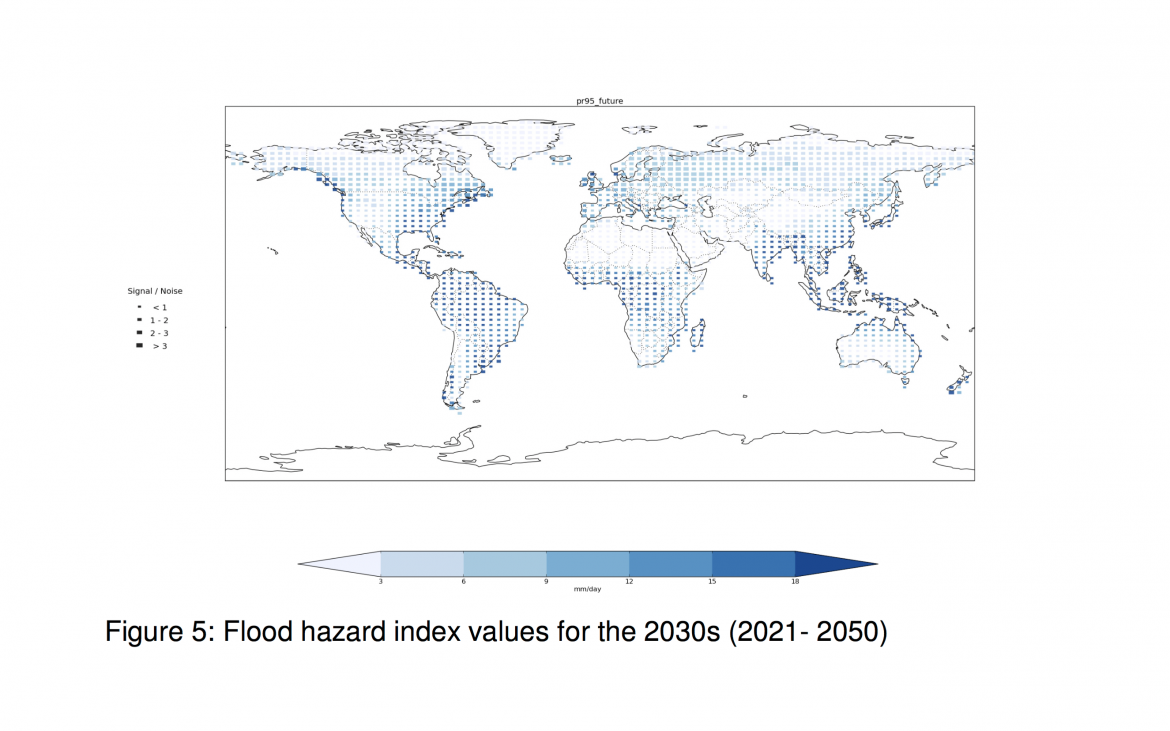 Poverty, Disasters and Climate Extremes in 2030

According to this prediction, the poorest countries in the world are already facing the effects of climate change.

A major example includes the most recent drought in Ethiopia, which is being called the worst ever recorded; it is happening in a country in which livestock is a vital part of the economy – affecting many people’s livelihoods.

The changes in weather have been caused by the latest El Niño currents, which is when the Pacific Ocean warms and the temperature of the water abnormally rises.

This can be a consequence of water temperature fluctuating or because of its relation to the atmosphere. El Niño’s effects can be disruptive – ranging from catastrophic rain storms, to uncharacteristic changes in half of the globes weather.

Anna went on to say, “It’s not just a problem in Paris, it’s a global problem.”

Britain recently saw storms Desmond and Eva flood 16,000 homes across the country. Victims argue that the harsh weather was a direct consequence of climate change. The storms brought more than a month’s rain in a matter of days.

Dan added: “We’ve been talking about climate change for over twenty years and now we’re right up against the limits of what’s possible to avoid – really horrible scenarios.

“The red lines are such a simple visual image that you can put them right next to the shell office like we did and say what you’re doing inside this building is just about to cross a line which is going to mean that we’re going to have our futures destroyed and that poor people around the world are going to die.”