Concert | The Who Hits 50! At Wembley SSE Arena.

The Who at Wembley Stadium could be considered more than just your average gig during ordinary circumstances, much more so with Pete Townshend’s  recent announcement that The Who will be “going their separate ways,” after the end of this, their 50th Anniversary tour. 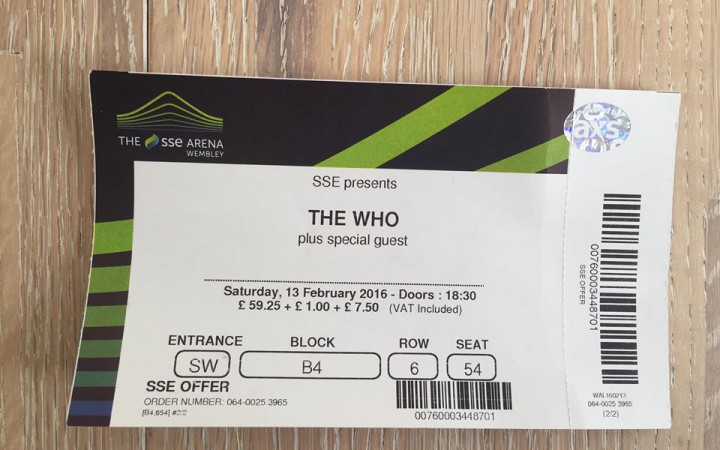 The corridors of the SSE Arena were crammed with greying mods wearing tour t-shirts, including many people from The Who’s last appearance here during the final stop of their “Quadrophenia and More” tour, on July 8, 2013.

Other die-hards went the full hog with classic parka jackets, emblazoned on the back with “WHO” or the iconic circle logo. London and Estuary English were the predominant accents shooting across the hallways although I also heard a few other British accents, alongside a smattering of Europeans.

Support was provided by upcoming singer/songwriter Barnes Courtney, who has also warmed up for Ed Sheeran and The Libertines, and is on an upwards rise since the use of his song “Fire“ in the recent Bradley Cooper movie Burnt.

He has a great voice, singing and playing with heart and conviction. Unfortunately, his songs didn’t grab me by the collar in the same way as his technique and felt slightly dreary within the context of the venue. He might be better suited to somewhere more intimate at this stage in his career.

Finally, the lights dimmed and the immortal words “Keep Calm, Here Comes The Who” faded onto the screen. The crowd, not for the last time that evening, roared a chorus of approval.

The rockers appeared on stage and launched right into “Who Are You?” to the glee of everyone. Afterwards, Roger Daltrey remarked that it was “good to be back”, and you could tell he meant it.

What immediately struck me as they fired through the hits was how good their drummer was. Zak Starkey, son of Beatles Drummer Ringo Starr, was 50 last year, yet maintained the vitality and passion of someone half his age. He delivered an astonishing performance, seemingly unfazed at the end of the set as he walked off with a grin and a wave.

What was also noteworthy was the professionalism of the visuals and lighting. Wembley has been notorious for its poor quality acoustics and, possibly in anticipation of this, the visual elements of the show were pushed to the forefront.

There was plenty of nostalgic mod and 1960’s video, alongside some more psychedelic visuals that teamed well with the spectacular lighting, particularly on the last song, “Baba O’Reilly”.

In contrast to many commercial shows with a younger demographic where the order of the day is frenzied screaming or sexual longing, the atmosphere was significantly different here.

For many, the show seemed like more of a religious experience, fists raised in the air, with many simply nodding and smiling, eyes twinkling in silent reverence.

Seeing a lot of older men, many of whom you can imagine being otherwise quite grumpy old geezers, showing such youthful enthusiasm for something that so obviously, and genuinely, means a lot to them, warmed my heart.

In addition to this, hearing punters conversing outside about when they first and last saw the band with such exuberance also brought a smile to my face.

Pete Townshend may now be 70, but he was as sharp and witty as ever when he bantered with both Daltrey and the crowd.

“I hope I die before I get old; what cunt wrote that,” he remarked after My Generation to howls of laughter before launching into a tirade about being unable to see the set list at his feet, remarking that he needed to lean forwards to see it and being unsure whether he would be able to get back up if he did.

After a runner brought on another piece of paper, he remarked that they’d made the writing a bit bigger, which made both him and the audience smirk.

Despite this, Townshend strutted around the stage with aplomb, frequently employing his signature “windmill” technique with vigour, alongside Daltrey’s iconic microphone swing.

Throughout the night he paid tribute to his former bandmates, dedicating The Kids Are Alright to Keith Moon, who he remarked “lived about 500 yards down the road from here”, with a show reel at the start of the show to commemorate both Moon and John Entwhistle.

I found it strange that Daltrey, whilst still in command of such a tremendous voice, visibly struggled towards the end of the show, seemingly slightly dazed, despite physically looking in much better shape than Townshend.

Daltrey then reminded the audience that he had contracted viral meningitis last year, forcing the band to postpone the US dates of their farewell tour.

They now begin on February 27 in Detroit, playing 27 dates over three months before finishing aptly in Las Vegas on May 29, at the aptly named Home of the Greatest Entertainers in the World, The Colosseum at Caesars Palace.

After a blinding performance of Baba O’Reilly to finish, with the iconic scream being the only time during the show where I felt my eardrums under serious physical pressure, Daltrey thanked the audience for their support during his illness, remarking that he wouldn’t of got through it without everyone.

This felt bittersweet due to its timeliness. Whilst he was up there performing his heart out, the deaths of many of Daltrey’s luminaries these past few months in Bowie, Lemmy and Glenn Frey can’t help but leave you feeling concerned.

Daltrey didn’t live the rock and roll lifestyle, having never knowingly taken hard drugs. It’s a testament to much of life being luck of the draw when you look at him and Townshend side by side up there.

While this year may be their curtain call as a live band, holding the widely feted crown of best live band of all time isn’t a bad legacy to look back on.

The Who works live, whether that’s at Leeds in 1970 or Wembley in 2016, because the tunes are undeniable. Anthemic rock tailor made for stadiums, bursting with anger and angst, yet possessing a life affirming quality, with themes that resonate for every generation. The old boys are alright.