Normally New Year’s resolutions about losing weight and cutting out cigarettes are short-lived and not frequent topics of conversation.

This year though was different – all we heard about was people going on about Dry January.

It’s a simple concept: you don’t drinking any alcohol for the month of January – people claim to do it for many reasons, these include: health, saving financially and even for charitable reasons, or simply a way to challenge them, trying something they may have never thought they would.

Alcohol is a big part of peoples’ lives, even those who are not heavy drinkers, but who can resist a drink on a Friday or a Saturday night after a hard week at work?

Jessie is a good example – she had the right idea when it came to Dry January: “I was not really a heavy drinker before, well at least I did not think I was but by doing what I did, I realised how much I was actually spending!”

Jessie did it for purely financial reasons: “I wanted to add a bit of an element of fun to it, for myself at least. When I’d go out with my friends on weekends and weekdays, I’d put the amount I would spend on drinks in a separate jar at home and wanted to see how much I would actually save.”

She ended up saving almost £200 which she donated to her local children’s hospice: “I thought it would be a good idea to contribute to something as I probably would have spent that on alcohol in the month of February anyway! It’s a good challenge for anyone doing it and because I had that extra twist, it did give it a bit of an edge so it wasn’t just the Dry January everyone was doing.”

There was a common theme when speaking to most people who took part: their aim was to save money – some believe it’s hard to imagine how much you spend on alcohol until you undertake something like this and see how much you save.

Especially living in London, where alcohol is not the cheapest.

Jazz, who lives in the capital and is currently studying for a masters degree, said she decided to take part in dry January because she fancied a challenge.

She told Artefact: “I drank a lot over Christmas and New Year so I felt as though it was a good opportunity to detox and of course, challenge myself! I wouldn’t say I was ever a big drinker but more of a social drinker.” 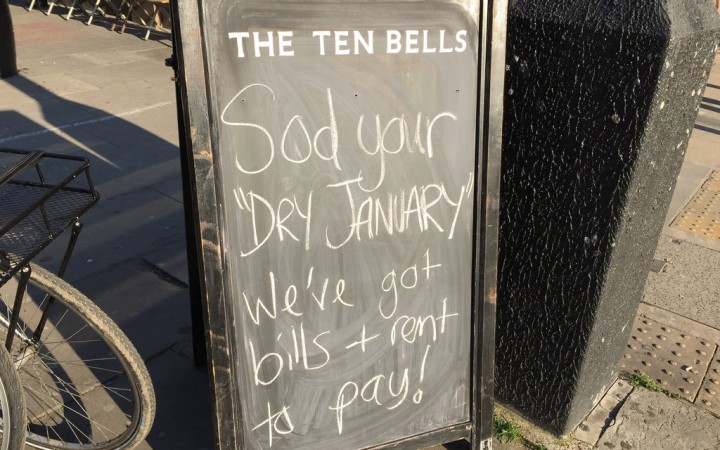 Not everyone was impressed with Dry January [Matt Brown]

The biggest challenge people faced was staying away from the drink on weekends, especially when going out.

“Not drinking on weekdays proved easier than I thought, obviously the main challenge was on weekends, when we all go out and I have to be the one to say ‘Oh can I have a coke please?’ It was strangely pleasing!” Jazz told us.

Jay, who is a student and works part time on weekends explained how he would have to tell people he was taking part in dry January every time he ordered himself a drink.

“I wouldn’t say it was embarrassing but it was definitely strange when all of your mates go full on and ask for double shots and the barmaid looks at you as if you are crazy. I would always say ‘Dry January’ just to make myself seem a bit more normal.”

Although most people found it difficult, Matt, who is currently studying but works in a bar most weekday evenings and weekends, definitely had the toughest time of it.

He told us: “When I first told everyone at work I was taking part in Dry January, they all laughed. I don’t think anyone expected me to come through with it which is what made me even more determined”.

However he said it was easier than expected because the bar staff are not actually allowed to drink on the job: “At first I thought I was trying to do something which is clearly impossible but in fact, we’re not even allowed to drink at work.

“Usually we tend to drink towards the end of the night and when everyone leaves but nevertheless, we aren’t even supposed to then. It is definitely something I am proud of, as silly as that sounds. I don’t think I will be doing it any time soon though,” he continued.

“For me, it was never about saving money as at work, drink is free anyway, which makes it an even harder challenge! It was just about challenging myself and seeing if I could come through with something that many would have thought would be impossible, especially my work colleagues.”

Plenty of people who take part in Dry January, do so for charitable reasons. Dry January have their own website where they run schemes for those who are willing to donate.

The funds they raise go to a charity called Alcohol Concern, which is the leading national charity dedicated to those with drinking problems.

They released a number of statistics in relation to this year’s Dry January, confirming that one in six people in Britain attempted Dry January this year and 71% succeeded in going 31 days with no alcohol.