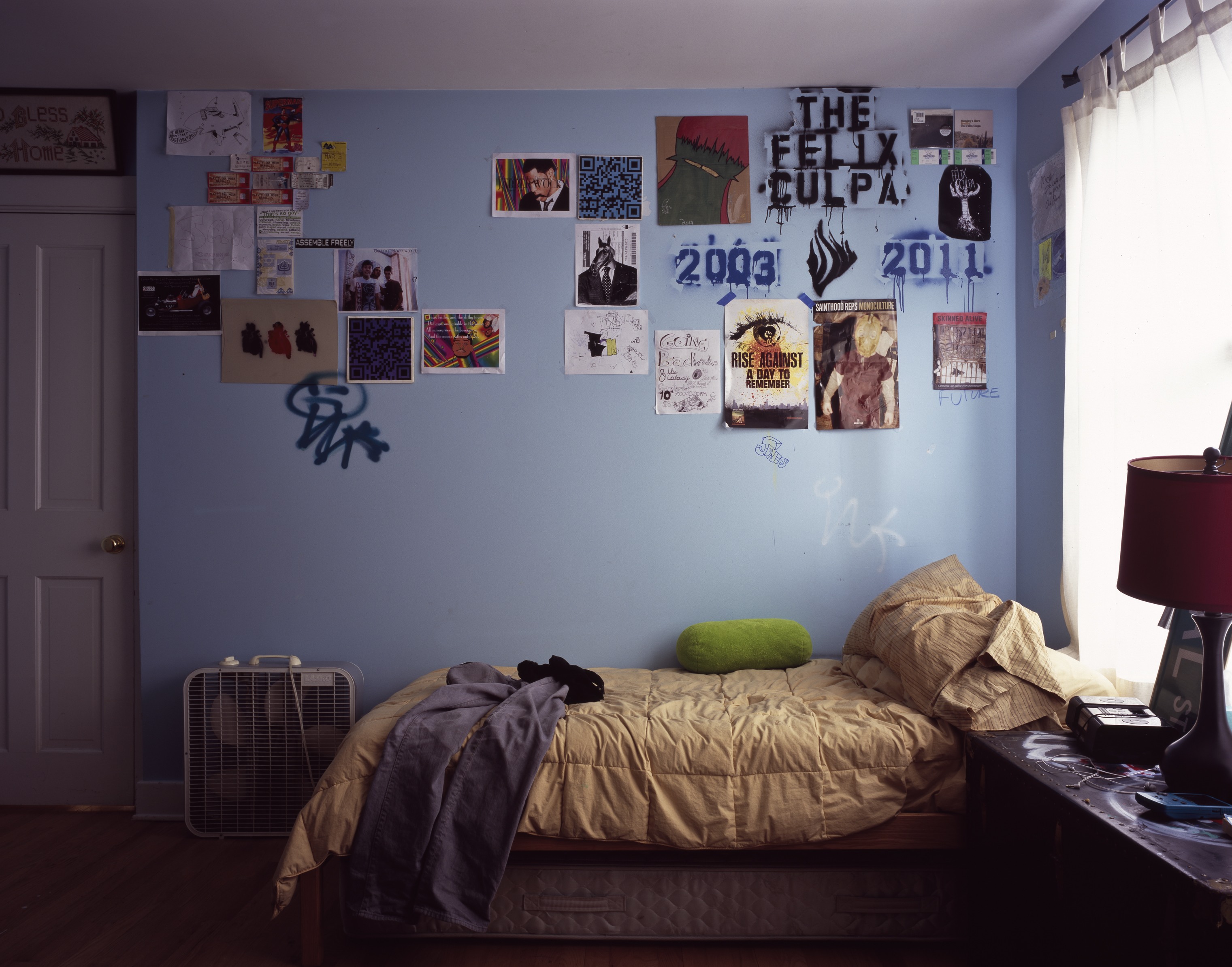 Photographer Daniel Carlson has published a mesmerising photo-series capturing the bedrooms of teenagers. The photography is transfixing, with each beautifully crafted image telling its own unique story about its subject.

Originally, Daniel was inspired by the way we change our homes to reflect an ideal version of ourselves for guests. He wanted to look behind this veneer and photograph how our homes look when we live in them, to “show the dirty dishes, the stacks of newspapers and the laundry on the floor”. But as he explored this idea, it quickly became apparent that people weren’t actually willing to show this intimate side of their private lives, saying “They all seemed to get a bit skittish about it”

But it was when he visited an old friend, the mother of three teenagers Daniel was “immediately struck by how much their rooms revealed about each of them, about these spaces seemed to served as a creative expression of the people who lived in them”.

Daniel travelled around the US and Canada, as well as visiting Sweden and Holland to curate his collection of images. He told us; “initially it was just a matter of taking advantage of being in a place – for whatever reason – and putting word about out the project. But as it grew in scope, it became clear to me that this was a project worth traveling for.”

Whilst these teenagers are living thousands of miles apart, Daniel told us how he didn’t notice any dramatic differences country to country, instead, he told us “most of the variation has had to do with urban vs. suburban… kids living in places like Brooklyn have small rooms that are packed with things [whereas] the rooms of kids in suburban Stockholm tend to be a bit larger and more minimal.”

In cities such as Chicago and Brooklyn where space is less of a commodity peoples homes are a reflection of their struggle for size. He told us; “my sense was that families living in densely packed cities tend to be more possessive of their space… those rooms reflect that.”

To shoot the images, Daniel uses large format film and relies solely on natural light to capture the true essence of a room. Given the diverse range of spaces he was shooting in paired with the confines of shooting on large format film, challenges were unavoidable.

He told us “some of the rooms – again, the ones in urban areas in particular – are small and that presents a logistical problem when it comes to making the pictures. That said, it’s forced/allowed me to make pictures that I wouldn’t ordinarily have made. A good example of this would be the photograph of Isabel’s room. It was a tight space with a loft bed and no real space for me to get an overview of the room. But that constraint dictated a different kind of composition – one that really focused on a few details of her room – and viewers seem to really connect with it.”

“The other challenge involves light. I don’t bring any light sources or modifiers with me, so I’m always working around the light. I guess the other wrinkle is that I shoot these on large format film (the very old-fashioned kind of camera that involves a cape over the head) and that means a bit more gear than if I were shooting with a digital camera. And it’s a much slower process.”

There is a strikingly clear difference, visible in the photographs, that the space occupied by a teenager is entirely different to that of an adult. “Adults have learnt how to curate and control the image they project of themselves. So while we are happy to share many things with others about who we are, we’re also very adept at hiding other aspects of who we are.”

Teenagers however, display their private selves in a very different way, with Daniel telling us “they’re not afraid to make statements about what they’re into and I think that’s a great thing, something we can all learn from. Teenagers – whilst being extremely skilled at hiding things as well – are far more revealing when it comes to their living spaces.”

The images capture a moment in their subjects lives that is detrimental, yet so often forgotten. To have a memory such as this for many, could hold immense sentimental value later on in life.

Daniel went on to tell us “one thing that struck me early on about these images was that they really celebrate their subjects… this project is about honoring that time, about making a permanent image of a very important moment… Maybe they’ll even learn something from it.”

Daniel plans to continue the series and it has an indefinite longevity about it. The murky age between childhood and adulthood is a time of learning who you are. The objects we see displayed so proudly in the bedrooms of the teenagers are key aspects of their characters that more often than not will shape the people they become.

He goes on to tell us; “I’m interested in is how this work [will] look over time, especially how images taken in 2011 (when the series started) look against images that I take in 2025. I wonder what that juxtaposition will reveal.”

The images are beautifully crafted, there is something strange about being given an insight into a space that is so deeply personal. However, it forges a connection between the reader and the subject, a powerful theme that Daniel has carried over again into the photo-series ‘creatives’ – photographing creative minds in their own spaces.

He told us; “shooting artists and creative people in their work spaces is the best way to get them to be at ease, to feel comfortable.What I like about those sessions is that they usually take quite a bit of time.” The length of time spent with the subjects is unlike the teenagers series, where the effects and lights are stripped back to zero.

This more lengthy process forges a bond between the people behind and in front of the lens, something that is clear when looking through the photos. He told us “it’s a very different dynamic… for me, the process of using a large format camera turns the session into something much more like a performance on the part of the subject: we talk, we set up, we test a few things out, and – finally – we take a picture or two.”

We asked Daniel what he believes is the key to creating and excelling as a photographer, he told us “shooting all the time is the most important thing. But I think it’s just as important to spend time editing and evaluating one’s own work.”

He believes that constantly developing and learning from yourself is the best way to succeed, telling us “creating projects is the best way to ensure that that happens. One of the most amazing things about the internet is that it allows artists put work out there: conceiving, shooting, and editing work into a whole and getting it into the world… Making and completing work… is really the key to becoming someone who evolves as an artist.”