Hall by the Wall

It was in the late summer of 1976 when David Bowie arrived in Berlin to recover from his drug addiction and settle his mind over his divorce from Angie Bowie.

She tried to visit him a few times, but according to witnesses over the phone, he was trying to persuade her not to saying that she wouldn’t like it because “the wall is around the corner”.

After shooting the movie The Man Who Fell To Earth he decided to create his own version of the soundtrack which he started recording in Château de Rouville.

When he found out that a guy from his staff was working for a magazine, he decided to relocate and finish the album Low in the heart of Cold War Berlin.

He was a particularly familiar with the music of pioneering German electronic bands Kraftwerk and Tangerine Dream and it was Edgar Froese of Tangerine Dream who gave him the idea to record in the newly-opened Hansa studios, which stood only 200m from the Wall.

Located in a 1912 office building near Potszdamer Platz, the studio was established in 1972.

The record label “Hansa” was created in 1962 by brothers Peter and Thomas Meisel and moved to various locations in West Berlin until it settled in the current address at Köthener Straße No. 38.

Famous for its Meistersaal recording hall, the studio  was a melting pot for concerts and parties in the swinging 1920s.

The unique acoustics of the place was ideal for classic concerts; its proximity to the Berlin wall and the absence of any other buildings of the time gave it a unique sound and separation from the rest of West Berlin.

Thanks to Thilo Schmied and Berlin Music Tours Artefact was given the opportunity to become part of the atmosphere of Hansa studios. 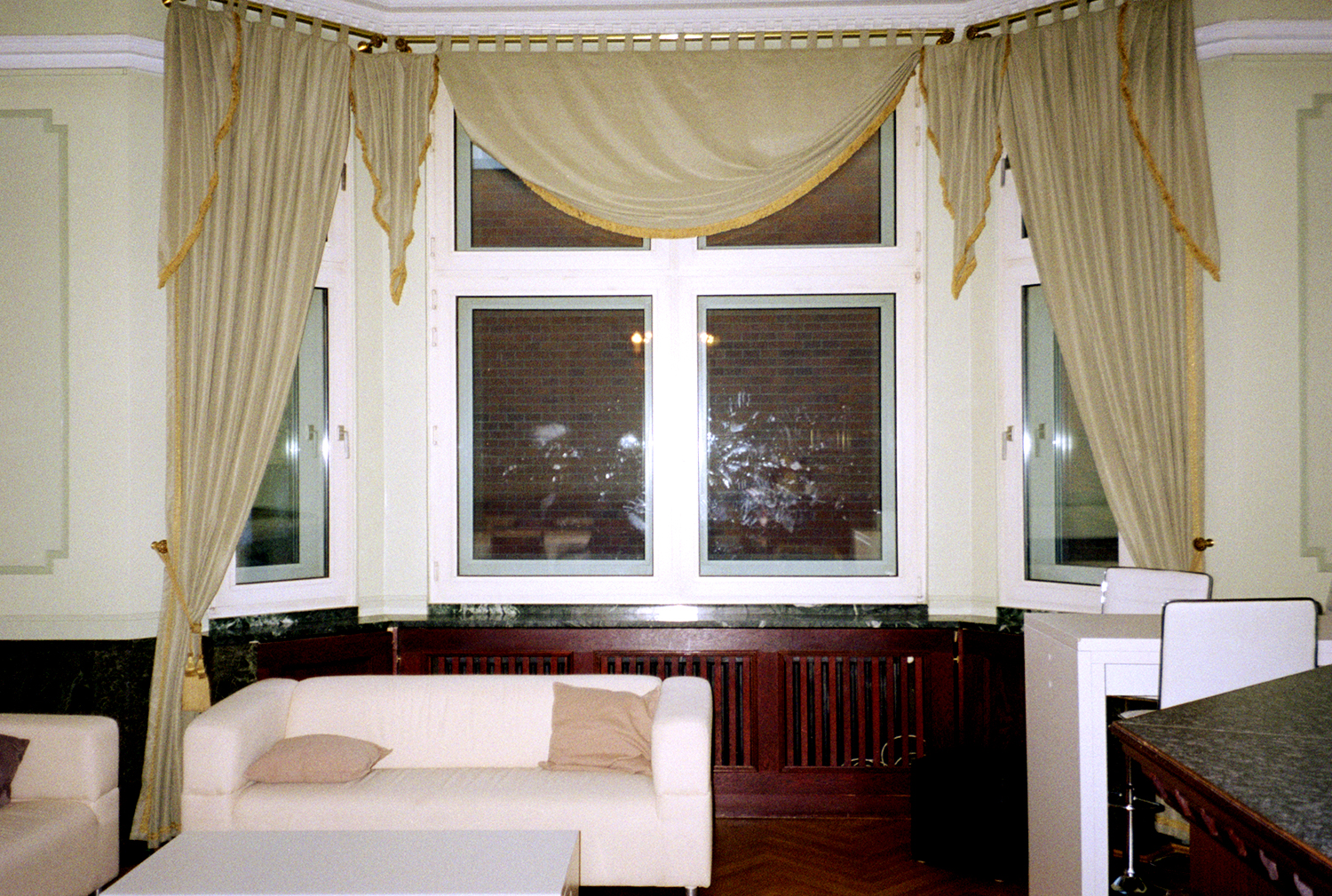 The window where Bowie’s lyrics for Heroes was inspired: “I can remember standing, by the wall” [Gergana Petrova]

We also spoke with David Bowie’s sound engineer, Eduard Meyer, who would help him finish Low in 1976 and create the follow-up Heroes.

Meyer recalled Bowie’s first reaction when he first entered the Meistersaal: “Wow, what a fantastic room!”

Eduard Meyer also worked on Iggy Pop’s  most iconic albums Lust For Life and The Idiot; his previous collaboration was with Kraftwerk in Koneberg Studio in 1972 which happened to be another music melting pot at the time. 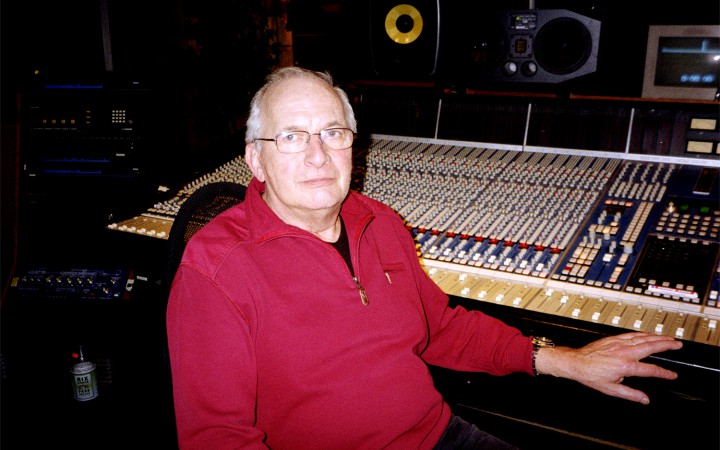 “He used the technique which he had learned from Brian Eno to count on the tape, from 1 to 180 about 4-5 minutes to have the same frame for every song.” This was very innovative approach and he was one of the first musicians to embed it in his record.

“Until then he had no idea how to work with it but he tried a marimba phone in the studio and started to play on it – you could easily hear it playing through his songs.”

One of the strongest influences on Bowie’s work at the time was Iggy Pop who was constantly around.

When asked what kind of influence the two had on each others music, Meyer said he tried to answer this precisely but he thinks they both gave each other some help to get away from the situation they had before in Los Angeles: “To get rid of all kinds of drugs and things and, to live in a way that they could build up their bodies and brains; they influenced each other from one side to the other.”

The two were living together with Coco Schwab (Bowie’s PA) and Esther Friedman (Iggy’s girlfriend) – their flat was at Haupstraße 155 and it had seven rooms.

Meyer recalled spending one Christmas with them: “There were empty rooms except for one room with a sideboard and stereo equipment to listen to music. And the rest were empty rooms with mattresses and cushions for visitors.” 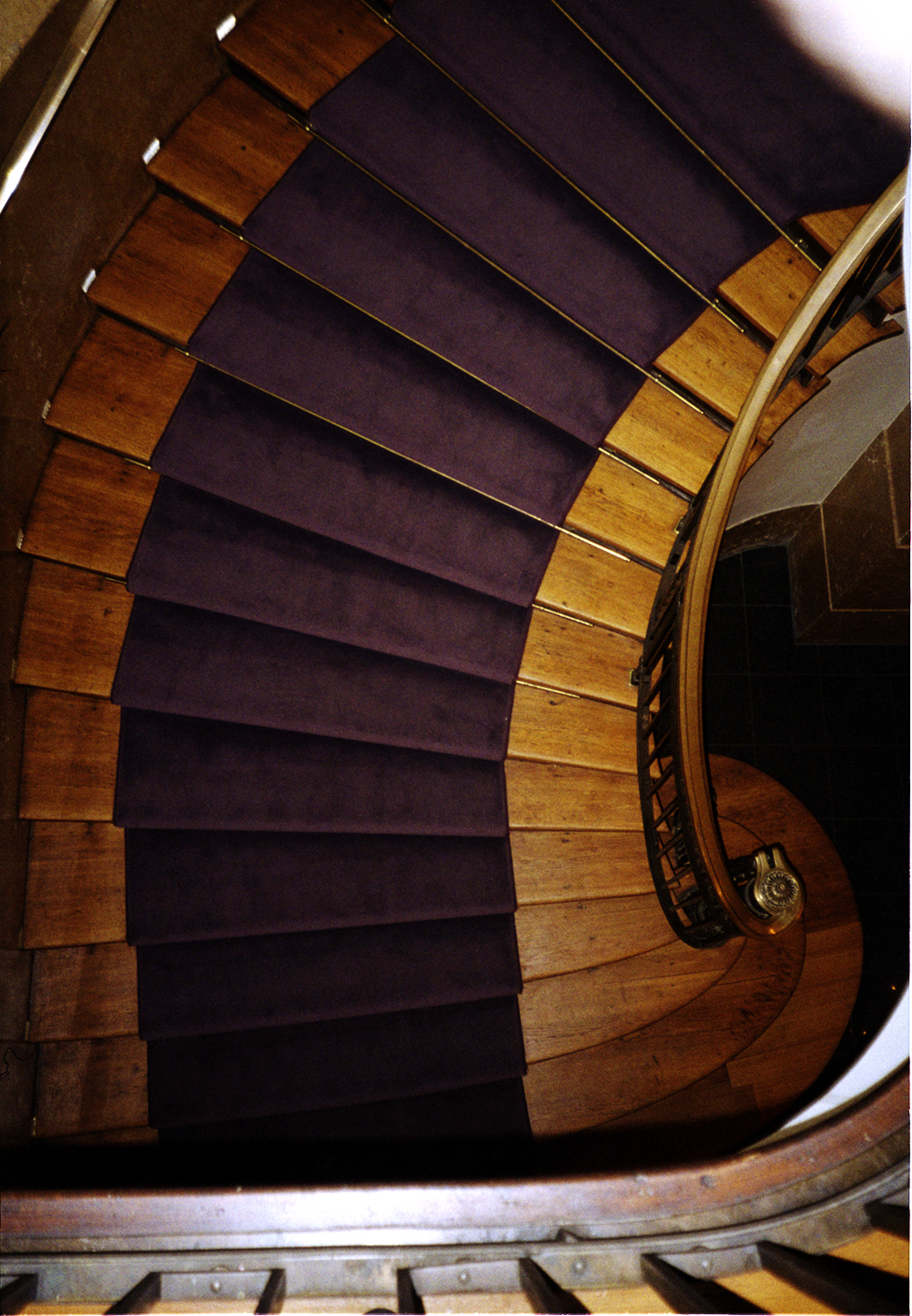 Some people have suggested that Bowie was treating Iggy like a dog, but Meyer doesn’t recall this: “No no”, he said. “I have not had the impression of this kind, thought he was sometimes told to be quiet, David to Iggy, because some little times of David suppressing him, calming him down.”

He recalled a memory when Iggy Pop had to move out of the flat: “Finally, I haven’t seen it but I was told that he has eaten all his food from the fridge, and David said, ‘Hey you shouldn’t empty my fridge’. There was a little apartment at the back of his, so Iggy had to move into the backyard of this building,” Meyer recalled.

“And when he came to my apartment I think they spent the night with each other. They did tours to Berlin, to Tiergarten, they went to the Wannsee (a public beach in Berlin). They did many things together.”

Speaking of drinks, he mentioned that Bowie’s favourite drink was beer, which he drank from the bottle.

As a result, Bowie recorded one verse of Heroes in German, which was translated by his backing vocalist, Antonia. He said that she “had hard times to translate because he couldn’t pronounce German well.”

Bowie’s working rhythm was uncompromising. Meyer said “he was writing lyrics all the time. When I saw him he was writing something, a lyric, a book.”

They had a good working relationship and became friends, as well with Tony Visconti, David Bowie’s long-term producer who also worked on his last album, Blackstar. “We’re colleagues, we’ve got the same ideas how to work.with each other.”

Meyer told Artefact about the story behind one of the verses in Heroes: the lyrics are referring to a couple “kissing by the wall” and Visconti who was married to Mary Hopkin at the time, had an affair with the backing vocalist, Antonia Mars.

“I think David had seen him out of the control room, but you wouldn’t recognize them from this distance.” The other theory about the verse is that Bowie got inspired by his frequent visits to the Brücke Museum of German Expressionism.

In 1978 Bowie had finished recording his last album of the trilogy, Lodger, and left Berlin.

However, a new decade of music and political change was about to come – bands like Depeche Mode, Sinéad O’Connor and Siouxie and the Banshees, U2, R.E.M. and Nina Hagen (one of the few East Berlin artists allowed to go to the West) would create some of their most emblematic songs in this small studio.

Mike Clowes worked in Hansa with a band called Friction Groove which was signed to Atlantic. He co-wrote, recorded and co-produced Sinéad O’Connor’s first album, Lion and the Cobra, which was recorded in various London studios.

He told Artefact about working in 1980s Berlin and why Hansa was particularly attractive for musicians as there were cost/tax benefits in recording outside the UK, and so many British albums were recorded in Berlin, Brussels, South of France, even the Caribbean.

He also mentioned the “reception and aura” of Hansa, which left Bowie in awe in when he first saw the Meistersaal. 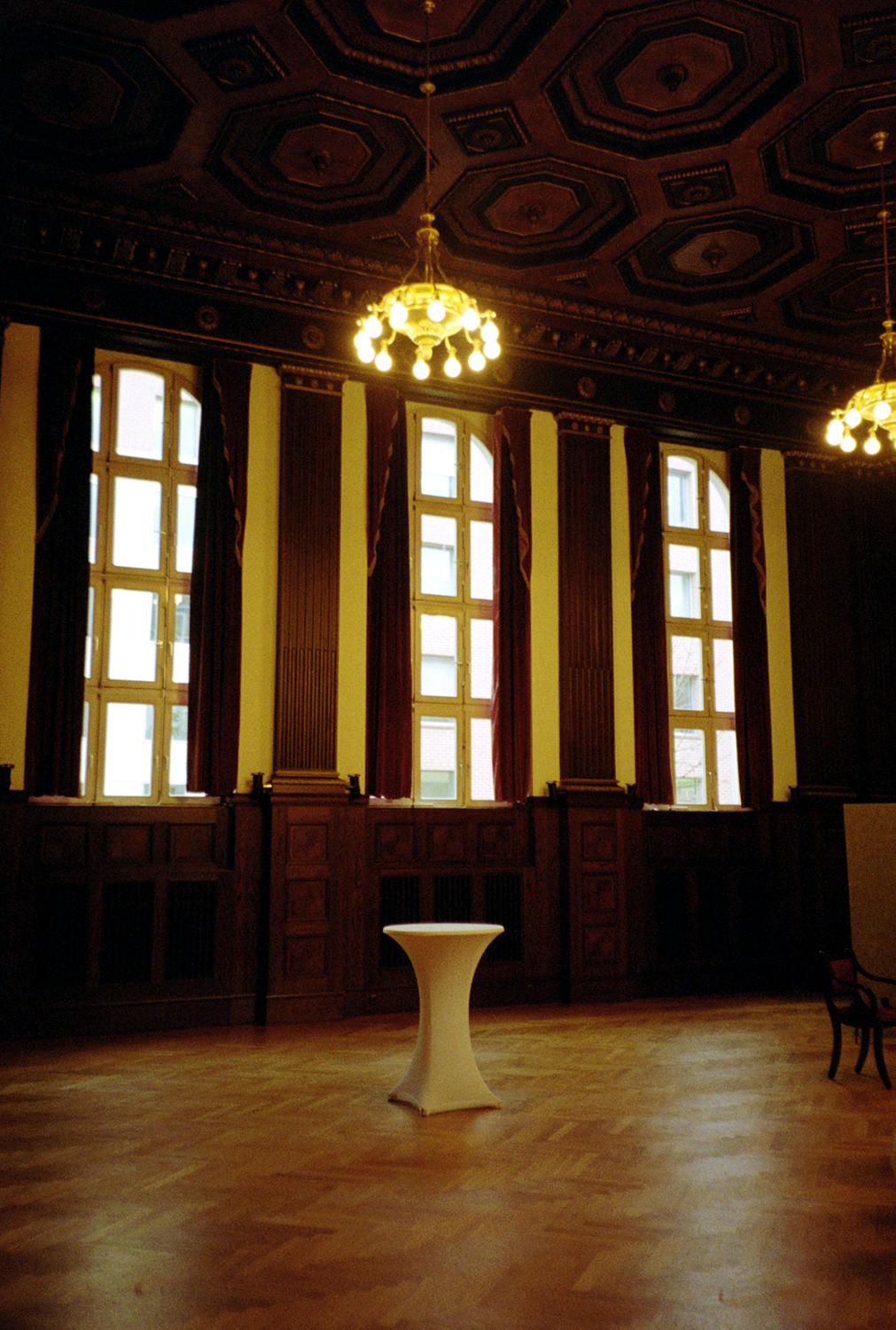 The Meistersaal, where David Bowie’s “Heroes” was recorded

“Hansa developed a very cool reputation. It was 100m from the [Berlin] Wall before it came down so the whole experience was shaped by the Cold War backdrop.”

He believed that Berlin was “an extraordinary city” because the population in West Berlin was largely young or very old.

“It was a pretty wild place and people would do all-nighters every night and go to work from the clubs.”

Even today Berlin is still famed for it’s Bergheim and underground clubbing scene.

What happened in the 1980s was long before the rave and other “all-night party behaviour” had developed in UK, so it was a cool, striking and fun post-war city with super heightened political tension.

Overall, Hansa had a growing romantic reputation which later attracted Nick Cave and the Bad Seeds and Killing Joke who were recording there at the same time with Groove Friction. Clowes recalled that Jaz Coleman, Killing Joke’s leading vocalist used to spend a lot of time at the opera. 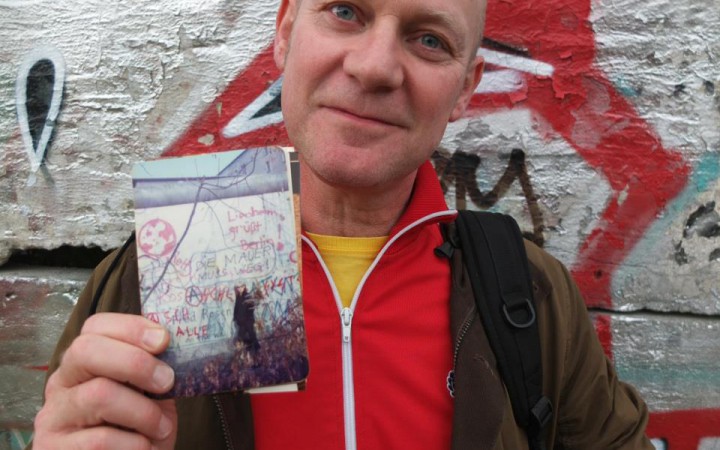 Mike Clowes showing a picture of singer Alison from Friction Groove, on the 200m walk along the Berlin Wall from their hotel to studio [Mike Clowes]

Clowes also remembered that during the 1980s the studio wasn’t that technical.”The amazing feature of Hansa was the concert hall on the ground floor which was set up as an Abbey Road-like live recording chamber. The natural drum sound was awesome!

“The atmosphere was great for a band to record in live setting. It also happened to have a very good bar/restaurant which was also open to the public and was a very cool place”.

Nick Cave and his young producer Flood, were particularly inspired by the “grungy atmosphere”, while Irish band U2 made one of their most successful records in Hansa, the album Achtung Baby! which was released in November 1991.

The band started recording there almost a year after the fall of the Berlin Wall; their flight was on the last plane into the official “East Berlin”, right before German reunification, and they marked the German influence on their album by making a documentary about their Berlin days, called From the Sky Down.

British band New Order recently released the video for their new single, Singularity which is an illustration of the music scene in West Berlin in the 1980s.

The documentary footage features extracts from the movie B-side: Lust & Sound in West-Berlin where Nick Cave talks about his life as a squatter and how he stared the band The Bad Seeds.

Whether it’s political instability, stagnation or raving youth culture, Berlin and Hansa studios have preserved unprecedented feeling of creative tension which continues to attract and inspire musicians from across the globe.

For more than four decades this has become a symbol of isolation, rebellion and unique atmosphere.

Berlin Music Tours are taking place daily and can be booked here.