Review | Diiv: Is The Is Are 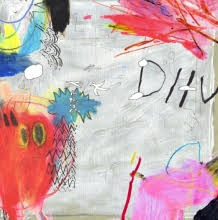 As documents of struggle go, Zachary Cole’s deep dip into drug addiction is sifted into dreamy tales with hazed guitars; matching his head space and soundtracking his recovery.

Released by the label Captured Tracks, Is The Is Are is the follow-up to Diiv’s debut 2012 release Oshin – over one hour and 17 songs sees this double album progress through the contextual complexities of Cole’s four year gap.

Themes of falling in love, and falling out of reality run through the album with high points Out Of Mind and lows with emotive Healthy Moon spiraling from the all too familiar guitar driven noise too melodic piano notes.

The self-driven nature of this album acts as an accomplishment, despite the borrowing techniques that proceed from Oshin tracks like Valentine display a point of preciseness with flickering romantised riffs.

In a recent interview with Pitchfork, Cole stated “We’re trying to extend the life of guitar music”. This double LP gives notions of inspiration from grunge legends with the hope of reigniting the instrument that seems slightly less prominent in the new age of electronica.

Moves towards a sonic reinvention seems hopeful alongside this dreamy yet chaotic in context record; drift away to the soundtrack of the euphoric and tormented times of Zachary Cole.