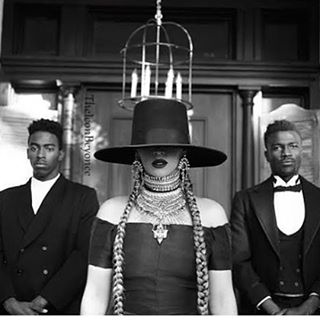 When Beyoncé released her new song Formation, the uproar caused by certain aspects of the music video had social media in a frenzy.

Following the song’s release, Beyoncé performed at the Super Bowl, creating even more publicity; the performance was widely reported on American news platforms such as CNN and Fox News.

The edgy song in which Beyoncé proudly exclaims her black heritage was not only praised by fans all over the world, but it also managed to offend people too.

After the Super Bowl performance on Sunday, February 7, Beyoncé’s choice of outfit caused news anchor Tomi Lahren to criticise her on the online show The Blaze.

Beyoncé’s outfit was inspired by the Black Panthers, who were a militant party founded in 1966, aimed at promoting self-defence against the police, and formed specifically to liberate black people.

Beyoncé’s backing dancers were in a Black Panthers-style black beret and a leather two piece, and the performance was heavily influenced by the Black Lives Matters movement, paying tribute to historical figures such as Malcom X and Martin Luther King Jr.

Tomi Lahren, who has previously caused controversy by her rants against President Obama, believed Beyoncé is using her ‘fame and entertainment value’ to ‘advance the notion that black lives matter more’.

Lahren went on to attack the singer’s husband, rapper Jay Z, calling him out for being an alleged former drug dealer, she exclaimed: “Talk about protecting black neighbourhoods, start at home.”

Appearing to be offended by the performance at the Super Bowl, Lahren also noted that white people look up to Beyoncé as well.

After her rant was released, Lahren received a backlash from Twitter users.

Twitter user Jessi tweeted: “@TomiLahren It means Black Lives Matter TOO. The same way if we did a song celebrating WOMEN or fight for women, we aren’t against men.

“Sometimes it’s really discouraging. When you hear people like you who are so self obsessed and racist that they can’t think”.

Another Twitter user Damien said: “Where was the race divide? What lyrics were anti-white? You just don’t like [black] empowerment and don’t understand struggle”.

Another tweeter, Cain Lawson, also said: “Let me guess… the truth is you are uncomfortable with the fact that black Americans actually love themselves & are showing it”.

Following this incident, Lahren later went on to have a heated debate with American radio show host, Charlamagne Tha God.

Receiving over 300,000 views, the video posted on TheBlaze.com shows Charlamagne and Lahren fighting to get their points across.

Laren exclaimed: “When you go to the Super Bowl and you’re celebrating a day where everyone comes together, you don’t stand up and salute a terrorist organisation like The Black Panthers that committed acts of violence!”

Their discussion got even more heated when Charlamagne referred back to Lahren comparing the Black Panthers to the KKK.

Twitter user Neno Valdano, along with many others, seemed shocked at this comparison.

Despite the backlash following Beyoncé’s Super Bowl performance, she has certainly made an impact.

SNL have used the fact that the star is being “unapologetically black” in her music video to make fun of the controversy around it.

The three-minute skit includes shocked white people finding out Beyoncé is ‘black’, and once finding this out, it is as if the world was ending.

One man stands up and says: “Maybe the song isn’t for us”, to which a white woman screams: “But usually everything is!”

The video also humorously highlights certain stereotypes as well such as the “hood black man”.

Despite all of the negative coverage from Beyoncé’s new video and performance at the Super Bowl, there remains the underlying message and why it was made.

The music video represents black women being empowered; about them being proud to be black.

Although some lyrics in the song Formation are questionable, it is obvious Beyoncé wants black women to feel at one with their heritage.

“I like my baby heir with baby hair and afros, I like my negro nose with Jackson Five nostrils. Earned all this money but they’ll never take the country out me”.

According to BuzzFeed: “A planned protest following Beyoncé’s Super Bowl halftime show turned into a pro-Beyoncé protest after planned demonstrators never showed up to protest.”

It was thought that only three people turned up to protest but were left red faced as many Beyoncé supporters showed up instead to defend her song and halftime performance.

Following Beyoncé’s Formation Tour announcement, according to CNN, police in a number of different states in the US have called a ‘boycott’ in which they are refusing to provide paid off-duty security for the events.

Sergeant Ed Mullins, who is the president of the Sergeants Benevolent Association in New York City told CNN: “To taint police officers globally in the Super Bowl is really wrong”

Mullins also said: “Even though ‘she is in a major position to do things that are positive’ she is pitting herself against law enforcement.”

Fans on social media felt offended over this police ‘boycott’; one Twitter user, Cheyenne, expressed her disbelief in her tweet which has been retweeted over 2800 times. 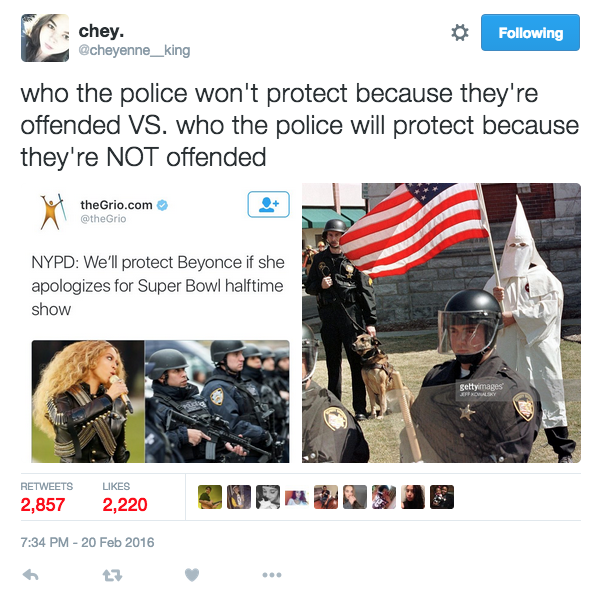 Racial division in the US is an on-going issue, with many encounters involving police and black people.

A study in The Guardian from 2015 shows: “Young black men were nine times more likely than other Americans to be killed by police officers”.

The study also recorded 1,134 deaths at the hands of law enforcement officers in the US in 2015.

But much of the focus remains on the Formation video;  Annabel Brown, 23, who works in music PR, told Artefact “I just think it’s so ridiculous because black culture has been oppressed for such a long time. Black people have gone through so much oppression throughout history, and it is still very present in today’s society.

“We aren’t slaves anymore but everything else has been made more difficult. If you’ve got a certain name, you’ve got to change your name just so you can apply for a job,” she said.

“If you’re a young black boy in America wearing a hoodie and you’re going out, looking a certain way, you are more likely to be shot than a white boy wearing the exact same outfit.

“Also the culture appropriation of our hairstyles and our features, but when black woman have it, its looked down upon. For example, black women with big lips, once was thought to be disgusting, but now the media love big lips. People used to laugh when we were younger because we had big bums but now its all been made the fashion,” Brown added.

“Its all about women sticking together, and showing that black lives matter.”

“Famous white women like the Kardashian’s all have big bums and it’s accepted because they have it. Also with box braids – which is actually a cornrow – when white woman have it, it’s high fashion, but when black women have it, it’s ghetto.”

For Brown, the message of the video is a positive one: “Its all these little issues that come to one. Celebrate, embrace and enjoy different cultures, but do not claim it as your own.

“Beyoncé is highlighting in her video that she doesn’t mind her child having an afro because she’s a child. So why should she put any products in her hair to make it straight and make everyone else happy?”

“The little boy in the video dancing with a hoodie shows that black lives matter and police putting their hands up – she is saying it’s got to stop. To let black kids live, and enjoy their childhood – let them get past 18 without being shot by police or somebody else,” Brown told Artefact.

“She wants to encourage black people to stop being oppressed by the past and instead unite and become as one. That’s why she’s saying she could be a black Bill Gates in the future.

“She isn’t saying she is anti white, all she is saying is we should stop living in the past – we need to start living in the present. Instead of our culture being oppressed, let’s uplift it.”

Featured image by On Aura Tout Vu via Flickr CC